The ECB is, of course, not subject to German law. As an EU institution it answers to the European Court of Justice. But this ruling is binding on the Bundesbank. I doubt that Jens Weidmann, its president, will want to fob off the German judges with a superficial response.

The ruling only allows the Germans to take part in the asset purchase programme for another three months unless they find a way to comply. Theoretically, the ECB could proceed without Germany. But I would strongly advise against it because that could precipitate a eurozone break-up.

Since its 1993 ruling upholding the legality of the Maastricht treaty, the German constitutional court has become more radical. But it avoided outright confrontation, until last week.

I find the most troubling aspect of this ruling is the assertion that the ECJ was also transgressing its competences by approving the bond buying and has gone ultra vires, in the Latin jargon of German constitutional lawyers.

This part of the ruling raises deeply troubling issues for the relationship between the EU and its member states. The German court accepts the principle that EU law overrides national law for areas they specifically recognise lie within the EU’s competence. But they reserve the right to decide whether the EU and the ECJ are operating inside or outside their legal remits. It sets a troubling precedent.

The smartest response to this ruling would be for the EU to address the problems of the eurozone head on: lack of convergence between north and south, debt sustainability and, most important right now, the issuance of mutualised debt to finance a recovery fund.

The emerging reality for EU member states is they gave up the essence of sovereignty when they accepted the idea of a European constitution. They can still go through the motions of national elections and get to issue their own debt but when it comes to big decisions about the fate of their economies, they now have little choice but to fall in line with the ECB.

Commentators have been predicting an ultimate showdown in the EU for years. The big decision about federalism, dissolution or continuing with the status quo might be brought forward as a result this decision. Ultimately, the failure of austerity to harmonise debt to GDP ratios will need to be addressed eventually. That is not something that is being considered at present because of the response to the pandemic but any chance Italy and other debtors were going to get their affairs in order now has to be consigned to wishful thinking.

The answer for the EU will eventually be either a default by a number of heavily indebted countries and their adoption of national currencies again. Alternatively, there will be a debt reset and the inter country debts that have arisen since the foundation of the EU will be cancelled as part of the creation of the federal super state with federal debt issuing powers, pan Eurozone transfer mechanisms and federal taxes. 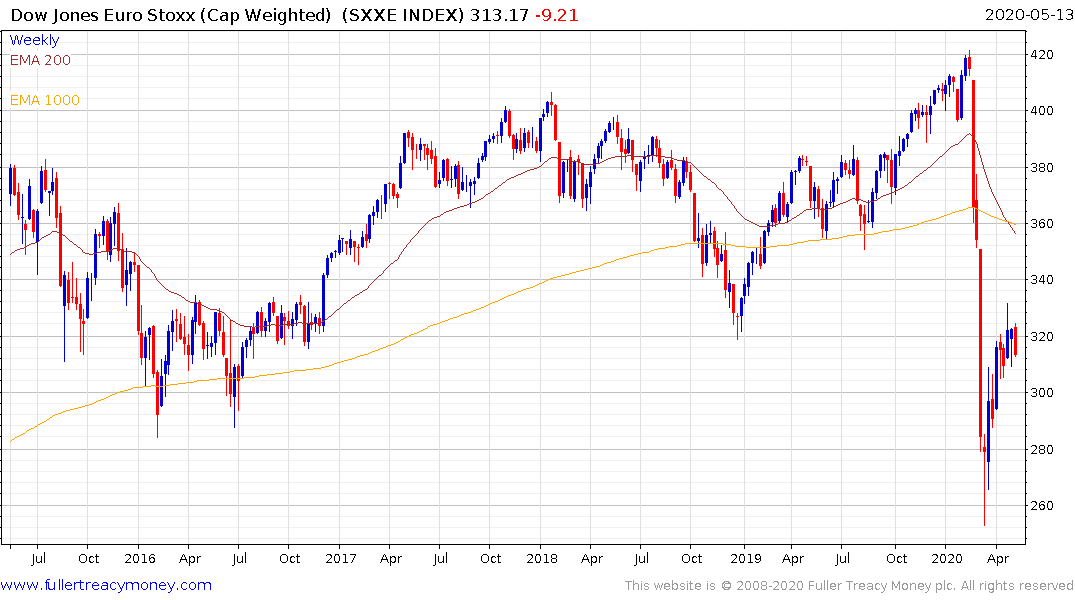 The Euro STOXX Index unwound about a bit less than half its decline over the last couple of months. The rebound has been losing momentum over the last few weeks and support will need to be bound above 250 if support building is to be given the benefit of the doubt. 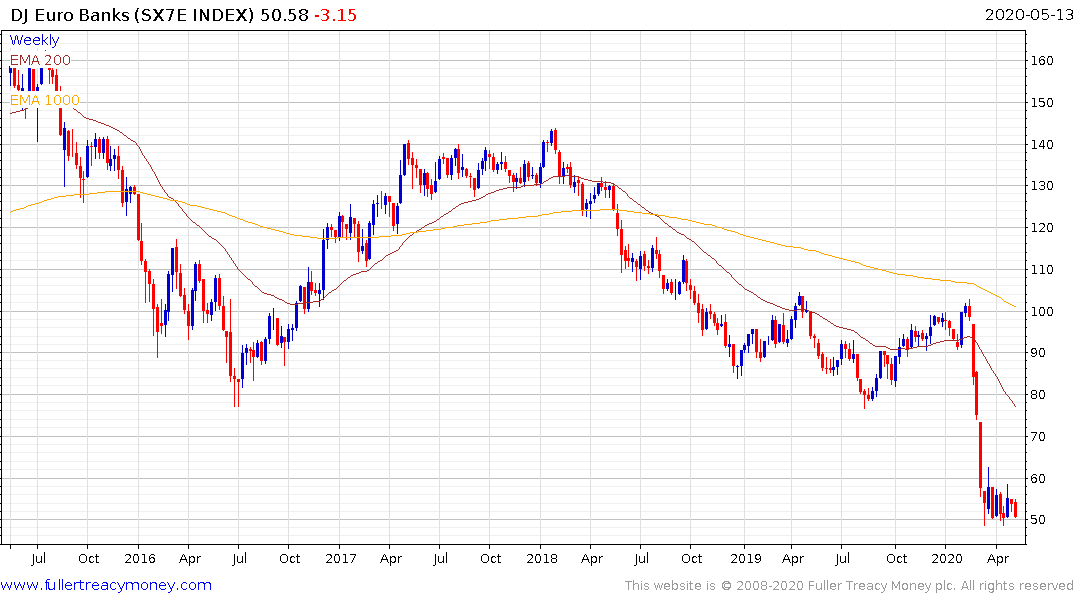 European banks barely bounced and are back testing the region of the lows. With negative rates and rising defaults, it is hard to imagine how the European banking sector is gong to avoid almost total nationalisation.

European countries that held onto their own currencies are at an obvious advantage long-term even as regional blowback represents a near-term risk.