The Diversity of real Assets: Portfolio construction for Institutional Investors
Comment of the Day

The Diversity of real Assets: Portfolio construction for Institutional Investors by Eoin Treacy

We treat gold as a separate real asset type due to its well-accepted role as a store of value. Gold enjoyed more than a 10-fold price increase from the 1970s through its peak reflecting a period of rapid inflation. During periods of inflation uncertainty, investors seek gold as an inflation hedge.41 Similarly, gold may be a good recession hedge. In 2007-2008, while the S&P 500 was down -18.5% gold was up 16.6%, and in 2001-2002, while the S&P 500 was down -17.2% gold was up 12.1%. Investors can invest in physical gold but that incurs storage and insurance costs. Investors can also invest in COMEX gold futures (which trades the gold equivalent of 27m ounces per day). The roll yield on gold futures has been only slightly negative (-0.2% from 1996 to 2017). Investors may also invest in gold mining stocks and can enter into gold royalty agreements. Although gold is an under-owned institutional asset, some institutional investors such as government pension funds have target allocations to gold-related assets (including derivatives).

Gold is a hedge against uncertainty but perhaps most importantly against the worst inclinations of governments to debase their currencies. While there is a clear trend towards that latter point moving into overdrive all over the world, the gold market is notoriously volatile and we still do have a clear idea of what the consistency characteristics of the evolving medium-term trend are going to be.

What we know from past cycles in all assets is an emphatic breakout from a well-defined base is often followed by a period of consolidation mostly above the base. That is what we refer to as a first step above the base. When that range is completed, we can then expect a more rhythmic trend to evolve.

The last decade-long bull in gold was punctuated by 18-month consolidations, with breakouts in Septembers of odd numbered years. When the breakouts occurred, they were particularly powerful on the upside. The trend eventually climaxed with some acceleration in the gold market but undeniable acceleration in the silver market. 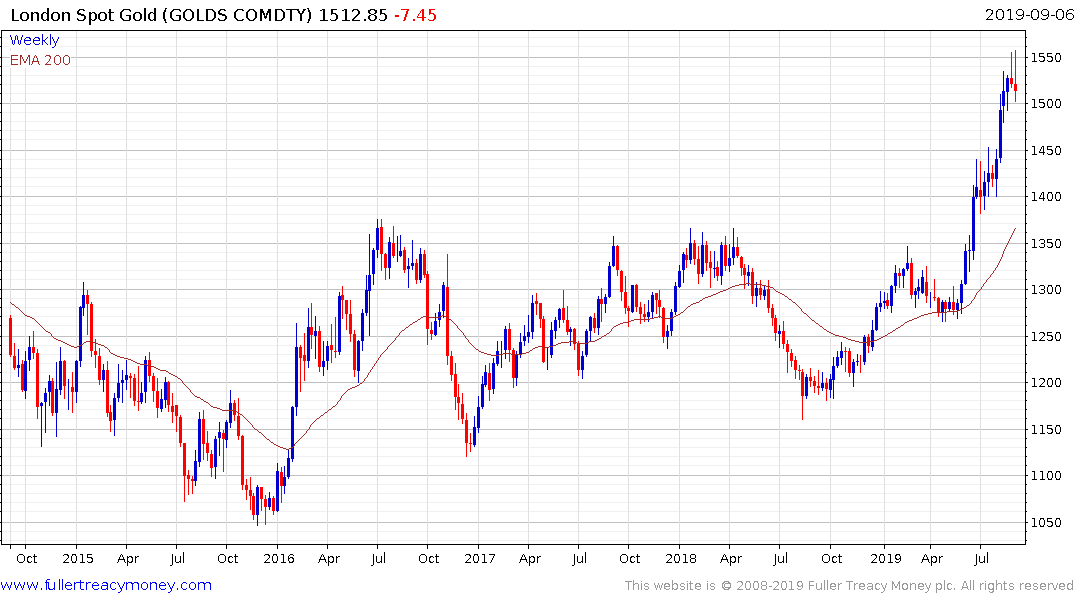 Right now, the precious metals are taking a breather following an impressive breakout but so long as the breakout holds, we can continue to give the medium-term upside the benefit of the doubt.