The clever part is how the network reaches a consensus on what should be written in it. Otherwise there could be thousands of different blockchains, all disagreeing over who owns what.

The idea is that each and every transaction is broadcast by the person initiating it. Rather than telling the bank we want to spend £3, we tell the world. That transaction is bundled up with thousands of others and cryptographically bound into a “block” by “miners”.

Technically, anyone with a computer can be a miner – they just need to install a small piece of software. But it’s not easy to do: far from it.

Bitcoin “miners” are so called because gold miners traditionally have to put in a lot of work before they see any reward in the shape of precious metal. In the world of Bitcoin, miners have to crack an extremely difficult cryptographic problem before they are rewarded with some newly minted Bitcoins. That “block” is then added to the end of the blockchain and shared around the world.

To quote the wiki dictionary maintained by “the Bitcoin community” – perhaps the nearest you can get to an official explanation – “mining is intentionally designed to be resource-intensive and difficult so that the number of blocks found each day by miners remains steady … The primary purpose of mining is to allow Bitcoin nodes to reach a secure, tamper-resistant consensus.”

​In other words, the blockchain remains both public and infallible. It’s a totally reliable and trustworthy record of who owns what, but also who owned what back through time, all the way to the creation of Bitcoin.

To describe bitcoin as a currency is to miss the point somewhat with regard to what the development of cryptocurrencies means. The blockchain is a facilitator of transactions whether financial, services oriented or communications. In essence it is a ledger anyone can access where anything can be recorded and archived.

For the time being this sector remains the preserve of highly capable computer scientists. However, the appeal of cutting costs and getting an edge on their competition ensures that corporations will seek to adapt the blockchain to suit their own purposes and will create new products to benefit from it.

For example Expedia today announced it will accept bitcoin as payment for hotel stays. 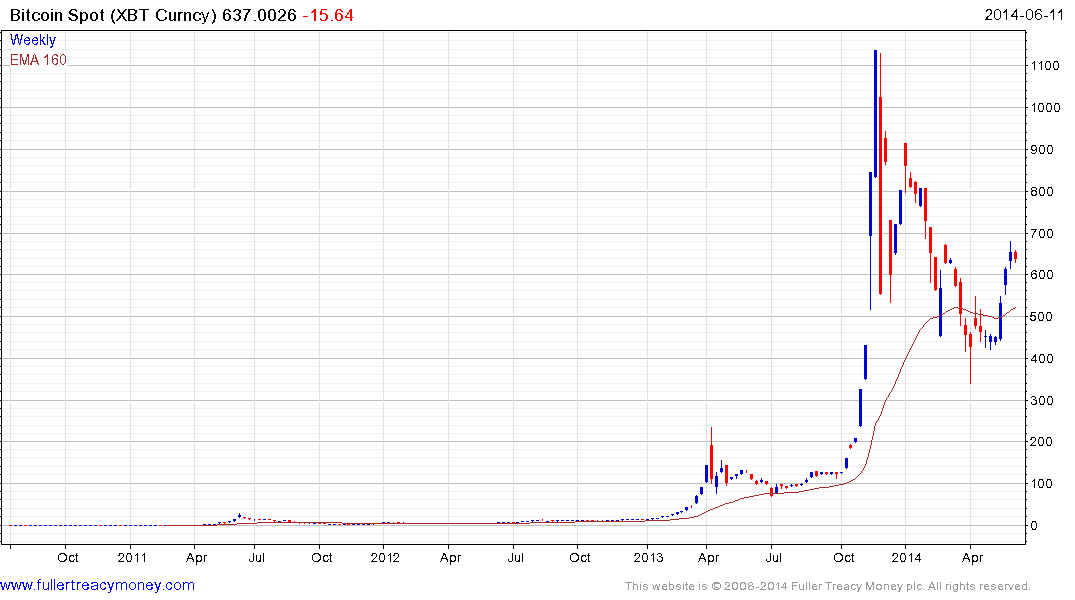 I added the Bitcoin spot chart to the library so subscribers can track the currency’s movements as it evolves. The blowout rally of late 2013 has been at least partially unwound with 400 bitcoin representing a least a temporary floor.