It was a pleasure, as always, to spend time discussing the outlook for the markets in a convivial environment where experienced delegates shared their considerable knowledge of various sectors. Perhaps the most important question discussed was whether we are in the latter stages of a cyclical bull or the early stages of a secular bull?

We have persistently pointed out that there are signs the cyclical bull market, which has been in evidence since the 2009 lows, is maturing. The liquidity on which it has depended is slowly tapering. The outperformance of IPOs over the last 9 months is generally a late-in- the-cycle phenomenon. The concurrent motivation of private equity groups to list is a similarly caution inducing development. Delegates reported that last year¡¯s impressive performance has resulted in retail investors finally concluding that the time is right to be fully invested. Money managers I have spoken to report having removed hedges in order to avoid underperforming this year.

Generally speaking, when investors begin to cast around for cheap sectors in which to participate it reflects a paucity of "cheap" sectors and cyclicals often stage a powerful catch up play. This may now be unfolding. All of this suggests the cyclical bull market is mature and that the risk of a larger pull back than we have seen in the last 12 months is non-trivial.
If we take a longer-term perspective there is significant cause of optimism. The global middle class continues to expand at a prodigious pace, supporting a growth trajectory in demand for just about everything. We are living in a golden age of technological development which is creating the very real potential for productivity growth in the wider economy. The evolution of unconventional oil and gas as well as the increasing pace of innovation in solar technology supports the view that energy prices will trend lower in inflation adjusted terms over the next decade. Additionally major global indices such as the S&P500 have broken up out of more than decade-long ranges. 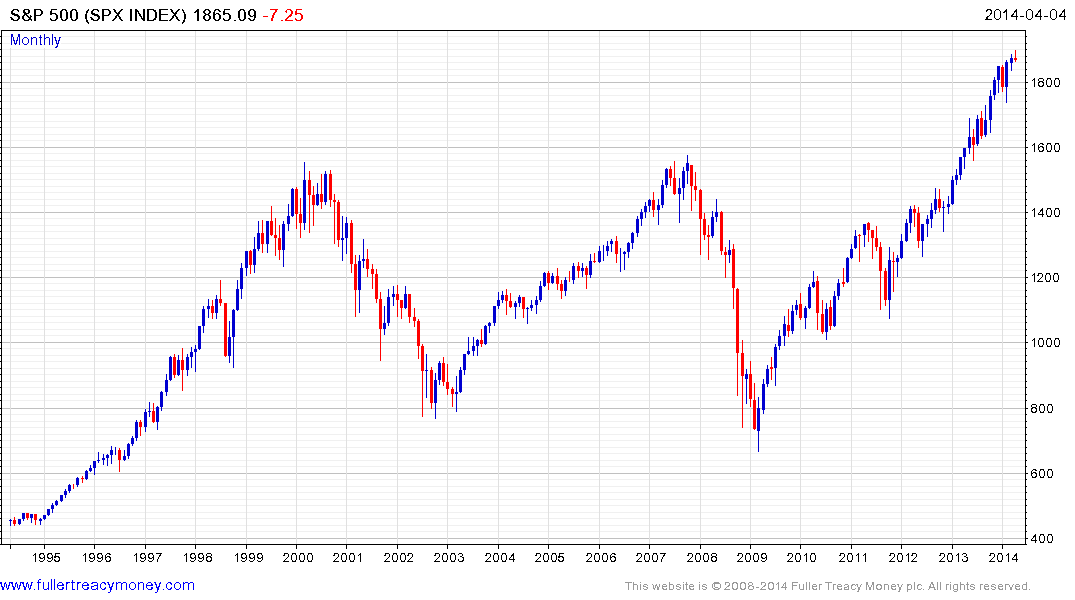 As we discussed at The Chart Seminar, ranges are explosions waiting to happen and it is not unusual for markets to form a first step above the base once a breakout has run its course. When we take the somewhat competing arguments above into account, the potential for a first step above the base to form as monetary policy is normalised remains our base case. This suggests that a test of the upper side of the underlying trading range, somewhere in the region of 1550 to 1600 on the S&P500, cannot be ruled out.