The Case for Deeply Negative Interest Rates
Comment of the Day

The Case for Deeply Negative Interest Rates by Eoin Treacy

Now, imagine that, rather than shoring up markets solely via guarantees, the Fed could push most short-term interest rates across the economy to near or below zero. Europe and Japan already have tiptoed into negative rate territory. Suppose central banks pushed back against today’s flight into government debt by going further, cutting short-term policy rates to, say -3% or lower…

,,,A number of important steps are required to make deep negative rates feasible and effective. The most important, which no central bank (including the ECB) has yet taken, is to preclude large-scale hoarding of cash by financial firms, pension funds, and insurance companies. Various combinations of regulation, a time-varying fee for large-scale re-deposits of cash at the central bank, and phasing out large-denomination banknotes should do the trick.

This is the economic equivalent of “use it, or lose it” when applied to money. The idea of forcing banks, pensions and insurance companies to invest is fine on paper but takes no account of the credit worthiness of the assets being purchased. The time to institute this kind of policy is after a major decline when bankruptcies have washed away high leverage and investors need an incentive to speculate. At today’s valuations, where asset prices have already been rising for 12 years, forcing speculation is a recipe for an asset bubble of epic proportions.

Meanwhile the banking sectors of Japan and the Eurozone have been eviscerated by negative interest rates. Rogoff would argue that is only because it has not been done correctly. The alternative is moving into negative territory completely upends the convexity of the bond market which results in massive mispricing of the whole sector.

The further the world goes towards the ultimate solution of universal zero interest rates and government bonds at zero yields, the more risk inflation represents. Debt servicing costs have been contained by low interest rates but the massive increase in debt represents acute leverage to inflationary pressures.

Food shortages, supply chain interruptions, demands for danger pay and living wage demands, and deglobalisation all represent inflationary pressures in the medium-term. The economy is still contracting at present and velocity of money is still low. The primary risk when growth begins to recovery will be the stickiness of these potential inflationary pressures. That suggests deglobalisation and wage demands are the two biggest risks for the second half of the year.

This report from Ashmore debunks other big suggestion Rogoff makes which is to forgive emerging market debt. Set aside for a moment the fact that impoverished countries are obviously in need of some assistance at the best of times and consider that China represents more than half of all emerging market debt. I don’t think anyone is seriously considering cancelling it. 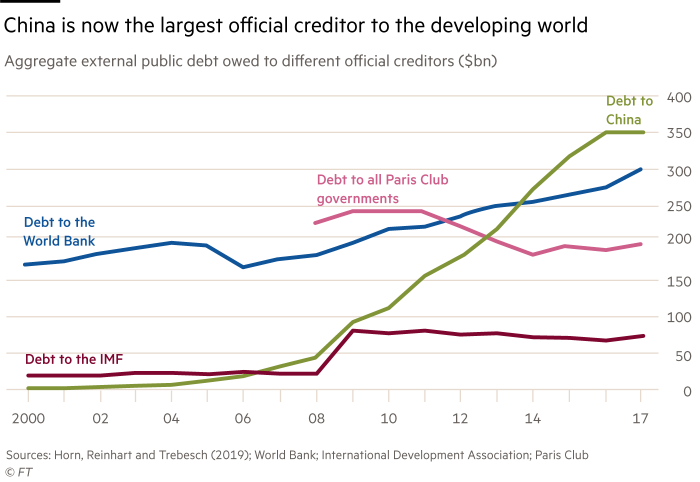 On top of that, China is now the largest official creditor to other emerging markets. The Belt and Road Initiative was designed to trap weaker countries in debt servitude so they are unlikely to be interested in forgiving loans.