At its heart, the rotation is based on the idea that there’s a lot of money in the economy waiting to be spent on things besides video streaming and online shopping. The U.S. personal savings rate was 7.2% at the end of 2019. By April it had surged to 33.7%, and it was still 13.6% in October—almost double where it started the year. Deposits at U.S. commercial banks swelled to almost $16 trillion in November, up from $13.2 trillion at the end of last year. If consumers revert to their pre-pandemic ways, that could set off what Jim Paulsen, chief investment strategist for the Leuthold Group, has called “a growth bomb,” as companies gear up to replace lean inventories.

Fund managers with a value bias say there are still opportunities to take advantage of the change in investors’ tastes. Chris Davis of Davis Funds points to the banks Wells Fargo & Co. and Capital One Financial Corp., whose prices were hammered when lockdowns began in March and still haven’t fully recovered. Davis thinks investors have overlooked how banking regulations enacted after the global financial crisis have made these lenders better able to handle recessions. “When you look at their valuations, the amount of cash they produce, the capital ratios that they have, the reserves they’ve been able to put up—they really have this characteristic of resilience and durability, and yet are priced at this sort of shockingly low level,” he says.

Value has outperformed growth over the last month and yields have been rising. That’s not a coincidence. Value metrics need a discount rate against which to make comparisons while growth sectors tend to do best when interest rates are low.

Investors are logically wary of the threat of obsolescence when looking at the value proposition. Many companies that have attractive valuations may not be able to recover as the economy evolves into new areas. It’s hard to make that argument about banks. They are among the primary beneficiaries of rising yields because their business model prospers as the yield curve steepens. At present they are paying nothing on deposits but are accumulating fees on every service they provide.

A significant effort is also underway among banks to accumulate reserves. Capital One has been offering outsized returns on money market funds for corporates. I received incentive offers from both HSBC and JPMorgan in the last month offering one-off cash bonuses for chunky new money deposits. That reserve accumulation is aimed at ensuring the sector survives the end of the foreclosure moratorium.

For many of the recovery candidates the winding down of regulations designed to forfend collapse represent the biggest uncertainties of the first half of 2021. That is when the resource accumulation that has gone on through corporate bond issuance and drawing down of credit lines will truly be tested. The biggest positive for the US banking sector is it has already been through a lengthy process of being forced to become resilient. With that process in the past rather than the future they are in a strong position to prosper as the recovery takes shape. 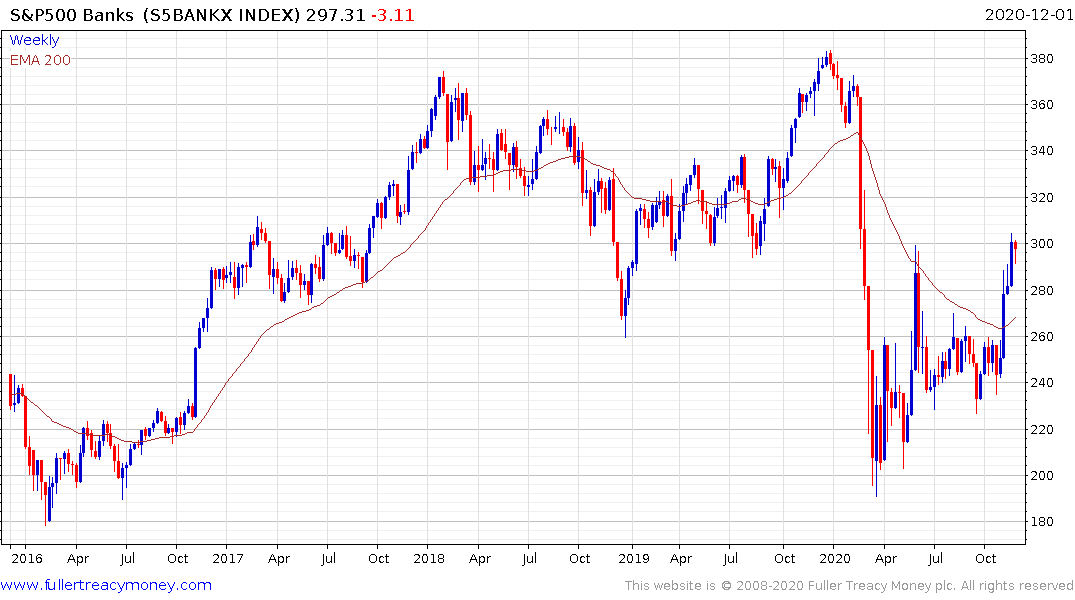 The S&P500 Banks Index remains on a recovery trajectory. It is unlikely to be the best performing sector but a healthy financial sector is a major component for a recovery economy. 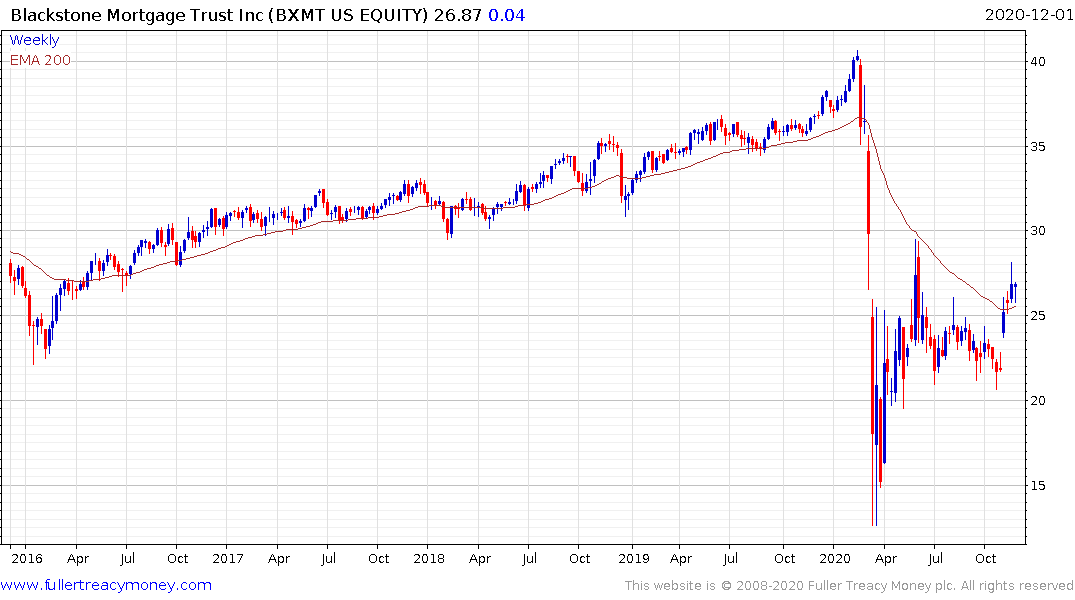 Mortgage REITs are a yield curve steepening play on steroids. The Blackstone Mortgage Trust is currently firming above its March lows.

The big question for investors is how much the yield curve is likely to steepen. Every 100-basis point advance has a significant negative impact on the ability of the US government to service the debt. That ensures either every effort will be made to contain a rise in long-term yields or the government will print however much money as is required to pay down the debt regardless of the yield. Either way it is Dollar bearish but banks will likely see wider margins.