The Bond Question by Eoin Treacy

Convertibles have been one of the best performing types of bond fund in 2013 because they offer a blend of yield and optionality on the equity markets. This helps to emphasise just how much equities have outperformed this year but also highlights an issue many investors now face. What do we do with the bond component of our portfolios? 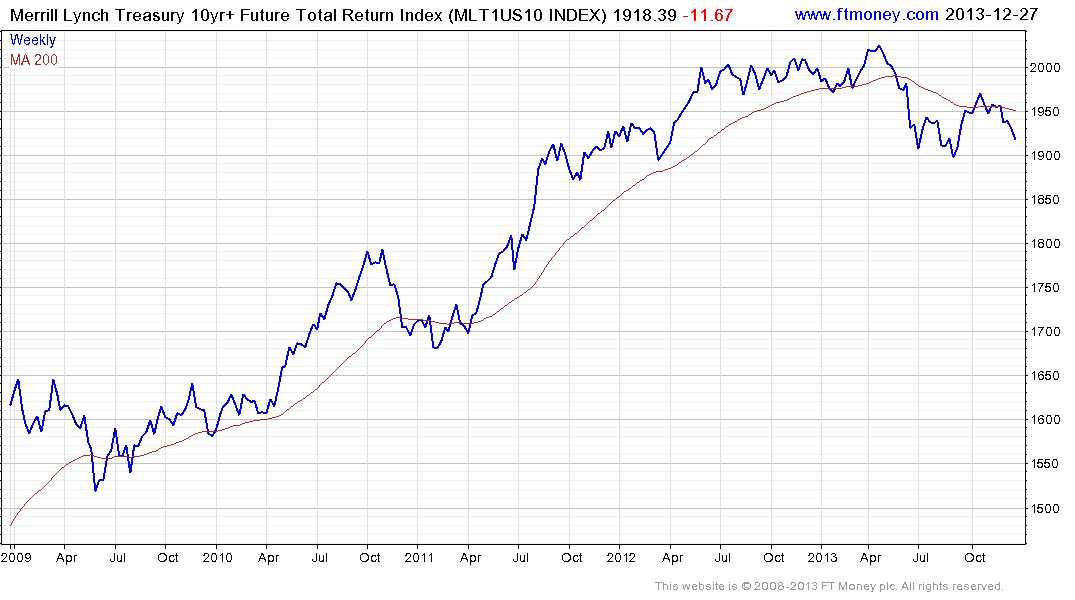 For the last few years we have highlighted the fact that the Merrill Lynch 10-yr+ Treasury Futures Index is one of the best barometers of the health of the Treasury market The fact that it has evolved from one of the most consistent uptrends in the world to displaying top formation completion characteristics is not something any investor can ignore because what happens in the bond markets tends to have wide ranging implications.

Pension funds must hold bonds. Investors who wish to lock in a yield with low volatility in the base instrument have tended to favour bonds. The liquidity and size of the market are additional positive considerations for many investors.

The advent of QE prolonged the life of the secular bull market in Treasuries by substituting yield for capital appreciation in the make-up of the sector's total return. This momentum fuelled advance ended in May and resulted in a sharp drawdown in the value of bond investments. This at least partially helped to fuel the advance in equities as fund transfers increased. 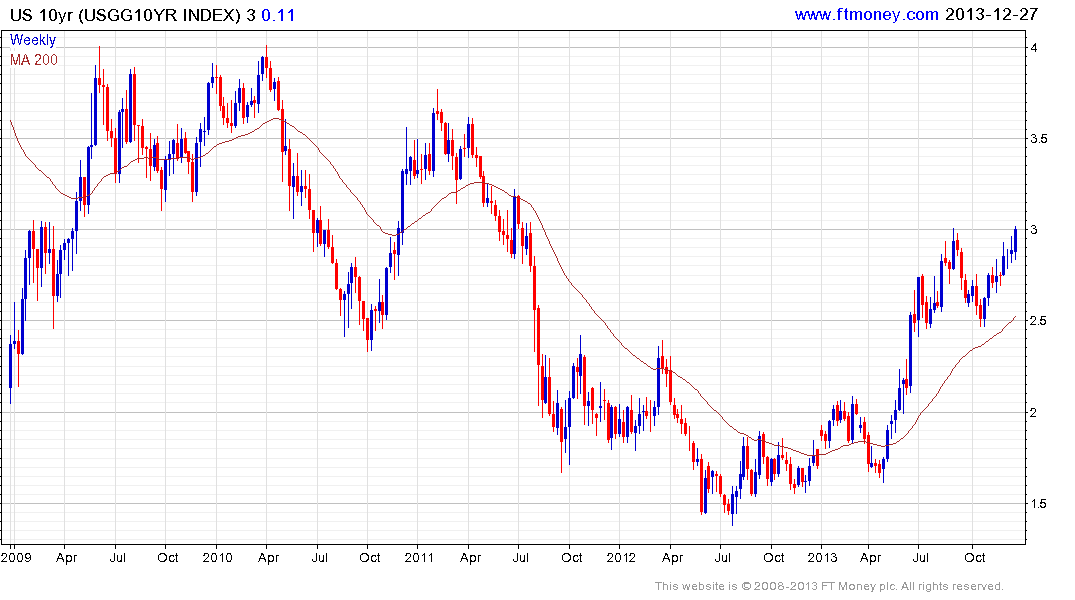 10-year Treasury yields are currently testing the psychological 3%, but do any of us think that 3% is a reasonable rate of return over a 10-year timeframe? 2023 may seem like a distant horizon right now but it would be surprising if the Fed Funds Rate does not increase to at least that level within the decade. Therefore we can reasonably expect yields to continue to rise albeit in a choppy fashion. 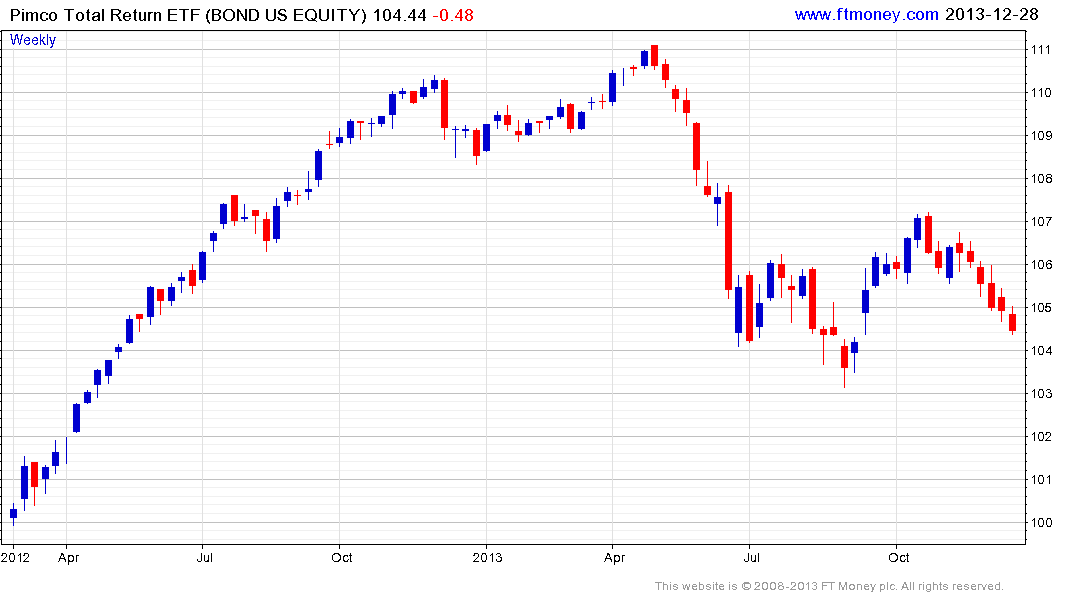 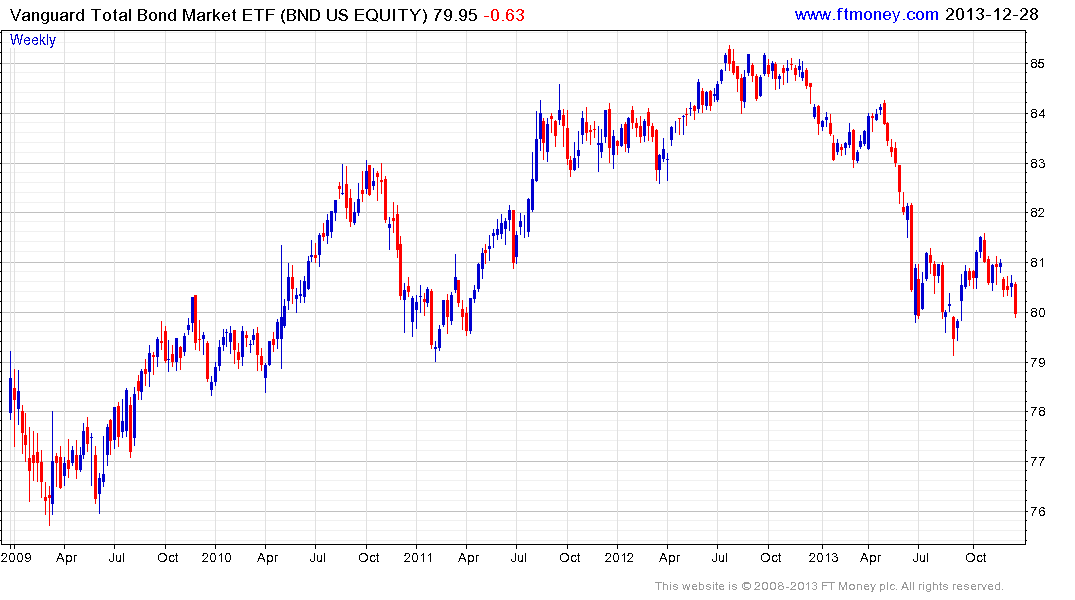 The Pimco Total Return Bond ETF (BOND) has a duration of approximately 7 years and has a relatively similar pattern to the Merrill Lynch Index above. The Vanguard Total Bond Market ETF (BND) also shares this pattern. As two of the world's largest actively managed bond funds the transition from a reliance on capital appreciation to emphasising yield is likely to result in at least a choppier performance. 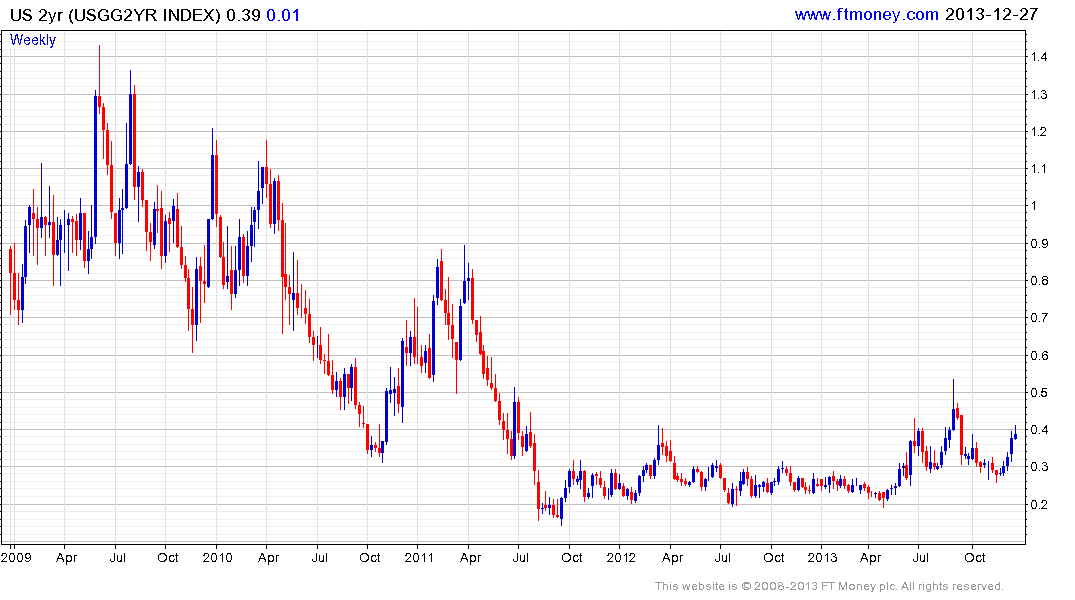 2-year Treasury yields are perhaps more relevant to 2014. The low absolute level of short-term interest rates, Fed guidance that rates are not about to jump anytime soon and momentum have all contributed to a relatively static environment at the short end of the curve since late 2011. However this is changing. If the Fed continues to taper QE by $10 billion a meeting, the prospect of rates rising by the beginning of 2015 will increase and yields at the short end of the curve will rise commensurately.

Many investors have looked on the short end of the curve as a safe haven offering low volatility and a reasonably secure but low yield. These calculators from Bloomberg demonstrate that the effect on price of a move from 0.4% to 1% in the benchmark 2-year bond yield would result in a 1% deterioration in prices. This suggests that convexity is likely to play more of a role in risk bond management systems in 2014.

If one can no longer rely on capital appreciation to pad performance, alternative strategies need to be pursued.

An aggregate approach offers the security of a Treasury investment but the additional performance that might be gained from corporate bonds. The Ave Maria Bond Fund is one of the better performers in this class and remains in a consistent uptrend. 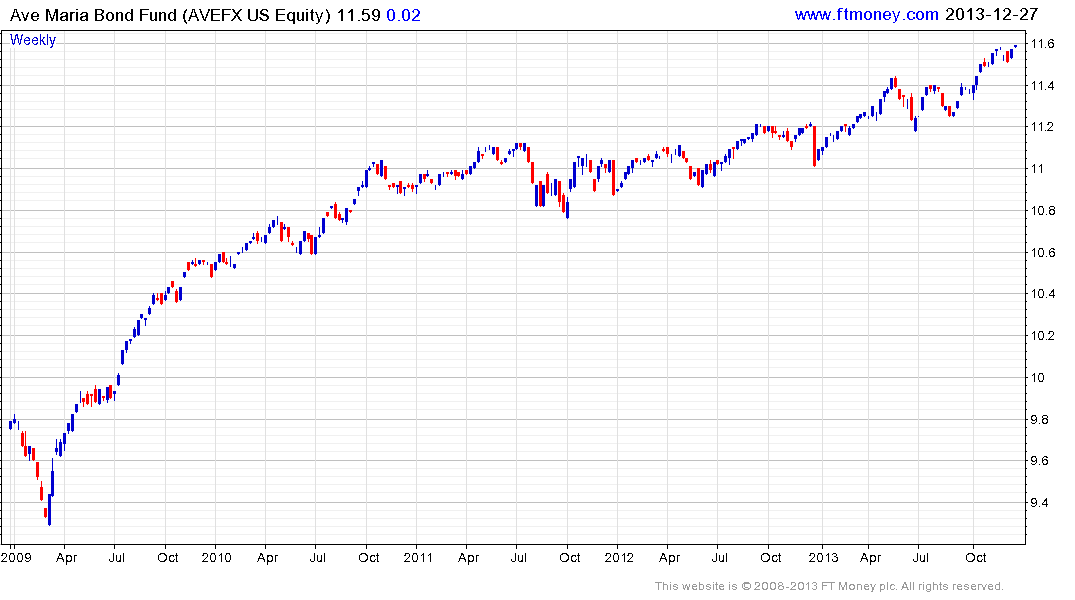 Floating rate notes offer exposure to rising interest rates and should therefore respond favourably as perceptions of when central banks might begin to raise short-term interest rates change. The iShares Floating Rate Note ETF has been relatively static for much of 2013 but has upside potential as the potential for rising rates is reassessed. 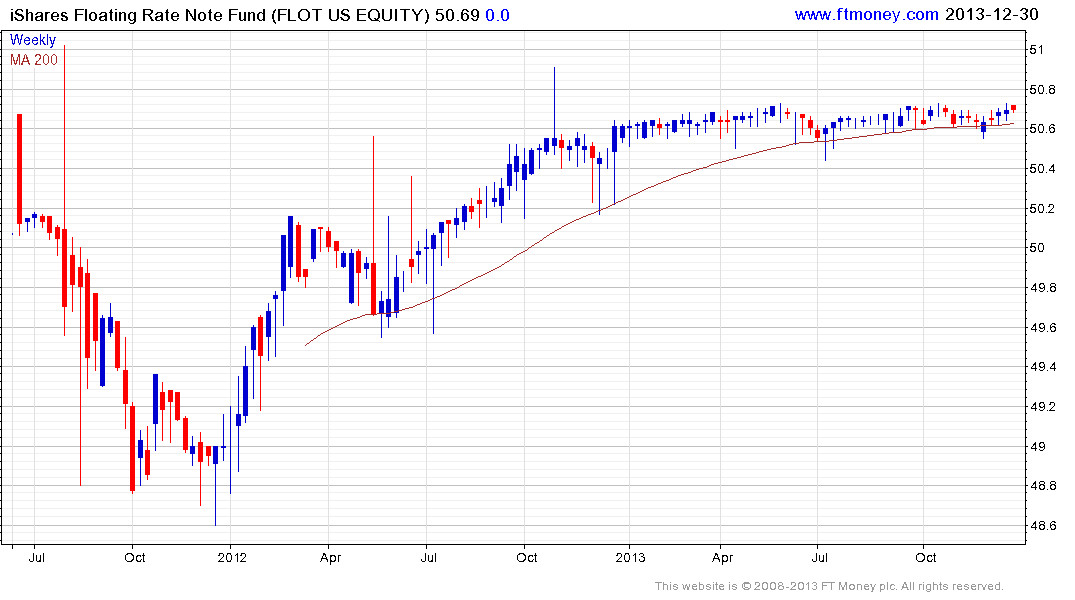 In the tax exempt sector, municipals reacted negatively in May as speculation increased that the Fed may begin to taper. The enhanced return achieved by avoiding taxes represents a powerful allure for investors but it is questionable whether bond funds offer the best mechanism to achieving this benefit since they are more influenced by capital appreciation than yield. Holding individual bonds on a yield-to-maturity basis may be a more suitable way to interact with the market than ETFs as the consequences of the end of QE are digested. 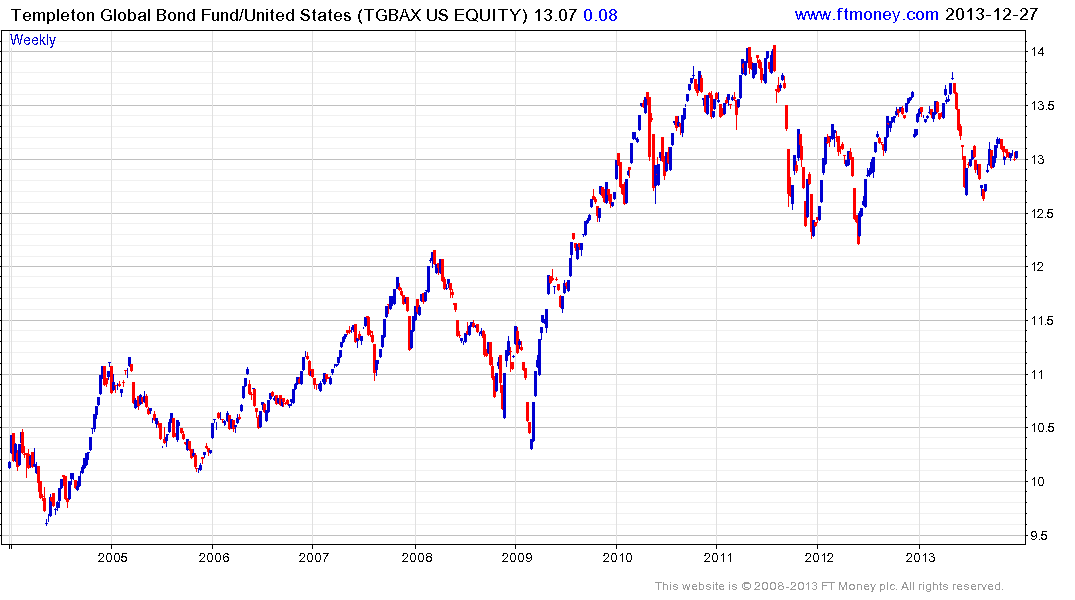 The debt of creditor nations might reasonably be expected to outperform that of debtors. This was certainly the case from 2009 as global bond funds rallied powerfully following the credit crisis and lost momentum from 2011 following a compression in yields. The Templeton Global Bond Fund offers a good example of this. It lost momentum somewhat over the last couple of years but has firmed within its range and a sustained move below 12.5 would be required to question medium-term scope for continued higher to lateral ranging.

The global fixed income landscape is likely to change profoundly over the next few years as monetary policy is gradually normalised. I regard the above commentary as an initial foray into an assessment of potential investments and would welcome additional thoughts from informed subscribers.