The Big Cycles Over The Last 500 Years by Eoin Treacy

In brief, after the creation of a new set of rules establishes the new world order, there is typically a peaceful and prosperous period.  As people get used to this they increasingly bet on the prosperity continuing, and they increasingly borrow money to do that, which eventually leads to a bubble.  As the prosperity increases the wealth gap grows.  Eventually the debt bubble bursts, which leads to the printing of money and credit and increased internal conflict, which leads to some sort of wealth redistribution revolution that can be peaceful or violent.  Typically, at that time late in the cycle the leading empire that won the last economic and geopolitical war is less powerful relative to rival powers that prospered during the prosperous period, and with the bad economic conditions and the disagreements between powers there is typically some kind of war.  Out of these debt, economic, domestic, and world-order breakdowns that take the forms of revolutions and wars come new winners and losers.  Then the winners get together to create the new domestic and world orders.

That is what has repeatedly happened through time.  The lines in the chart signify the relative powers of the 11 most powerful empires over the last 500 years.  In the chart below you can see where the US and China are currently in their cycles.  As you can see the United States is now the most powerful empire by not much, it is in relative decline, Chinese power is rapidly rising, and no other powers come close.

There is a clear message here. Empires rise and fall. Empires rise because of a competitive advantage. Success breeds hubris which sows the seeds of decay. Success also breeds decadence with societies spending beyond their means. All the while competitors learn to emulate the competitive advantage and iterate upon it. As a result, they gain strength, confidence and a willingness to challenge the status quo.

There are two big lessons here. The winner of the war writes the history. When war comes, you had better win. The alternative is ceding power and influence to the victor, a massive repricing of financial assets, and some loss of control of internal affairs is also a distinct possibility.

The second is China has been through more dynasties than anyone else. The Communist Party describes other competing powers as paper tigers but the fragility of totalitarian regimes only ever seems to be appreciated in retrospect. 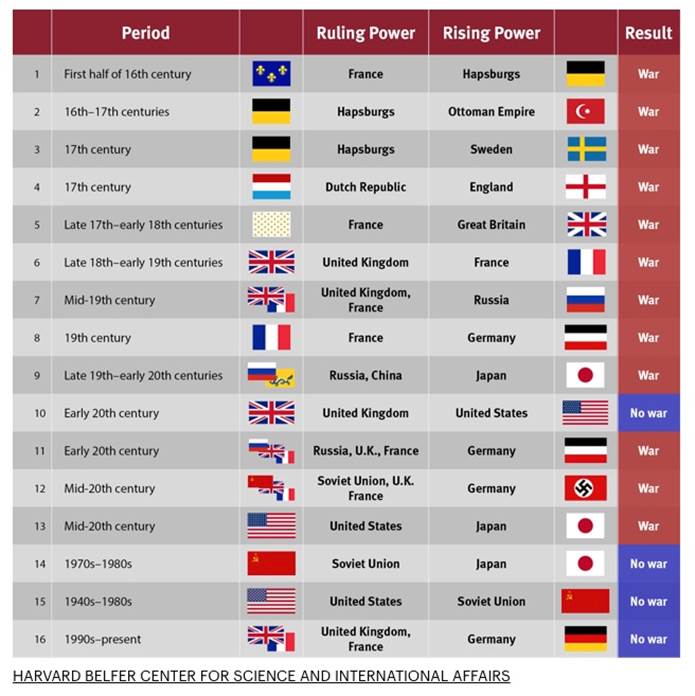 The Thucydides trap was widely circulated a few years ago. However, the majority of instances where great powers did not clash have occurred after the nuclear age. Mutually assured destruction has ensured relative peace for the last few decades. However, it is also worth remembering that the Vietnam war occurred while China was a nuclear power. The first country to come up with a new technology that defrays the risk from nuclear weapons will have a significant advantage in the great game.

Until that point, there remains clear potential for relations to deteriorate further.