The Bank of Japan’s two-day policy meeting ends Wednesday, with investors anxiously awaiting the outcome of a comprehensive policy review that may set the future course of Governor Haruhiko Kuroda’s monetary stimulus program.

The biggest questions for many are whether the BOJ is willing to increase the record scale of its asset purchases or to cut its negative interest rate further. By doing neither at recent meetings, even as some consumer prices were falling, Kuroda and his board have fueled speculation that the BOJ’s main policy tools are running up against their limits. Taking little or no action today risks reinforcing that view.

A narrow majority of economists surveyed by Bloomberg expect the BOJ to announce expanded stimulus. Most of the rest forecast action in November, December or next year, while a few predict no additional easing at all. Any weakening of the BOJ’s commitment to push further with stimulus is likely to force the yen higher and weigh on stocks, while a boost from Kuroda may soften the currency and underpin Japanese shares.

The essence of the Bank of Japan’s commitment to hold JGB yields at 0% is that it is willing to monetise as much debt as is needed to stimulate asset price inflation in the wider economy which it hopes will lead to economic growth.

In tomorrow’s announcement the question will be to what extent they are willing to prolong monetary accommodation. The potential for both Europe and Japan is that their respective central banks are slowly abandoning limits on quantitative easing. If that does indeed occur there is the possibility that this transition would mark the equivalent of the US style QE3 for those markets; suggesting breakouts would be sustained. Japan is definitely leading at present. 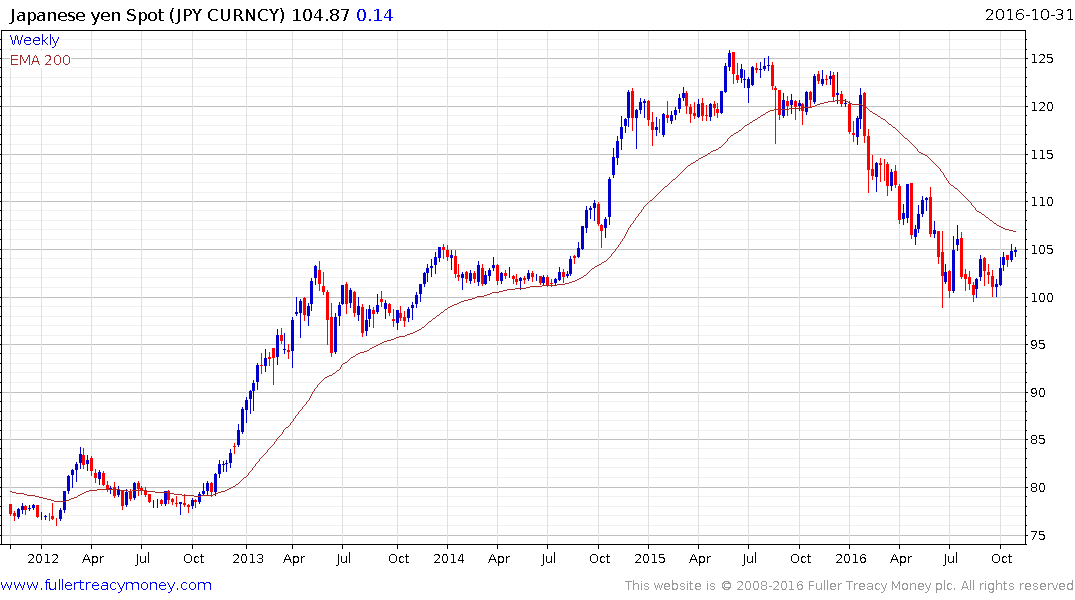 The Dollar has almost unwound an oversold condition relative to the trend mean but it will need to sustain a move above the 200-day to confirm a return to demand dominance beyond the short-term. 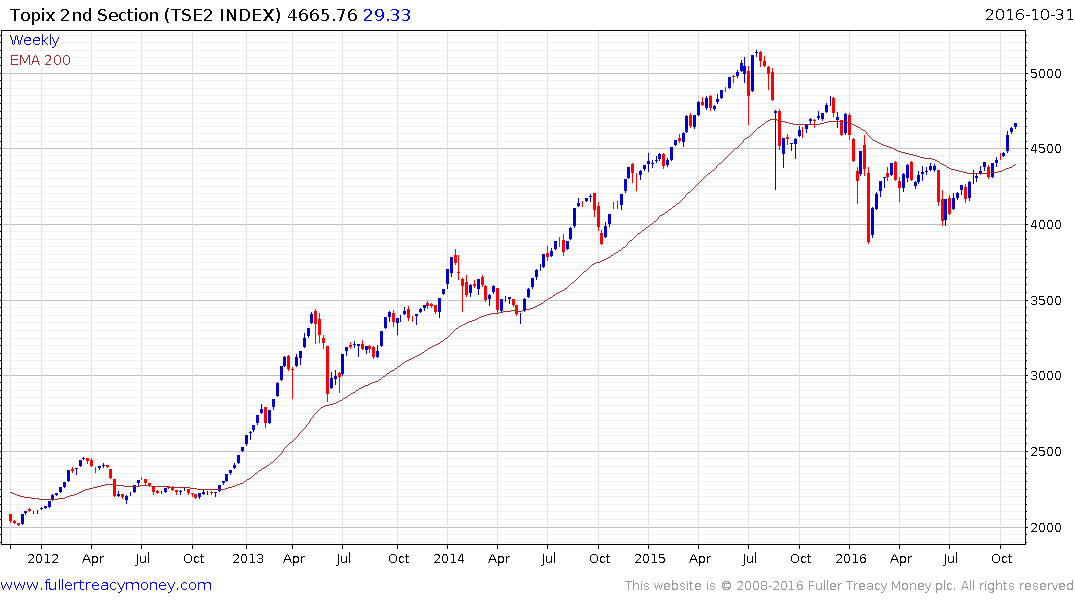 We have often referred to the Topix 2nd Section as a lead indicator for the wider market and it broke out to new recovery highs seven weeks ago. While somewhat overbought in the short term, a sustained move back below the trend mean would be required to question medium-term recovery potential. 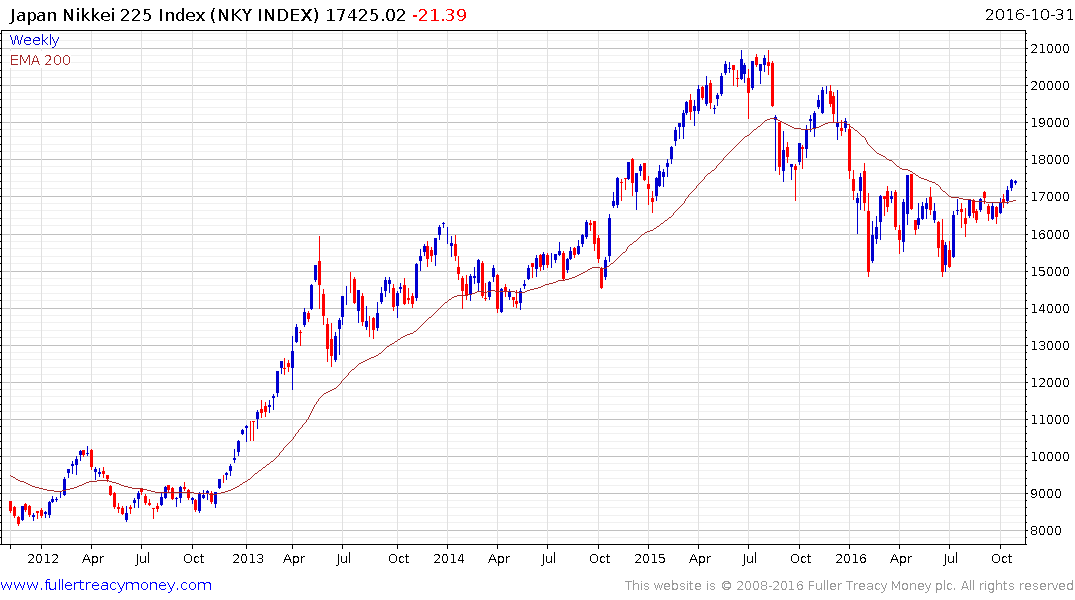 The Nikkei-225 has now cleared the 17000 level and will need to hold its breakout if the benefit of the doubt is to be given to recovery potential. 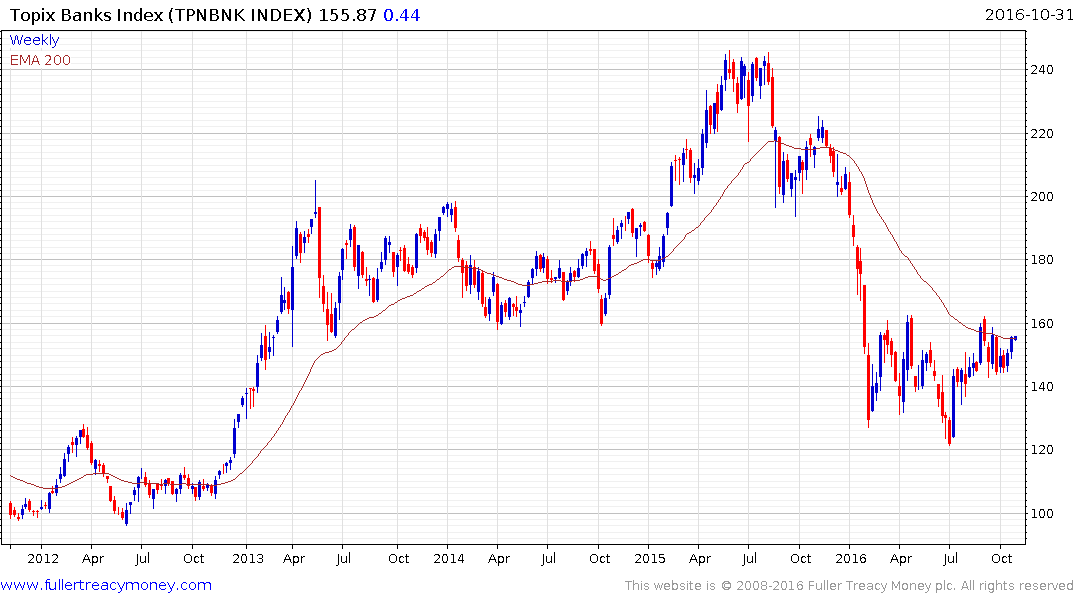 The Topix Banks Index remains a laggard but is testing the upper side of a six-month range and will need to sustain a break to new recovery highs to signal a return to demand dominance beyond the short term.