The Apple v. Epic Decision
Comment of the Day

Judge Gonzales Rogers does note that it is unclear whether Google “could increase output in the short run in order to erode Apple’s market share”, but the real problem is that Google is content to simply share the market with Apple and earn their own supracompetitive commission rate.

As a child I enjoyed going to the horse races with my uncles during the summer. With the limited resources of my pocket money, I figured I could come out ahead by betting the 2nd favourite would place in the top three. Place bets are conservative but all I was interested in was walking away with more than I entered. It didn’t work every time but it worked enough for me to buy what I wanted with the profits.

Google appears to be willing to come 2nd in many races so long as it is not coming third. That’s a smart choice since it avoids the media attention of leadership while providing near monopoly type benefits. Meanwhile, the company devotes significant assets to being the leader in emerging technologies where there is no easily identifiable market like artificial intelligence, quantum computing and autonomous vehicles. 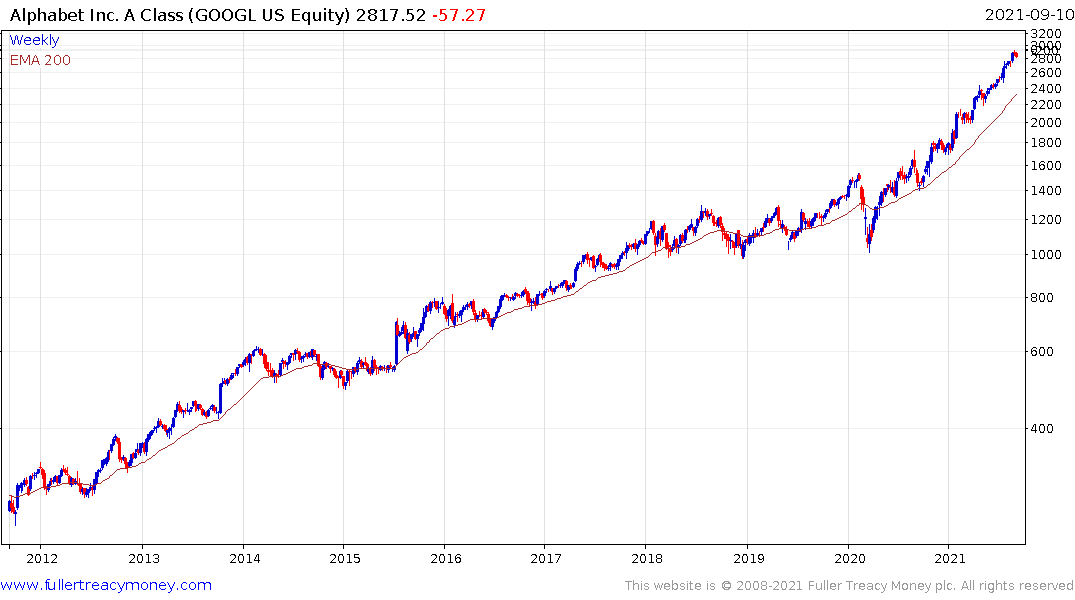 The share remains in a steep but consistent uptrend; characterised by a succession of short-term range one above another. It is currently firming from the upper side of the most recent range and a sustained move below $2800 would be required to question scope for continued upside.

The challenge over the medium-term is the trend is unquestionably accelerating. Even on a log scale chart there is clear evidence of the pick up in enthusiasm for the share. Therefore, this is the time to be particularly attuned to the consistency of the trend.

The market cap of the FANGMAN group of shares is back to 20% of the total for the whole market and continues to trend higher.