The Anatomy of a Rally
Comment of the Day

The Anatomy of a Rally by Eoin Treacy

Questions like these can’t tell us for a fact whether an advance has been reasonable and current asset prices are justified. Buy they can assist in that assessment. They lead me to conclude that the powerful rally we’ve seen has been built on optimism; has incorporated positive expectation and overlooked potential negative; and has bene driven largely by the Fed’s injections of liquidity and the Treasury’s stimulus payments, which investors assume will bridge to a fundamental recovery and be free from highly negative second-order consequences.

A bounce from the depressed levels of late March was warranted at some point, but it came surprisingly early and quickly went incredibly far. The S&P500 closed last night at 3,133, down only 8% from an all-time high struck in troubled-free times. As such, it seems to me that the potential for further gains from things turning out better than expected or valuations continuing to expand doesn’t fully compensate for the risk of decline from events disappointing or multiples contracting.

In other words, the fundamental outlook may be positive on balance, but with listed security process where that are, the odds aren’t in investors’ favor.

The rise of earnings-agnostic investing has been a trend which has defined the bull market since 2008. Every major bull market thrives on a financial innovation. It would be tempting to think that in this case it was cryptocurrencies, but the answer is probably more mundane. ETFs have enabled factor investing and promoted the acceptance of Modern Monetary Theory. They have allowed companies like Blackrock and Vanguard to become titans of Wall Street on the back of value-agnostic investing.

Sober investors who concentrate on value are becoming afraid of heights. Less experienced traders are rushing and the flood of liquidity is supporting this move. Personally, I feel deeply conflicted. I was eager to point out the deep valuation discounts present in March and spent long hours highlighting opportunities.

I was much less enthusiastic as the Nasdaq approached its peaks and the S&P500 tested the 3000 level. I was expecting a pullback and underappreciated the willingness of the monetary authorities to step in with support after even a modest retracement. However, that did help to convince me that this advance is primary fueled with liquidity. We may yet see a significant pullback towards the March lows but a significant threat of further economic damage and less monetary and fiscal assistance would probably be required to catalyse such a move.

The size of the Fed’s balance sheet contracted last week. That’s not something I was expecting either but it is likely to cap the potential for stocks to continue to advance until it expands again.

The rebound in the Dollar over the last week has also resulted in the total assets of central banks chart contracting. 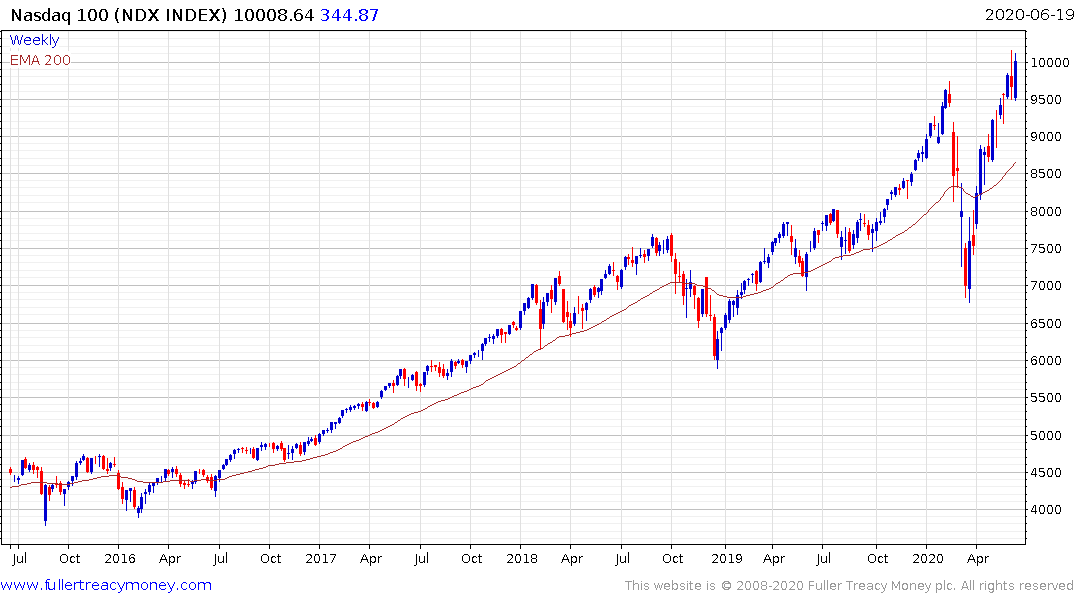 The Nasdaq-100 is pausing again at the 10,000 level but it has ample room to consolidate. 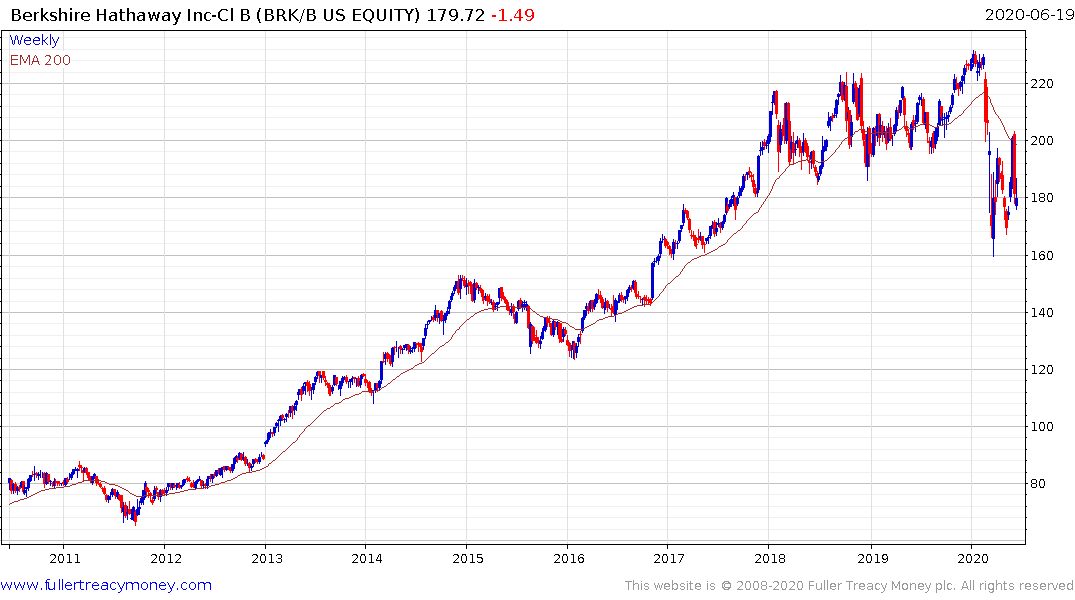 Berkshire Hathaway has type-2 top formation with right hand extension characteristics. At the very minimum a multi-month period of ranging and remedial action will be required to repair damage to the uptrend.