The Agony & The Ecstasy by Eoin Treacy

As mentioned in the Health Care section on page 23, while 2000-2001 was the peak distress period for biotech and life science companies, there has been a steady drumbeat since, with over 100 biotech and life science catastrophic loss events since 2002 (see bar chart). We referenced earlier research showing that even when a drug finally gets to Phase 3 trials, the probability of failure can still be as high as 50%. One possible emerging challenge for the biotech industry: patent trolls. For funding and other reasons, some universities are under pressure to monetize their patents by transferring rights to “assertion entities”. As per a 2014 paper from the University of California Hastings College of Law, as these patent sales take place, the risk to biotech and pharmaceutical companies with existing products on the market increases dramatically. Such patents can cover active ingredients of drugs, methods of treatment, screening methods to identify new drugs, manufacturing methods and dosage forms.

In the table, we show some of the more recent catastrophic losses (companies reaching the 70% decline threshold in 2012 or 2013). Biotech companies can experience periods of depressed stock prices as trials fail or have to be rerun, with some surging when/if success eventually occurs, or when they are bought by larger companies. As a result, the table below captures catastrophic loss at a point in time (Spring 2014), and does not represent a final assessment of each firm’s future prospects.

This is a useful report laying out the argument for a diversified approach to long-term investing while also highlighting just how much leaders outperform. A central part of the thesis we developed following the credit crisis was to rely on leadership and to favour pre-eminent companies within their respective sectors. Part of the reason for this is because capitalism trends towards concentration. This favours large companies that have the wherewithal to acquire emerging technology and the best assets of troubled competitors. As the report details, the majority of shares perform unremarkably while the leaders lead by a considerable margin. That is why we created the Autonomies theme.

Biotechnology is a higher risk sector not least because we are dealing with emerging technologies. A high degree of commonality was evident within the sector as it rallied following the breakout from a long-term base in 2011. However the number of companies still trending higher has declined steadily over the last six months and an increasing number are now breaking down. 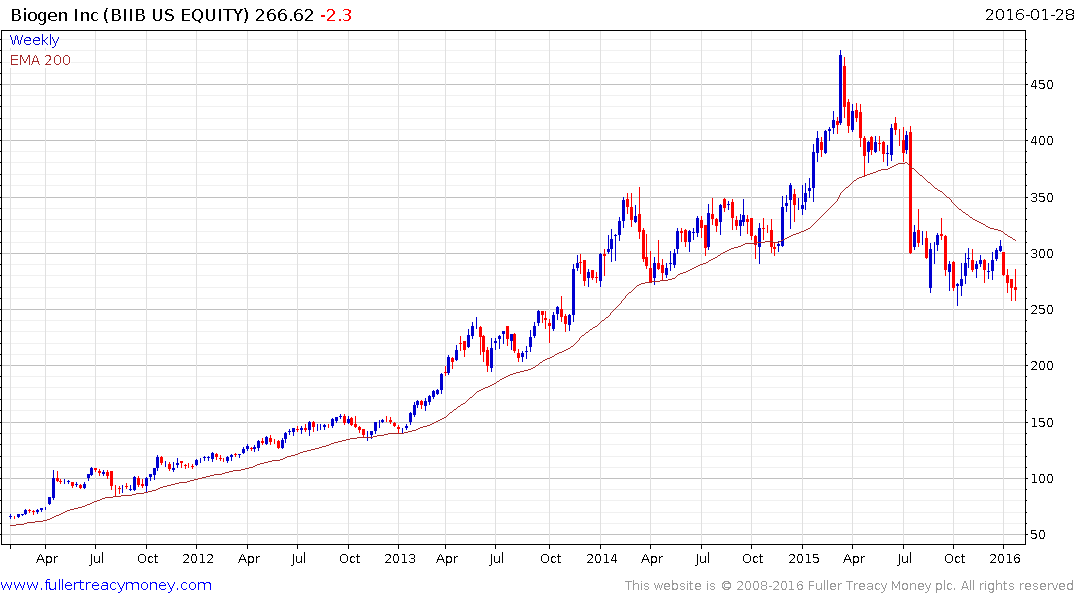 Biogen beat analyst estimates with yesterday’s earnings announcement but has not bounced as impressively as might have been expected. 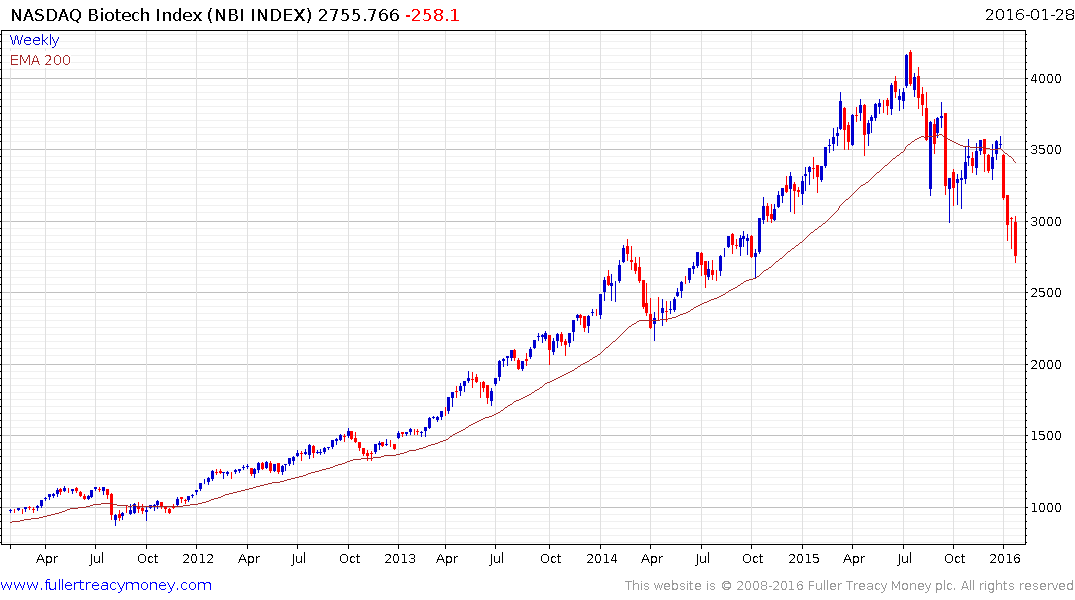 The underperformance of biotech is separating the companies with real value from those that benefitted from hype and leadership. All are being painted with the same brush right now, not least because of the influence of ETFs. However following this correction relative strength and upside leadership will give us a clear indication of which companies will outperform in any recovery.

Interestingly, I clicked through the constituents of the Medical Devices section of the Chart Library today and the majority of companies have not been subject to the same degree of selling pressure as biotech. In fact while it is comparatively easy to locate an ETF catering to biotech there are very few concentrating on medical equipment. That suggests the sector has not been the subject of the same kind of speculative interest and is therefore somewhat insulated from the current unwinding of leveraged positions in ETFs. 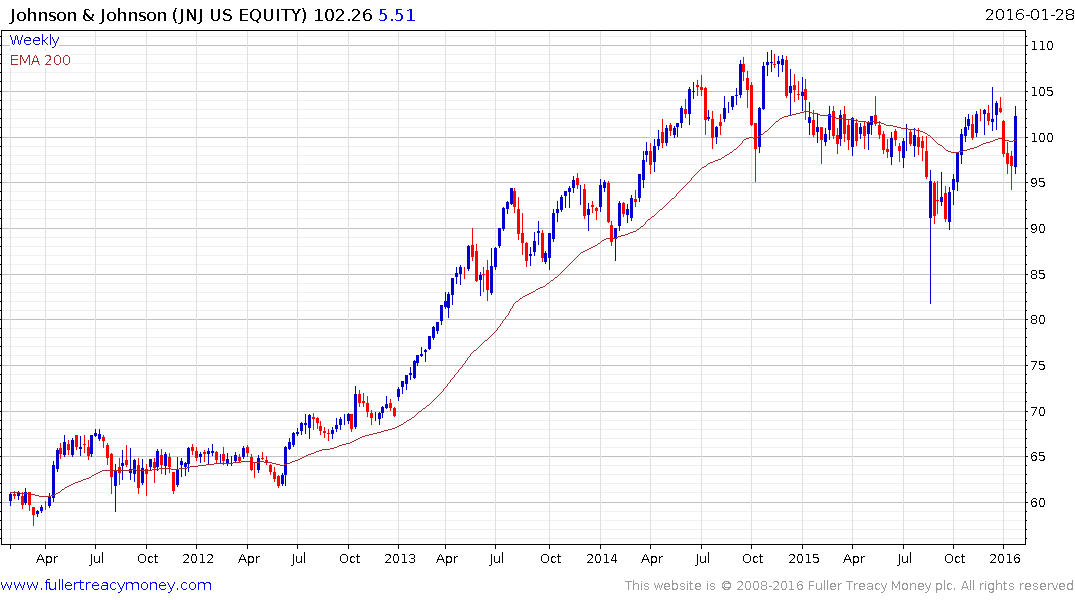 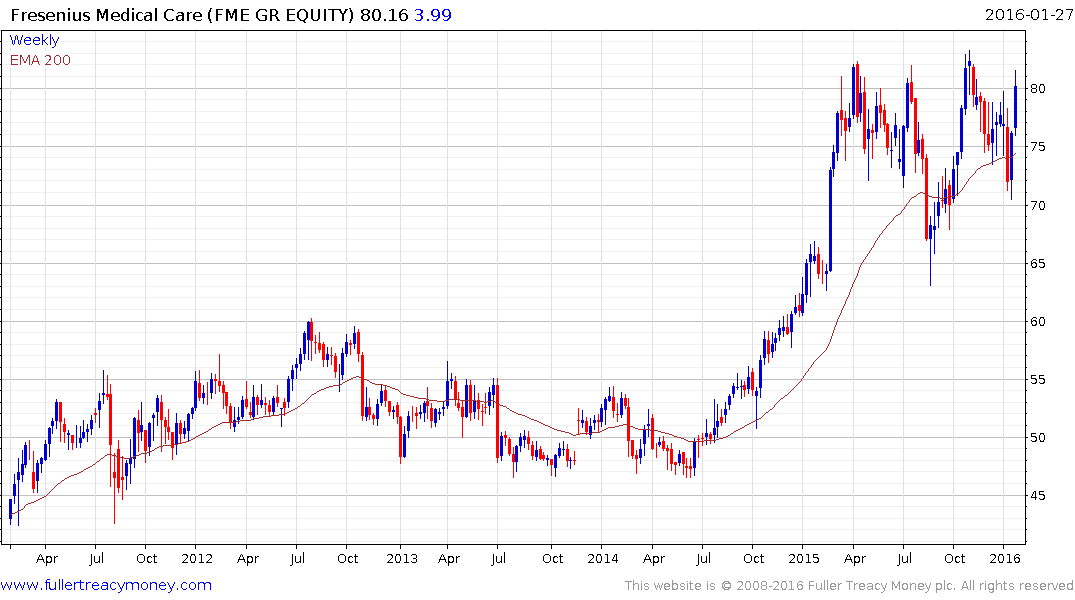 While Fresenius Medical Care is testing the upper side of a yearlong range.