The $1.8 Trillion Global Payout Ride Is Coming Back to Earth
Comment of the Day

The $1.8 Trillion Global Payout Ride Is Coming Back to Earth by Eoin Treacy

In the new era of prudence, shareholders who’ve enjoyed fatter and fatter dividend checks can rest easy no longer.

IHS Markit Ltd. last week projected a “significant slowdown” in global dividend growth this year, at 5.9 percent, totaling $1.8 trillion, according to a bottom-up analysis of over 9,500 firms. Thanks in part to mounting geopolitical risks, that’s a shift from the 14.3 percent boom in 2018 and 9.4 percent the year before.

The business-information provider reckons about 11 percent of firms will announce a dividend cut this year -- an uptick of almost 100 names relative to 2018.

“I believe that dividends of leveraged companies can suffer more,” said Willem Sels, a London-based chief market strategist at HSBC Private Bank. “The excessive focus on the shareholder
value at the expense of bondholder value will be more muted.”

2017 represented the best of all possible worlds for investors. The tax cuts had been passed and investors got busy pricing that into the market. There was money for everything from buybacks to dividend increases and it was being paid for with tax savings, repatriated profits from overseas and fresh debt.

2018 was a lot rockier as the Federal Reserve both raised rates and reduced the size of its balance sheet. That threw focus onto the leverage companies had built up by raising debt levels amid historically low interest rates as the large number of bonds that need to be refinanced in 2019 was priced in. 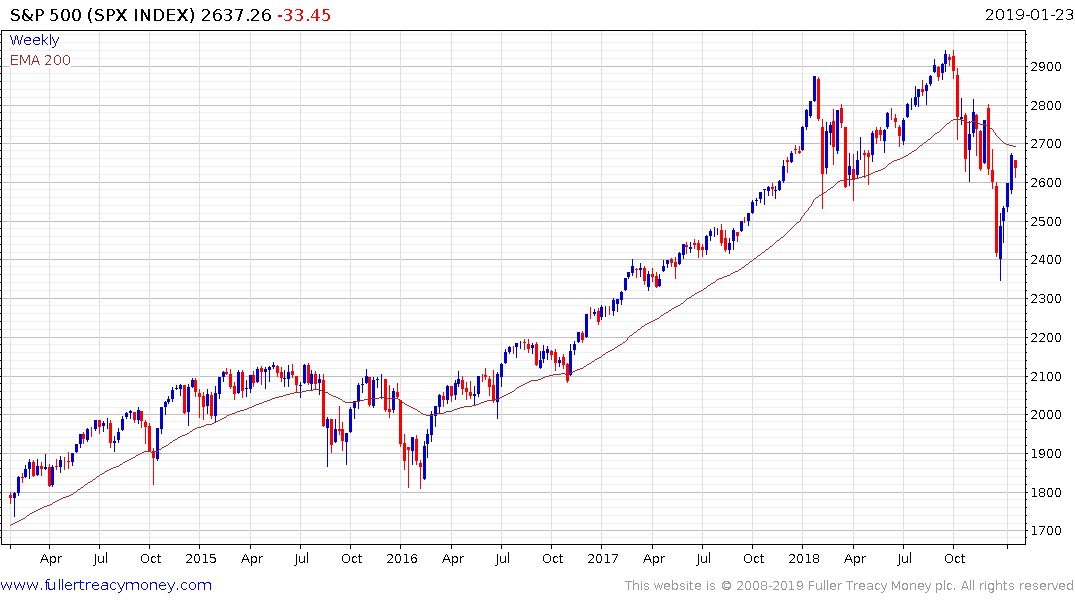 So, what will the market price in during 2019 that we can expect from 2020? The Morgan Stanley Implied Pace of Rate Hikes index was pricing in the potential for a rate cut next year at the beginning of the month and is now back to no change following the heightened volatility in December.

Then we have the Presidential Election in 2020. Personally, I think President Trump wants to declare an amnesty for illegal immigrants in order to try and secure his chance of getting re-elected. However, he can’t do that without being able to say he has secured the border and extradited criminals. Hence, the unrelenting demand for funding the wall.

On the Democrat’s side it is likely their candidate is going to need the support of the left-leaning progressives and the Black caucus to win the nomination. That sets up the next election as a fight between left and right-wing populism.

The third year of the Presidential Cycle is often characterised by volatility but by the second half the Fed is usually easing which helps to reinvigorate animal spirits for a strong performance in the election year. That’s not great news for the first half of this year but is potentially positive for the balance of the year.

The ability of central bank assets to hold their recent rally will likely be the arbiter of whether this loss of consistency on major indices turns into a long medium-term range or a top.