Tech Questions for 2022 by Eoin Treacy

The car industry is shifting to electric, and that changes a lot of what a car is - there’s an order of magnitude fewer moving parts, a very different supplier base, and much of the sophistication moves to software. We go from complex cars with simple software to simple cars with complex software.

Seen from tech, this looks a lot like the smartphone take-over of mobile phones, and there’s a lot of pattern recognition, right down to the dumb old industrial companies that think software is easy and they can just hire some developers. But it’s not yet entirely clear whether this really is disruption. An electric car is a better car but an iPhone is not a better Blackberry - it’s an entirely different thing that happens to be roughly the same size. So how much does electric really rewrite car manufacturing? Bulls think Tesla is a software company (and lots of other things), but bears think that no, it’s still a car company.

Autonomy is potentially much more profound and disruptive, and really does change what a car is - a car with no steering wheel is not really a car anymore. That raises as many questions as cars themselves did (it was much easier to predict mass car-ownership than to predict Walmart), and the tech itself remains full of questions. Can Tesla boot-strap its way through to something that works well enough? Will Waymo get there first going top-down? Are there winner-takes-all effects?

But more importantly, we don’t know when, how or where any of this will work. There was a period of euphoria a few years ago when AVs looked imminent, but it may now be that autonomy is like the old joke that AI is anything that doesn’t work yet. ‘Full’ autonomy may be as many decades away as ‘general AI’ (indeed it might require general AI!) but we’ll get all sorts of much more limited automation in the meantime.

The reason Tesla has achieved a $1 trillion valuation is because it is a favoured trading vehicle (pardon the pun) for options traders. That has created synthetic demand for the shares and supported the valuation. Nevertheless, promise of “full self-driving” keeps being pushed back. The company’s autonomy day was nearly 3 years ago.

This article from VOX highlights how some of the issues the company is facing with its software are proving more difficult to dispel than many investors realise. Here is a section:

These are just the two most recent Tesla safety-related software updates. The automaker has initiated nine recalls within the past three months, and federal safety regulators opening investigations into the company now feel like this is a regular occurrence. At the same time, some of the problems that the software updates are meant to address seem to be ongoing or, in some cases, worsening.

For example, Tesla issued a recall — and a software update — following reports last fall that vehicles using Autopilot would brake without warning after their computers detected hazards that didn’t actually exist. But this “phantom braking” issue actually appeared to get worse in the months following the recall, possibly because Tesla decided to stop using radar-based sensors, in favor of cameras, on some vehicle models, according to a recent report from the Washington Post. Federal regulators are again consulting the company about how to address the problem. 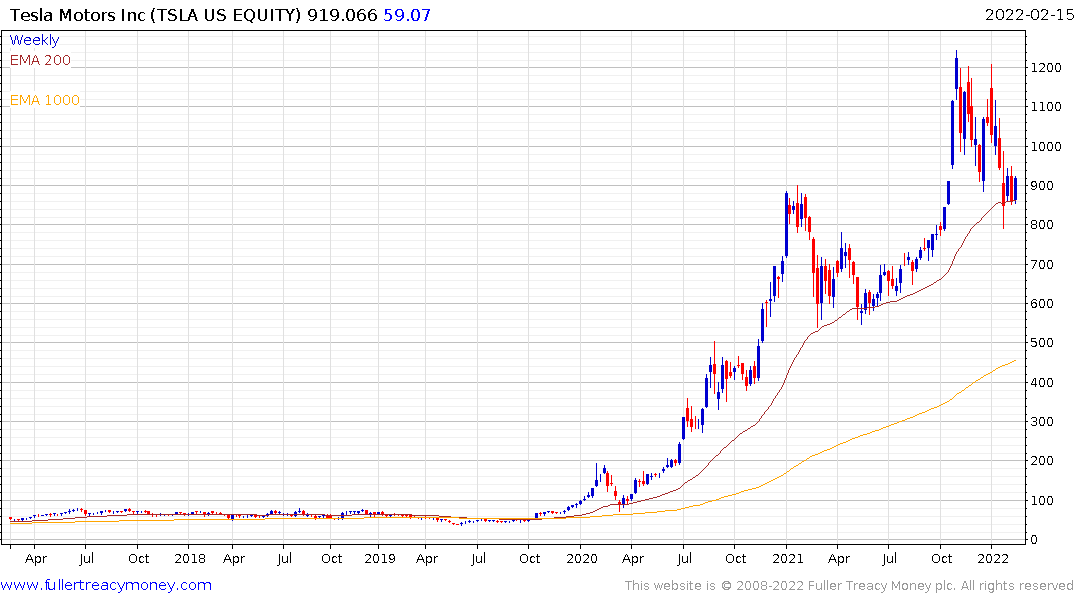 Bearish traders of Tesla realised a long time ago that the performance of the share has little to do with fundamentals or reality. That will not always be the case but it remains true today. The share continues to steady from the region of the trend mean.