Sunak Offers U.K. Companies Way to Cut Tax Bill in Next 2 Years
Comment of the Day

Chancellor of the Exchequer Rishi Sunak says the U.K. will introduce a new “super deduction” to reduce tax bills for investments in the next two years.

Sunak gives example: “Under the existing rules, a construction firm buying £10m of new equipment could reduce their taxable income, in the year they invest, by £2.6m. With the Super Deduction, they can now reduce it by £13 million”

This measure is designed to motivate companies to invest in new plant and machinery. It will create a significant boost to consumption over the next year by pulling forward any such investment from the future. It’s one of a range of measures in today’s budget aimed at promoting economic growth even as the government look at what will be required to deal with the massive rise in debt resulting from the pandemic.

Ultralow borrowing costs meant the UK and other countries saw the cost of servicing their debt decrease in 2020 even as the total leapt higher. That’s unsustainable without yield curve control. Yields have doubled in the last four months. That has a material impact on the cost of refinancing and issuing new debt. Governments have ongoing funding commitments so this is a relevant consideration.

The only way the rise in yields is going to be curtailed is with direct central bank support. With the Bank of England’s new mandate to achieve net zero emissions, we are looking at more spending, more debt and enforced negative real interest rates. The only real question is at what point the Bank of England will intervene to support Gilt prices and drive yields lower. 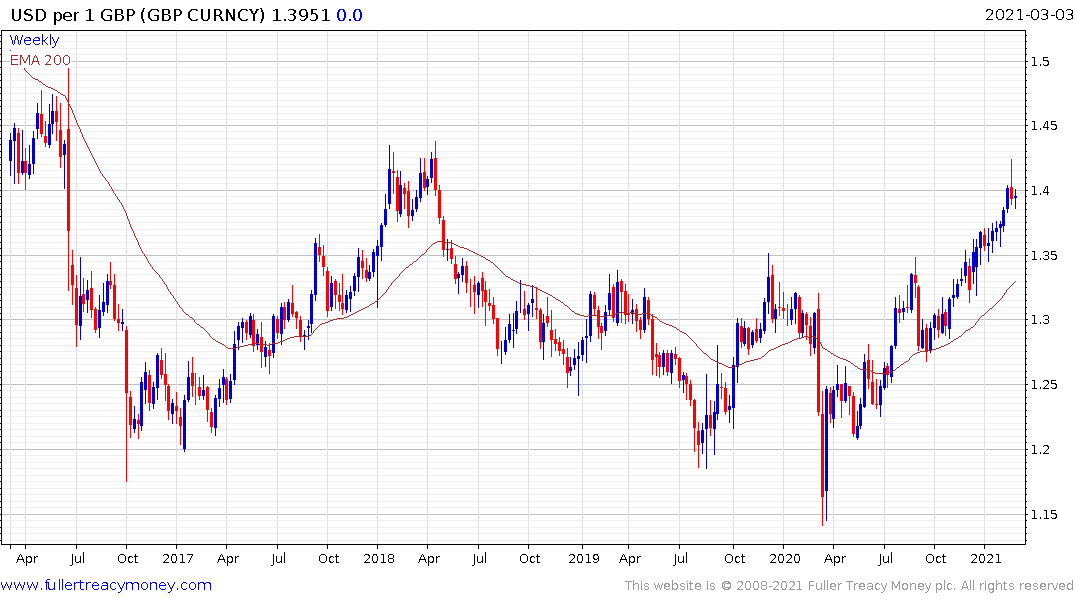 The Pound has paused at the upper side of its range against the US Dollar and some further consolidation of recent gains appears likely. 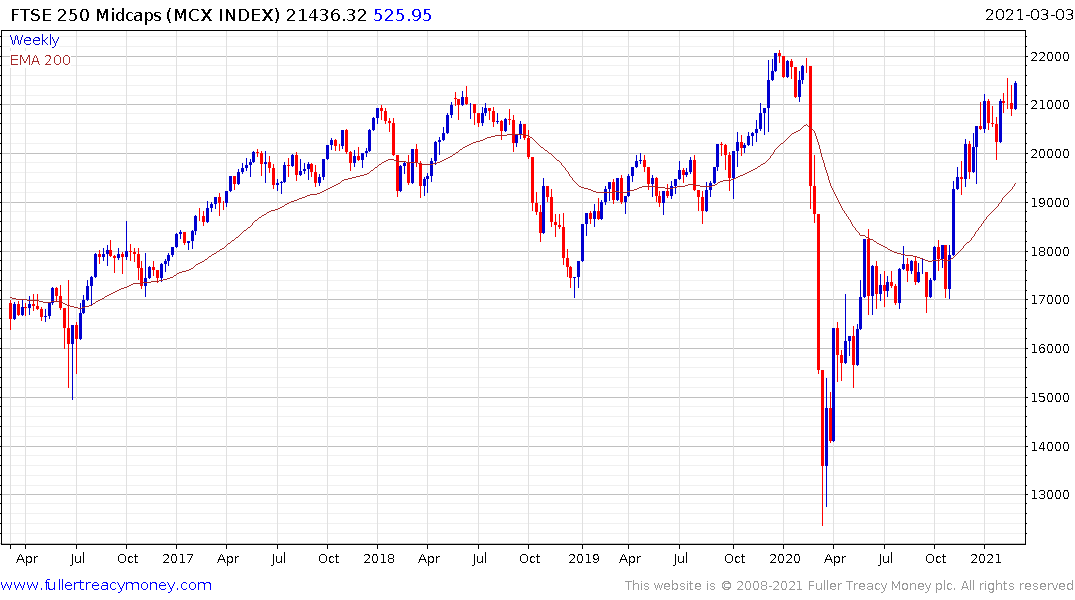 The FTSE-250, with its focus on domestic businesses, is likely to continue to outperform since they will benefit from the government’s reflation policies.

The loosening of restrictions on dual class shares and the introduction of rules to promote the UK SPAC market should benefit activity in the stock market. 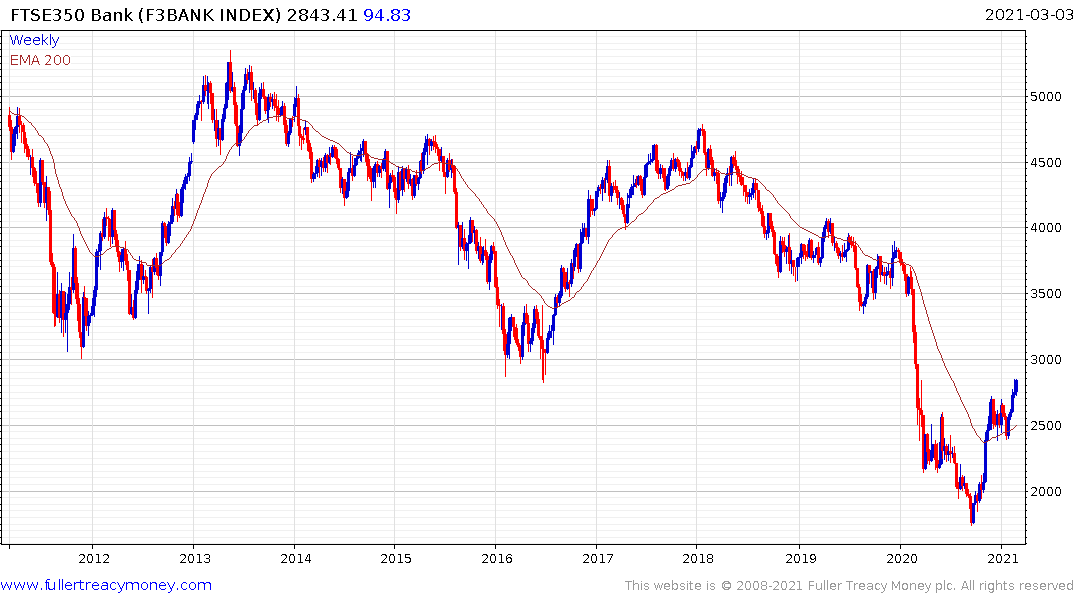 The FTSE-350 Banks Index continues to extend the breakout from its short-term range and remains on a recovery trajectory. 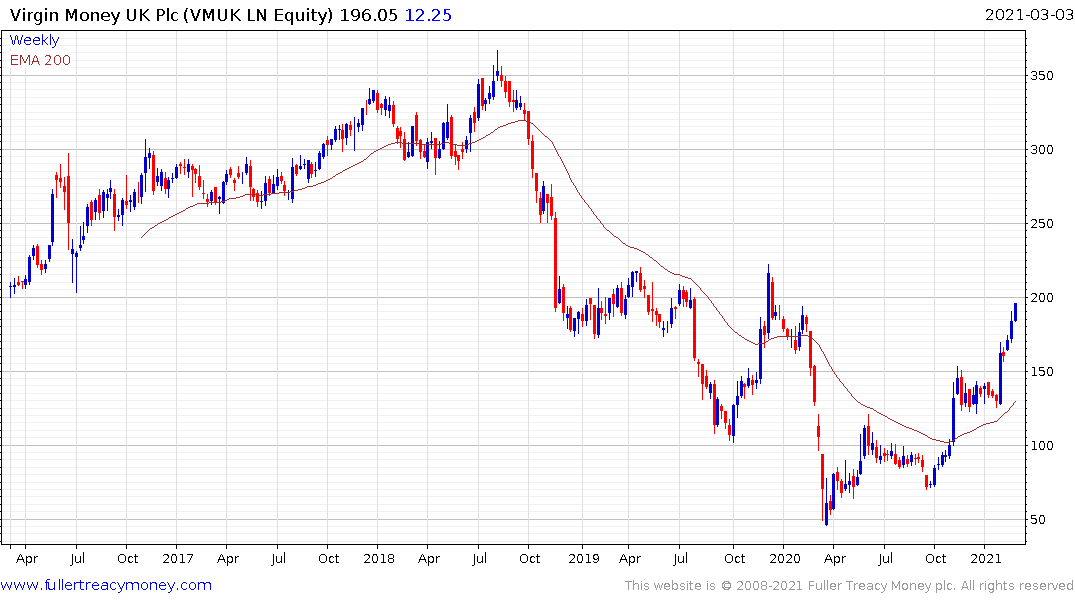 Virgin Money appears to be in the process of breaking a medium-term downtrend. 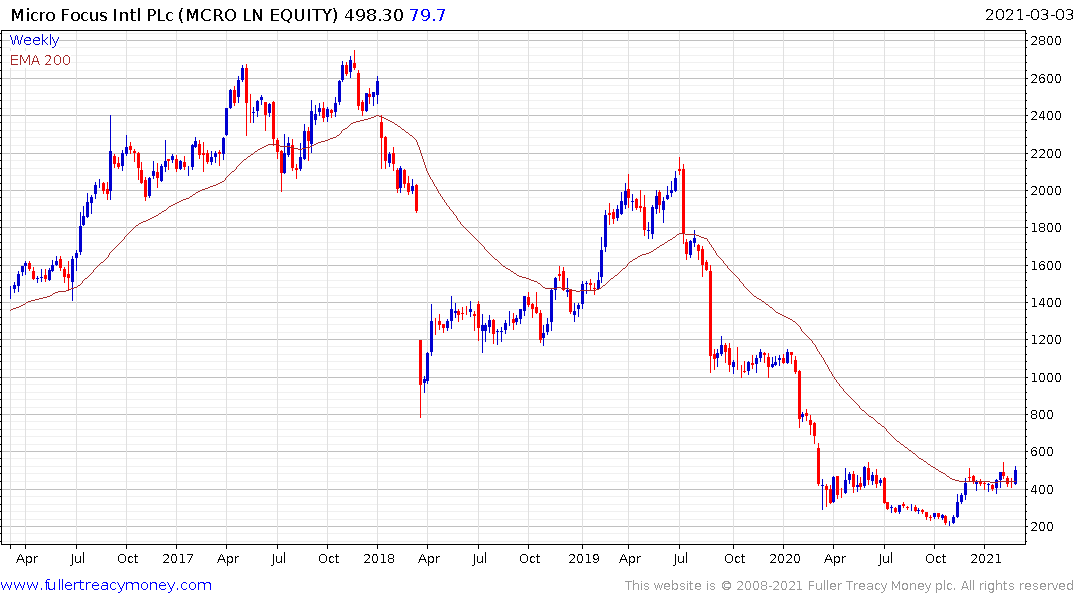 Micro Focus International is testing the upper side of its base formation.