Stronger for Longer by Eoin Treacy

Japan is making a gradual exit from deflation. We raise our real GDP forecast for 2018 on exports and capex, while we expect a moderate recovery in private consumption and inflation in the near term.

Growth: For 2018, we revise up our real GDP forecast to 1.3%Y from 1.1%Y, mainly on stronger exports and private capex, while we revise down our nominal growth forecast to 1.6%Y from 2.2%Y, reflecting higher oil prices with slow adjustments in domestic prices in the near term. That said, we expect both real and nominal GDP growth to reaccelerate to 1.5%Y and 2.6%Y, respectively in 2019. Japan’s exports should continue to benefit from the ongoing synchronous global recovery. Domestic capex should remain solid thanks to higher capacity utilisation rates, a better business outlook, labour shortages and inbound consumption ahead of the 2020 Tokyo Olympics. Meanwhile, we expect private consumption to grow only moderately in the near term before starting to accelerate from 2H18 via solid income growth and front-loaded spending ahead of the consumption tax hike.

Prices: We think that Japan’s underlying inflation has already bottomed. That said, we lower our core-core CPI (ex. energy and fresh food) outlook, especially for 1H18, mainly from recent sluggish consumption and slower-than-expected wage growth for regular workers. We still expect the core-core to reach 1.0%Y in Oct-Dec 2018, which will likely remain above the market consensus. For 2019, our FX team expects sharp yen appreciation, which will likely delay CPI approaching the 2%Y target.

Japan has been fighting deflation for so long very few believe it will ever overcome the challenges it faces. However, Japan is now one of the only countries running both easy monetary and fiscal stimulus. The only thing we can definitely credit quantitative easing with in the USA is asset price inflation and that should be equally true of Japan. 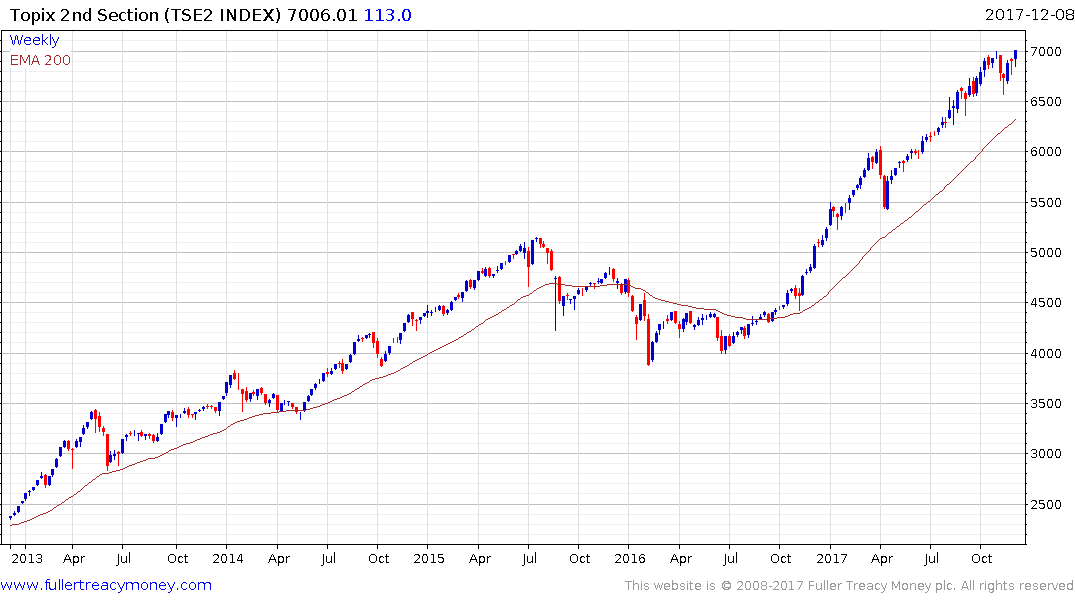 The 2nd Section Index closed above 7000 today, and upside follow through next week would signal a return to demand dominance following its pause over the last six weeks. As a lead indicator for the wider market that would appear to bode well for the Nikkei-225. 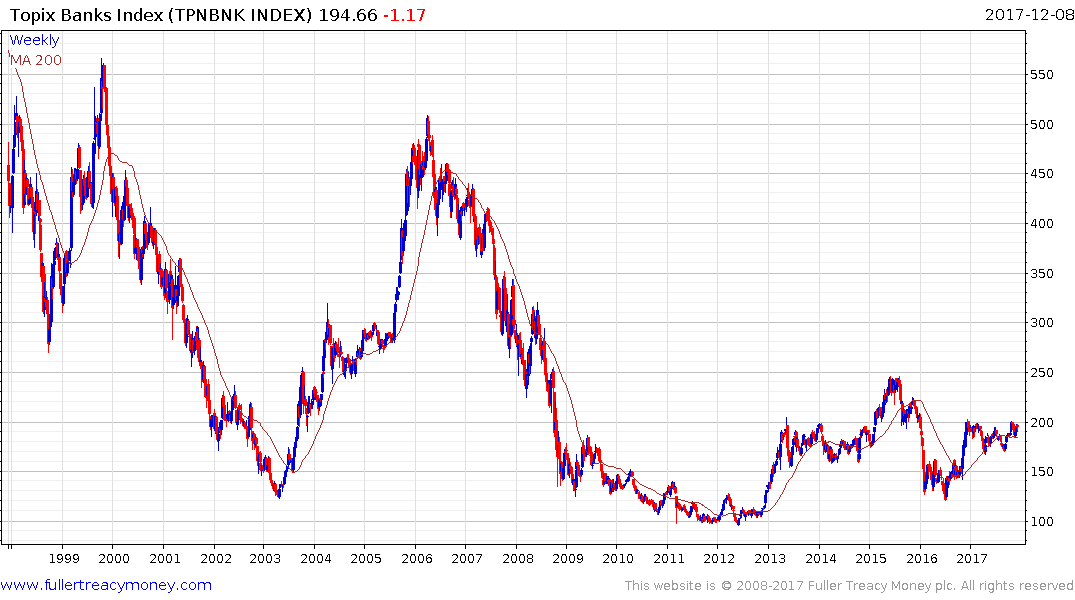 In a number of videos this week I have pointed out the fact that the banking sector has been largely rangebound for the last few years but is close to key area of resistance and a sustained move above 200 would likely signal a return to demand dominance. The banks have laboured under the low interest rate regime and the reappearance of inflation would likely represent a catalyst for rerating.

I clicked through the entire constituents of the Japanese financial sector two nights ago, reducing the 361 shares to 34 with interesting chart patterns. More than half are property developers or REITs. 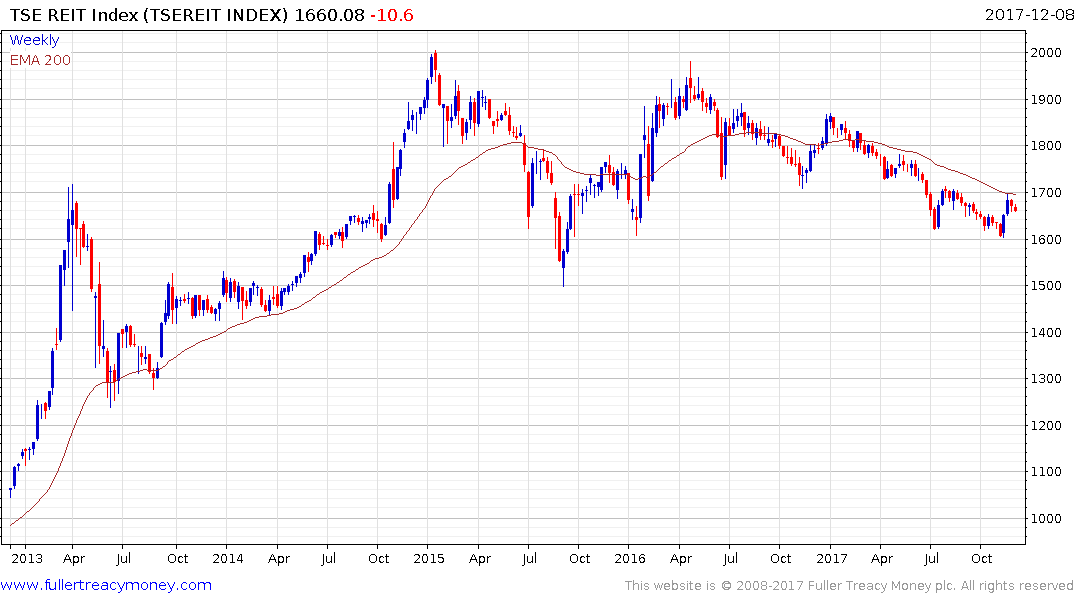 The TSE REIT Index has bounced from the 1600 area over the last few weeks and is now testing the region of the trend mean. A sustained move above it would break the two-year downtrend.

The two large caps that really stand out are Japan Post Bank and Japan Post Insurance; both of which are relatively recent listings. 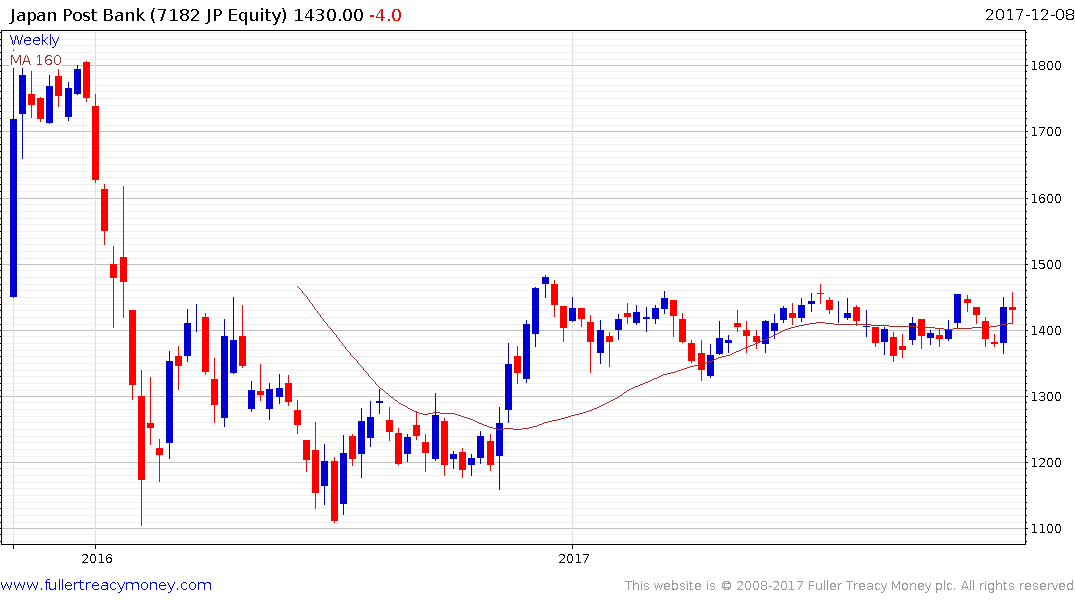 Japan Post Bank has been ranging below 1500 since late last year and a sustained move out of this range would signal a return to demand dominance. 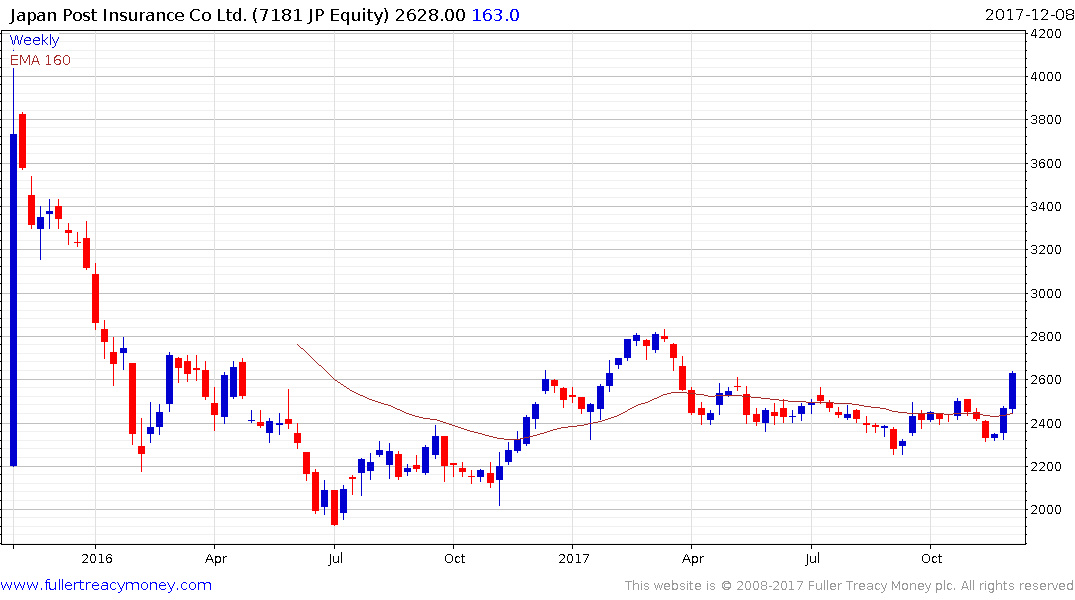 Japan Post Insurance has been ranging below 2500 for most of this year but broke upward this week. A sustained move below that level would be required to question medium-term scope for additional upside.