The hiring numbers pushed the 10-year Treasury yield lower for a fifth straight day as it pushed below 1.6%. The yen rose versus the dollar and gold spiked above $1,500. The equity rout spread to Europe, where the Stoxx 600 saw its biggest slide in 10 months and the FTSE 100 dropped the most since 2016. Oil fell below $53 a barrel after a report showed U.S. crude inventories increased.

The disappointing data out of the U.S. and Europe, as well as weak earnings reports from automakers this week, is forcing investors to reconsider their strategies. The most recent economic numbers are driving concerns that a slowdown, which had been mostly confined to manufacturing, may be spreading to the consumer amid the U.S.-China trade war. Those fears also increased bets that the Federal Reserve will cut rates this month. Focus now turns to services PMI data on Thursday and the nonfarm payrolls data on Friday.

The fear many people have is the debt issue which macro investors have been talking about over the last 18 months is eventually going to result in a problem where investors revolt at paltry yields relative to the risk.

The failure of bond auctions in Germany, Japan and US over the last couple of months, while glossed over the in press, suggest there is liquidity risk in the bond market. The spiking of repo rates and the requirement for the Fed to introduce, what is effectively, a standing repo facility also highlights illiquidity.

Since central bank liquidity has been one of the primary supports for the stock market over the last decade, these are meaningful developments. Meanwhile, the strength of the Dollar has resulted in the total assets of central banks chart coming back to test its May lows. 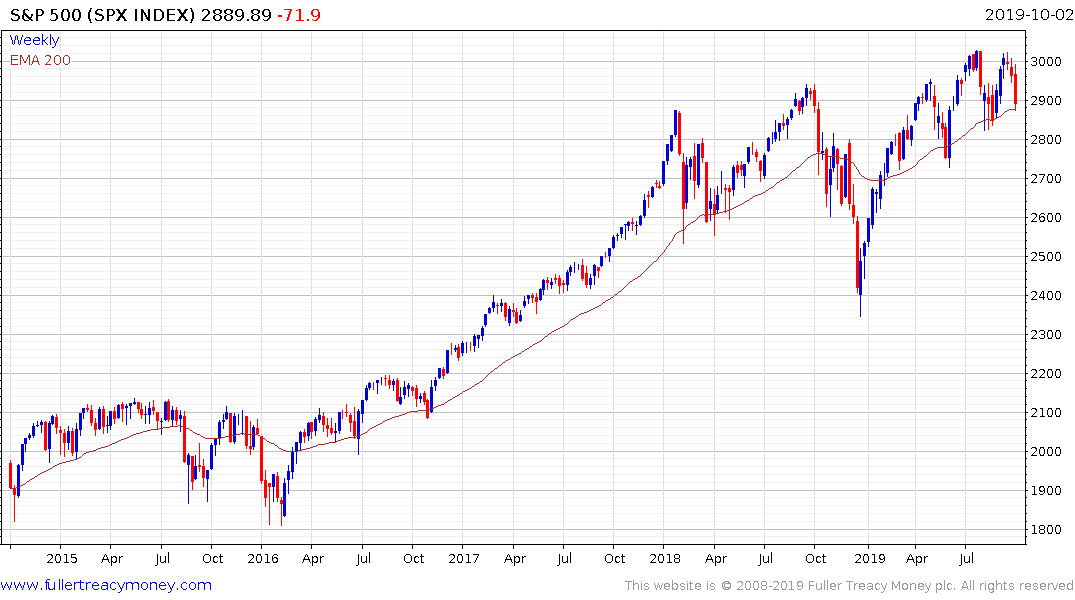 The S&P500 pulled back today to test the region of the trend mean and this year’s succession of higher reaction lows. This represents the first area of potential support and will need to hold if a potentially deeper and lengthier pause is to be avoided. 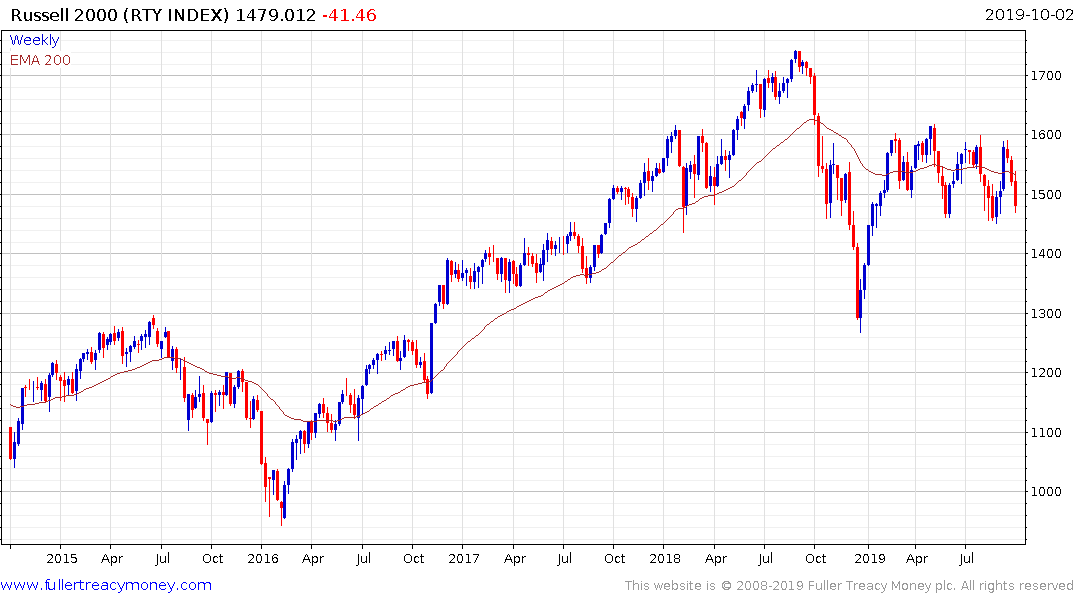 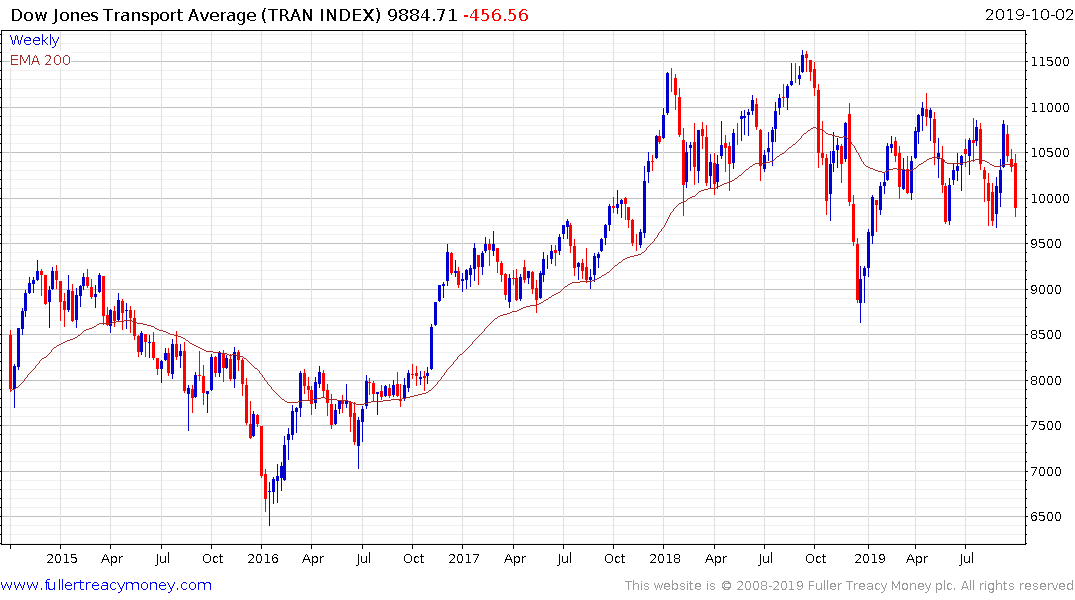 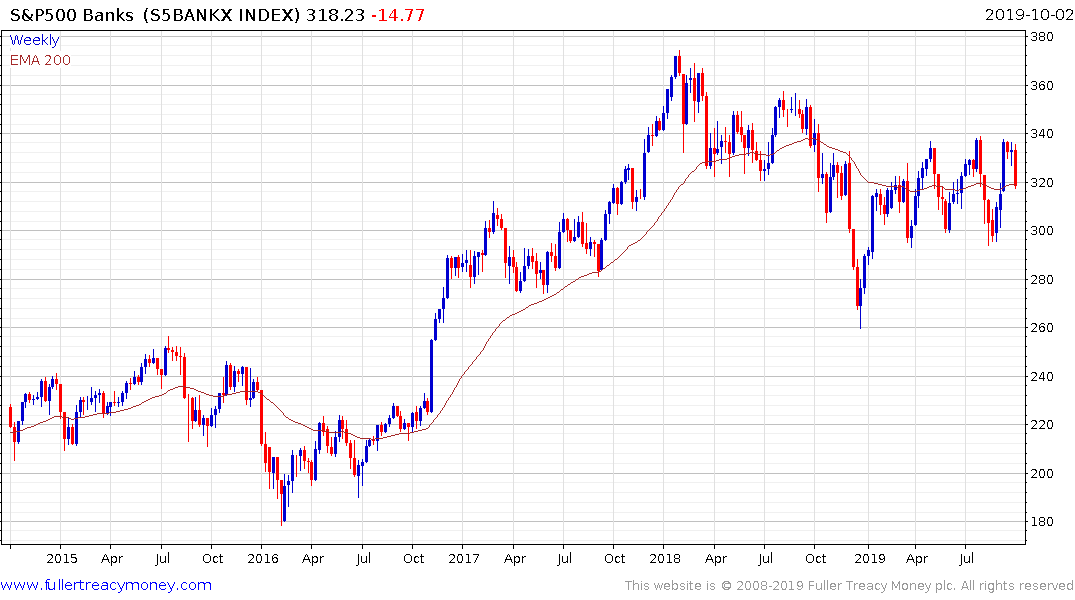 The Russell 2000 failed to breakout three weeks ago and is now back testing the lower side of its range. It has a similar pattern with the transportation and banking sectors and all are more leveraged to domestic US growth than the international market. The banking sector has held up better but the common thread is the lower sides of the ranges need to hold if upside is to be given the benefit of the doubt.