Stock Wobble No Help to Gold as Market Bets on U.S. Rate Hike
Comment of the Day

Stock Wobble No Help to Gold as Market Bets on U.S. Rate Hike by Eoin Treacy

Metal for immediate delivery fell to the lowest in four months at $1,252.44 an ounce in London, having dropped every day this week as traders factor in an increase in interest rates this month as a near certainty. Prices declined despite growing volatility in equity markets, with the S&P 500 Index losing ground in four of the last five sessions.

“The rate hike is now looming and people are suddenly realizing that gold may not be the most attractive long position at the moment,” said David Govett, head of precious metals trading at Marex Spectron in London.

Bullion is heading for the the first back-to-back annual advance since 2012, but traders recently have dented those gains. Higher rates and a change in leadership at the Fed have outweighed deepening geopolitical risks, including the threat of war on the Korean peninsula and a third intifada in Israel.

“People’s memories are short and their pockets not so deep,” Govett said.

Gold does best when inflation is rising faster than central banks are willing to raise interest rates. That is when its credentials as a store of value really shine. Alternatively, it also does well in a supply inelasticity meets rising demand environment such as we saw in the last major bull advance that peaked in 2011. Right now, we are somewhere in between with expectations for future inflation outpacing the reality represented by official statistics so gold remains largely rangebound, albeit with a downward bias as of today.

At The Chart Seminar we define a range as an explosion waiting to happen because the congestion area represents a decision making process for investors. That results in vacuums of supply above and demand below the range forming, so that once punctured we see powerful breakouts relative to the inert nature of the trading range. 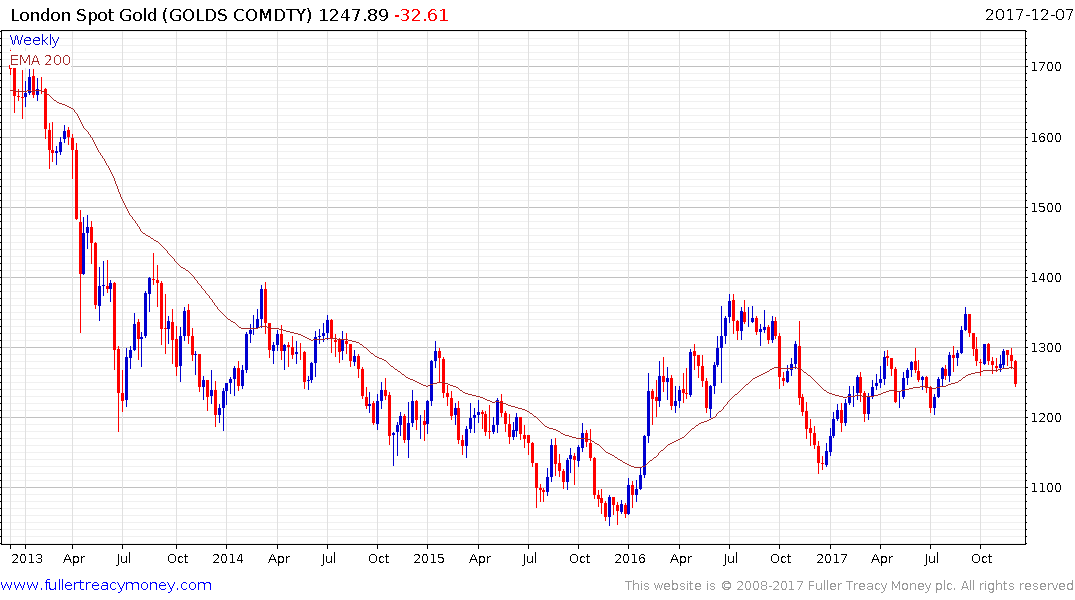 Gold had been trading in a very inert manner relative to its rather volatile activity of the last year and broke downwards today to negate potential support in the region of the trend mean and the psychological $1250 area. A clear upward dynamic will now be required to check potential for a further test of underlying trading. 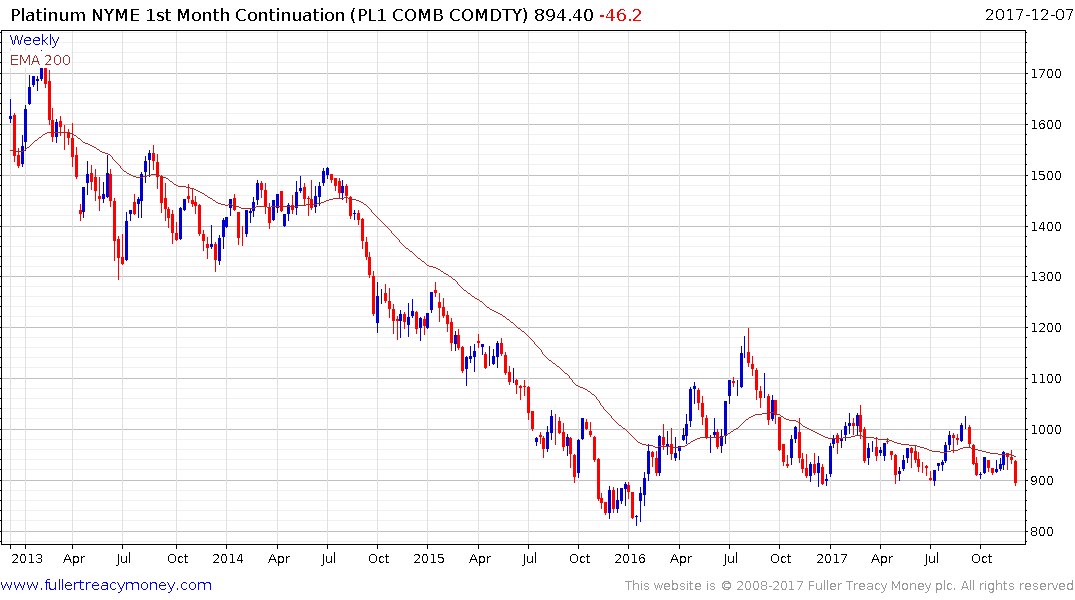 Platinum has pulled back on consecutive days and a short-term oversold condition is evident as it tests the region of the July and December 2016 lows below $900. Again, a clear upward dynamic will be required to confirm support in this area. 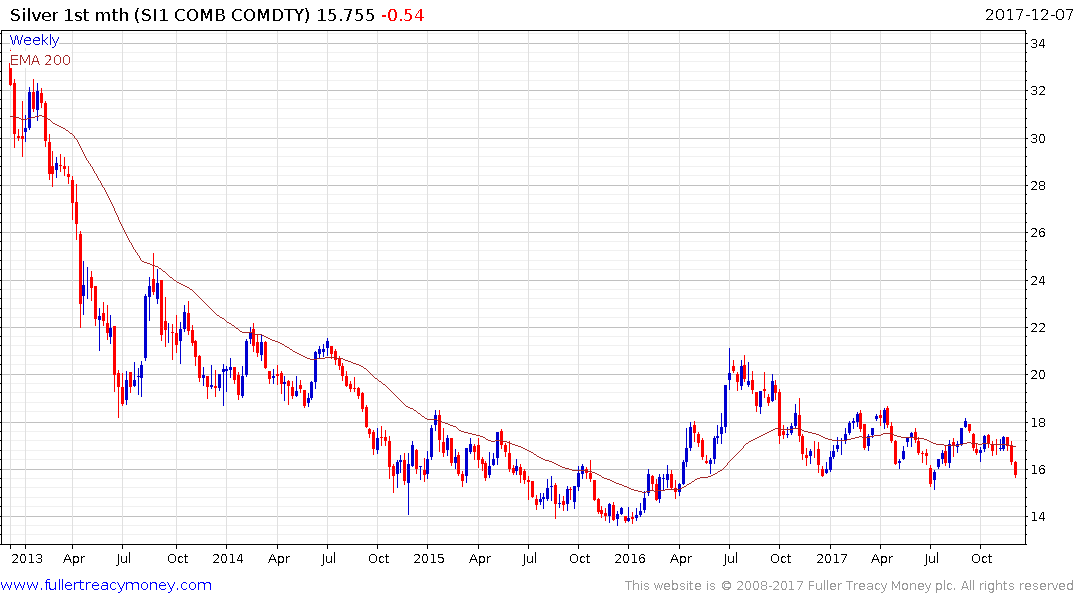 Silver is also developing a short-term oversold condition as it falls back towards the $15. 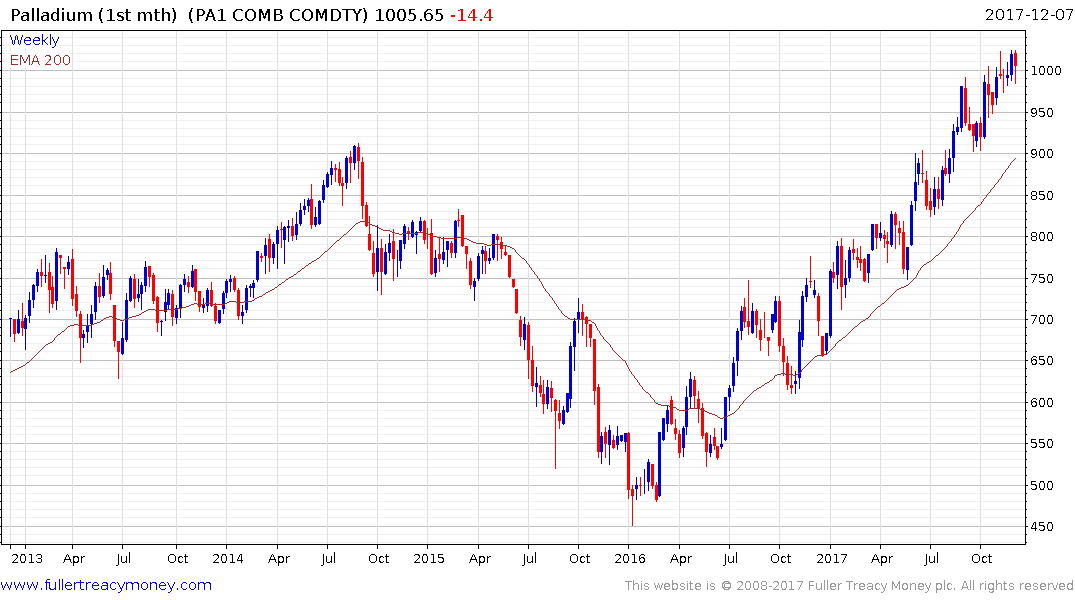 Meanwhile palladium bucked the trend and pushed back above the psychological $1000 again today.