When emerging-market stocks trade this cheap relative to U.S. equities, a rebound is normally in order.

The MSCI Emerging Markets Index has traded at a discount to the Standard and Poor’s 500 Index since 2006, but for the past five years its relative valuation has held within a range, with its price-earnings ratio fluctuating between 25 percent below the U.S. gauge at the best of times and 33 percent during the worst.

The index, the benchmark gauge of developing-nation equities, typically bounces back in a matter of weeks once it reaches the floor. That was certainly the case on three previous occasions: at the height of the Russian currency crisis in 2014; in the wake of the Federal Reserve’s December 2015 decision to raise interest rates for the first time in almost a decade; and at the end of the technology sell-off last year.

The index closed at a valuation ratio of 66.37 percent on Friday, or a discount of 33.63 percent to U.S. stocks based on price-to-estimated earnings. On Monday, it rallied 1 percent, the best one-day gain in six weeks.

Still, past rebounds are no guarantee of future performance and the environment remains fragile for emerging markets.

Investors can’t know how ugly the U.S. trade war might get, how deeply Fed interest-rate increases will affect developing-nation currencies or where the next political shock will come from.

But for those convinced of the investment case for emerging markets and willing to wait for the right valuation to resume buying, this could be the moment. Stocks are as cheap now as at any time in the past five years.

However, there is another statistic that also points to the relative disparity in valuation between the two segments of the global economy. Right now, US junk bonds are trading at narrower spreads than emerging sovereigns.

This gives us an additional perspective on the relative risk perception right now. China, Turkey, Venezuela, Argentina and Italy are each worrying investors on an individual basis. Meanwhile Wall Street’s relative calm and the continued stability of its debt markets are imbuing investors with a sense of stability. 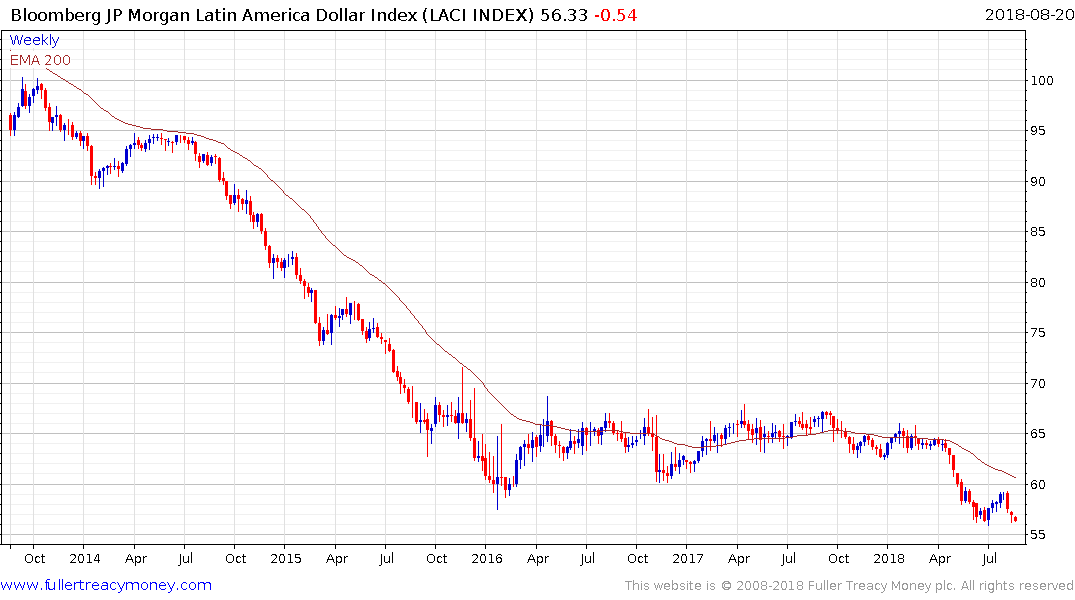 The lynchpin to this question is the strength of the US Dollar. The Latin America Dollar Index encountered resistance in the region of the lower side of the overhead trading range in July and remains under pressure. 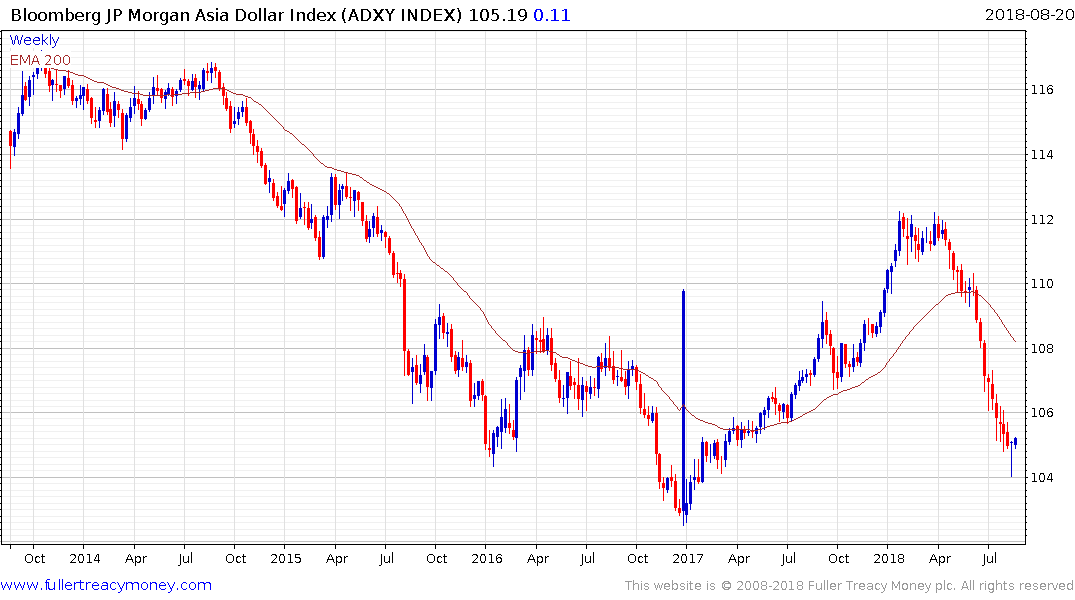 Meanwhile the Asia Dollar Index is very oversold following the Renminbi’s decline and potential for a reversionary rally is improving. That suggests that among Asian markets are more likely to be the subject of bargain hunters. 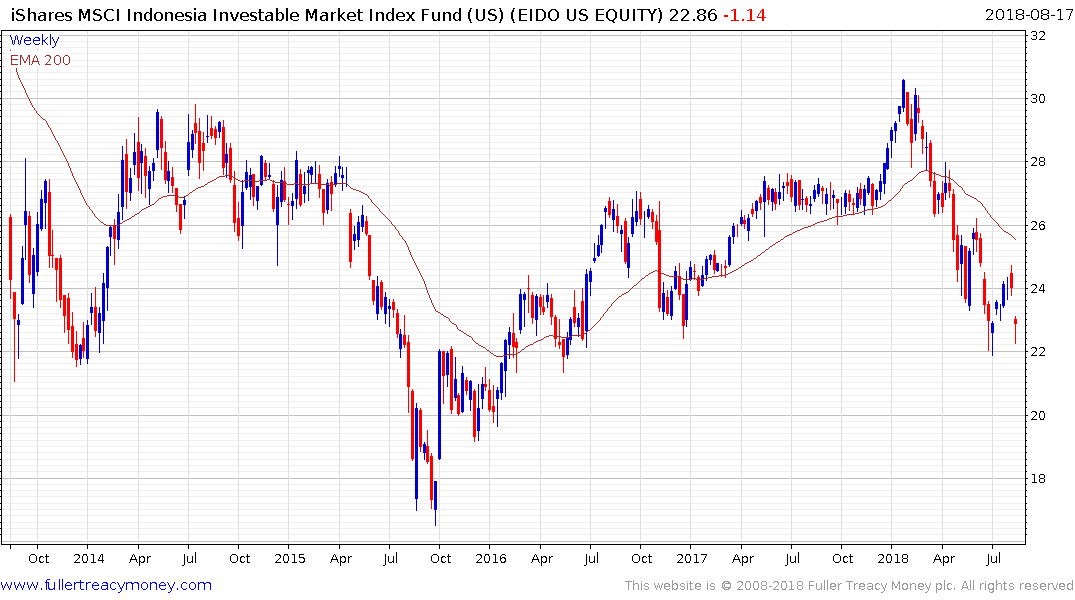 The iShares MSCI Indonesia ETF may be in the process of posting a higher reaction low. 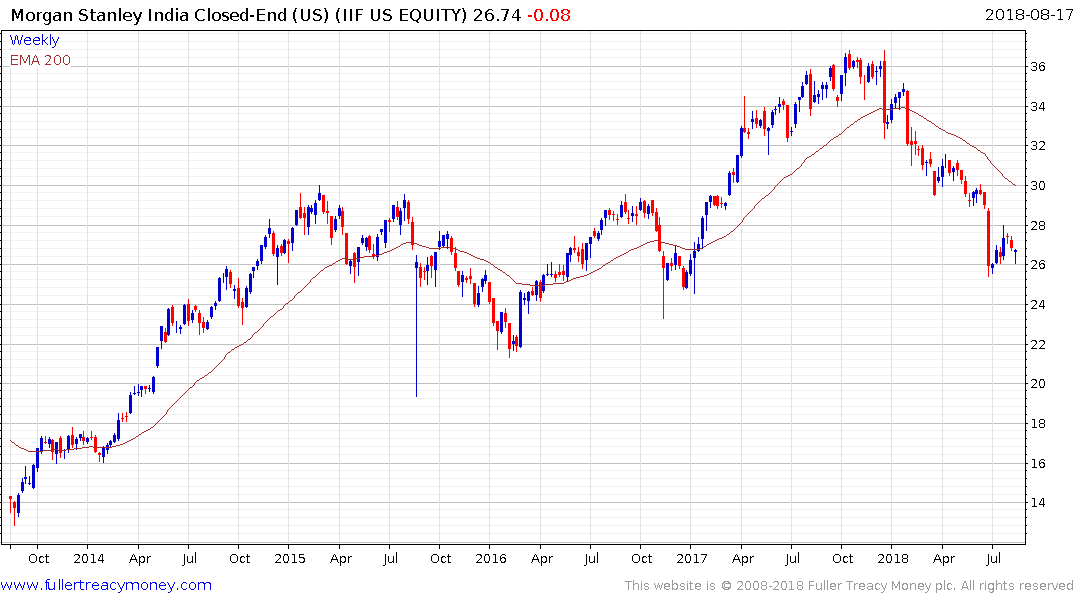 The Morgan Stanley India Investment Fund trades at a discount to NAV of 11.46% and may also be in the process of posting a higher reaction low.