Rude Health
“There’s been a few shots on the trade side, but nothing has fully broken out,” said Dermot Ryan, a fund co-manager at AMP Capital in Sydney. “Ultimately, the stock market looks at the valuation and health of the sectors. The resources sector is in rude health at the moment.”

Not as Sensitive
“Australia sometimes acts as an EM by proxy, but with one key difference: it’s not as sensitive to the potential negative impact from increasing tariffs on Chinese and U.S. goods,” said Kerry Craig, global market strategist at JPMorgan Asset Management in Melbourne. “We’re not as crucial in the supply chain as many north Asian economies. While there would be some impact on the materials sector if Chinese growth was expected to take a hit and metals demand fell, it’s more than likely that China would respond by increased infrastructure spend to keep the ship steady.”

Pretty Cheap
“The banks look pretty cheap,” for a longer-term investor, said Don Hamson, managing director at Plato Investment Management in Sydney. “It’s been a bad 18 months, but maybe we’re coming toward the end of it.”

The Australian financial sector has been under a cloud because of the Royal Commission's focus on overcharging in the small to medium sized enterprises sector. However, the hearings are about to refocus on relations between financial firms and people living in remote areas such as Aboriginal peoples. While that is likely to represent some political risk, it is less likely to have a large impact on the stock market. 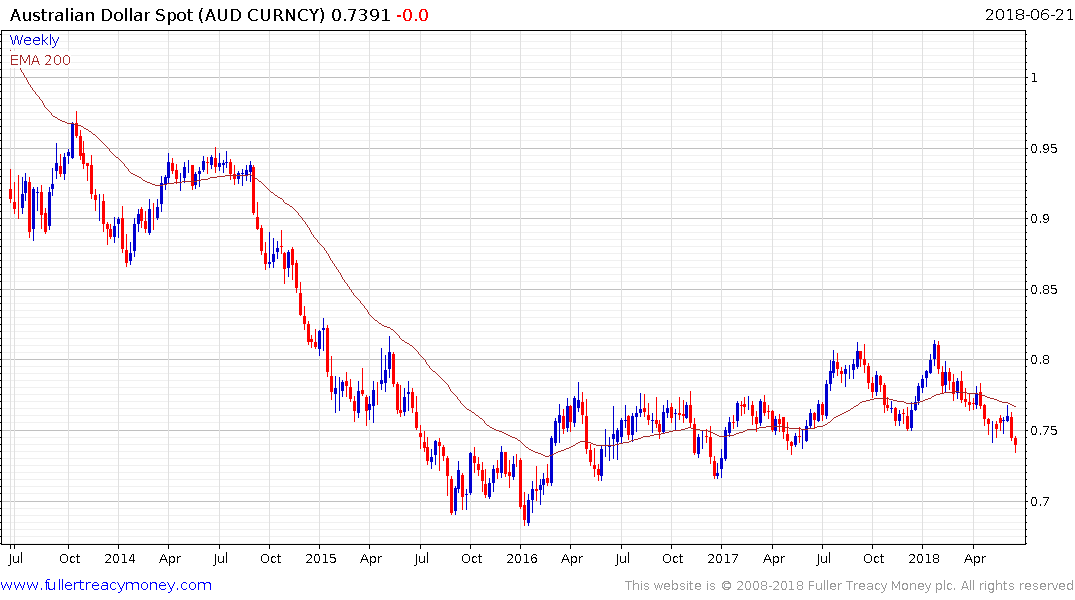 Meanwhile the Australian Dollar has pulled back sharply over the last couple of weeks to break its progression of higher reaction lows against the US Dollar. A short-term oversold condition is now evident so some steadying is increasingly likely but a sustained move above the trend mean would be required to question medium-term supply dominance. 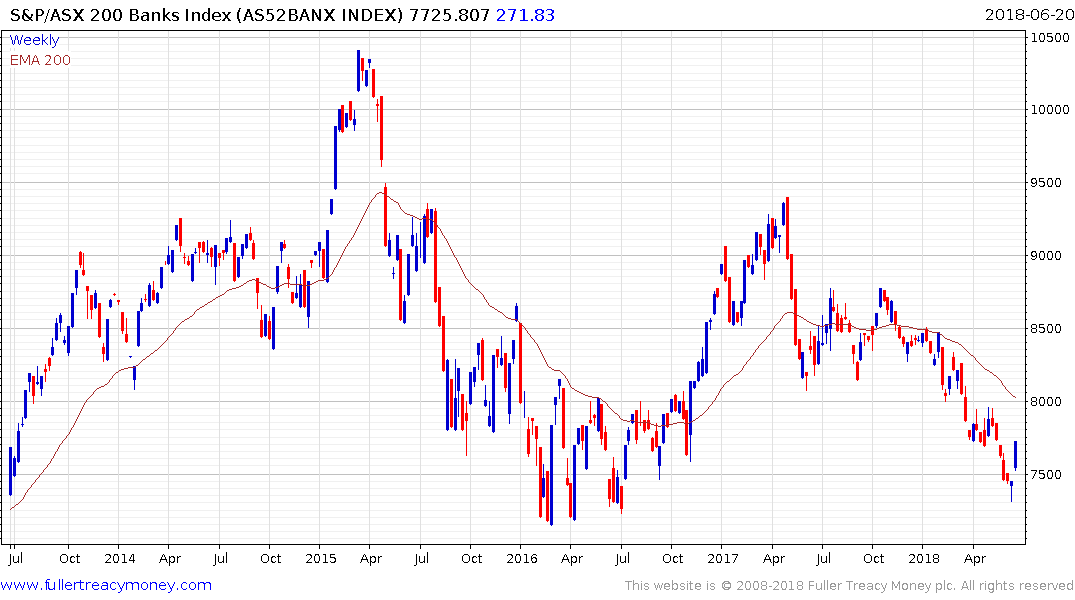 The S&P/ASX 300 Banks Index has bounced emphatically this week from the region of the 2016 lows and has already unwound much of its oversold condition relative to the trend mean. A sustained move above 8000 would be required to confirm a return to demand dominance beyond the short term. 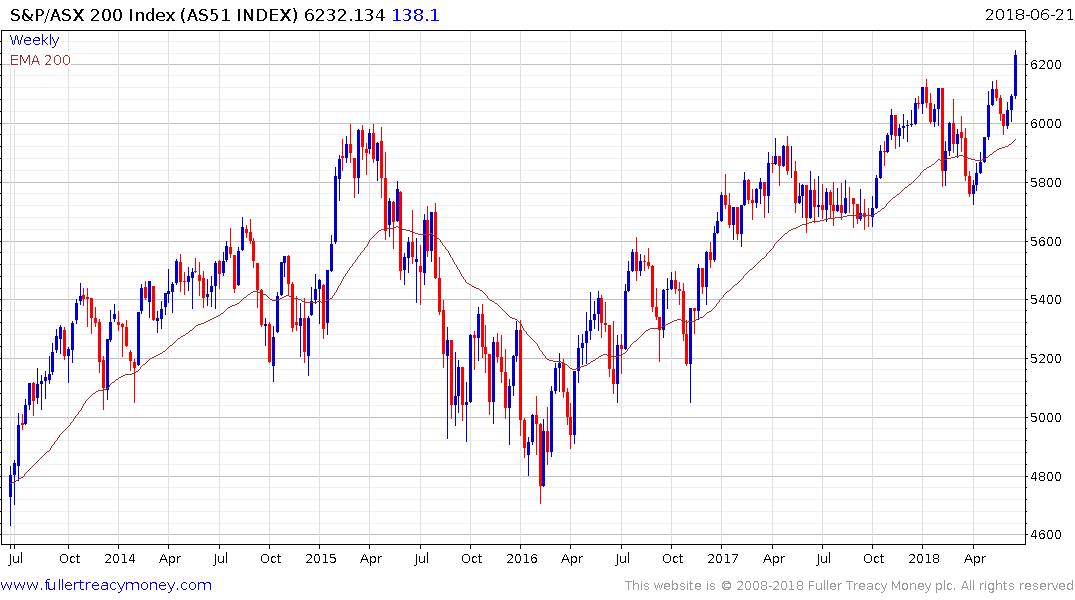 The S&P/ASX 200 Index has now cleared the psychological 6000 level and while somewhat overbought in the short-term, a sustained move below the trend mean would be required to question medium-term scope for continued upside. 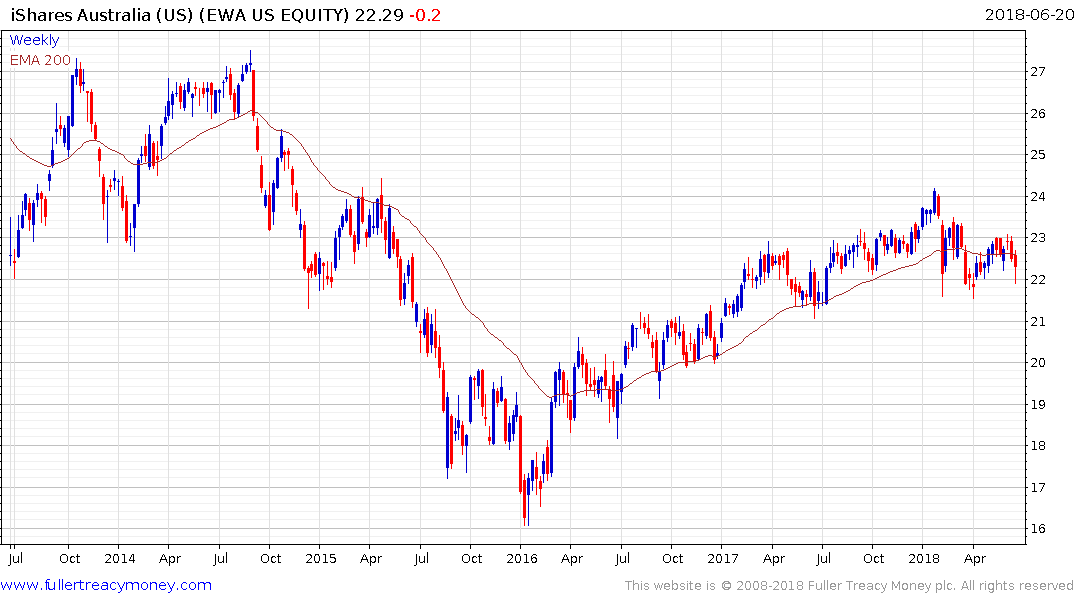 The inverse correlation between the stock market and the currency is a factor also evident in both Japan and Europe. The US Dollar denominated iShares MSCI Australia ETF has bounced from region of its lows for the year but needs to sustain a move back above the trend mean to confirm a return to demand dominance beyond short-term steadying.