Special Report: Fade the Front Cover
Comment of the Day

There is a common refrain that “demographics is destiny.” The difference between then and now is that we had a population profile with so much more vitality in the 1920s. We started that decade with a median age of the population at 29 years — today it is 38 years. The share of the population over the age of 65 was 7% in the 1920s; today that share is on the precipice of hitting 20% for the first time in recorded history. Not to detract from retirees and their dominance, but they are savers, not spenders. When you have half the population under 30 years of age as you did in the 1920s, well, that does blaze the trail for a spending boom.

And guess what? There was capital deepening back then. Company executives were less focused on financial engineering but on improving the capital stock. So, the 1920s was renowned for a decade that saw 5% annualized growth in manufacturing productivity. We had a central bank then that seems to have understood that we can actually tolerate mild deflation as was usually the case in peacetime periods (as my old chum Gary Shilling always points out). Only today is inflation seen as a desirable outcome — because today’s central bankers are consumed with bailing out debtors and penalizing savers. But inflation erodes real purchasing power — something today’s central bankers don’t tell you.

If demographics is destiny then India is the place to be. Half of the population is younger than 25 so the country’s demographics are better than the USAs in the early 1920s. That young population has also aided young countries during the pandemic so they are better placed to growth as the global economy recovers.

The stock market has recovered impressively from the lows a year ago and is now somewhat overextended relative to the trend mean. That performance has been bought with a significant fiscal spending spree and the desire of investors to purchase growth where they can find it. That does nothing to hedge the emotionality of the market and its tendency to post large downside moves from time to time. 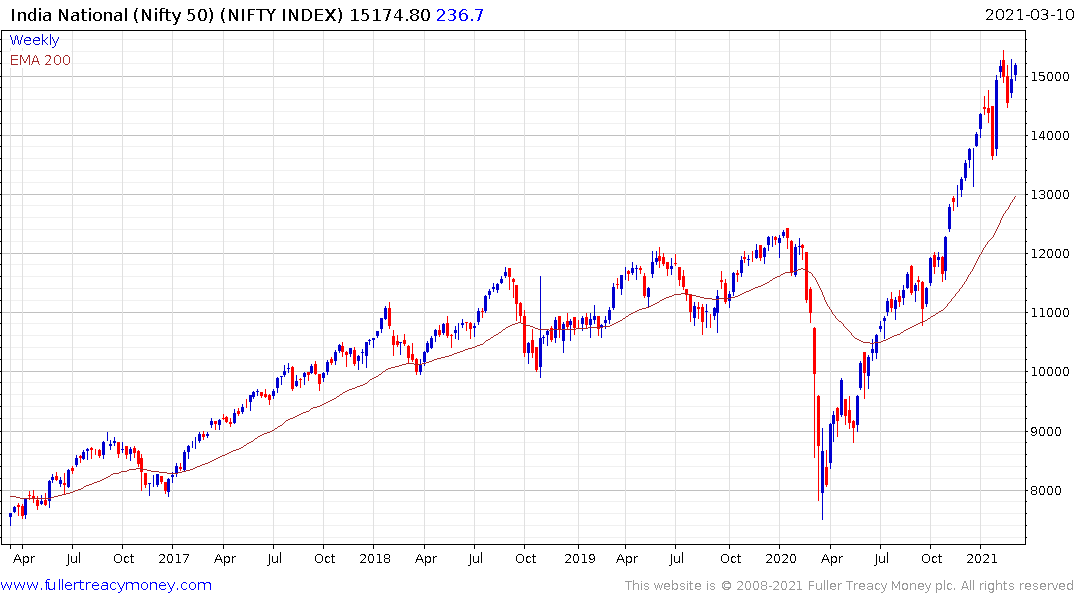 The fact that India is viewed as a counterweight to China geopolitically, has a large young population, a large wealthy diaspora, educated population (many of whom speak English) and nascent manufacturing sector all point to India being a buy on the dips for the foreseeable future; provided governance continues to improve.