Soybeans Buoyed as China Turns to U.S. for Nearby Supplies
Comment of the Day

Soybeans Buoyed as China Turns to U.S. for Nearby Supplies by Eoin Treacy

China is looking for more U.S. soybeans after top exporter Brazil suffered from a drought that delayed planting and now downpours that slowed harvesting. The Asian nation needs so much of the oilseed to feed a growing pig herd that it already bought supplies for delivery in August, at the end of the U.S. season, and for 2021-2022.

China’s interest in nearby U.S. supplies comes after Chicago soybean futures slumped more than 7% last week, or over $1 a bushel, the worst performance in more than six years. Crop prices recouped some of their losses on Monday, but remain well down on their multiyear highs earlier in January.

Corn futures in China are also down from record highs this month, tracking Chicago prices and pressured by sales from state wheat stockpiles. In terms of South American supplies, Brazil is heading for a record soybean crop after rains, while dryness is still threatening the production outlook in Argentina.

2020 was a year of plagues. The coronavirus pandemic disrupted supply chains. The swine flu killed off millions of hogs all over the world. The plague of locusts devastated harvests in East Africa, India and southwest China. Spring floods in the USA may also have had an impact on both harvesting winter crops and the overall planting schedule. 2020 was also the year much stricter emissions rules came into effect for the shipping sector so it was going to be a disruptive year because plagues arrived.

Pork is a food staple in China and the only way to rebuild the herd is to feed piglets. That’s means outsized demand for soybeans. However, it is also occurring at a time when more people are cooking at home. That increases demand for soy sauce. 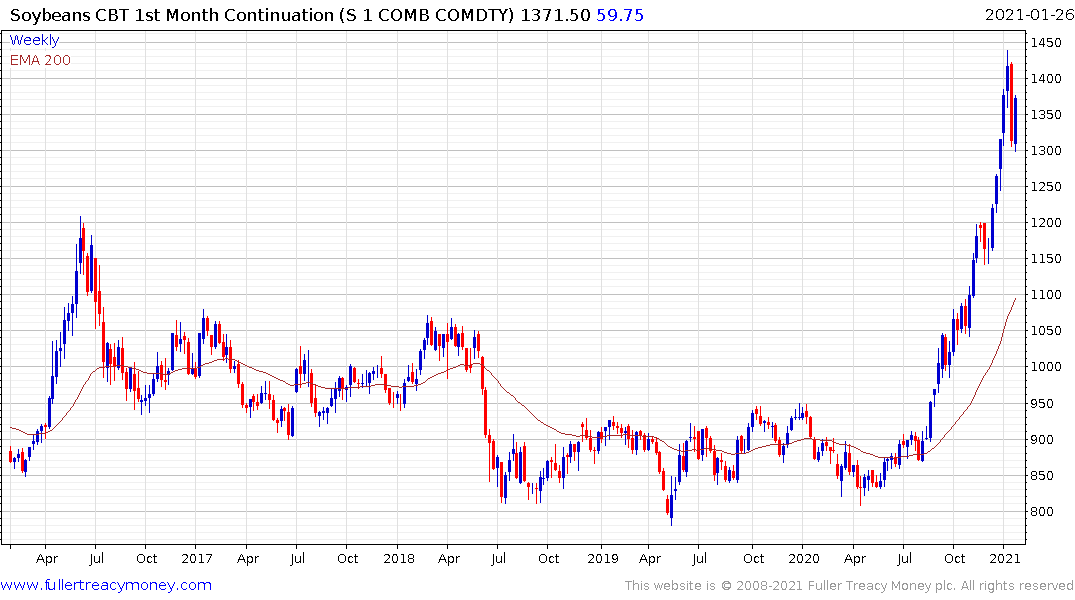 Soybeans broke out of its six-year base formation in November and paused over the last couple of weeks in the region of 1400₵. It firmed today and a sustained move below 1300₵ would now be required to question the consistency of the 10-month uptrend. 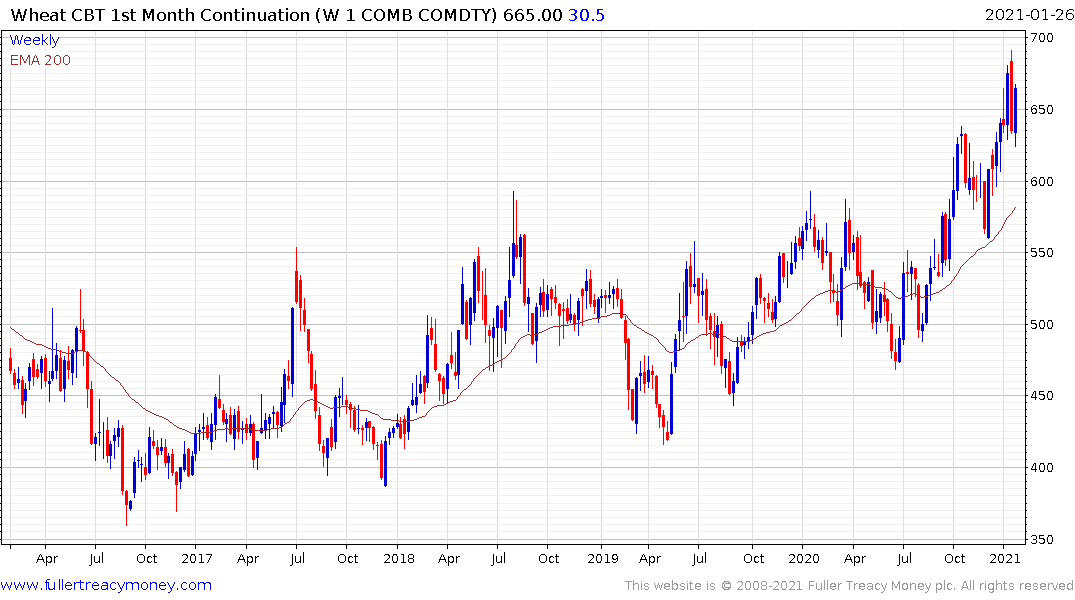 Wheat has been less explosive on the upside but it has also completed its base formation and continues to hold a sequence of higher reaction lows. 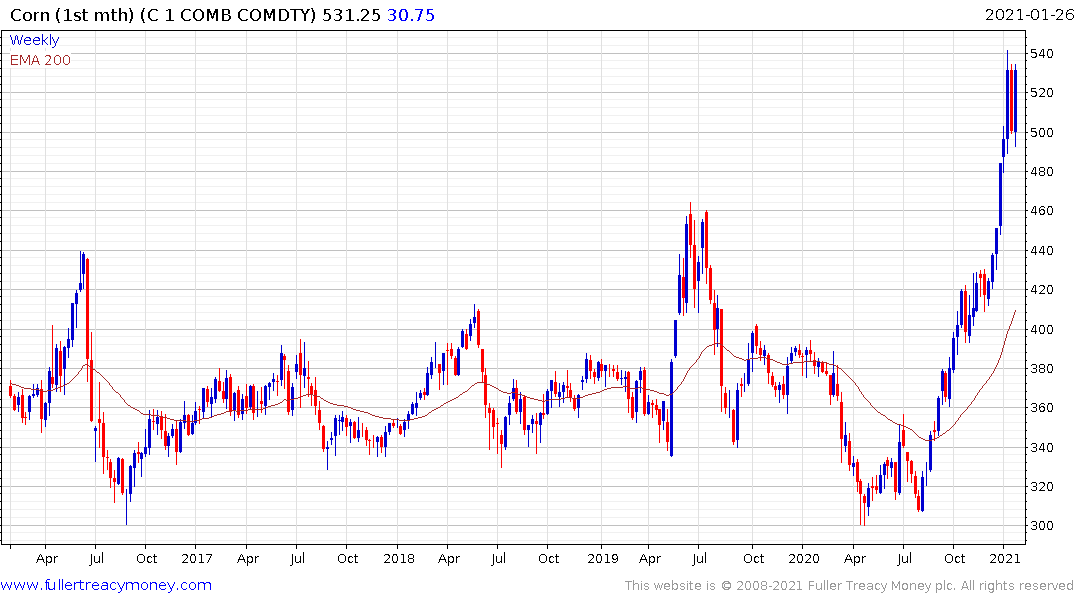 Corn firmed today from the 500₵ level and has now also completed its base formation. 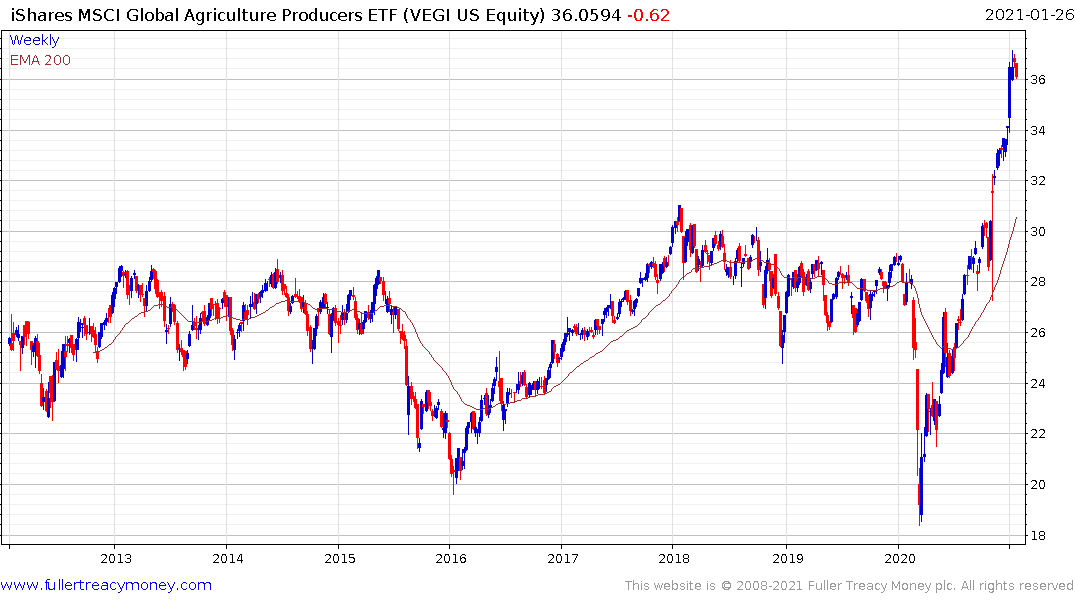 The iShares MSCI Global Agriculture Producers ETF (VEGI) broke out of a lengthy range in November. It is short-term overbought but a sustained move below the $30 area would be required to question scope for further upside.