Small investors can make gains by going against the grain - so is now the time to pick up Rolls-Royce shares?
Comment of the Day

Small investors can make gains by going against the grain - so is now the time to pick up Rolls-Royce shares? by Eoin Treacy

It will be interesting to see whether the Dreman screens pick up Rolls-Royce, which has gone from stock market hero to zero in the space of little over a week.

The share price has tumbled over 16 per cent since February 13, when it said 2014 would see a ‘pause’ in revenue and profit growth in 2014. The warning wiped £3.5billion off the value of the jet engine maker.

The movement out of the stock was pronounced and supported by heavy trading volumes up until Wednesday when the buyers returned. The analysts who cover Rolls reckon the sell-off has been overdone.

The Broker Forecasts site monitors stock recommendations and price targets attached to shares. On the figures it has collated the average valuation for Rolls is 1,287p a share, or around 28 per cent above the current market price.

If that consensus target is correct then the investors who sold have pushed the price too far down, providing a buying opportunity. Most analysts (67 per cent) are positive on Rolls, according to Broker Forecasts. So Rolls looks, on the face of it, to be ‘oversold’.

But there are several reasons why this may not be a slam dunk ‘buy’. It is worth remembering analysts are sometimes slow to recognise the magnitude of problems at companies they are paid to follow. It should also be noted the profit warning is just one reason sentiment has turned.

?There are also concerns about a Serious Fraud Office investigation into bribery allegations, potential accounting issues and fears Rolls might make an expensive and rash acquisition.

Rolls Royce was among the original cast of Autonomies because of its globally diversified revenues, dominance (with GE) of the international market for turbines, strong balance sheet and reasonably reliable record of increasing dividends. However, while those attractive characteristics helped propel the share from a 2008 low near 209p to a January peak of 1294p future prospects will be judged on its ability to further enhance shareholder value. 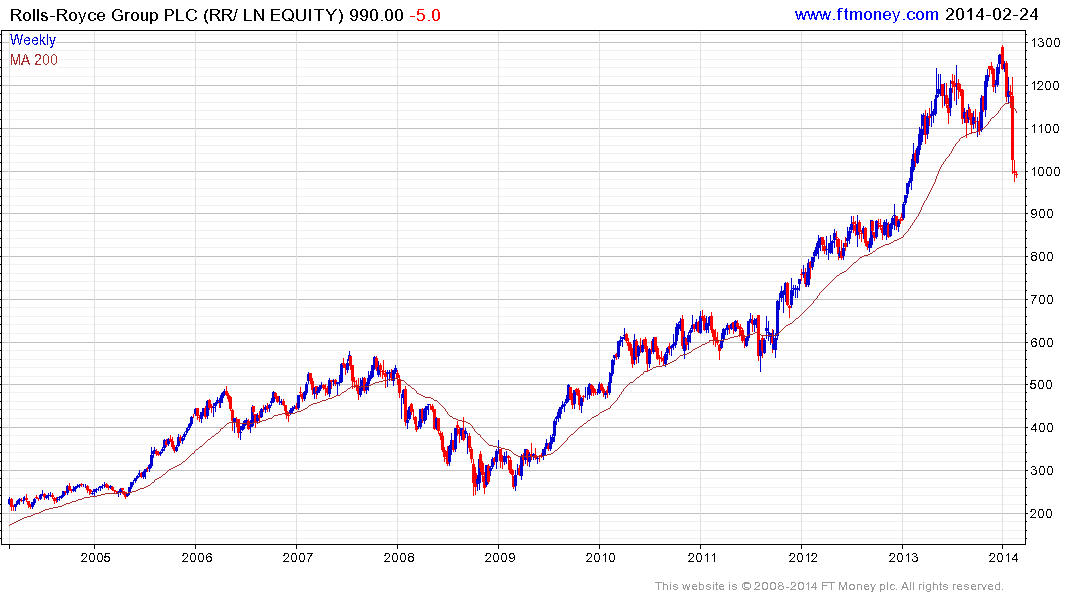 The share had been trending consistently until it became more overextended relative to the trend mean than at any time in the last few years in 2013. It then failed to sustain the breakout to new highs in January and has just experienced what we describe at The Chart Seminar as a massive reaction against the prevailing trend which symptomatic of Type-2 trend endings. It would be impossible to describe Rolls Royce as a consistent trend any longer.

Despite this fact the share is oversold in the short term so there is potential for a reversionary rally back up towards the now declining moving average. 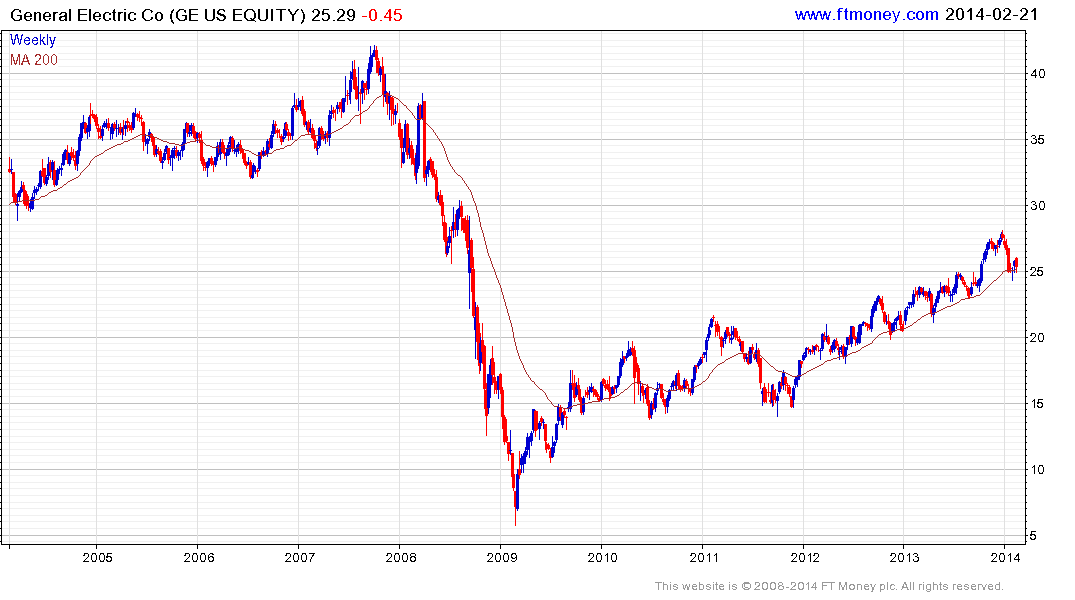 Meanwhile GE (Est P/E 14.91, DY 3.48%) remains on a recovery trajectory and has paused in the region of its 200-day MA following its recent pullback. Potential for additional medium-term upside can be given the benefit of the doubt provided it continues to hold in this area.