Most-active silver futures declined as much as 5.5% to $27.81 an ounce on the Comex after the CME Group said margins will rise to $16,500 per contract from $14,000, effective Feb. 2. The decision was based on “the normal review of market volatility to ensure adequate collateral coverage," it said.

“Fundamentally I don’t believe that there are any significant short positions in the silver market, as the outlook for silver is robust this year, coming off a strong performance in 2020," Wendt said.

As the frenzy built, BlackRock Inc.’s iShares Silver Trust recorded an unprecedented $944 million net inflow on Friday, followed by another $551 million on Monday after a since-removed post appeared on the WallStreetBets forum that encouraged traders to pile into the exchange-traded product. That move now appears to be fizzling out, with some on Reddit urging their fellow investors to back away from silver.

“We suspect that prices will remain volatile," James Steel, chief precious metals analyst at HSBC Securities (USA) Inc., said in a note before the margin increase was announced. “Beyond this week, and possibly sooner, we believe the new entrants into the market may tire and begin to liquidate silver holdings, with a commensurate price impact. Buyer beware!"

Raising margin requirements for futures trades always has an impact on prices. It’s the primary tool used by exchanges to ensure orderly markets and it has had a negative effect on silver today. That helps to confirm resistance in the region of the upper side of the range and suggests some additional consolidation is likely.

The big difference between silver and GameStop is there is a fundamental reason for being interested in silver. The world is awash with liquidity and governments are intent on achieving their inflation goals come what may. That adds up to a devaluation in the purchasing power of currencies and resulting demand for real assets. 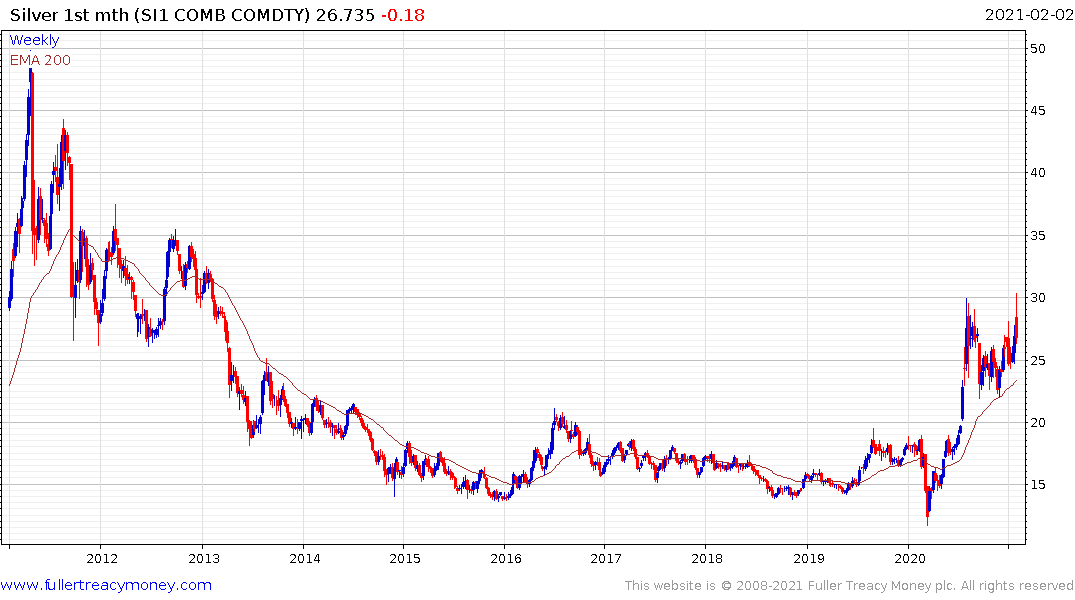 David’s mantra from the last bull market is don’t pay up for commodities. That’s because they are prone to volatility and break outs fail more than they succeed. Of course, when they go, they can really move on the upside very quickly. I’ll be using any additional weakness to increase my position. 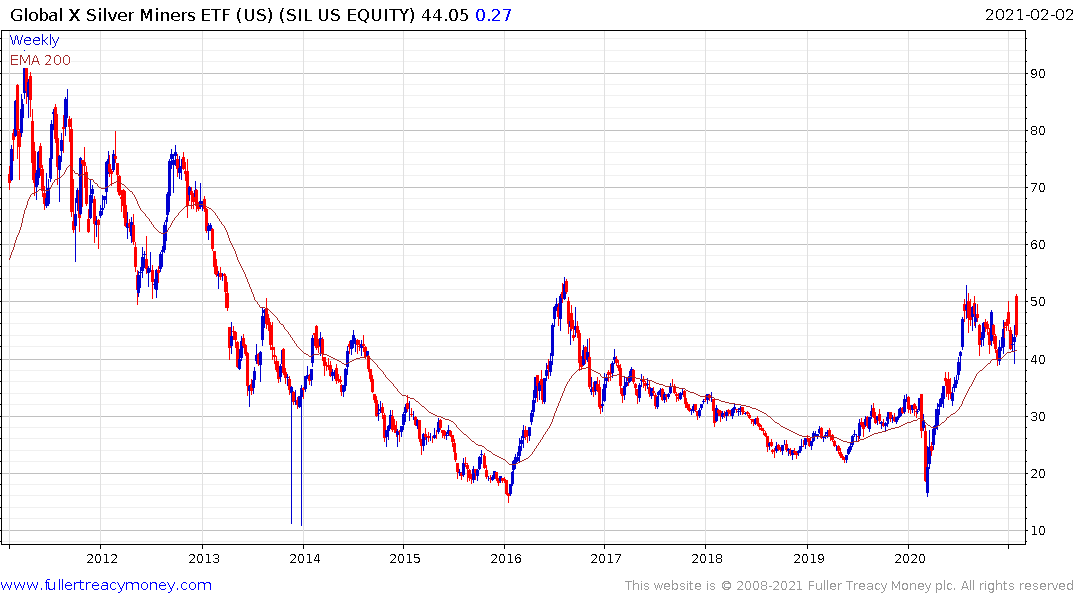 The Global X Silver Miners ETF (SIL) reversed yesterday’s pop on the upside today and continues to pause in the region of the 2020 and 2016 peaks. 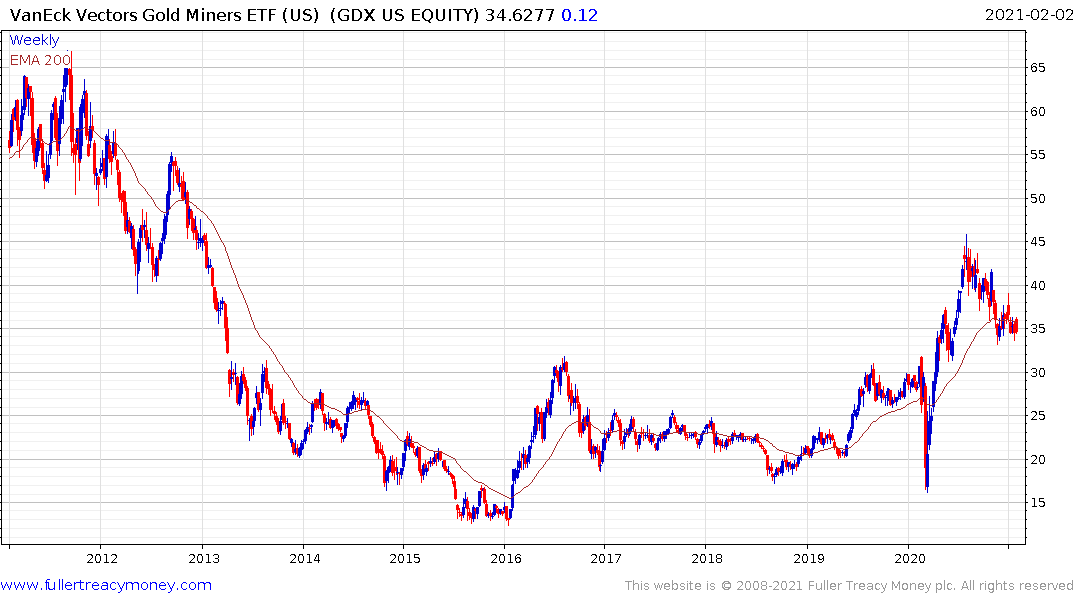 The VanEck Vectors Gold Miners ETF (GDX) continues to form a first step above the base and a sustained move below $30 would be required to question medium-term scope for continued upside. 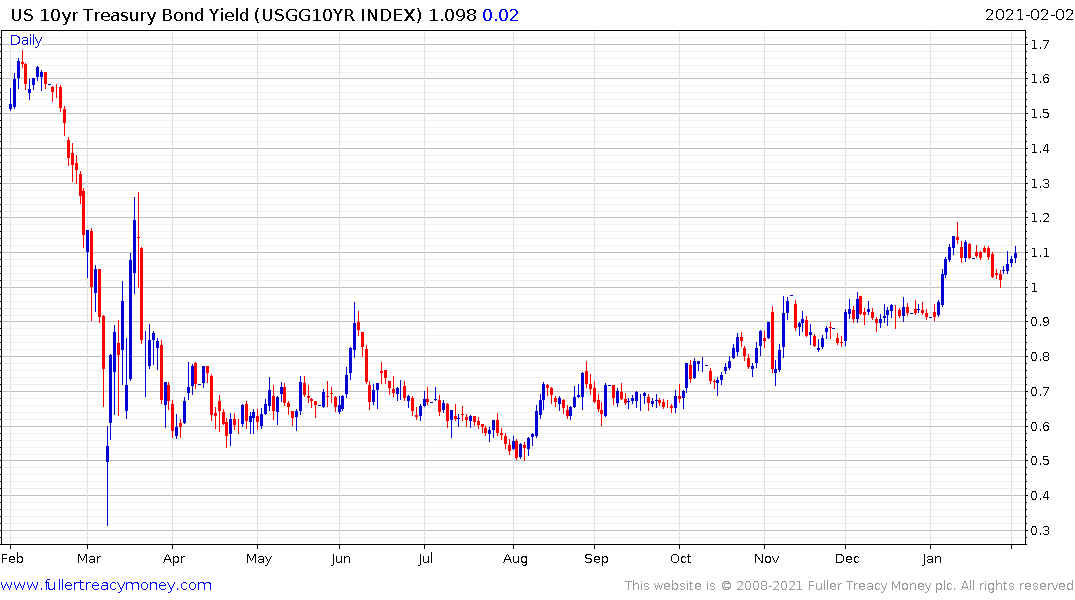 The Dollar also continues to unwind its oversold condition and that is also weighing on commodities of all types. US Treasury yields back up again, confirming resistance in the region of the 1% level. 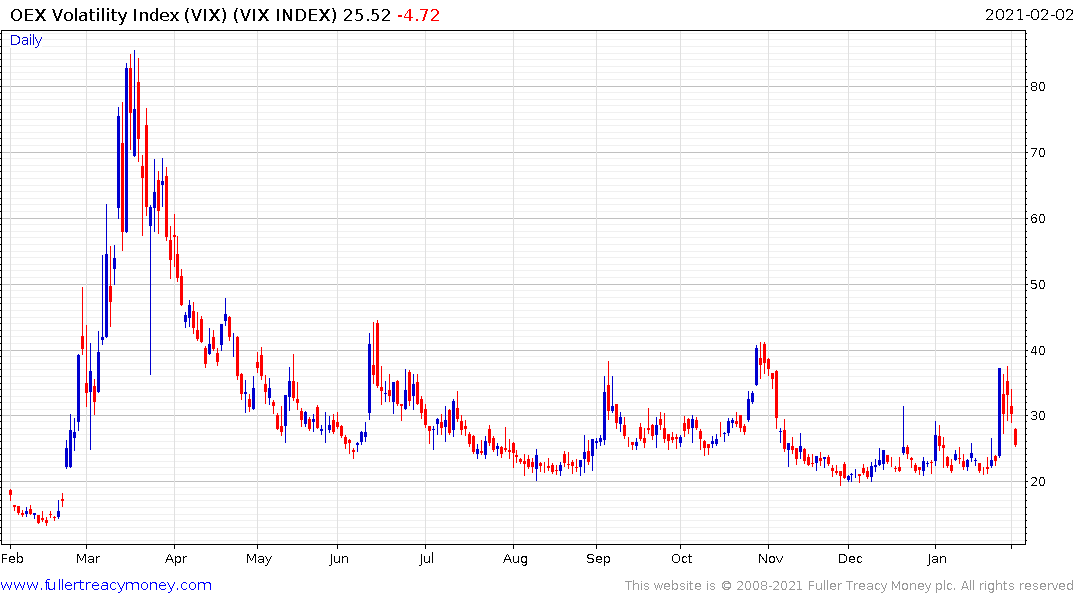 The biggest exception is oil which hit a new recovery high today. That coincided with the VIX Index contracting below the trend mean which helped to boost stocks and traders buy the small dip.