“Silver is currently trading at close to a record discount to gold, which should attract demand,” Goldman Sachs Group Inc. said in a note this month. “Silver often tends to lag gold at the beginning of a precious rally, and catch up to it as the rally continues and investors look for ways to diversify.”

During the week through Tuesday, hedge funds and other money managers added to their bullish bets on silver, boosting net-long positions to the highest since late February, according to government data Friday. That amounted to “a larger-than-usual” US$638 million bullish flow spurred by the trifecta of rising haven demand, recovering industrial activity, particularly in China, and South American supply disruptions, according to Societe Generale SA analysts including Michael Haigh.

Green Stimulus
Unlike gold, silver’s price is largely driven by a host of manufacturing applications. Morgan Stanley estimated that industrial demand makes up 85 per cent of silver demand. The metal may be poised to benefit from a push toward less-polluting energy technologies such as solar power, according to BMO Capital Markets.

With eyes on recovering industrial demand in countries including China, the world’s largest consumer of industrial commodities, some investors may be buying silver as a bet on new technology. U.S. Democratic presidential nominee Joe Biden outlined a goal last week of “a carbon pollution-free power sector by 2035” -- a move that would require rapid acceleration in the deployment of renewable wind and solar power as well as electricity storage, while continuing to rely on emission-free nuclear power.

“Silver-intensive areas such as 5G and solar technology could well benefit from any fiscal impulse,” BMO analysts including Colin Hamilton said in a research note. “More than US$50 billion of green stimulus has been approved by governments thus far this year, over which roughly three-quarters has been in Europe. But perhaps more impactful has been the recent Biden campaign Clean Energy plan, most notably a zero-carbon power grid by 2035 which would see new wind and solar capacity built to displace thermal generation.”

The price of any asset is influenced by the actions of marginal buyers. Therefore, new sources of demand and limitations on supply tend to have an outsized influence on the prevailing trend. Silver is used in solar panels, electronics and communications equipment. It also has healthcare applications as an antibacterial.

This report from Commodity Management LLC carries some additional information on the industrial demand potential for silver. Here is a section:

Some of the main components required for a 5G rollout consist of base stations, home devices (to replace wireless broadband), 5G Smartphones, 5G Antennas, Radio frequency front-end module components, and optical transceivers. Despite all that, the rise in silver demand from the 5G revolution will not so much be driven by the direct rollout of 5G enabled hardware, but will manifest itself particularly through an expanded range of capabilities in which silver can play a significant role. This new 5G enabled ecosystem will create incremental demand for semiconductor ICs/chips, memory, passive components, cabling, power distribution, IoT devices, and MEMS sensors, each of which uses silver products similar to the semiconductor segment.

We briefly discussed MLCCs and their past and expected silver demand from 5G technology. But MLCCs are only one segment where we foresee silver demand growth due to a 5G rollout. We have identified many other applications as discussed previously that can roughly be grouped into six segments. At present, the 5G deployment is still in its early days, and as such, demand for silver constitutes approximately 7.5 Moz or 0.75% of current annual supply. With the rollout of 5G in the coming years, all the above segments are expected to benefit and push 5G enabled silver demand from these electronic applications to approximately 16 Moz by 2025 and as much as 23 Moz by 2030, or approximately 2.3% of annual supply 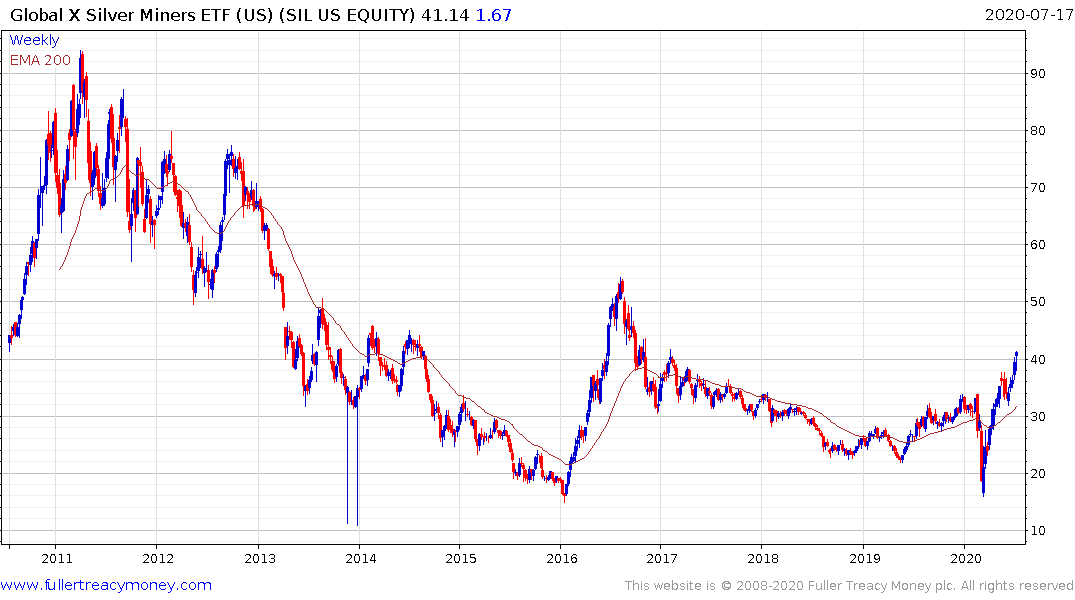 On the supply side, the vast majority of silver miners were forced to diversify into gold during the bear market because silver mining was uneconomic. That suggests there has been no investment in additional silver supply for the last few years. 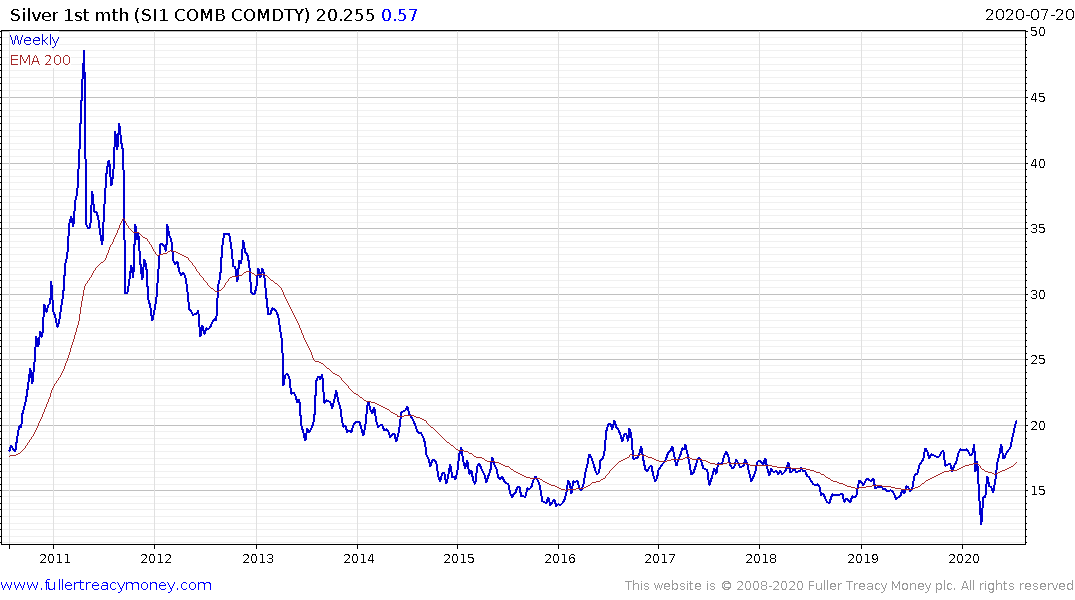 The price cleared the psychological $20 area today and a sustained move below the 200-day MA would now be required to question near-term scope for additional upside. 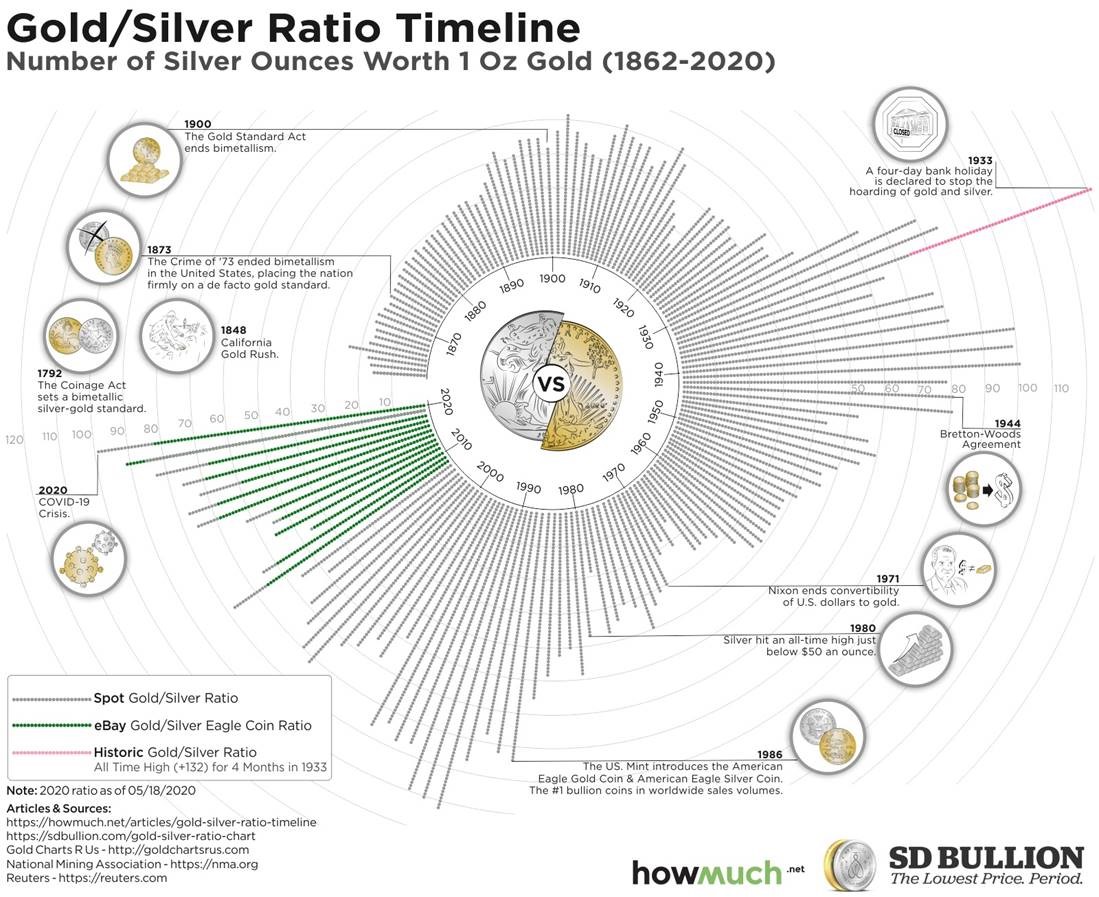 Thanks to a subscriber for graphic depicting an alternative way of looking at the Gold/Silver ratio may also be of interest.