content machine, dominating the majority of phones worldwide. Now “what’s on your mind?”

Four hundred hours of video are uploaded to YouTube every minute, which means that Google has more video content than any other entity on earth. It also controls the operating system on two billion Android devices. But AT&T needs to divest Adult Swim?

Perhaps Trump is right that the merger of AT&T and Time Warner is unreasonable, but if so, then we should have broken up the Four ten years ago. Each of the Four, after all, wields a harmful monopolistic power that leverages market dominance to restrain trade. But where is the Department of Justice? Where are the furious Trump tweets? Convinced that the guys on the other side of the door are Christlike innovators, come to save humanity with technology, we’ve allowed our government to fall asleep at the wheel.

Capitalism trends towards concentration as the large and strong consume the weak. Despite claims to the contrary, it in the interests of company executives to ensure the company they work for comes out on top by whatever means necessary. It is rare in the extreme that fines levied, after the fact, match the benefit from ensuring a competitor’s demise. Therefore, large companies, that dominate their respective niches, tend to persist for as long as they retain the hunger to dominate.

Hubris’ is symptom of decay in any empire because it reflects the assumption the status quo will be sustained without active engagement to evolve with the changing environment. Apple’s device slowing software, in the assumption its acolytes will automatically trade up to the next model, is the first sign of hubris for a company that has put customer engagement and satisfaction at the top of its priority list.

Capitalism’s trend toward concentration is the natural order of things and has been highly evident within the Autonomies over the last couple of years. Mergers announced between Dow Chemical and DuPont or Reckitt Benckiser’s and Mead Johnson are examples from the last year of large companies becoming larger through acquisitions.

However, no trend persists indefinitely and the natural conclusion to concentration is antitrust. The larger and more influential the AAAF companies become the greater the likelihood they will eventually become subject to antitrust. However there is no real sign of this threat just yet. 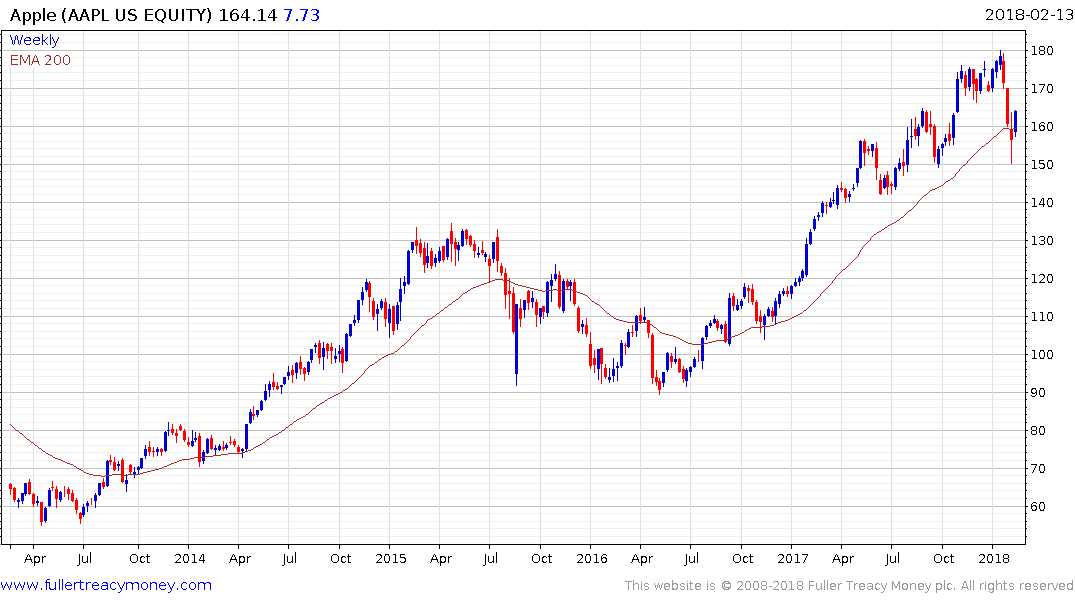 Apple has paused in the region of the trend mean following last week’s decline. Support building is likely if the medium-term trend is to be sustained, while the $150 area will need to hold if a deeper reaction is to be avoided. 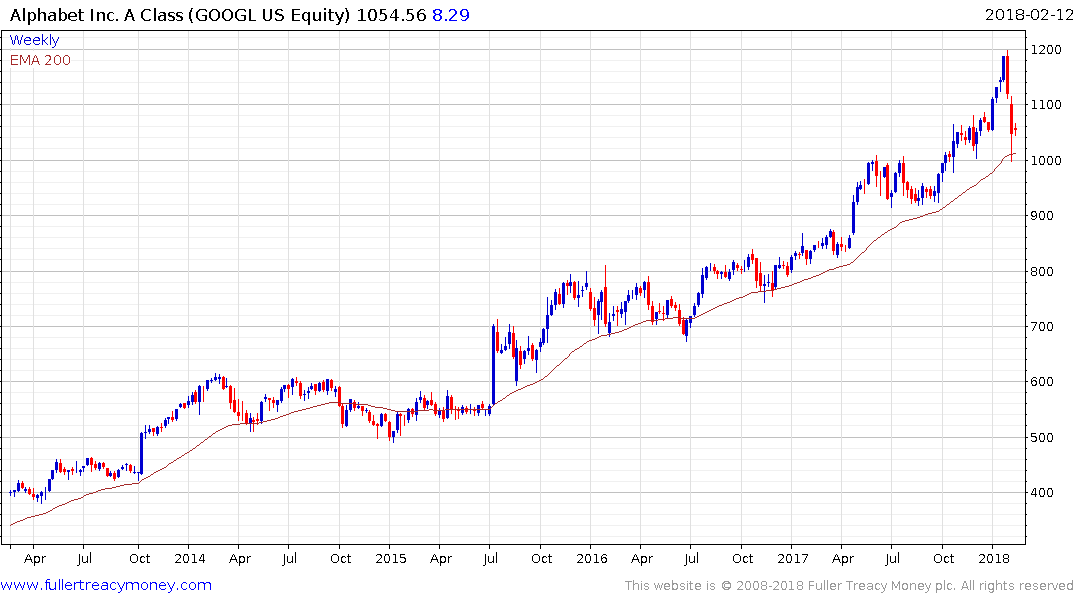 Alphabet experienced its largest pullback since 2008 over the last couple of weeks and will need to hold the $1000 area, which also coincides with the trend mean, if the medium-term uptrend is to remain intact. 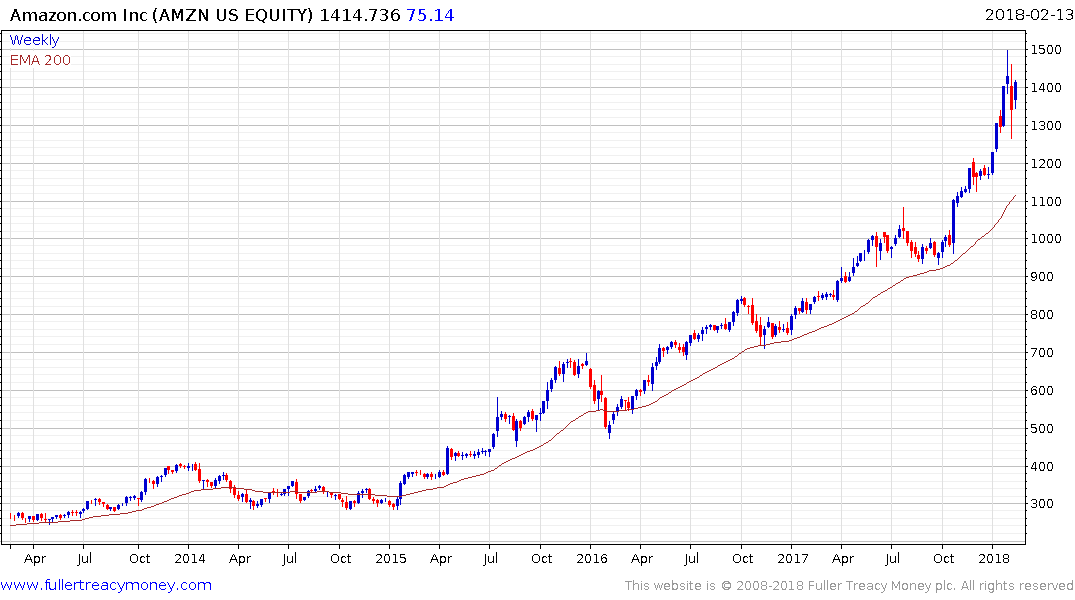 Amazon’s reaction to date has been limited to a $200 pullback based on closing levels. Ranging remains likely as the overextension relative to the trend mean is unwound while a swifter retracement remains a possibility. 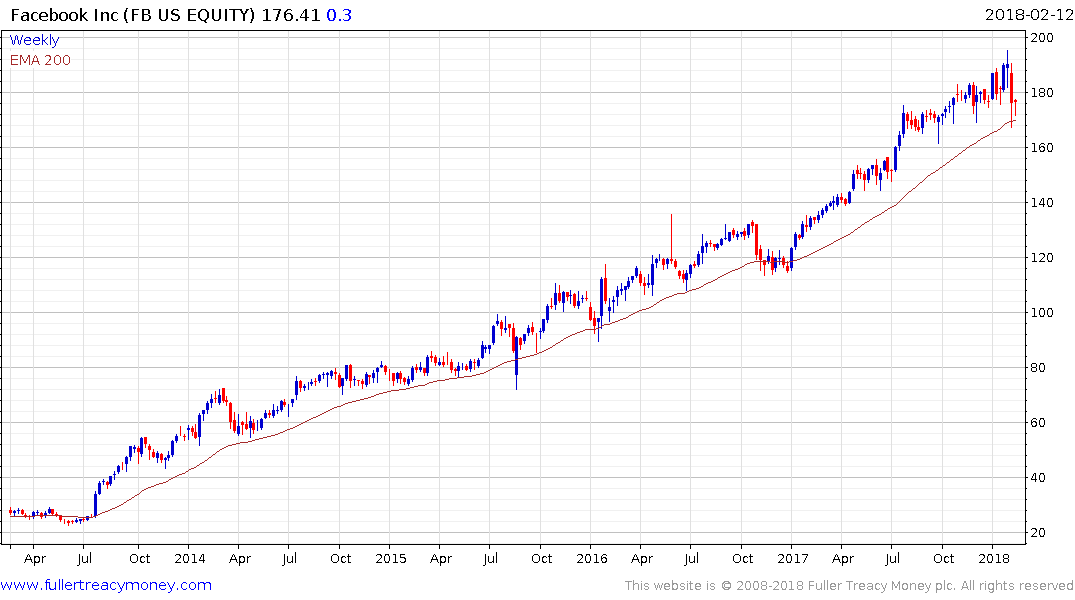 Facebook has found support in the region of the trend mean on successive occasions over the course of the last few years and is testing that area once more. If the medium-term trend is to remain consistent it will need to continue to hold the progression of higher major reaction lows.

All of these shares have experienced somewhat larger pullbacks than seen in the last year so investors are obviously asking whether this is a buying opportunity or an evolving top formation. The most likely scenario after such a swift pullback is at least a period of support building. How well support is found during that process will dictate the extent to which trends can be sustained.