The pound has been hobbled in recent weeks by concern about the U.K.’s political risk as the contest to elect the next prime minister approaches its endpoint, with front-runner Boris Johnson keeping a no-deal Brexit on the table. The pound has fallen about 2% since Prime Minister Theresa May indicated that
she would be stepping down.

“A general pound malaise has taken us through the lows from Friday,” said Jeremy Stretch, head of G-10 currency strategy at Canadian Imperial Bank of Commerce. “It looks increasingly probable that second-quarter GDP is likely to be negative for the first time since the end of 2012. With the third-quarter outlook also poor, this will add to debate about the BOE joining the global easing trend.”

Until quite recently the Bank of England was talking about raising rates. That is a near impossibility today given the global growth outlook and the trajectory of policy in response to deteriorating data.

If the UK economy is slowing as quickly as the above article suggests that is likely to represent a headwind for the Pound. What is less understood is the impact of negative yields on the City and how losses are accruing across the financial sector. Since finance represents such an important part of the UK economy that is a point worth considering.

The contentious Conservative Party leadership contest and the adopting of a Remain stance by the Labour Party suggest the next election is going to be a polarised vote on leave or stay. That suggests optionality in the Pound’s pricing. 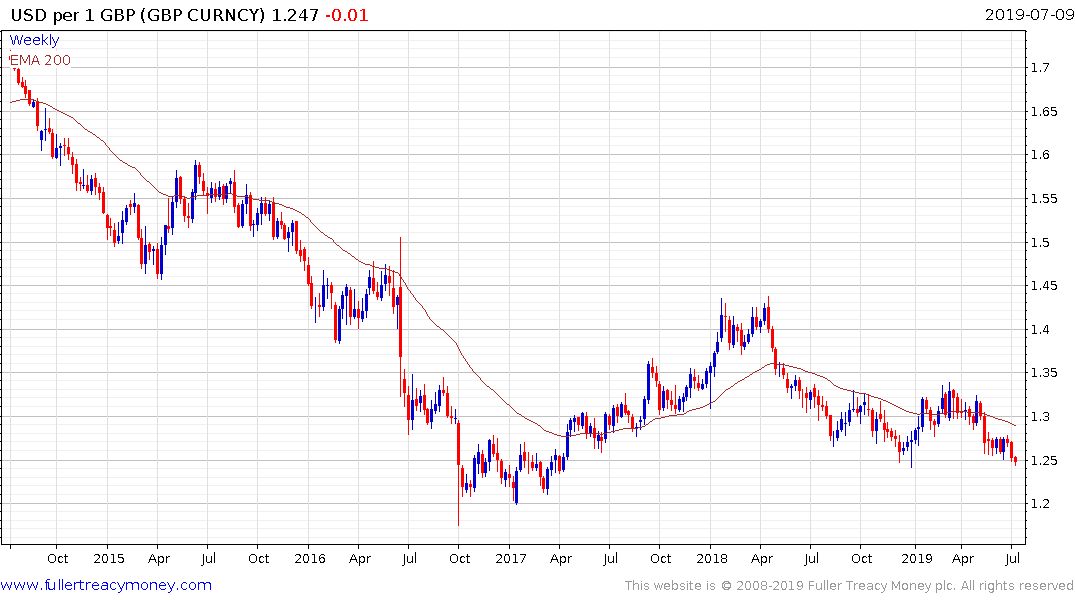 The Pound has already priced in a lot of bad news as it tests the region of the January lows. A clear upward dynamic will be required to confirm support in this area.