Signaling No Change in China's Course, Xi Warns Against Cold War
Comment of the Day

“To build small circles and start a new Cold War, to reject, threaten or intimate others, to willfully impose decoupling, supply disruptions, or sanctions, or to create isolation or estrangement, will only push the world into division and even confrontation,” he said.

Xi’s speech had been widely anticipated for the tone it would set for relations between the world’s biggest economies over the next four years. Though Xi did not name Biden by name, many of his comments were clearly targeted at the new U.S. administration.

Xi repeated many of the same talking points about multilateralism and “win-win” outcomes that he deployed in his last address to Davos four years ago, days before Donald Trump’s inauguration, but he also signaled that he does not intend to change course in the face of U.S. pressure.

“Each country is unique with its own history, culture and social system, and none is superior to the other,” Xi said, warning against imposing a “hierarchy on human civilization” or forcing one’s own systems onto others.

This all sounds very reasonable and is a perfect example of China’s efforts to exude a façade of reasonableness. Perhaps it would be better to measure China’s actions in the four years since Xi’s last speech to Davos where much the same call to embrace appeasement was made.

The incoming Biden administration might differ from the Trump administration on any number of points, but the tide has definitely turned against appeasing China. We can expect the form and texture of opposition to China’s increasing assertiveness to be different under President Biden but the direction is clear.

Taiwan is likely to be the flashpoint for conflict between the USA and China. US companies have invested heavily in building factories in Taiwan. China considers the island part of its territory. With Intel basically admitting it is falling behind TSMC’s capability, Taiwan represents a significant treasure bowl China has a clear incentive to control. 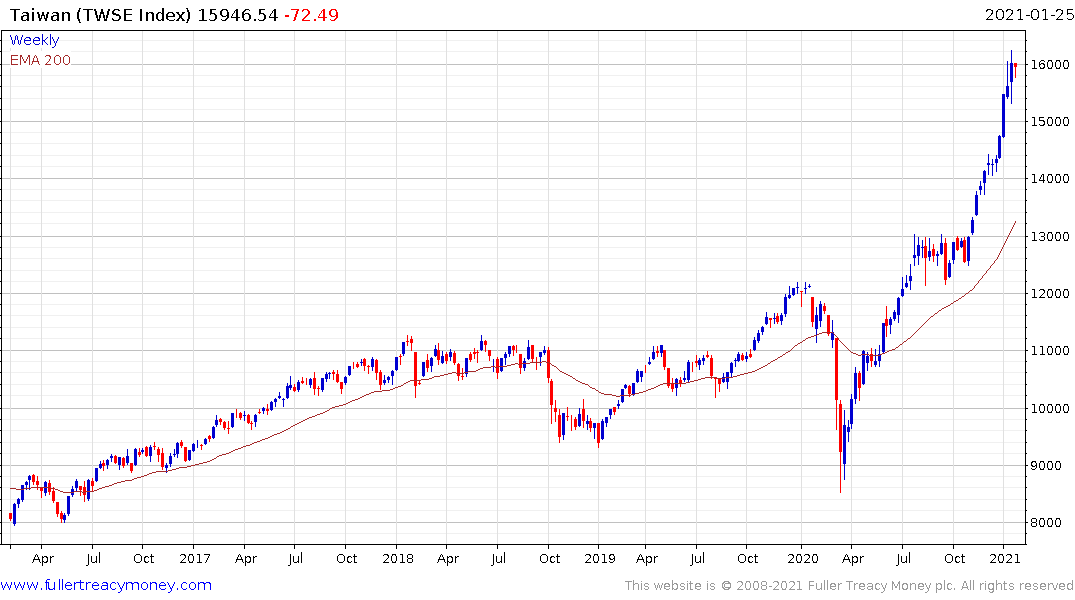 The TAIEX is paying this risk no heed and continues to extend its uptrend.