Demand was strong enough to push rates up, even with cancelled sailings restored and carriers adding temporary and even new permanent services on the lane,” said Freightos CMO Eytan Buchman.

“With reports of rolled shipments and container shortages out of China indicating the extent of the demand rush, carriers will likely introduce another China-US GRI for September, which would be the sixth in just three months,” said Mr Buchman.

In his weekly US import update report, Jon Monroe, president of Jon Monroe Consulting and a representative for Worldwide Logistics, said the big US retailers were “experiencing a major surge in online orders”, and were converting many of their stores to fulfilment centres.

He said, however, that the substantial freight price hikes were taking their toll.

“Importers’ budgets are ballooning and, in some cases, about to explode from having to pay the extremely high cost of transport,” said Mr Monroe. “The record high rates will undoubtedly cause bankruptcies in the worst case, and major budget excesses in the best case, scenarios,” he warned.

There a couple of complimentary trends that have resulted in a significant bump in container shipping rates over the last month. The first is the surge in demand for new furniture as people flee the confined environment of the city for the space of the suburbs. Bigger houses need more tables, chairs, sofas, desks and TVs. These are bulky items so demand for 40ft containers has surged.

Shipping inventory has also declined because of the cost of compliance with IMO2020 regulations. The hit to demand during the lockdowns was likely a significant negative catalyst for what was already a highly pressured sector.

Mrs. Treacy had been able to get a very low shipping rate for the last few years. That’s over now. It jumped 400% from last year’s container. The other piece of news I have seen no one else report on are the rolling blackouts in Guangdong. China’s exports are thriving at present and not least because of renewed demand from consumer retooling for working from home.

The floods on the Yangtze have also limited the ability of hydro power plants to generate electricity. One of the primary flood amelioration techniques for a dam is to limit power generation so the water can flow quickly through the dam. That could easily be the reason the blackouts are not being reported on. 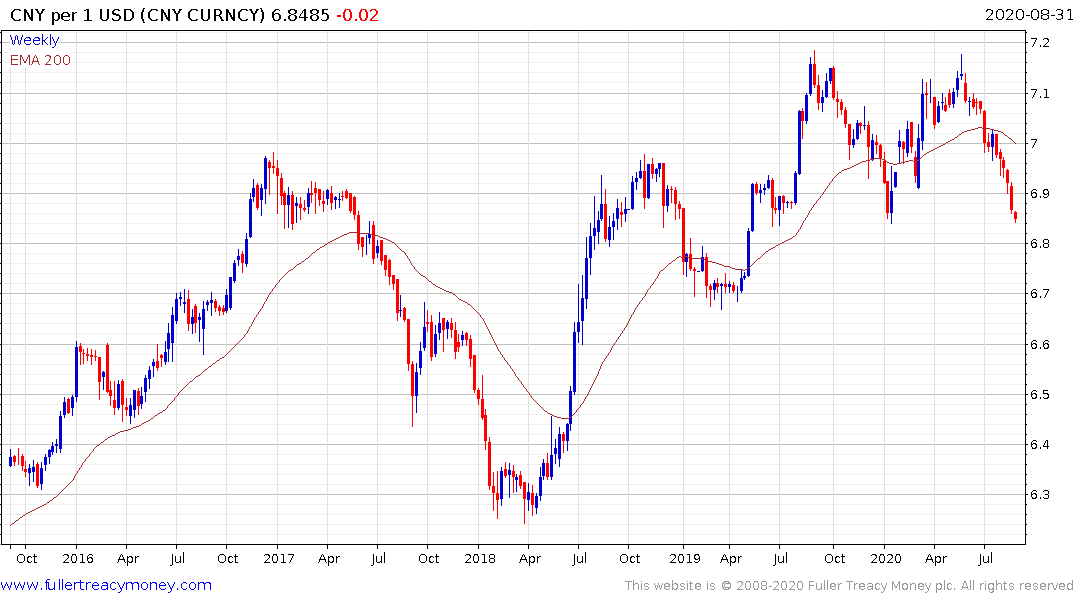 The Renminbi hit a new recovery high today against the US Dollar. It is short-term overbought so there is plenty of scope for some consolidation but this rally has been large enough to represent a significant inconsistency for the US Dollar’s uptrend. 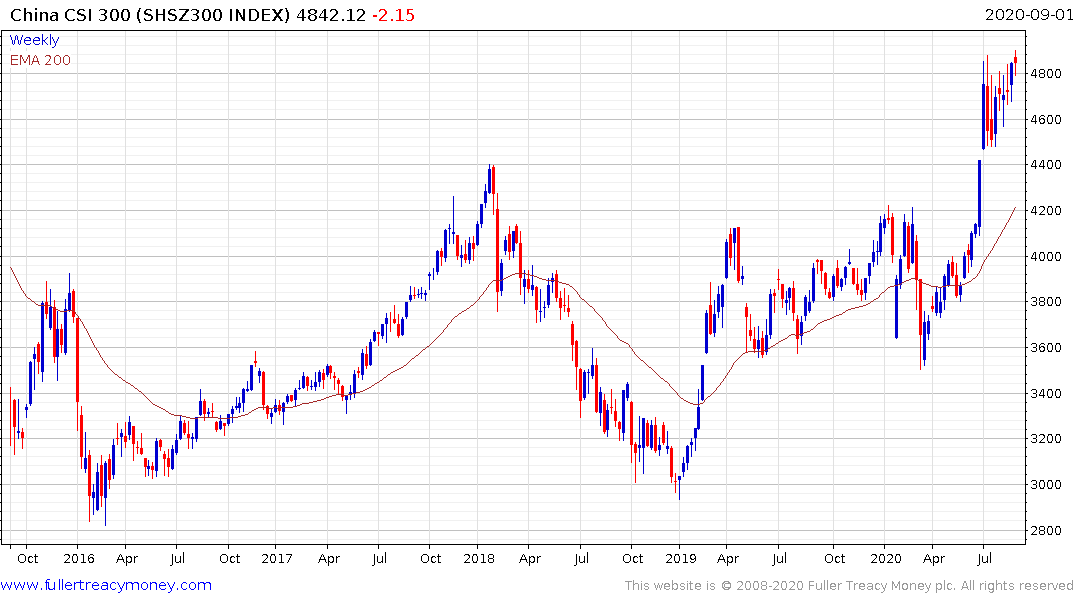 The CSI300 Index continues to firm from the region of the upper side of the two-month range. A break in the short-term sequence of higher reaction lows would be required to question potential for additional upside.