SepQ'21 gold producers preview: Across the board we are forecasting production to decrease by 2% QoQ, with AISC increasing by an average of 4%. We continue to flag industry cost pressures and impacts on productivity (i.e. skilled labour shortages in WA and border closures), noting that FY22E guidance for WA-based gold producers sees an average 11% YoY increase.

Broadly speaking, we see a supportive macro environment for gold with record fiscal and monetary stimulus, ultra-low interest rates and rising debt levels. However, prospects for potential QE tapering lead us to be cautious in the near term.

Despite some potential gold price headwinds in the near term, we see Australian gold producers as undervalued, trading at an average implied gold price ~12% lower than spot (Figure 8). Trailing P/NAV’s for our covered producers also highlight a clear disconnect between equities and the AUD gold price with senior producers trading on P/NAV's ~35% lower than their historical averages and intermediate/junior producers ~13%.

CPI is running at more than 5% which bolsters the view the Fed will begin to remove monetary accommodation. That suggests they may begin tapering next month which supports the view that financial conditions are unlikely to become any looser. 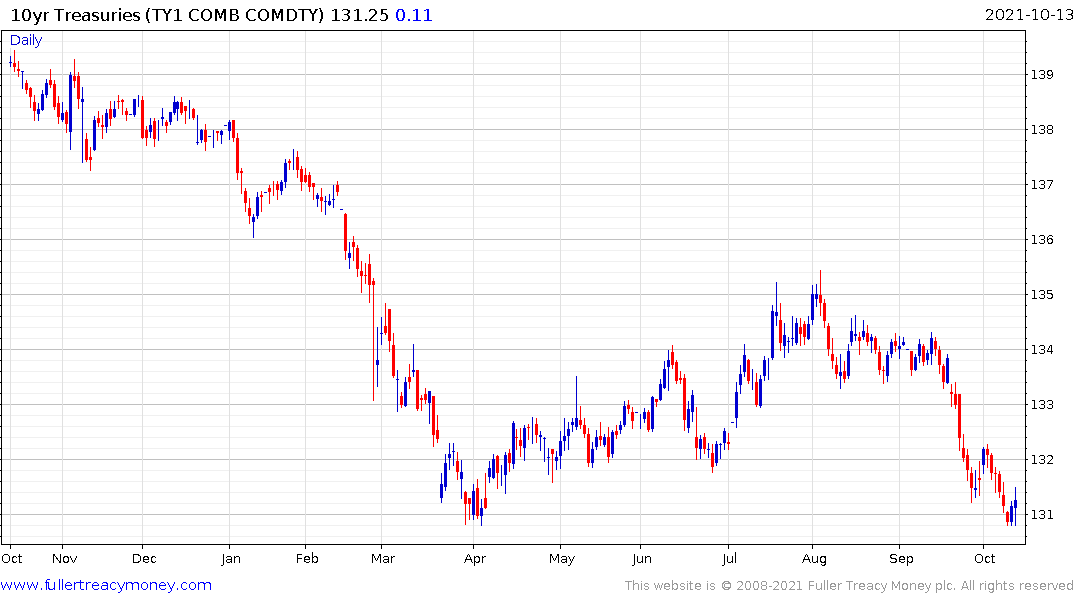 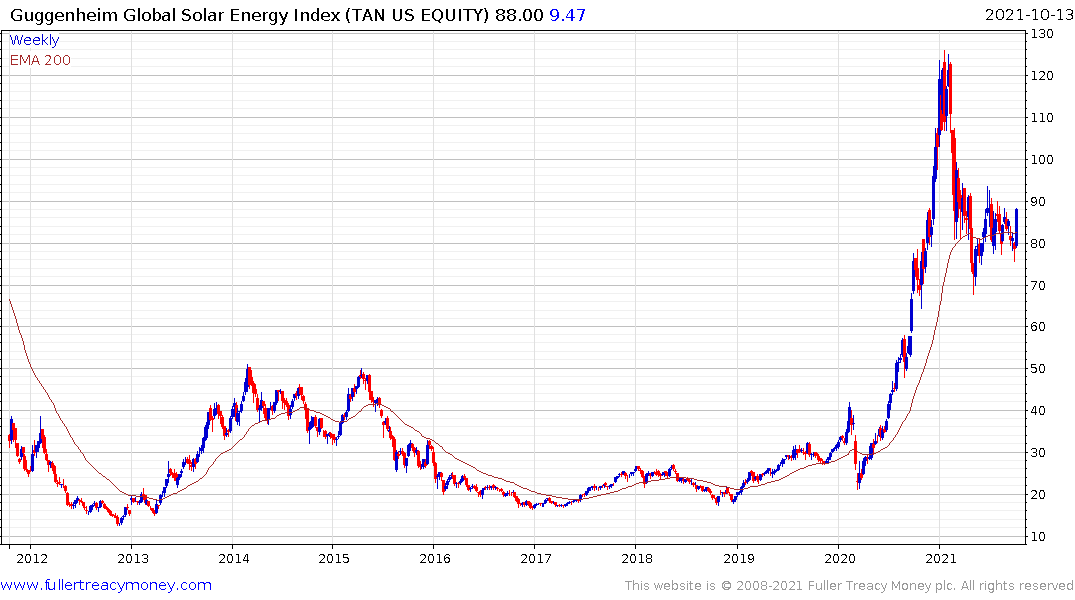 That is helping to support the bond market amid a short-term oversold condition for Treasury futures. Anything that brings down yields is viewed as a positive for the tech sector which helps to explain demand for semiconductor and solar stocks today.

The challenge for the broad market is companies are having a difficult time passing all of their rising costs onto customers. That’s likely to be a central theme during Q3 earnings calls. The big question is whether rising costs will deter spending decisions and lead to slower growth. That sounds like a catch-22 since slower growth would deter Fed tightening. There is nothing smooth and easy about this situation which suggests there is ample scope for volatility. 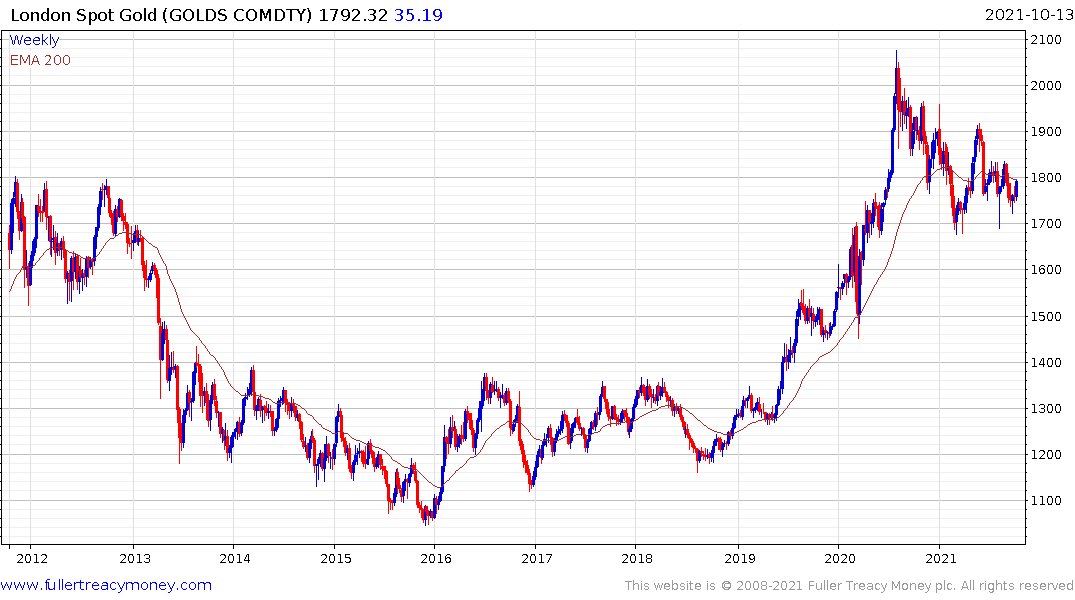 Meanwhile precious metals all rebounded in emphatic form today. Gold is back testing the 14-month sequence of lower rally highs and the region of the trend mean. A sustained move above $1830 will break the downtrend and confirm a return to medium-term demand dominance. 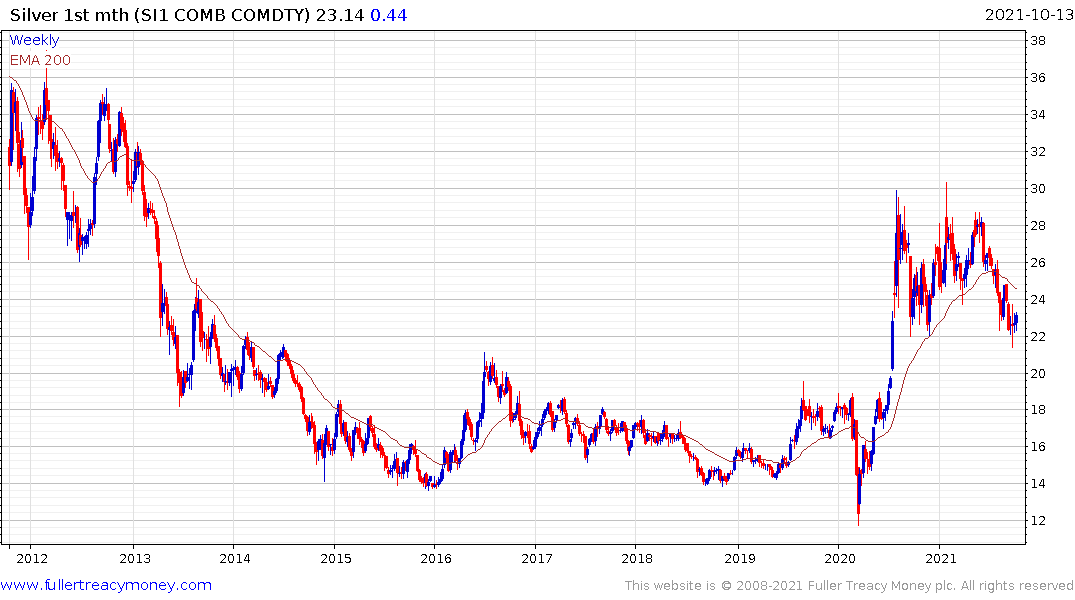 Silver failed to sustain the downward break below $22 and is now bouncing back up into the overhead range. If this rebound holds, there is clear scope for a retest of the upper side of the range near $30 over coming months. 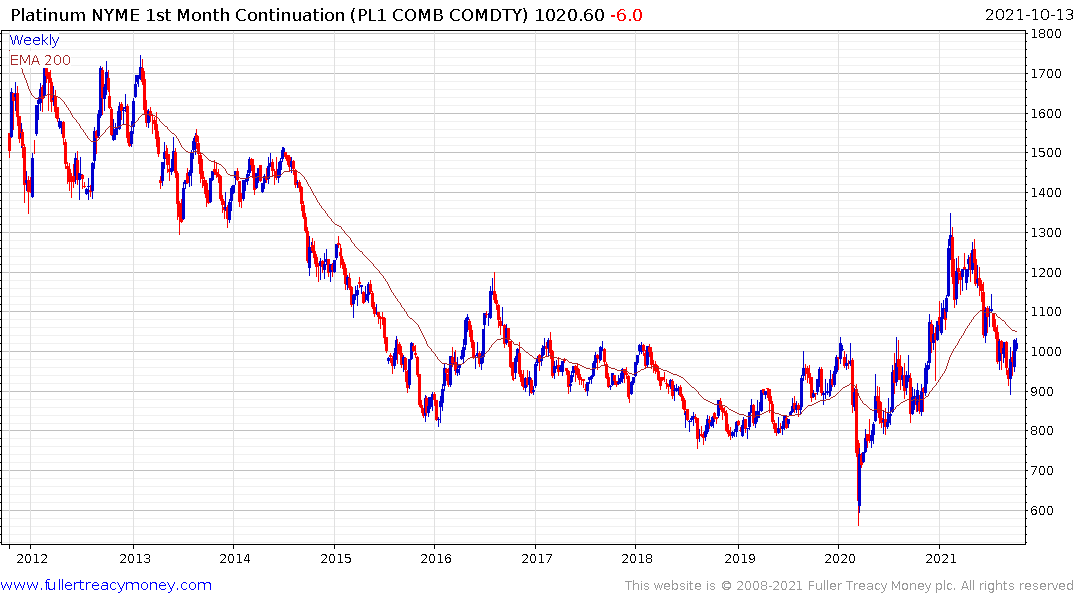 Platinum has bounced back above the psychological $1000 level and has broken the 8-month downtrend. 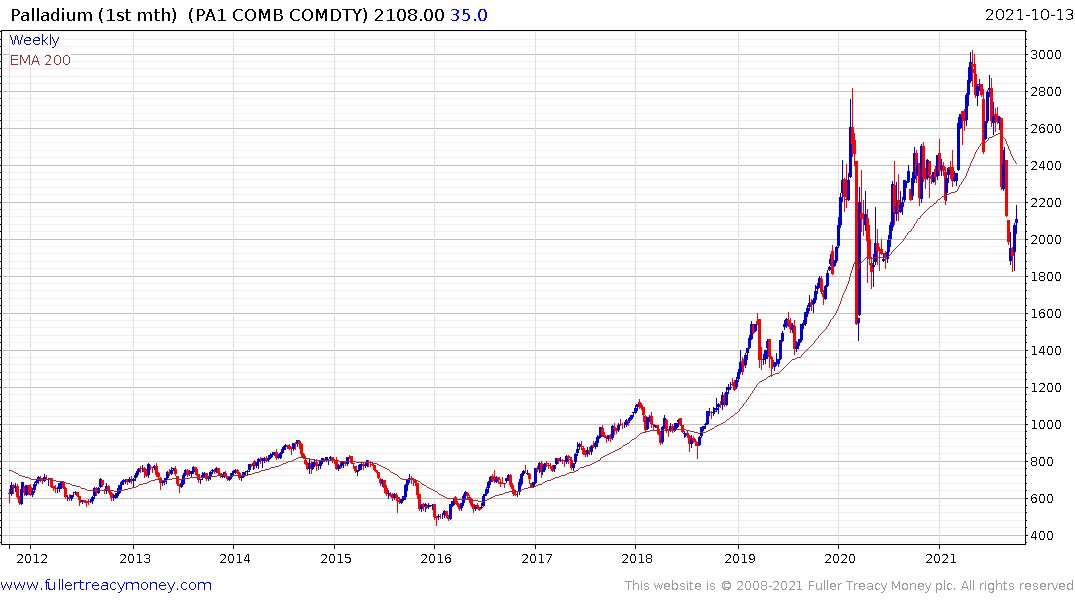 Palladium is also firming from a deep short-term oversold condition. 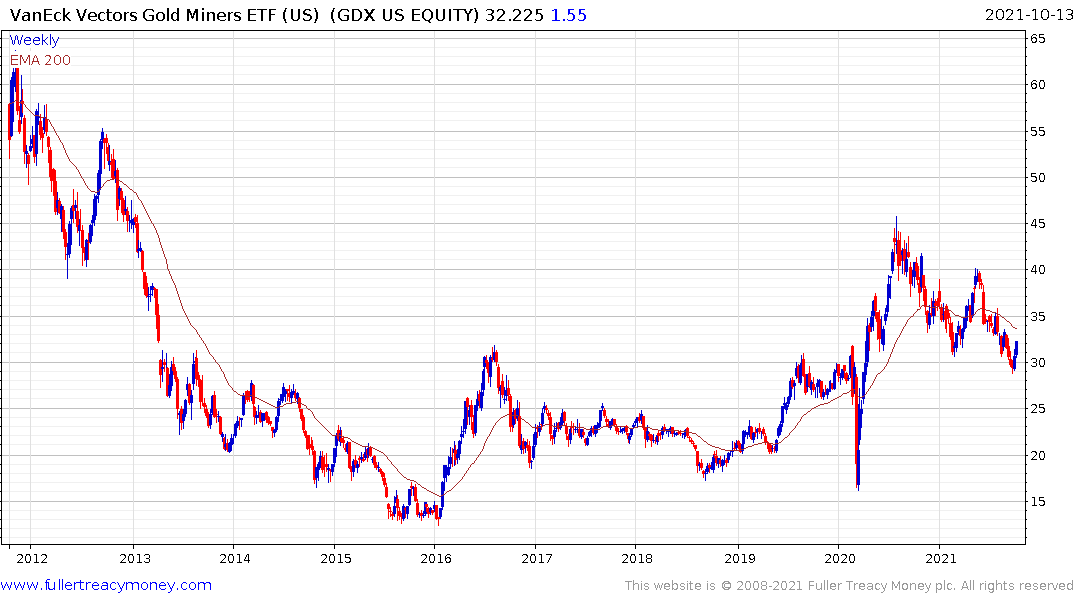 The VanEck Vectors Gold Miners ETF has also rebounded and is now trading back above the psychological $30 area as it rebounds from the lower side of the lengthy first step above its base formation.

Rising costs are a headwind for mine profitability but are much less of a concern than exploration budgets. As long as miners remain disciplined with spending plans, they are likely to be rewarded with higher valuations. 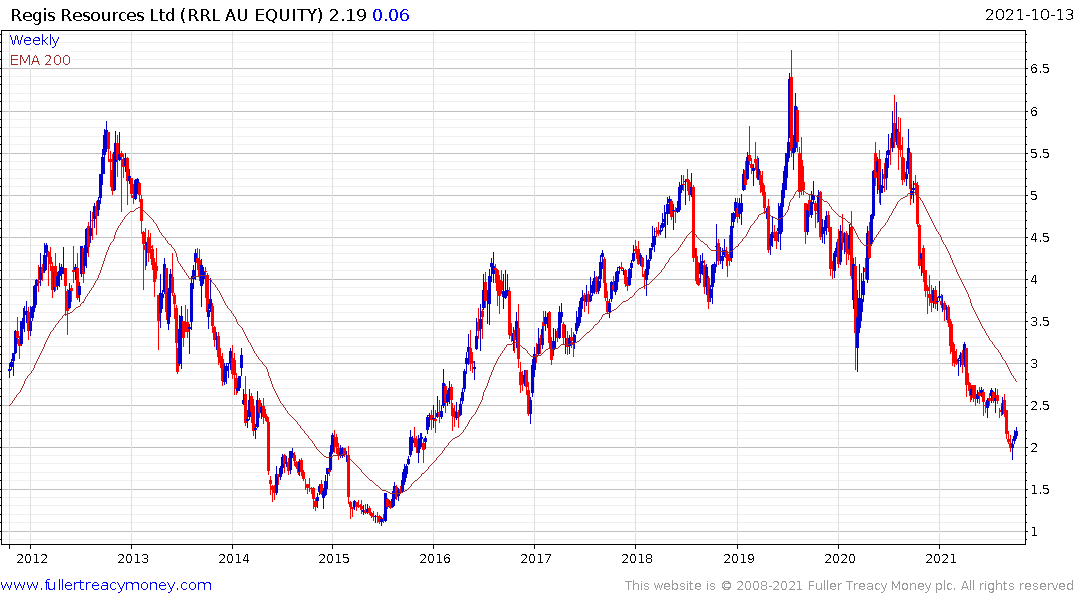 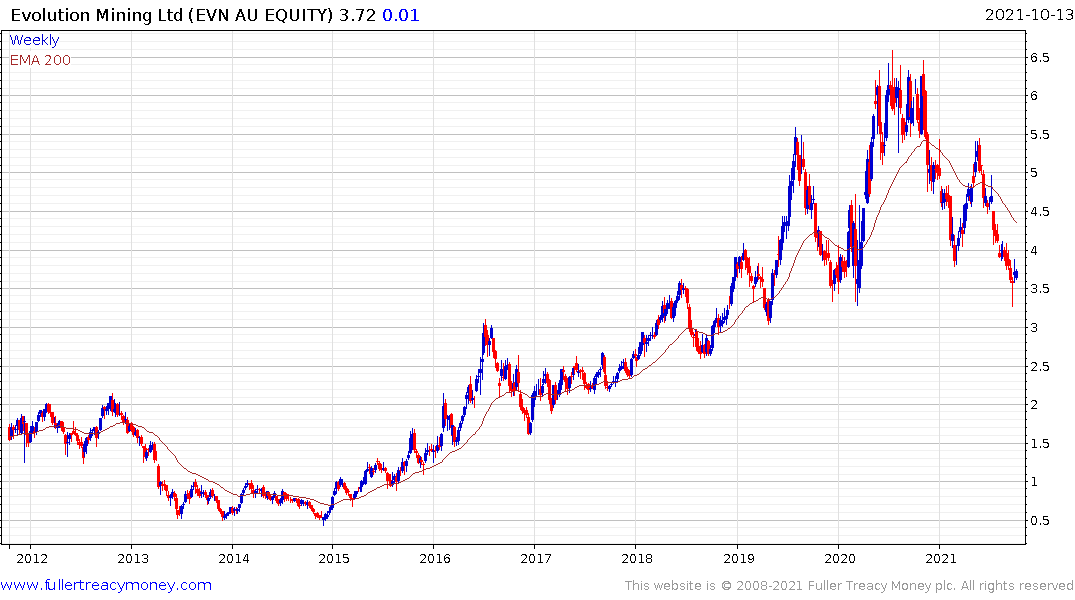 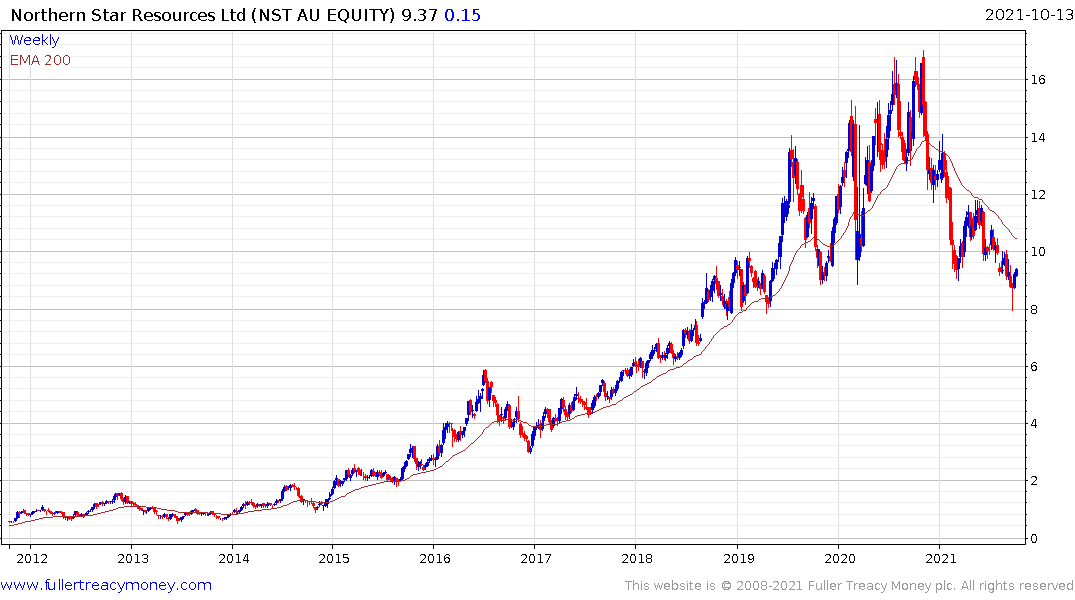 Regis Resources has fallen from A$6 to A$2 during this corrective phase. The company (Est P/E 8.3, Net DY 3.13%) now trades on a low valuation. Cutting the dividend exaggerated the decline over the last year. With an AISC (all-in sustaining costs) of $1365, it should offer leverage to a rising gold price because that would lend security to the dividend. It has a great deal of commonality with larger producers like Evolution Mining and Northern Star which have also experienced deep corrections. 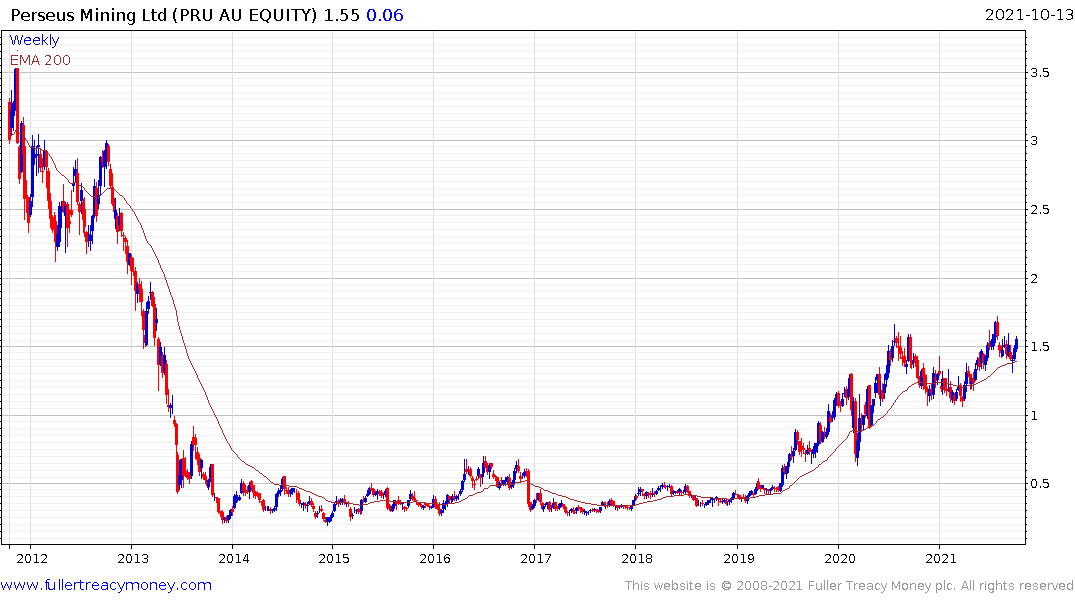 Perseus Mining is testing the upper side of its first step above the base. It has seen both production rise and cost decline over the last quarter. 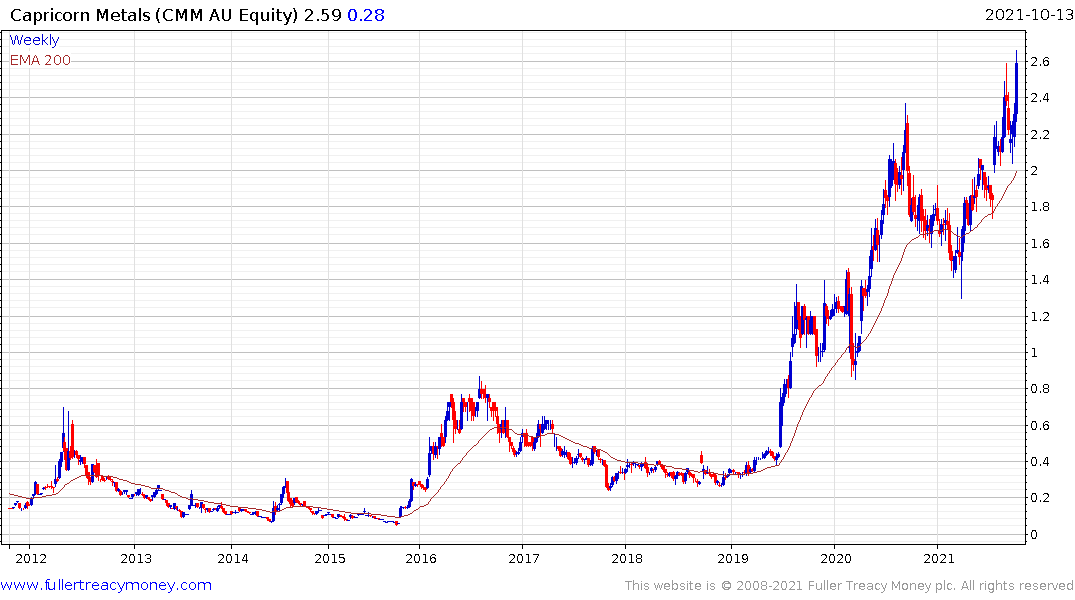 Capricorn Metals has moved from development to production over the last quarter and broke out to a new high this week. 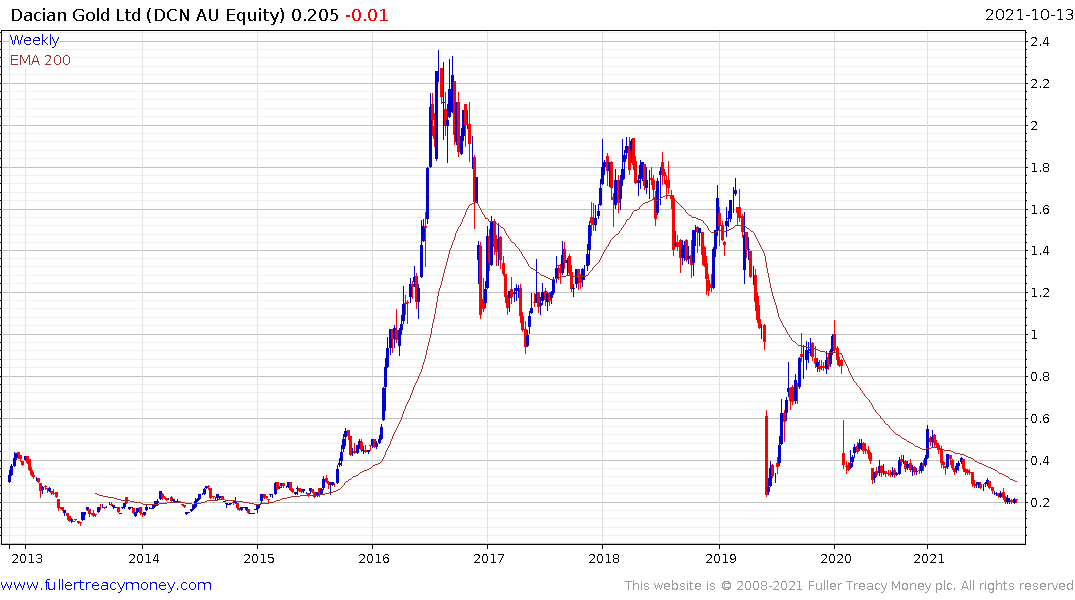 At the other end of the spectrum Dacian Gold has an AISC at the current prevailing price of gold. The share is trading at levels not seen since 2015 and has at least paused near A$0.20. If gold rallies meaningfully, these higher cost producers offer the most leverage.