Dry bulk rates have scraped along the bottom of their historical ranges for much of the past three years, but appear poised for a sustained improvement as supply growth is set to moderate further in 2014 and beyond. Global fleet growth in deadweight tons (DWT) is set to decelerate through 2016 as ship owners were not as eager to place orders for newbuildings during the challenging market of the past few years. Dry bulk demand is expected to be driven in large part by growth in iron ore and coking coal cargoes as new capacity for iron ore production is poised to come online, providing support for our estimates.

Skeptical Of Crude Tanker Rate Sustainability; Product Market Improving
While we are currently projecting limited crude tanker fleet growth (on a DWT basis) of only 1.2% y/y in 2014, followed by 0.5% y/y growth in 2015 and 2016, fleet utilization is projected to only modestly improve near-term. However, rates are up significantly in Q1 2014 due in part to weather factors which have created port delays. Compared to crude, our view of the product tanker market is relatively positive given that utilization is expected to remain north of 90% in our forecasted periods after a roughly 91.5% utilization year in 2013. Product exports out of the U.S. have benefited from a build-up of crude oil which must be refined before it is allowed to be exported due to the U.S. ban on crude exports and new refining capacity in emerging markets has created longer ton miles for petroleum products.

Here is a link to the full report quoted above.

The credit crisis squeezed just about every commodity business so that shipping companies saw demand for their services deteriorate. On the supply side, 2008 also saw a substantial increase in the size of the global fleet. The result was that the Baltic Dry Shipping Index collapsed from a high above 8000 to a 2008 low of just over 400. It has been ranging above its lows since; reflecting a relative equilibrium. The longer this situation persists the more likely dry shipping companies are to cancel expansion plans so that when demand eventually picks up, prices should sustain a rise.

Diana Shipping discontinued its dividend in 2008 and Bloomberg does not report a P/E for the company because it reported negative earnings in 2013. However, the share has been trending higher for 18 months as perceptions of future potential become more positive. It has returned to test the region of the 200-day MA over the last month and will need to find support if the medium-term uptrend is to continue to be given the benefit of the doubt. 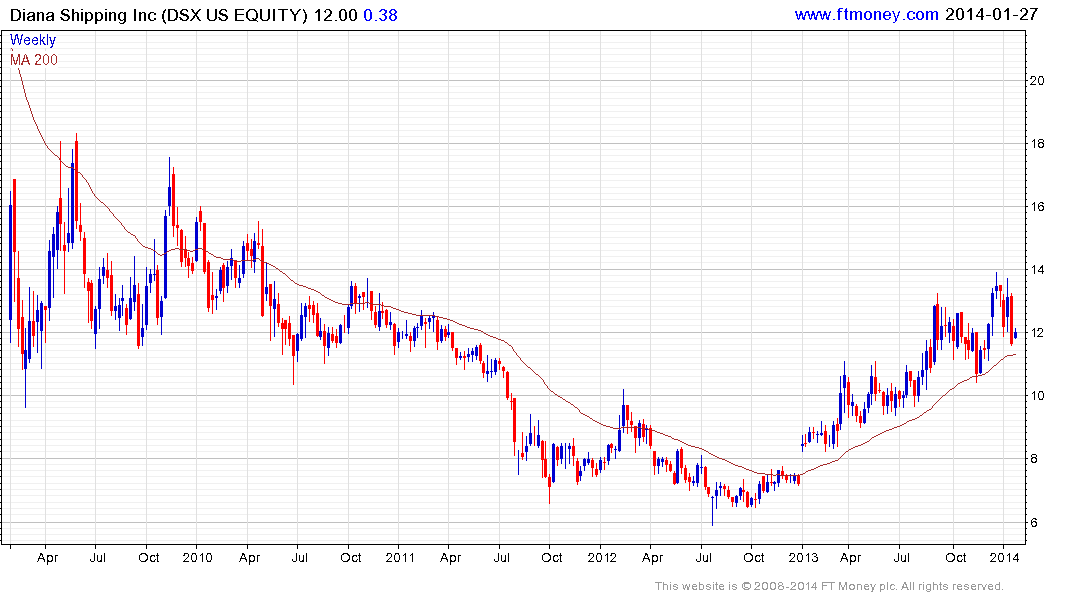 Navios Partners LP has an estimated P/E of 22.7 and yields 9.33%. The share rallied impressively from October to break the medium-term progression of lower rally highs and is currently consolidating that gain. A sustained move below the 200-day MA, currently near $16 would be required to question medium-term scope for continued upside. 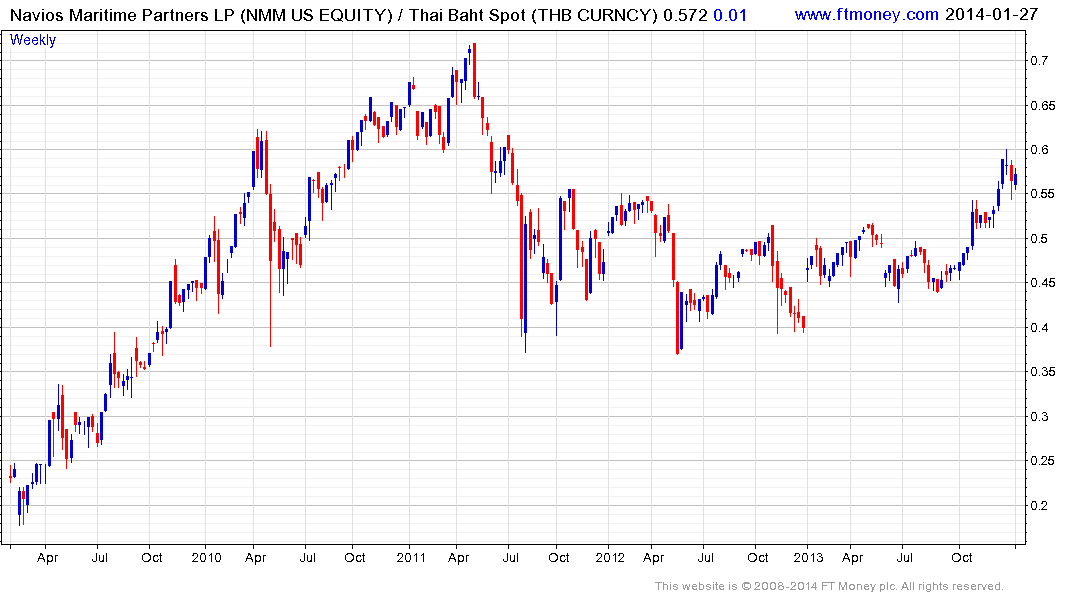