Armed with the forecasts, policy makers will debate on Wednesday the design of fresh funding operations based on their existing targeted lending program, with a focus on how long they should last and at what interest rate, the people said. The discussions will feature the sort of staff presentations that preceded previous major announcements, though that doesn’t necessarily mean all details of a decision will be available this week, they said.

The ECB’s forecasts aren’t official until President Mario Draghi unveils them after policy makers’ decision on Thursday. He and his colleagues have framed discussions on any extension of the so-called TLTRO program around having a monetary-policy case, rather than simply pandering to the needs of individual lenders.

The ECB is just the latest central bank to respond to a slowdown that’s gripped the global economy since last year. The Federal Reserve has already put its rate-hike cycle on pause, the Bank of England has cut its economic outlook, and China lowered its growth target this week.

The ECB is faced with a Eurozone economy that is impacted both by terrible domestic demographics, a high debt load, high unemployment and an export sector that is highly leveraged to the outlook for the global economy. On top of that the transition ongoing in the automotive sector represents a significant threat to one of the continent’s stalwart industries. Against the background it is hard to imagine how they can raise rates or stop trying to depress bond yields as they try to foster inflation.

Additionally, the imposition of fiscal austerity in response to the sovereign debt crisis, in an attempt to equalise debt/GDP ratios, has predictably resulted in revolutionary movements springing up all over Europe. It is therefore difficult to imagine how the Euro can rally from already weak levels. 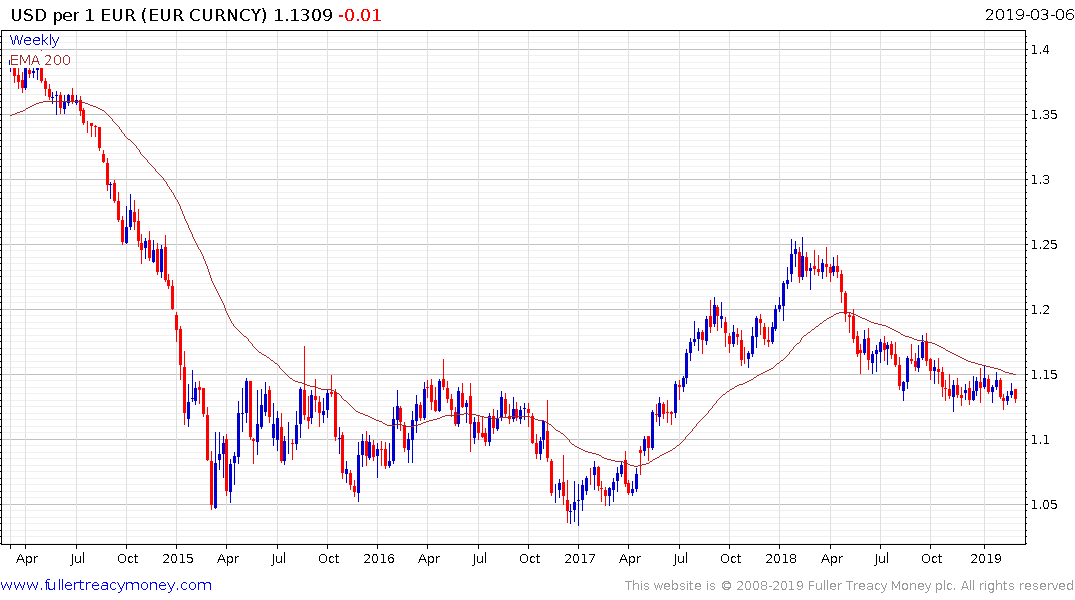 The Euro has paused at $1.16, $1.15 and is now pulling back from the $1.14 level. A sustained move above that latter level will be required to begin to question supply dominance.