Saxo Banks Fat Tail Predictions for 2014
Comment of the Day

The US information technology sector is trading about 15 percent below the current S&P 500 valuation, which is in sharp contrast to the historical premium of approximately 160 percent during the dotcom bubble. We like technology stocks in general as they are the main driver of the necessary productivity growth the economy needs to create long-term increases in wealth per capita.

However, a small group of technology stocks trade at a huge premium of about 700 percent above market valuation, almost defying the “Newtonian laws” of financial markets. These stocks are what we call the “Fat Five” of the technology sector” Amazon, Netflix, Twitter, Pandora Media and Yelp. These stocks have very inflated valuations based on a skewed valuation premium on growth that has evolved in the aftermath of the financial crisis. Investors have trouble finding good growth scenarios, so when some suddenly drop by the neighbourhood, they get bid up to levels that present very poor risk/reward ratios. It is like a new bubble within an old bubble.

Facebook’s USD 3 billion cash offer for Snapchat, declined by its 23-year-old founder, is the ultimate display of hubris that shows how exuberance has grown to new levels in this part of the technology sector. Snapchat has zero revenue and does not have a business model, so the acquisition value is not determined by incremental cash flow to Facebook, but from the potential destruction value to Facebook based on assumptions about wider adoption of Snapchat.

This creative destruction is exactly the “dark matter” that should make investors cautious about the huge valuation premium that is currently being put on this small group within the information technology sector. To trade this, we would create a synthetic equal-weighted index of the Fat Five, starting at 100 on the last trading day of 2013. Our Outrageous Prediction is that this index will go to 50 during 2014.

Here is a link to the report quoted above.

Earnings matter. Many forgot that during the Nasdaq bubble and some appear to have forgotten that simple fact again when looking for growth opportunities in the social media space. 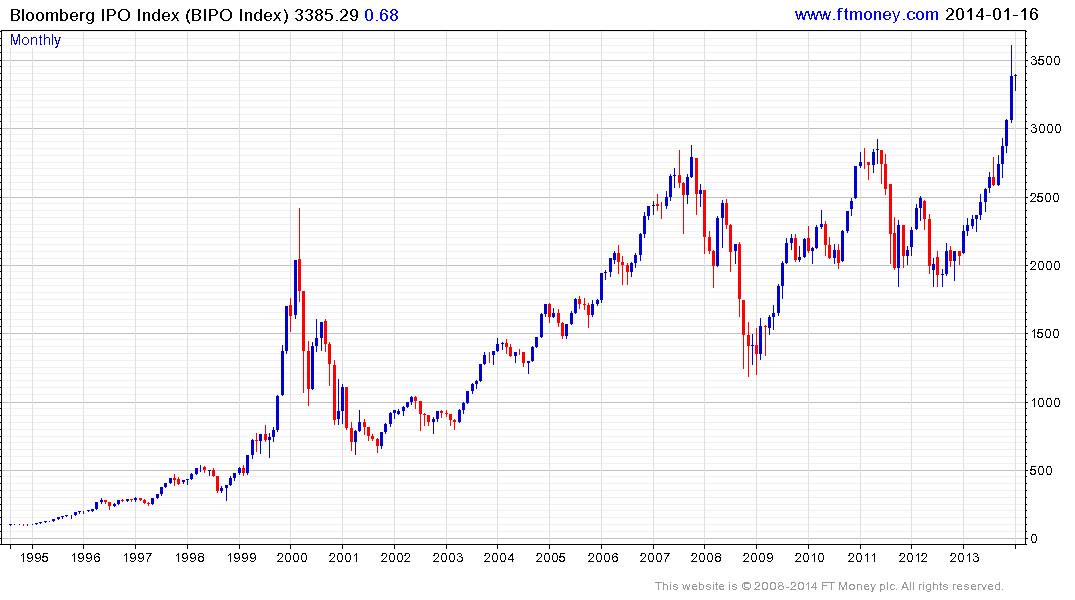 I highlighted the Bloomberg IPO Index earlier this week as a way of illustrating how strong a number of the above shares have been but also how the outperformance of new issues in the last 18 months can be viewed as a late in the cycle phenomenon and therefore a potential contrary indicator.

While large cap corporations have been busy buying back shares in order to optimise their weighted average cost of capital, the market for IPOs has been surging with some weighty companies listing in the last few months and a number of more in the pipeline. The net effect is that the supply of shares on the NYSE increased in the first half of last year despite the robust pace of buybacks.

Of course what people are buying today is probably more skewed toward momentum and performance rather than a particular focus on 2014 earnings or a perspective on the macro cycle. YELP, Pandora and Facebook all broke up out of their respective short-term ranges in the last week and are approximately 30% overextended relative to their repsective 200-day MAs. 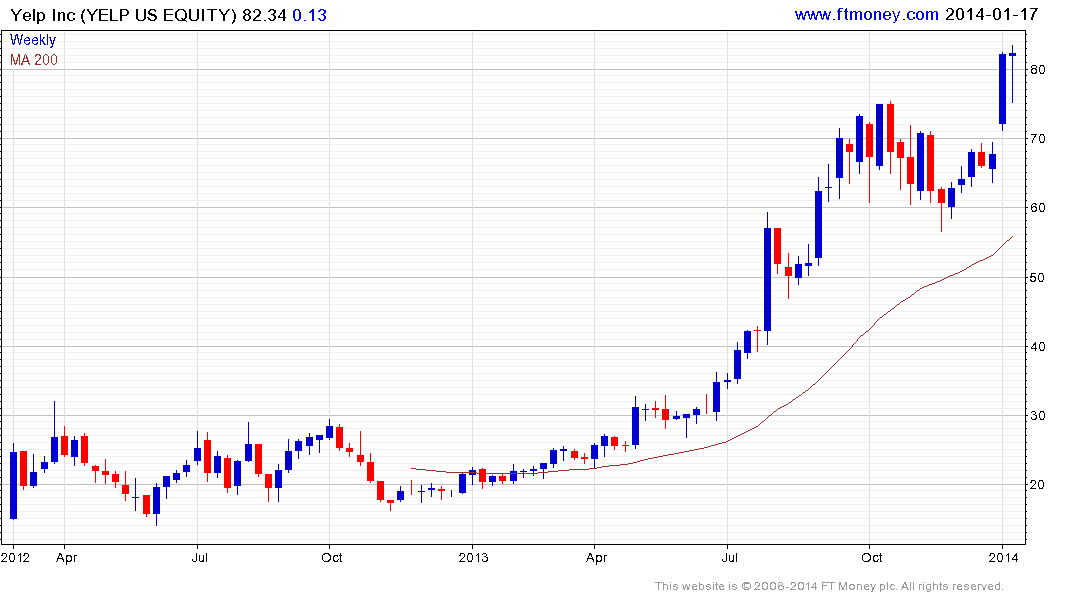 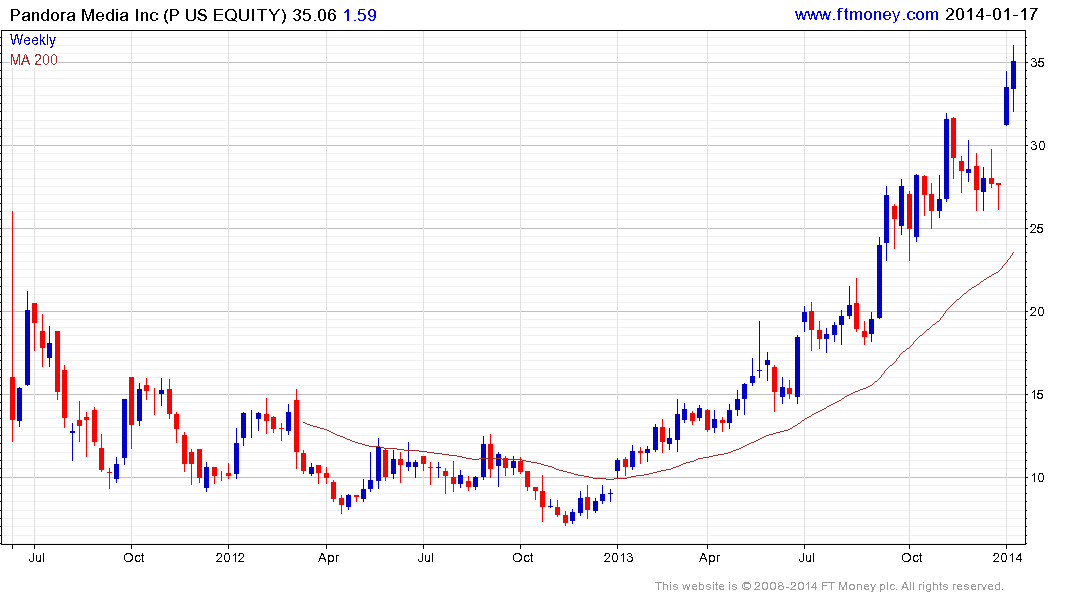 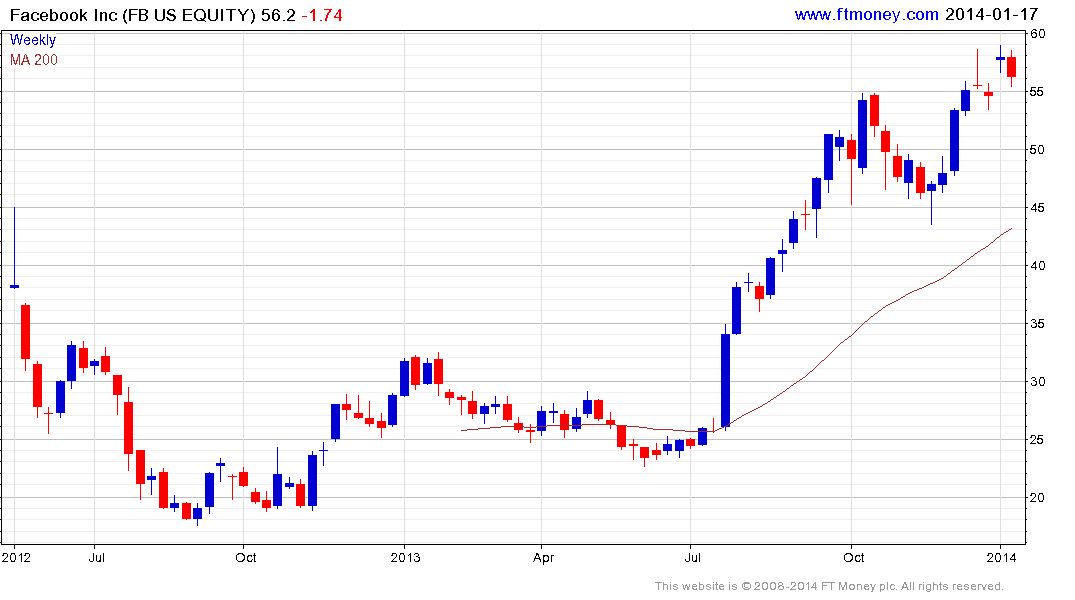 Twitter has steadied following a pullback and Amazon is approximately 20% overextended relative to its trend mean as it pauses in the region of $400. However participating at stretched multiples on the basis of performance amounts to gambling rather than investing, the success of which depends on the discipline to exit before the inevitable mean reversion takes place. 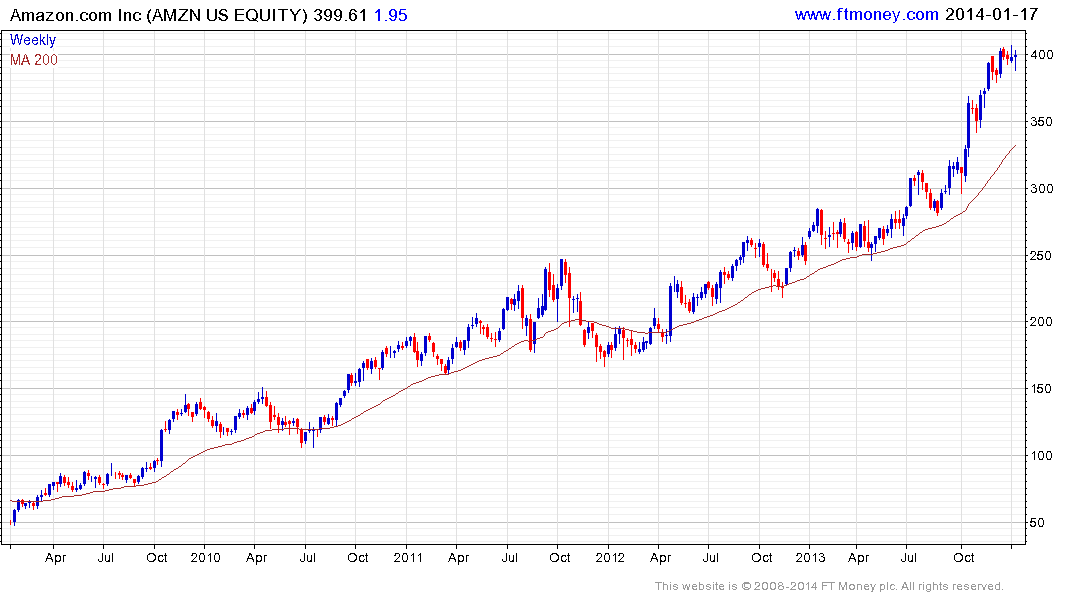 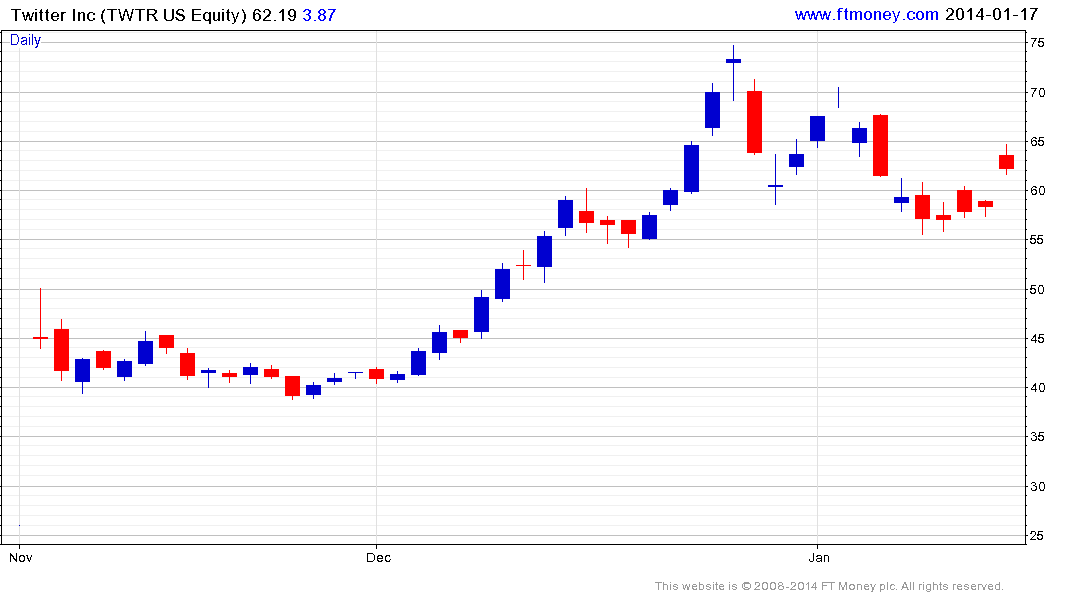 An additional consideration from the above report which admittedly concentrates on a range of quite unlikely outcomes is that China is not mentioned anywhere as a risk. In the last few years China would have been at the top of many people’s lists of “fat tail” events. It would seem to a notable omission this year. (Also see my following piece on China’s banks).