Operating income fell 60 percent to about 6.2 trillion won ($5.5 billion) in the three months ended March, according to preliminary results released Friday from the Suwon, South Korea-based company. That was the biggest decline since a similar drop in the third quarter of 2014. Analysts surveyed by Bloomberg had expected a 56 percent slump to an average of 6.93 trillion won.

Samsung issued a rare warning last month that its results would be short of estimates, reflecting slower orders from data center owners such as Amazon.com Inc. and handset makers including Apple Inc. That’s pushed down prices for both DRAM and NAND memory and compounded the struggles for the South Korean company as it counts on new devices such as the Galaxy S10 smartphone to help it fight back against increased competition.

“We do expect server DRAM demand to pick up as well as the S10 sales and foldable-phone sales to be better than expected going into the second half.” Daniel Yoo, global strategist at Kiwoom Securities, told Bloomberg TV. “Therefore the earnings pickup should lead the share price going into the future.”

Samsung Electronics trended lower for more than year from its 2017 peak but has perked up over the last three months as the potential for earning growth later in the year is priced in. The company is a bellwether for the electronics industry since it is a major supplier of chips, memory and consumer goods. It’s impressive near 200% advance from early 2016 was a clear sign of improving perception of global growth so it is continued ability to hold the region of the trend mean is an important arbiter of whether the global reflation trade can continue to animate investors’ animal spirits. 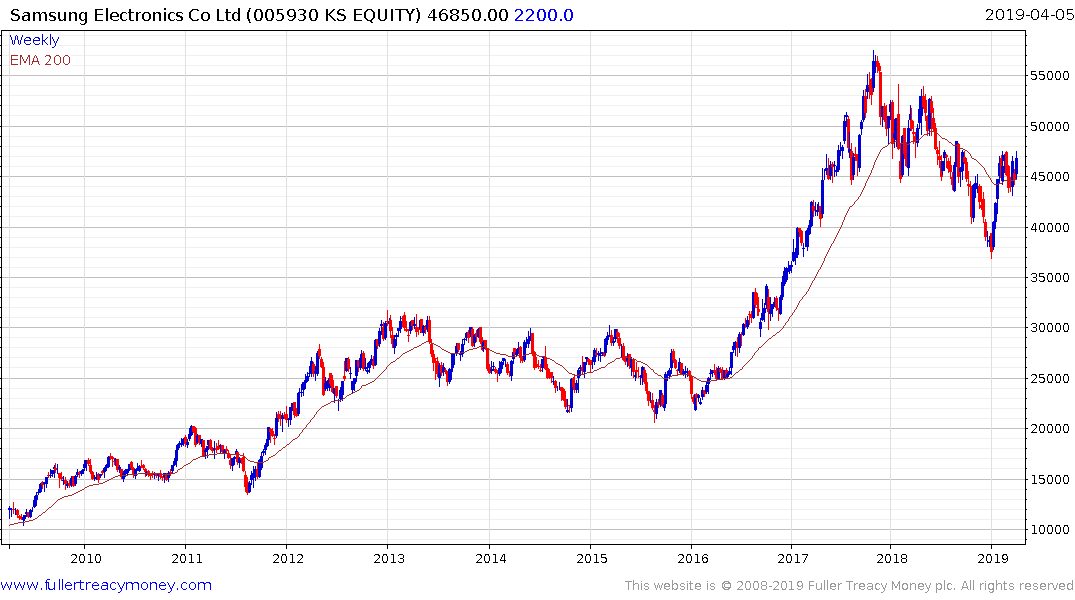 Taiwan Semiconductor has been confined to a volatile range since early 2018 and is now back testing the TWD250 area. A sustained move above that level would likely signal a return to demand dominance beyond the short term. 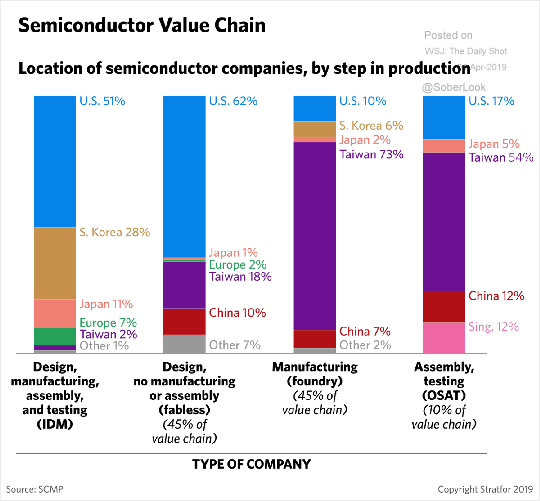 I found this graphic from Stratfor to be particularly illuminating. China has a long-held ambition to compete in chip and memory manufacturing but the vast majority of production still takes place in Taiwan. That represents one of the primary geopolitical assets in play as trade negotiations play out.

Meanwhile every constituent of the Philadelphia Semiconductors Index is in positive territory this year with the rebound in Advanced Micro Devices and Xilinx’s continued outperformance leading the way. The rally in these shares is pricing in scope for a continued reacceleration of global growth based on the assumption China is stimulating, Europe is likely to start quantitative easing again and the USA is at the top of the interest rate cycle.