The Canadian list is the only one of the Dividend Aristocrat groups that has a substantial weighting of banks and mining companies. This is a testament both to the country’s sound financial system and the size and maturity of its resources sector. The Total Return Index’s uptrend has picked up pace since October and while it is becoming increasingly overextended relative to the 200-day MA, a break in the progression of higher reaction lows would be required to signal mean reversion is underway.

List of the current and former constituents can be found in the International Equity Library.

Some of the instruments with interesting chart patterns include: 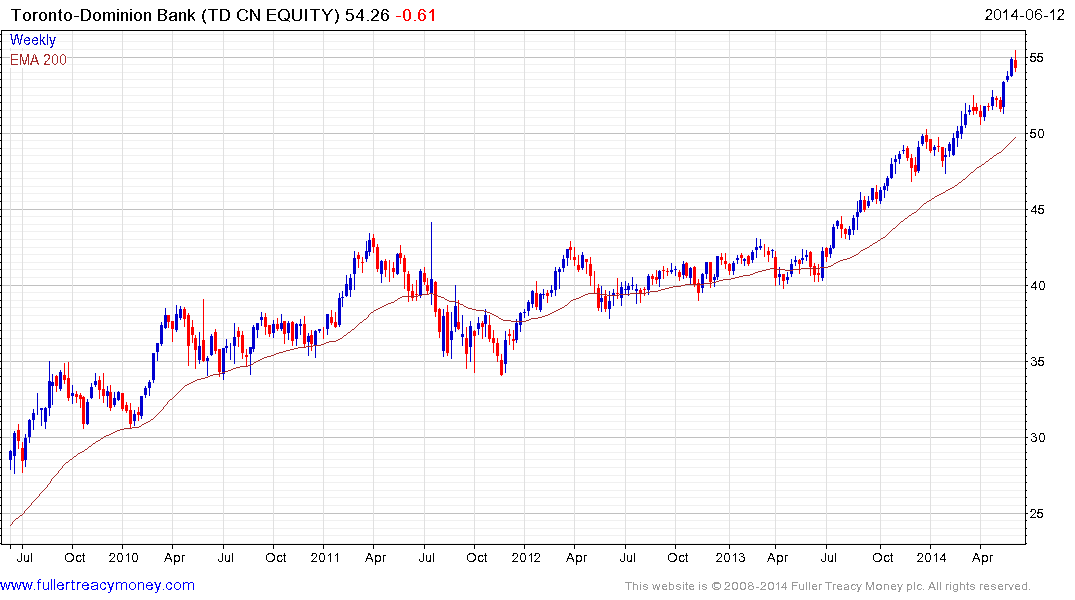 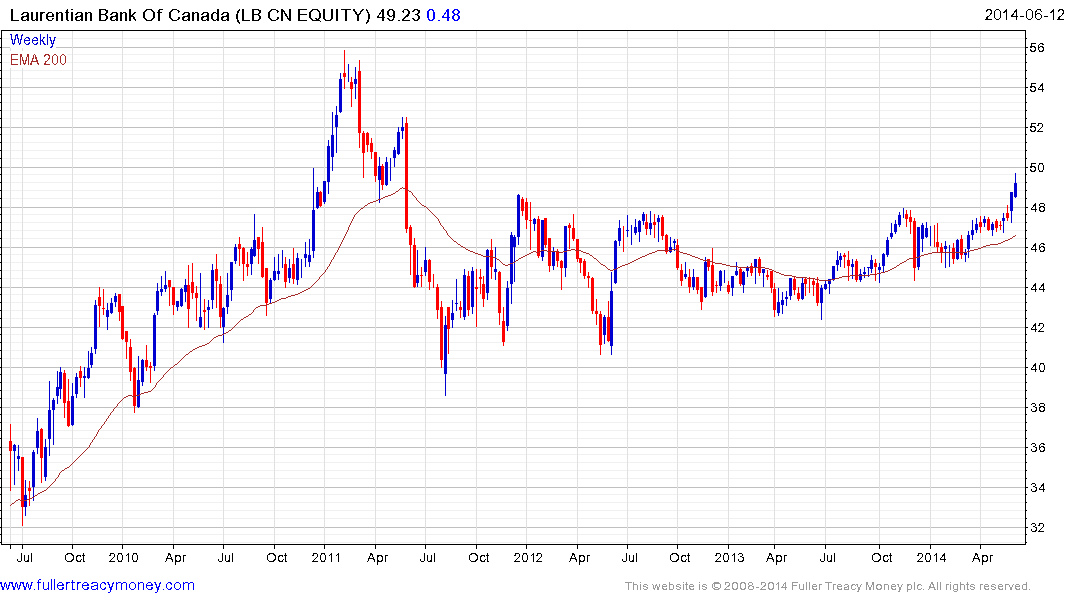 Laurentian Bank of Canada has not taken part in the impressive advances posted by Toronto Dominion Bank and the other majors but it may be starting to play catch up. The share completed a two-year consolidation this week and a sustained move below the 200-day MA would be required to question medium-term recovery potential. 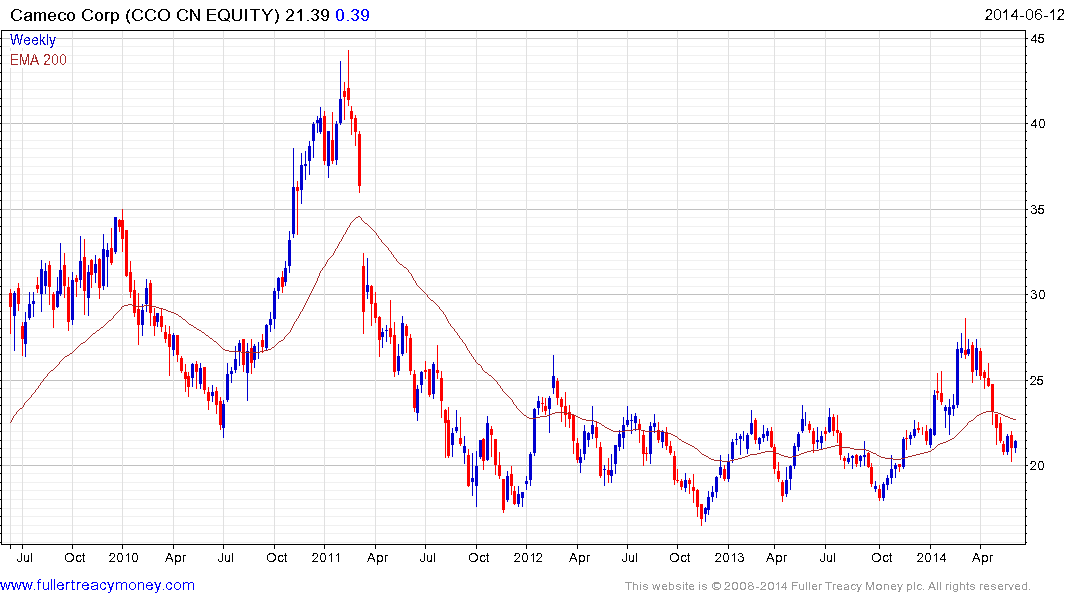 Cameco fell sharply from the March high and has found at least short-term support in the region of C$20. The uranium sector generally has been under pressure but there are  signs base formation development is underway. 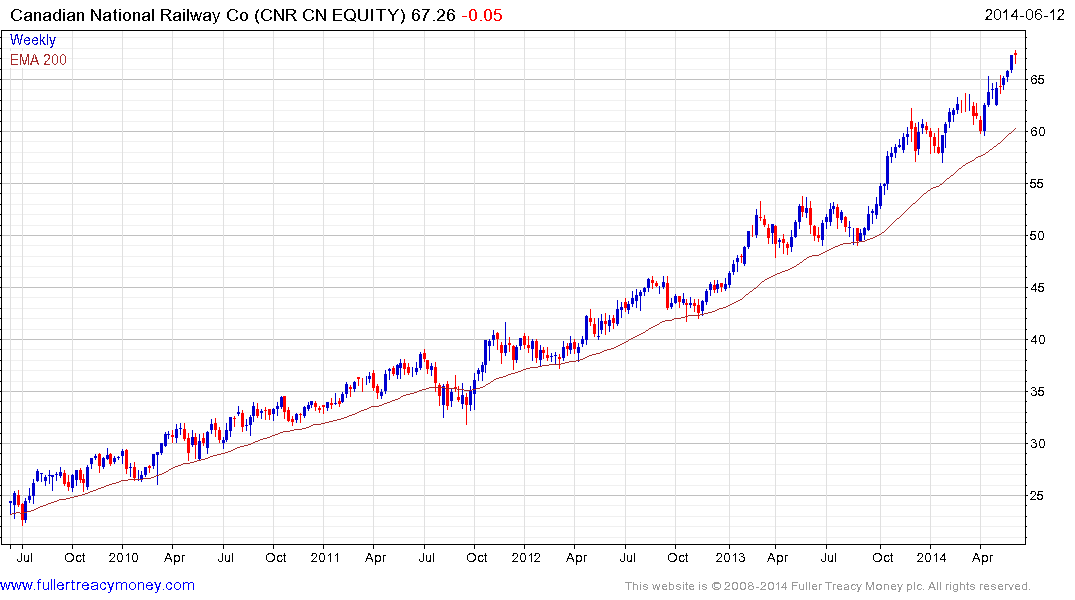 Continued US opposition to the Keystone Pipeline has left Canadian oil and gas companies with little choice than to avail of railways to transport their products. Canadian National Railway is representative and continues to hold a progression of higher reaction lows. 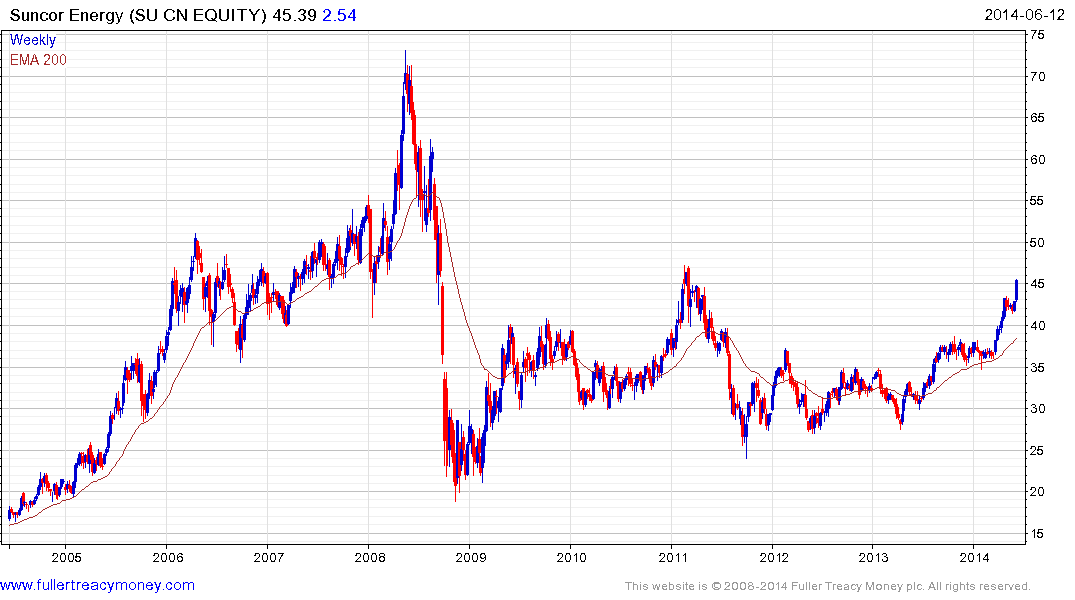 Suncor Energy completed a first step above its 18-month base in late March and continues to extend its advance. 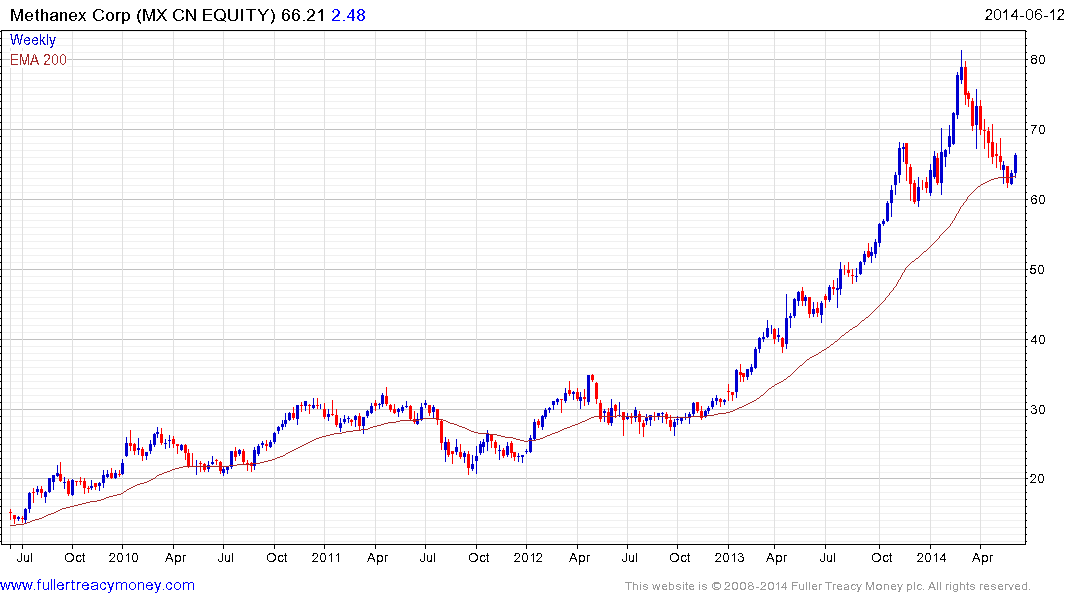 Methanex is among a number of companies which have chosen to relocate facilities from abroad to Louisiana in order to benefit from the lower cost of US natural gas. The share has unwound its overbought condition relative to the 200-day MA and found support this week. A sustained move below C$60 would be required to question the consistency of the overall uptrend. 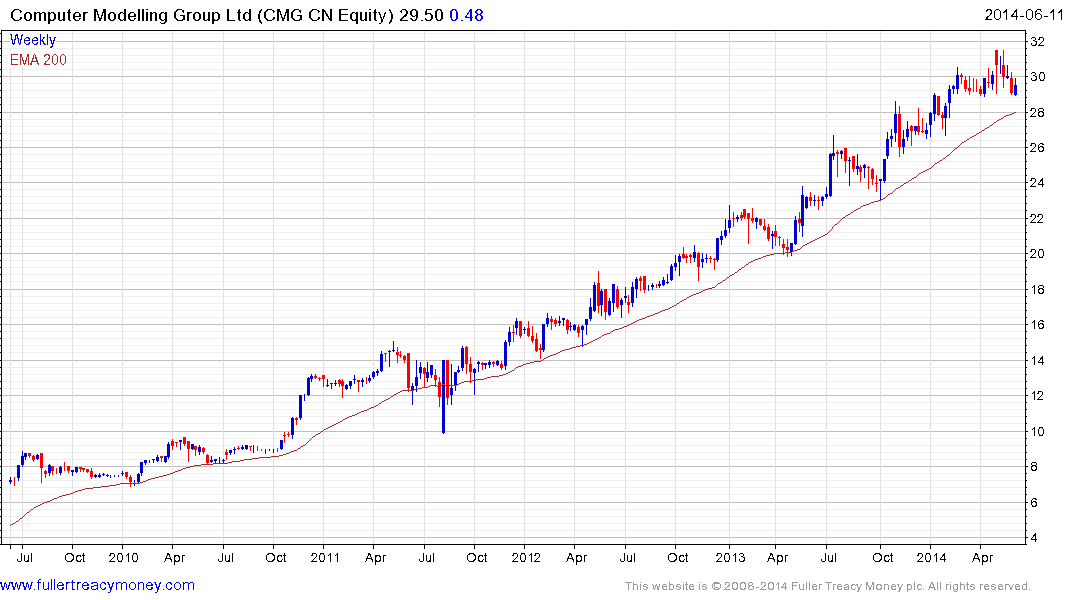 Staying with the resources services sector Computer Modelling Group Ltd produces reservoir simulation programs for the oil and gas sector. The share remains in a consistent medium-term uptrend and appears to have found at least short-term support in the region of the 200-day MA. 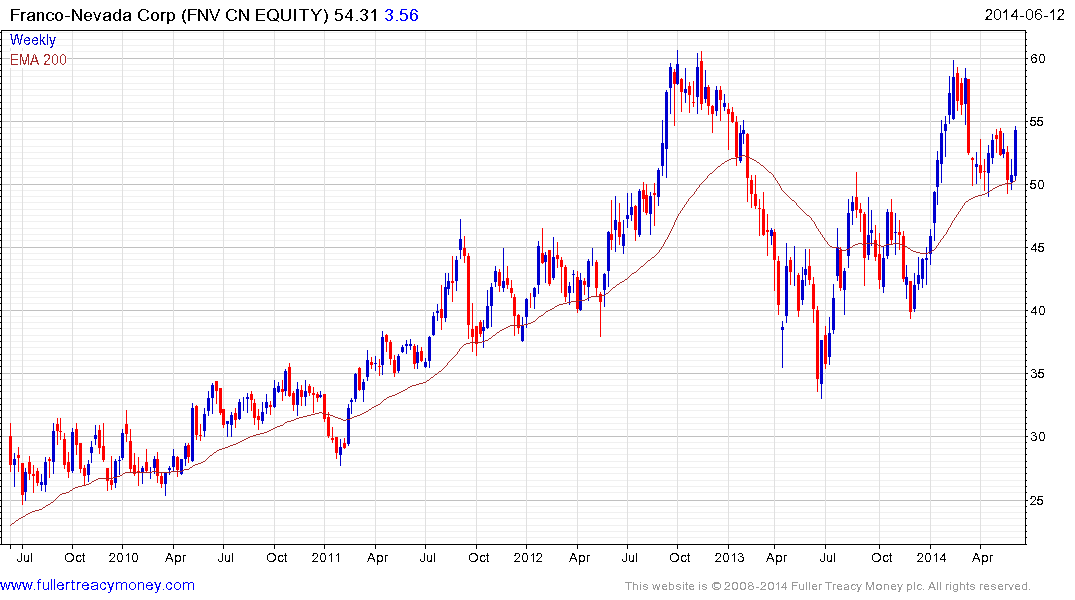 Franco Nevada found support this week in the region of the 200-day MA and a sustained move below C$50 would be required to question medium-term scope for additional upside. 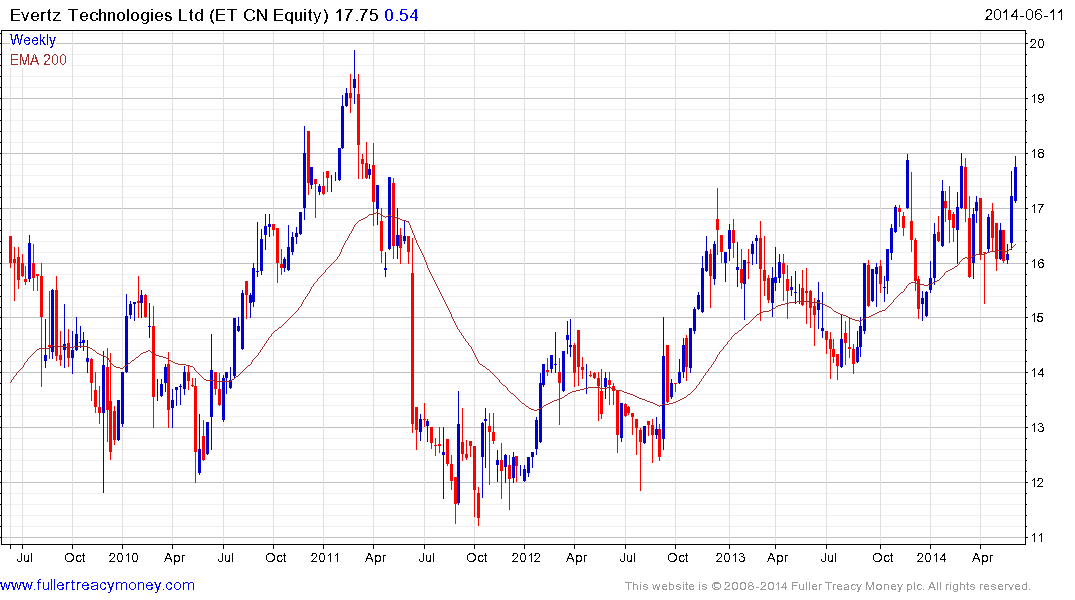 Evertz Technologies in the audio/visual sector traded above the C$18 area for the first time in more than five years this week completing a medium-term base.