As government and corporate bond yields have compressed, the relative attraction of shares where the dividend is increasing above the rate of inflation is obvious. S&P kindly make the constituents of their Dividend Aristocrats indices available through their website and they have represented a useful resource for identifying companies with solid balance sheets and respect for minority shareholder interests over the last five years.

Generally speaking the constituents of the S&P 500 Dividend Aristocrats do not have the highest yields, not least because capital appreciation tends to compress them. In order to achieve 25 consecutive years of dividend increases the companies concerned maintain conservative dividend policies where they increase their pay-out incrementally year in year out. The result is that the constituents are generally well-established companies with reliable franchises and the competitive edge within their respective niche that allows them to prosper.

Since the last time I reviewed the Index’s constituents there have been no additions or removals. This is a testament both to how difficult it is to gain admittance to the index and how desirable it is for companies to have a reputation for regular dividend increases.

A full list of the current and former constituents of the Index is now available in the International Equity Library and we are in the process of adding the European equivalent's constituents. 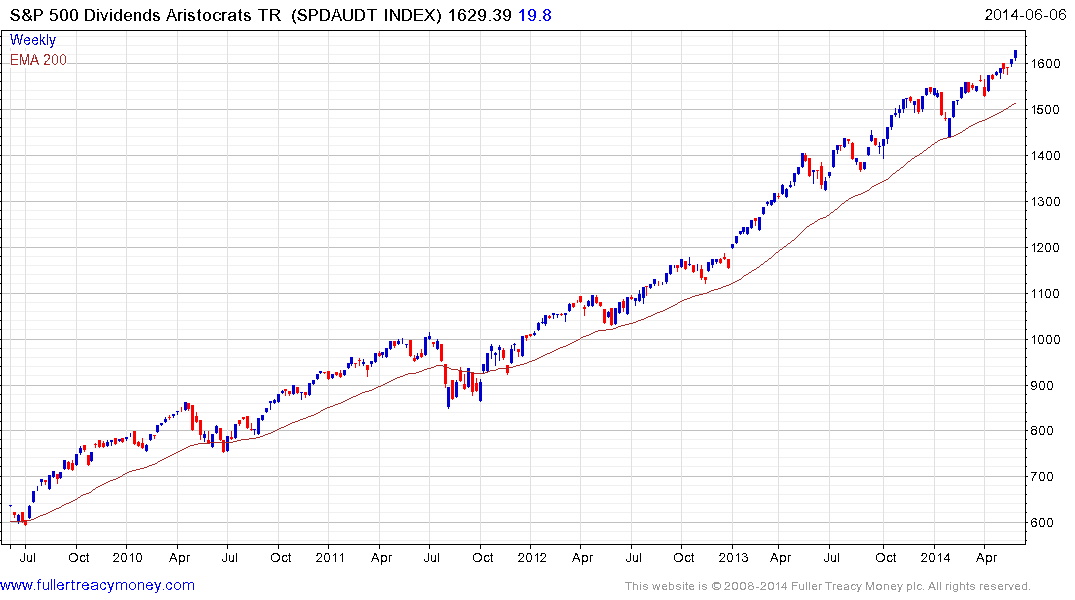 The S&P Dividend Aristocrats Total Return Index (P/E 19.51, DY 2.23%) continues to trend consistently higher and has held a progression of higher reaction lows since early 2009. It is somewhat overextended relative to the 200-day MA at present, and susceptible to mean reversion, but a sustained move below the 200-day MA, currently near 1515, would be required to question the medium-term uptrend. 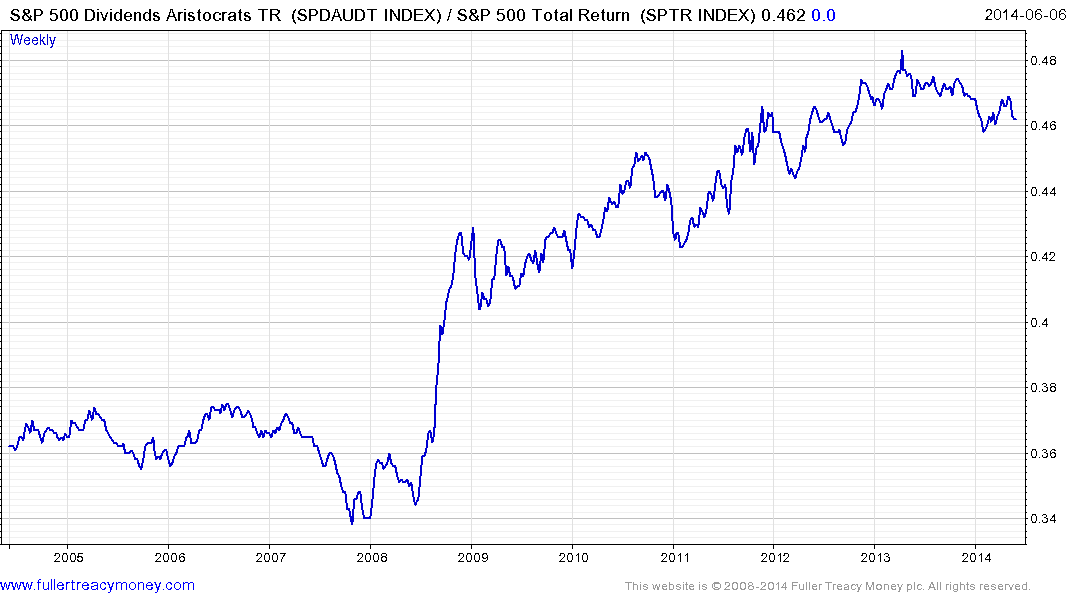 While a considerable number of constituents are hitting new highs I thought it might be more useful to point out some of those which are firming from previous areas of support or only now breaking out. 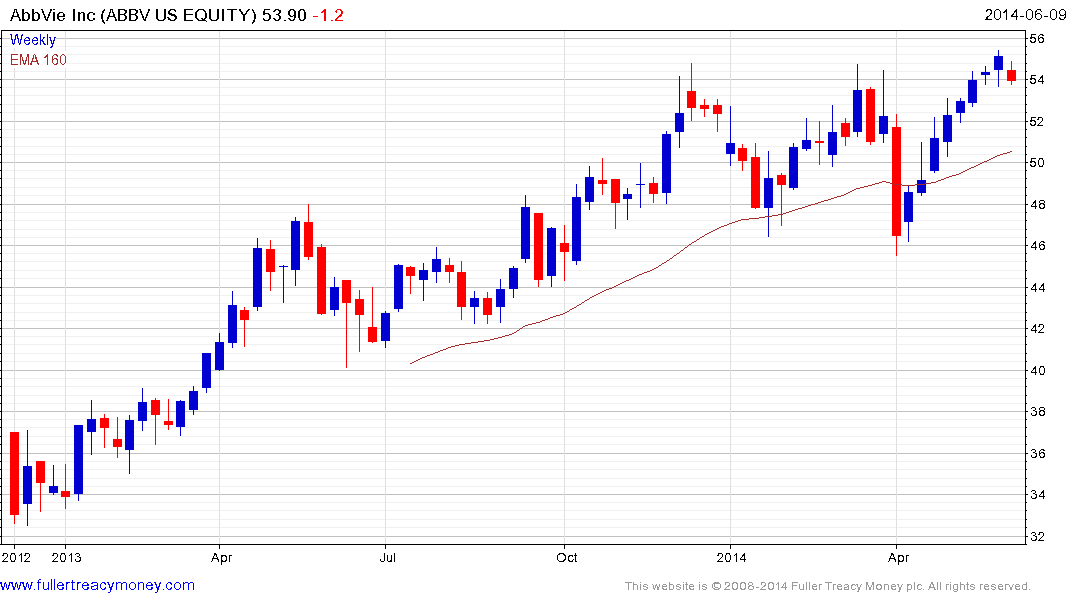 Abbvie may be breaking out of a more than six-month range. 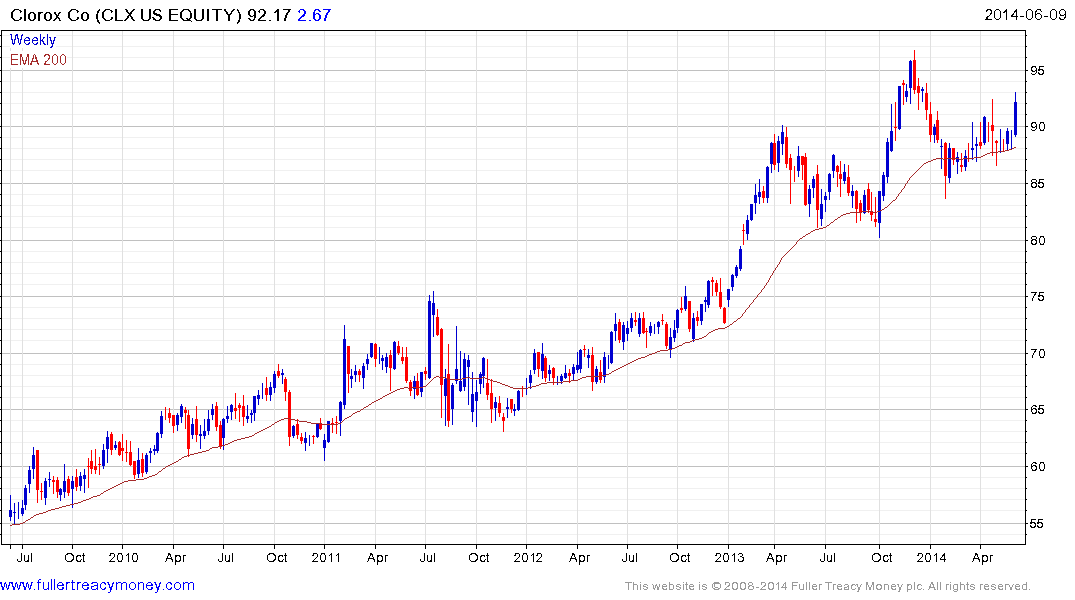 Clorox continues to find support in the region of the 200-day MA. 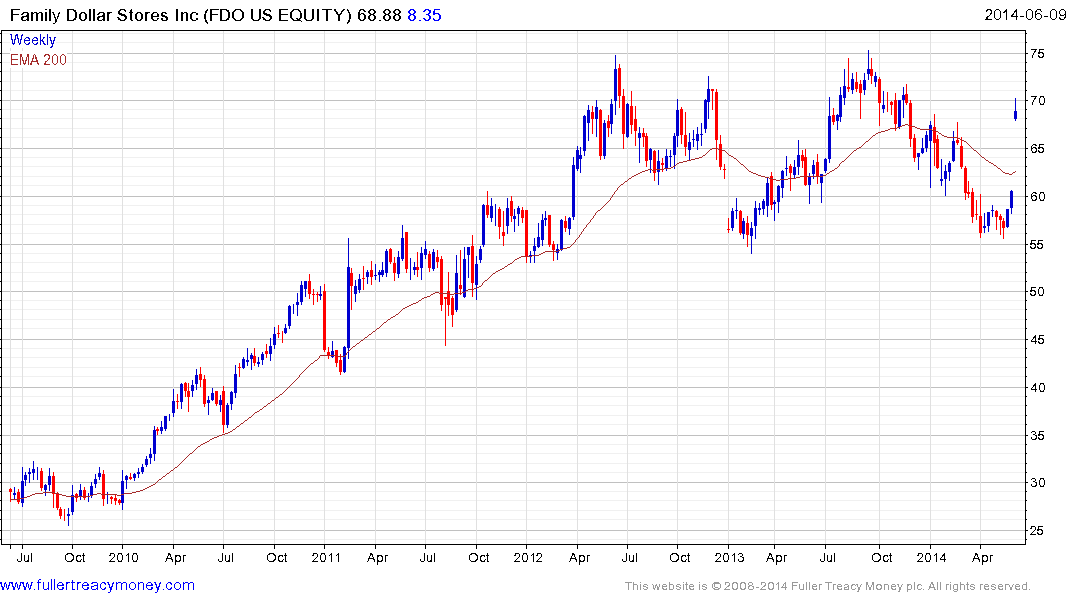 Family Dollar surged today, from the lower side of its two-year range to the upper side, on news Carl Icahn has taken a position in the company and that it has adopted a poison pill strategy to avoid him gaining control. 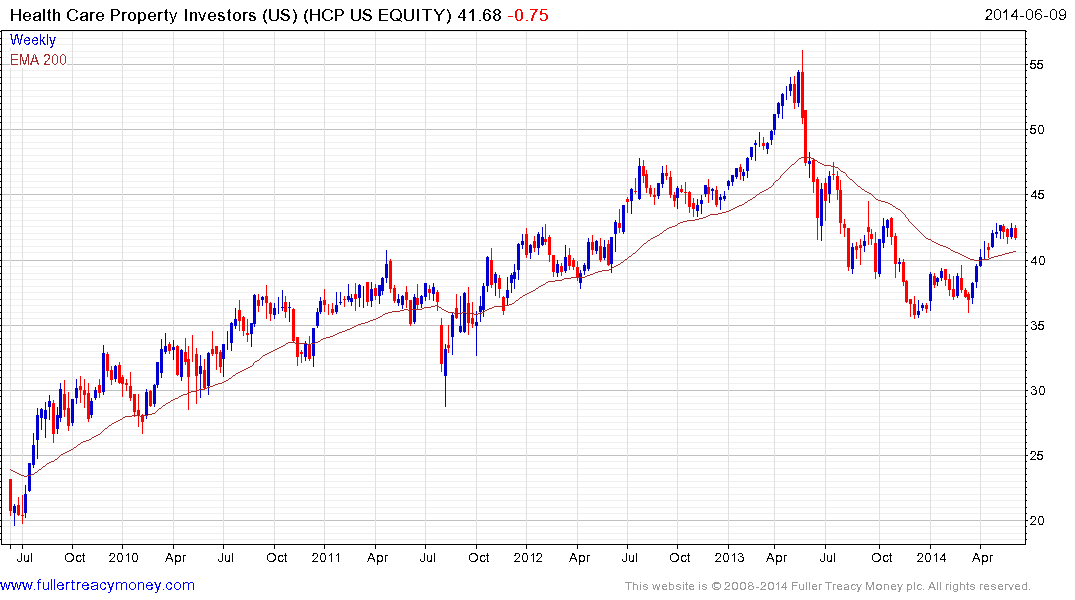 Health Care Property Investors hit a medium-term peak a year ago near $55 ahead of the introduction of the Affordable Care Act and fell to $35 before finding support. It has since rallied to break the progression of lower rally highs and a sustained move below $40 would now be required to question medium-term scope for additional upside. 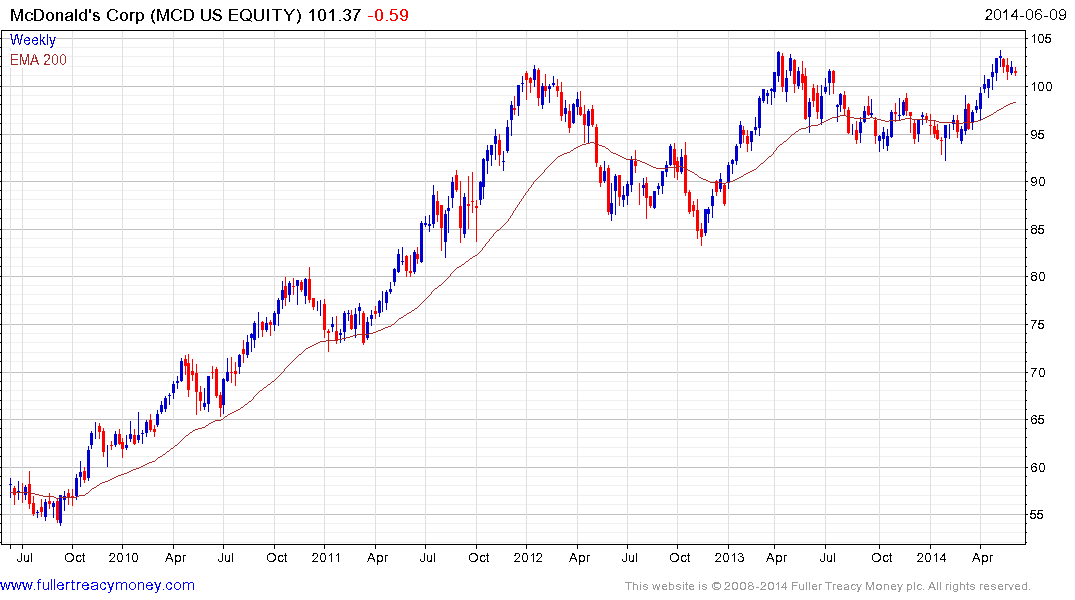 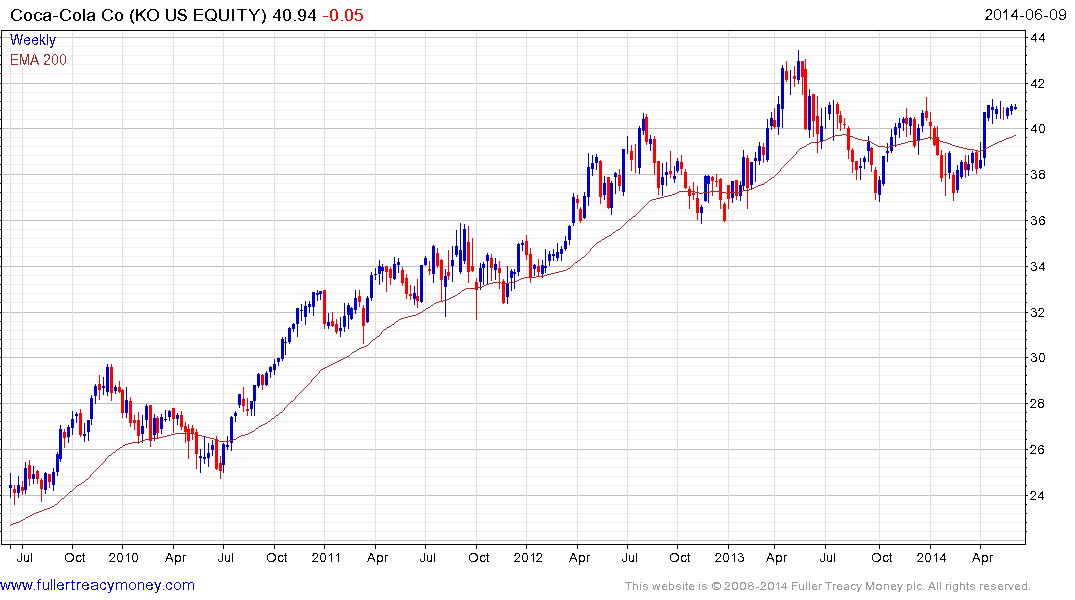 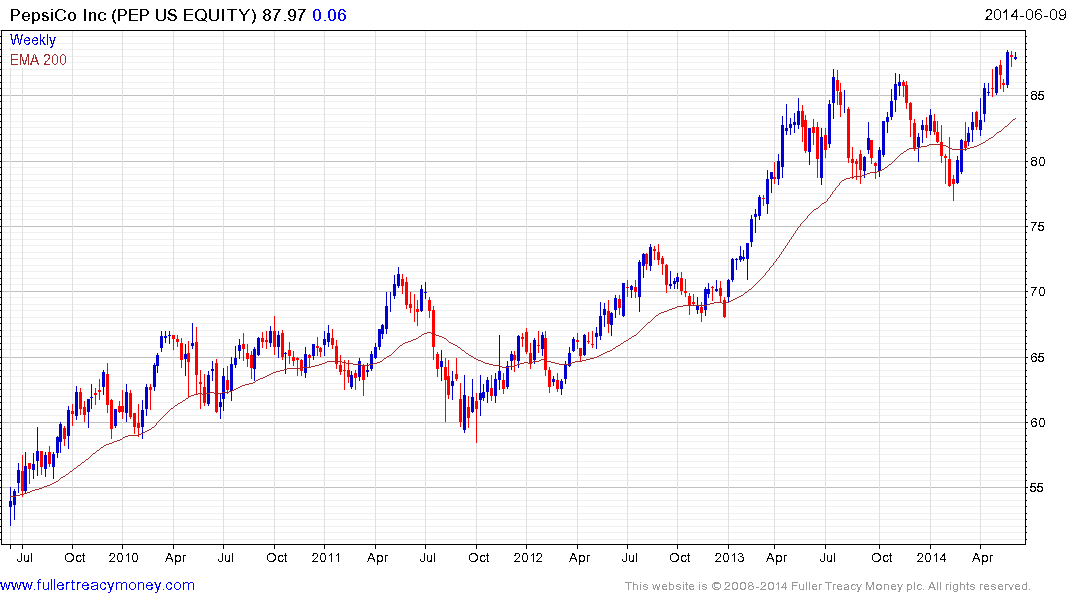 While McDonalds and Coca Cola remain in medium-term ranges, PepsiCo broke out of a yearlong consolidation in May and continues to extend the advance. 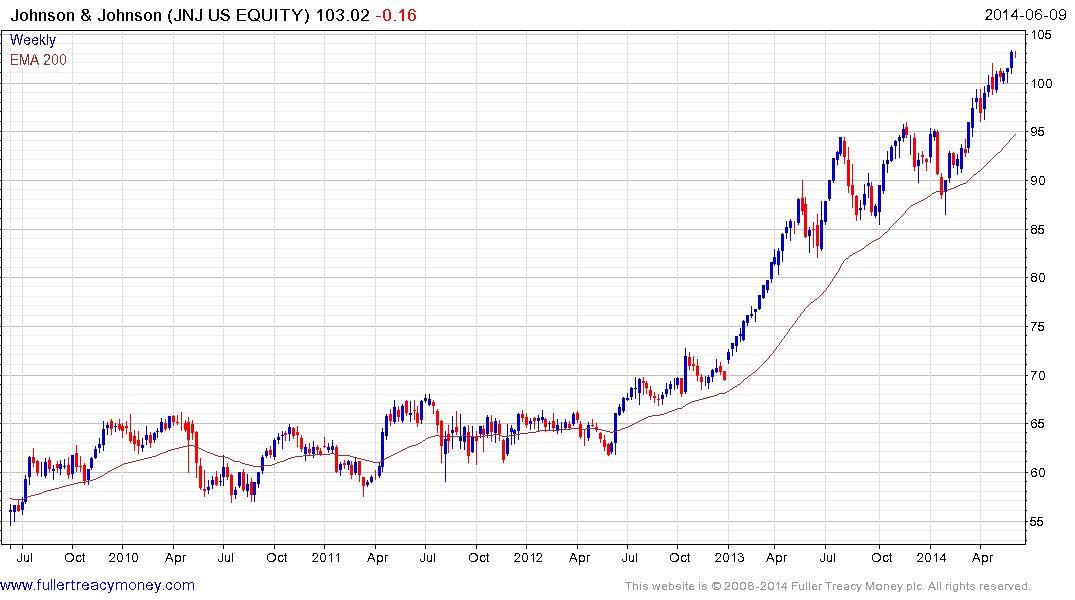 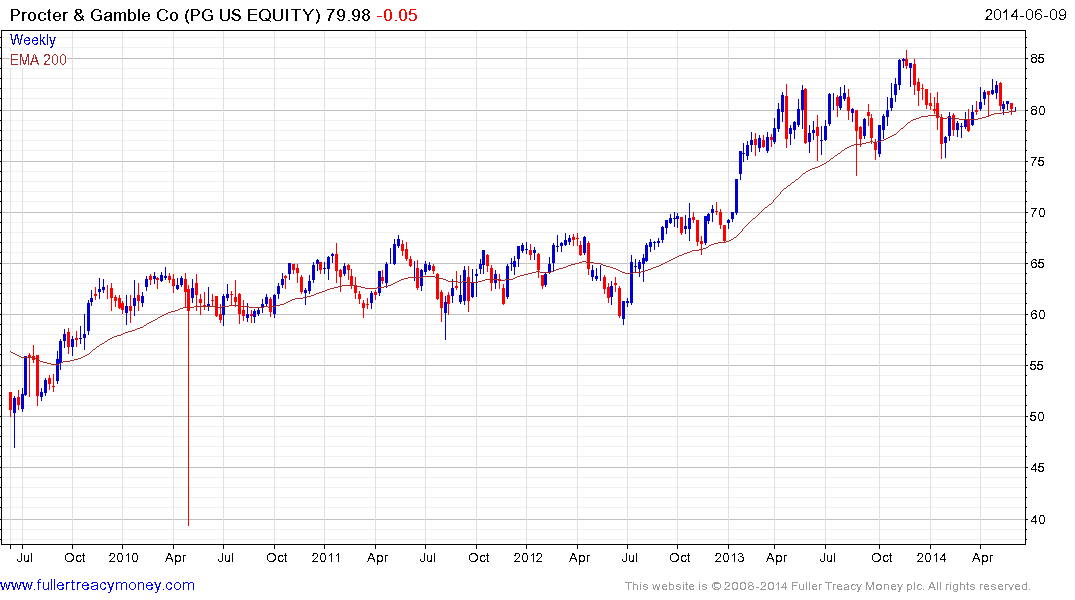 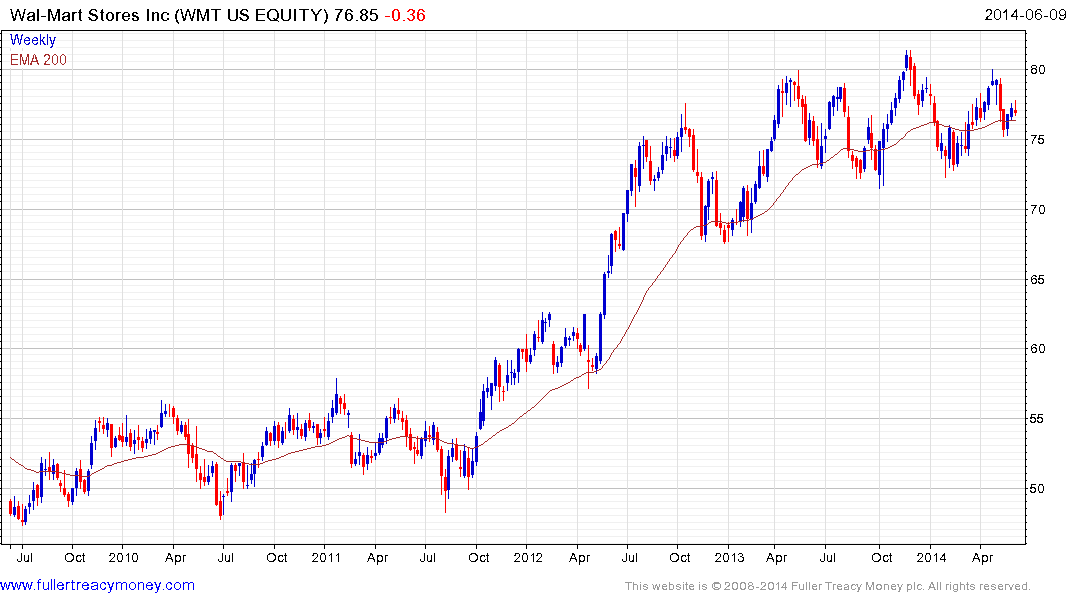 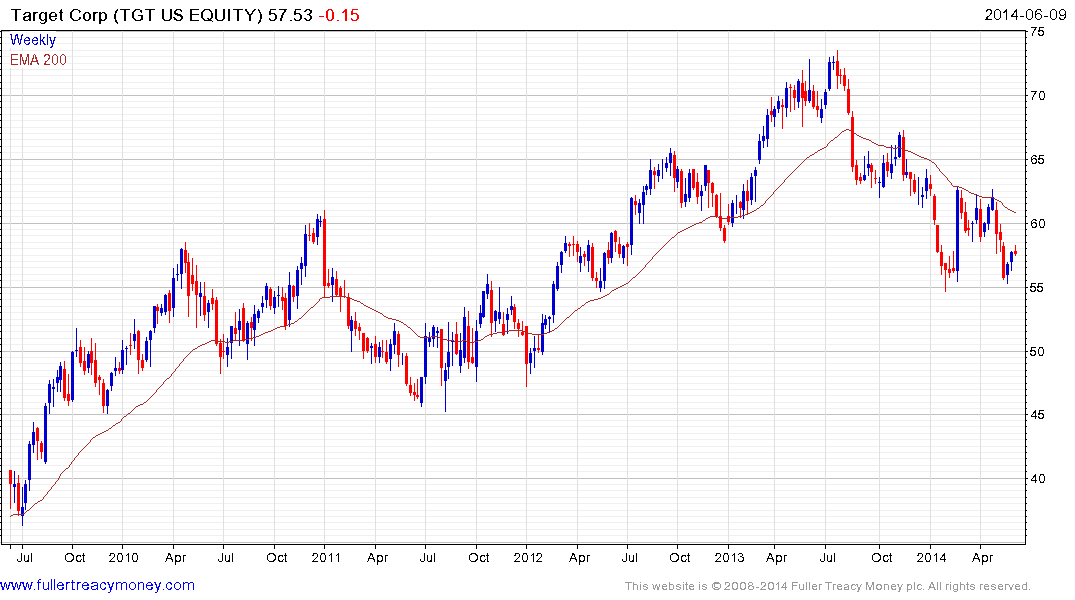 Target has returned to test its January lows and will need to sustain a move above $63 to break the progression of lower rally highs and signal a return to demand dominance beyond the short term.