Bank Rossii, which aims to let the ruble trade freely by 2015, bought the most rubles since September 2011 this week to slow the currency¡¯s drop as central banks from Turkey to South Africa raised interest rates to prop up their currencies. The Moscow-based regulator will intervene “without quantitative limitations” until the ruble returns to the target band or the corridor is lifted to its level, it said in a statement on its website, reiterating the present framework for the currency.

“It sounds like they are stepping up, even though they are not,” Vladimir Osakovskiy, the chief economist at Bank of America Corp. in Moscow, said in e-mailed comments today. Bank Rossii’s statement was “was nothing more than an explanation of existing rules, but few people seem to have actually read them,” he said.

The central bank has spent $29 billion since May 29 to smooth exchange-rate fluctuations, cutting its gold and forex reserves to $496.7 billion, the lowest level since 2011.

The extent to which this sell off leads to improvements in standards of governance aimed at correcting deficits and trade imbalances will be an important consideration in how much emerging market currencies bounce and for long how their lows hold.

For anyone who doubted how dependent economies had become on the Federal Reserve’s largesse, the sharp moves posted since the beginning of the year are evidence of significant reappraisal of potential as individual markets are now being assessed on their individual merits. 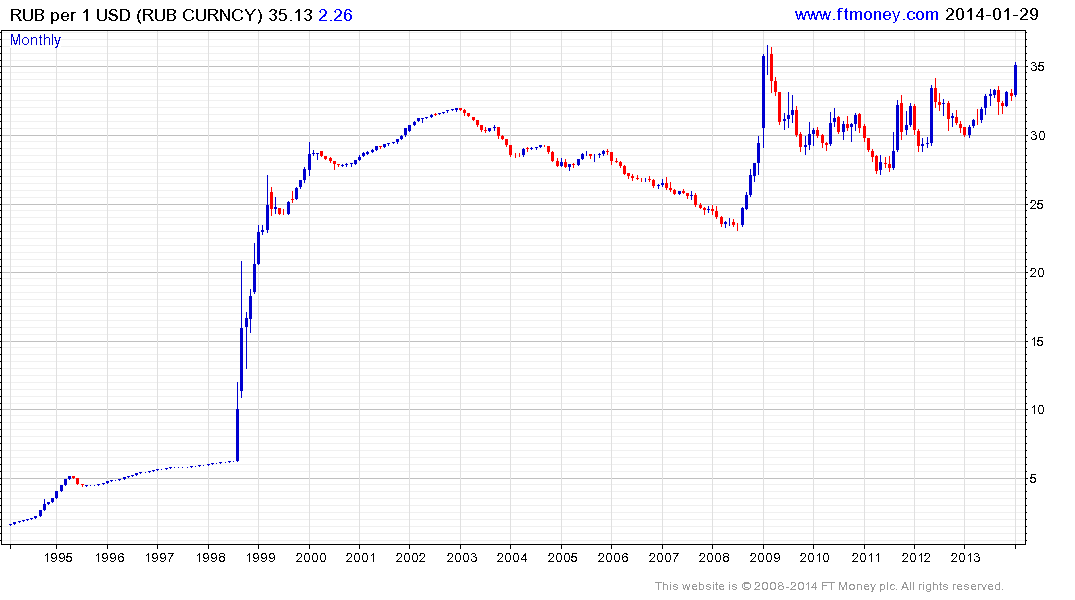 The US Dollar tested its 2009 peak near RUB36 today and at least a pause and consolidation of recent gains appears to be underway. However while there is potential for an unwind of the short-term overbought condition relative to the 200-day MA, a sustained move below the trend mean, currently near RUB32.75 would be required to begin to question medium-term scope for additional Ruble weakness.