Vanadium pentoxide (V2O5) which makes its way into so-called vanadium redox flow batteries used in energy storage systems breached $20 a pound for the first time since 2005 this month. That’s a four-fold increase from the start of 2017.

Simon Moores of Benchmark Mineral Intelligence, a battery materials research and price discovery provider based out of London, says the recent success of lithium ion batteries being deployed in increasing larger systems that are exceeding 1GWh has brought to light the huge potential of the market for all types of battery technologies.

Vanadium flow batteries have lifespans of over 20 years without capacity loss, are non-flammable and can operate at any temperature. Another advantage over lithium ion is that this type of battery can be charged and discharged simultaneously making it highly suitable for large-scale storage from renewable sources such as solar and wind when connected to an electricity grid. Main downside is low energy density which means comparatively large installations needed.

“If a vanadium battery producer steps forward with bold plans to produce vanadium flow at mass scale, giving the industry its Elon Musk or lithium ion moment, the potential for the technology to be the second most deployed ESS battery in the world is there,” says Moores.

“Raw material self-sufficiency is a critical component to this. At least a third of the cost of a vanadium flow battery is vanadium pentoxide which makes up the liquid electrolyte.

“If companies are thinking of creating the Gigafactory of vanadium flow batteries, they will either need to own a mine or implement a new pricing system where the fully recyclable vanadium in the battery is leased."

Battery technology is improving all the time and a race is on to develop models which will be the foundation of an electric vehicle. Concurrently, efforts are underway to develop batteries that can perform at scale for utilities which are increasingly reliant on renewables are inherently intermittent sources of energy. Those are two completely different growth trajectories and given the different priorities it is quite likely there will be a number of potential solutions that eventually make it to market.

Lithium prices continue to trend lower in China while Vanadium is trending higher in a dynamic manner suggesting a near-term deficit. That likely reflects the differing fundamentals of the market and the fact that a lot of new lithium supply has come to market over the last year. 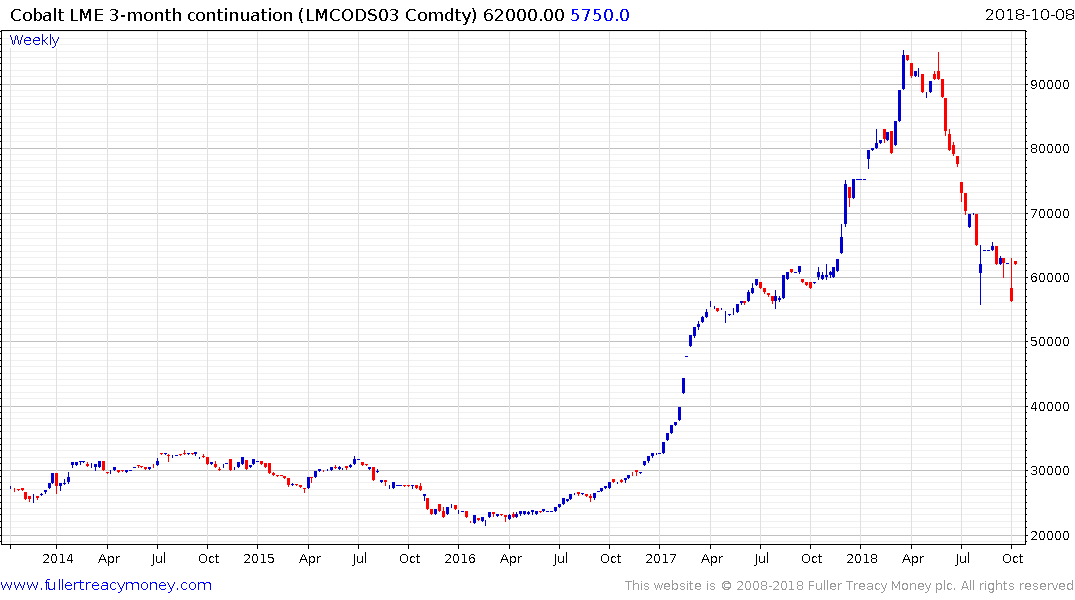 Meanwhile the pace of cobalt’s downtrend has moderated but the sequence of lower rally highs remains intact. 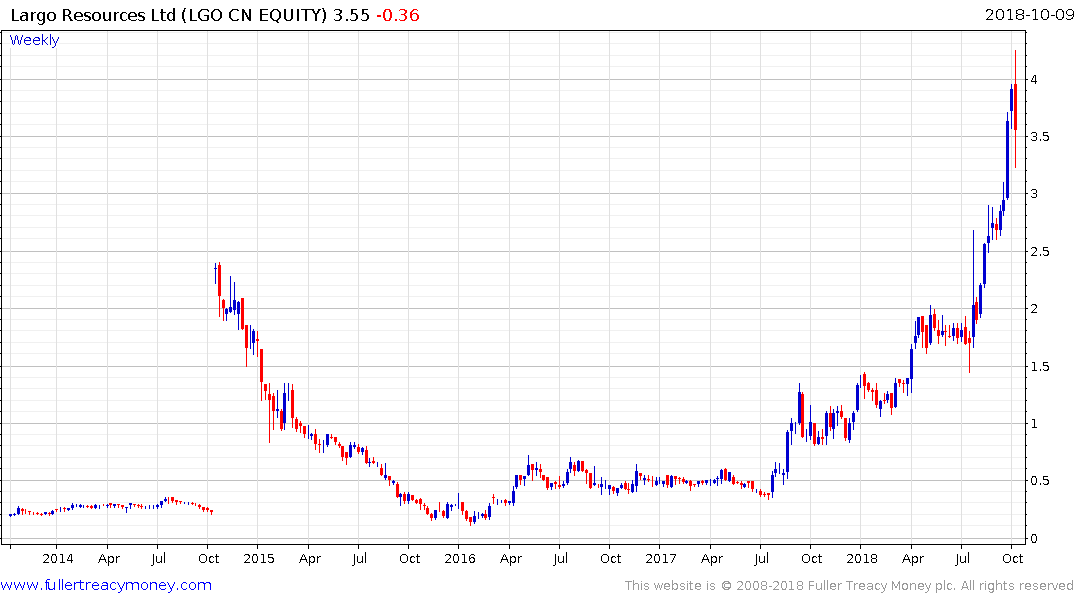 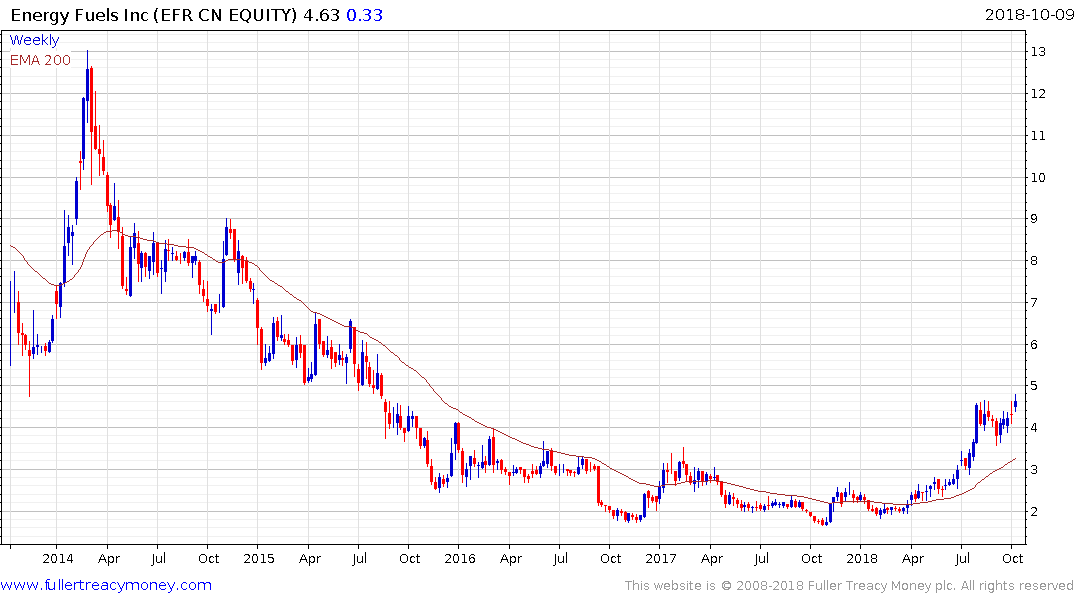 Energy Fuels Inc broke out of its base in July and is now pressuring the upper side of a first step above it. A clear downward dynamic would be required to question medium-term scope for continued upside. 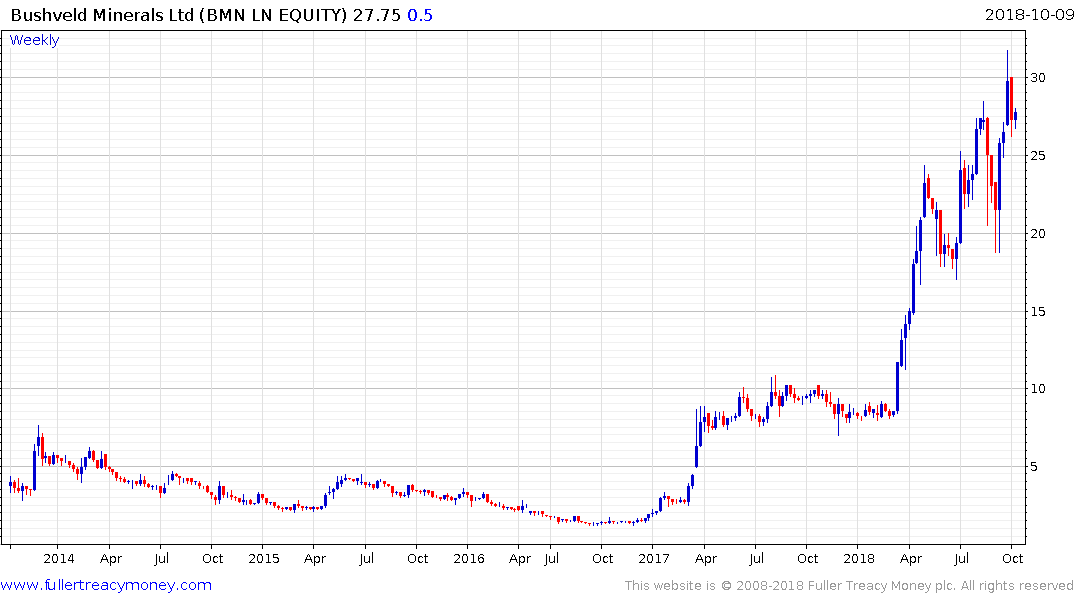 UK listed Bushveld Minerals bounced from the region of the trend mean in September and continues to hold an upward bias.