Review of the Autonomies by Eoin Treacy

This week I have spent each day reviewing a different Dividend Aristocrats index, as defined by S&P, and adding the respective constituents and former constituents to the Dividend  Today I will focus on the Autonomies, a term we coinded a number of years ago, which is a list I compiled to reflect the types of companies that should benefit from the confluence of themes represented by the Greatest Urbanisation in History, the Golden Age of Technological Innovation and the game changing nature of innovation in energy production

Our original aim in creating the list was to recognise the fact that companies have grown so much in terms of influence and dominance of their respective niches that they are now akin to mobile principalities.  The globalisation of economies means that corporations can make the best use of their platforms to optimise sourcing of raw materials, manufacturing, R&D, marketing and sales. They also have the ability to choose where they eventually pay taxes and how to limit their exposure to regulation.

Capitalism trends towards concentration as the strongest eventually consume the weakest. It is therefore no surprise that the Autonomies include a range of sectors dominated by oligarchies whether iron-ore, industrial gases, social media, marketing, convenience foods, snack foods etc.

In an exchange between Iain Little, Pascal Morin and I this week Pascal suggested the following as a definition for autonomies:

An autonomy is a company which displays leadership characteristics in its sector and operates on a global scale; it is relatively “autonomous” from any given country, including where its head office is located, with respect to tax, governmental interference, regulation, labour inputs and end-markets, and can freely choose where to allocate its resources to best fulfil its objectives.

This encapsulates the most important factors we seek to highlight with the list. In this regard it is a somewhat qualitative definition and differs from the Dividend Aristocrats which is a purely quantitative designation. I devoted the final section of my book, Crowd Money, to the Autonomies because they represent a fertile pool from which uptrends continue to evolve.

Rotation between sectors within the Autonomies has been evident for at least the last three years. Here are some of the more interesting charts: 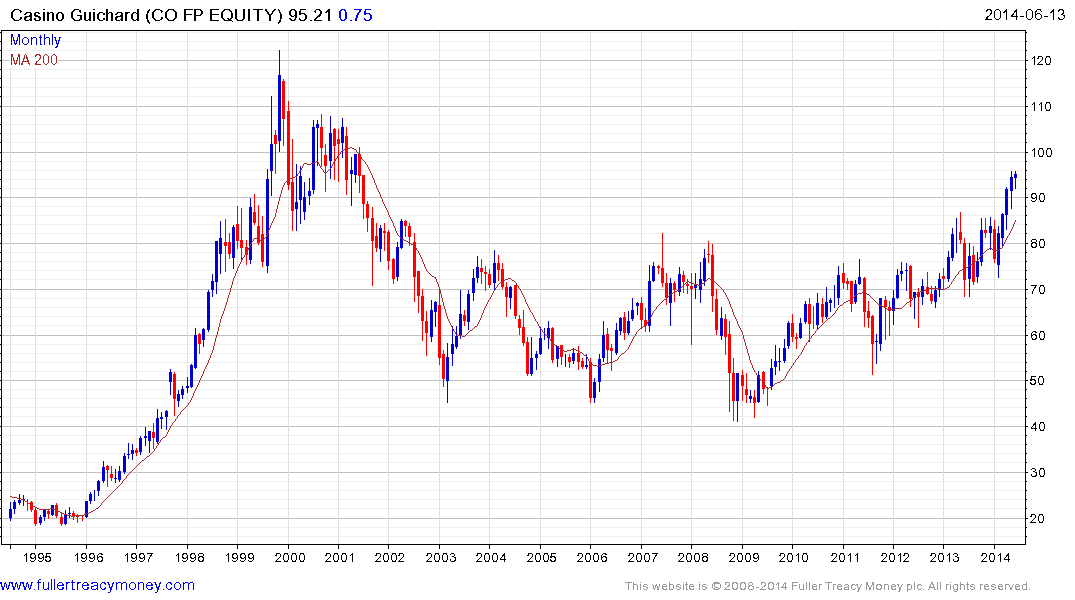 Casino Guichard revenues went from a 70/30 split between France and the rest of the world five years ago to more like 40/60 today, with Latin America accounting for the majority of growth. Over the same time total revenues almost doubled. The share completed a decade long base earlier this year and continues to extend its breakout. 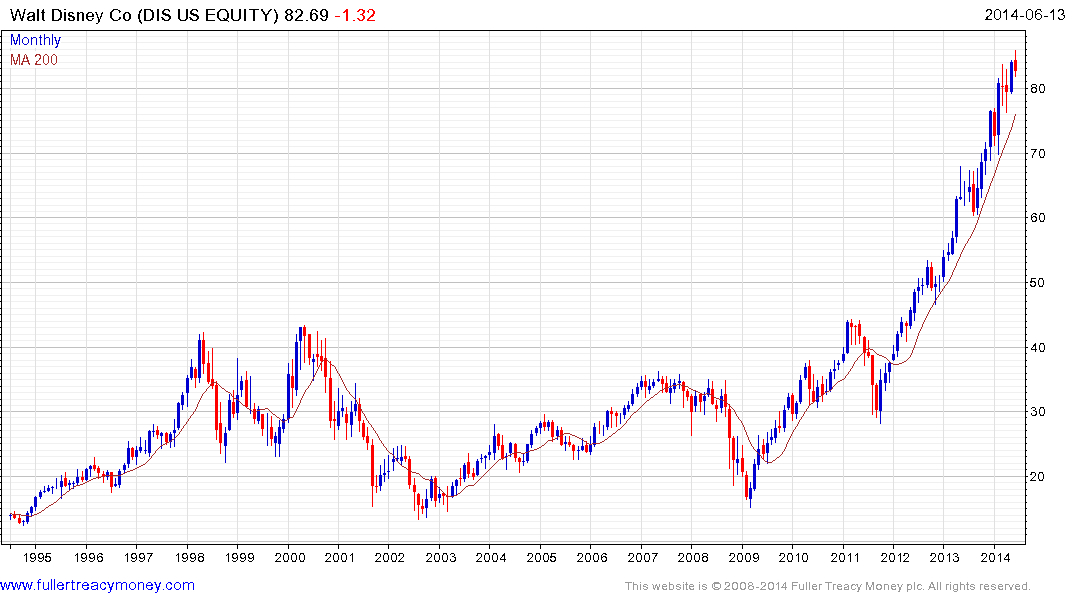 In the entertainment sector, Walt Disney completed a 14-year base in 2012 and continues to hold a progression of higher reaction lows. The share posted a downside key day reversal today suggesting another temporary process of mean reversion is unfolding. 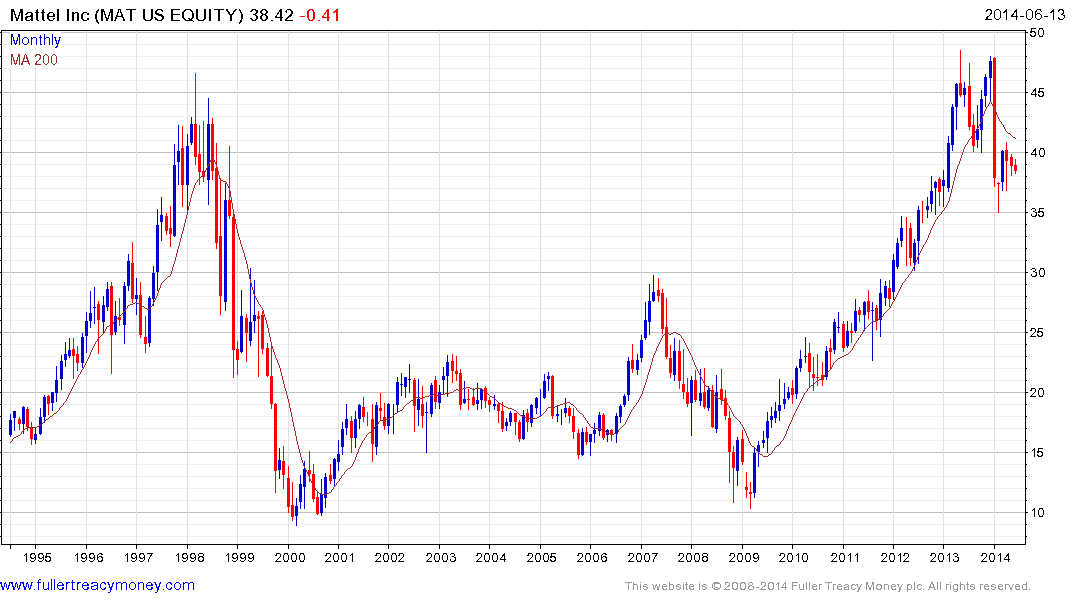 Mattel encountered resistance in the region of the 1998 peak from last year and pulled back sharply on missed earnings in the fourth quarter. The share will need to hold above the $35 area if medium-term type-2 top formation completion is to be avoided. 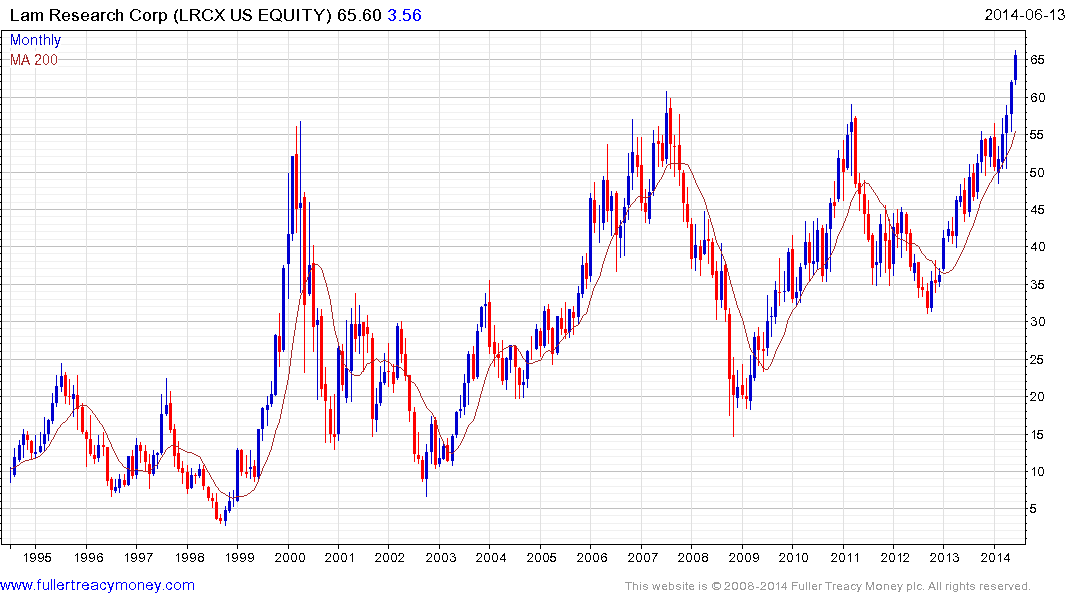 The flight to quality in the technology sector has resulted in a number of new tech companies pulling back sharply while a number of the more established names with somewhat more attractive valuations and proven business models have returned to favour. LAM Research completed a 15-year range in May and continues to extend the breakout. 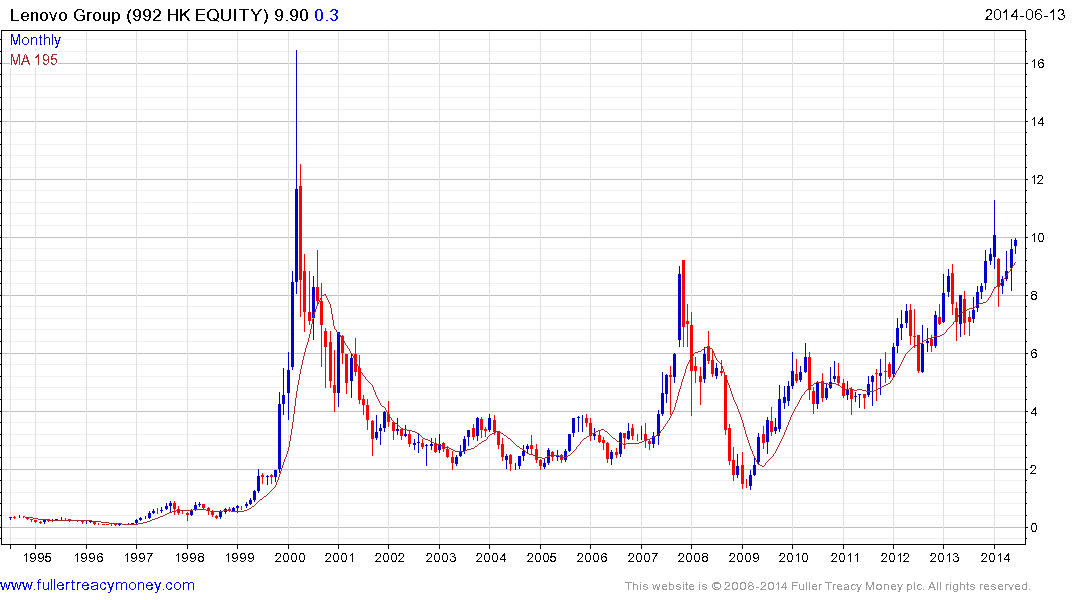 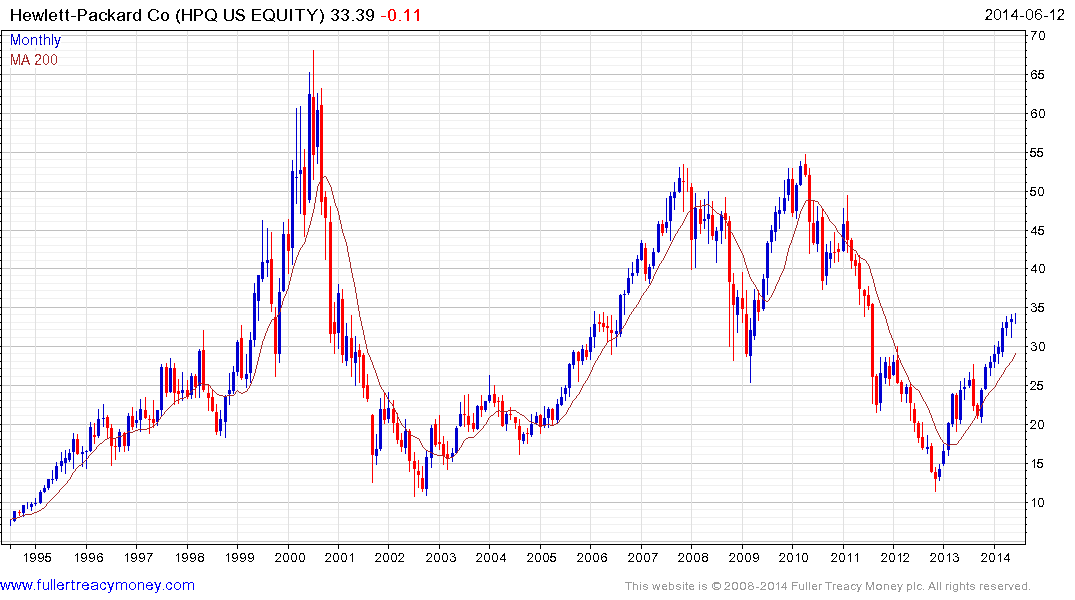 Lenovo continues to hold a progression of higher reaction lows, while Hewlett Packard continues to extend its rebound. 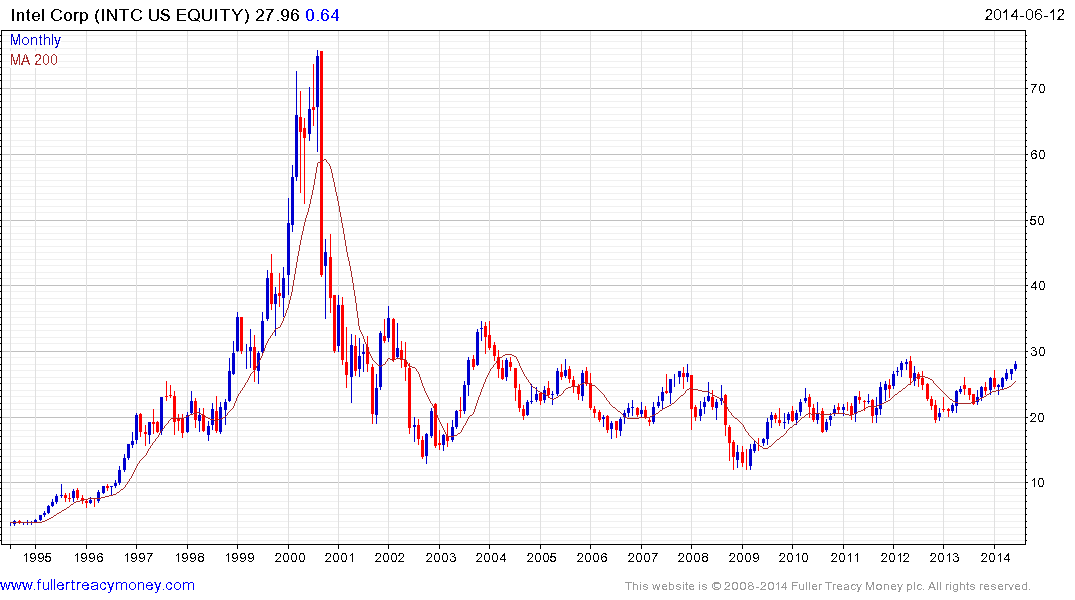 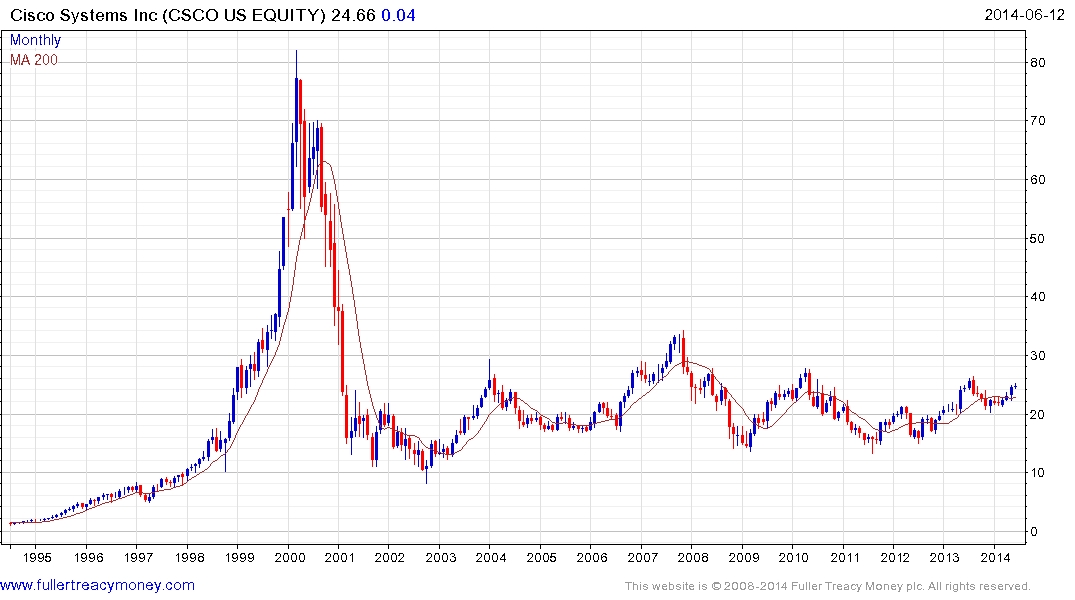 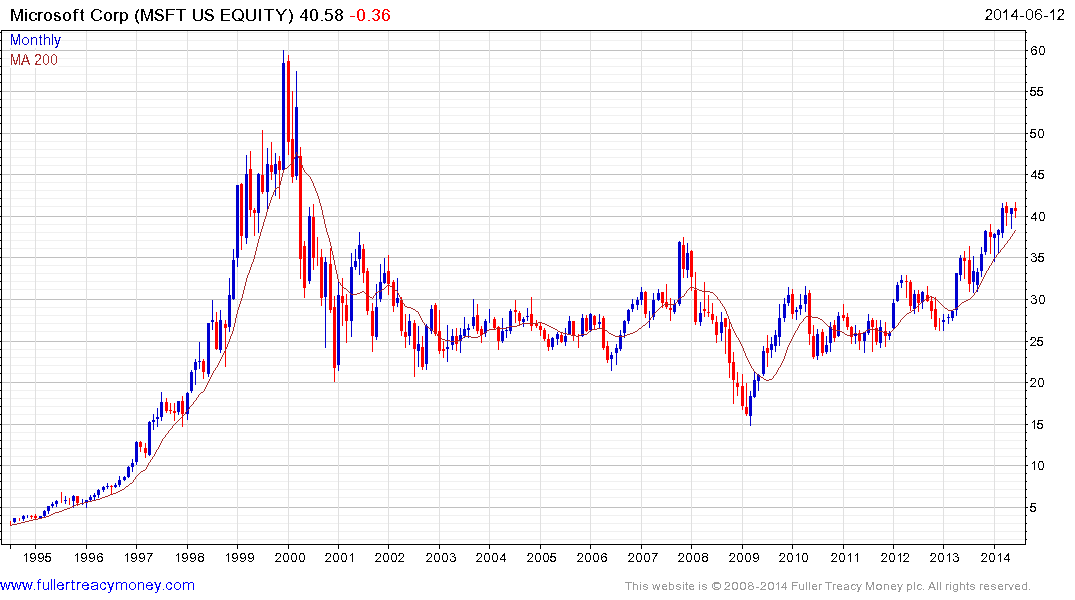 Intel is approaching the upper side of its decade long base while Cisco Systems has been basing for even longer. Microsoft completed its base in December. 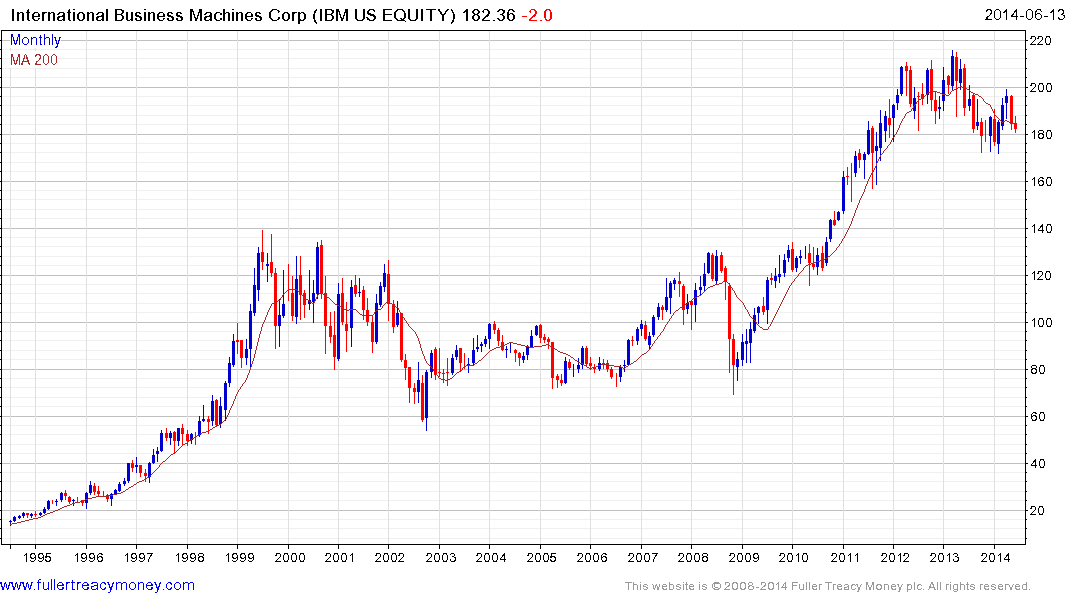 IBM has among the lowest valuations in the Autonomies but despite some exciting developments in artificial intelligence it has not been able to sufficiently demonstrate how to make money from them. The share continues to range below its peak. 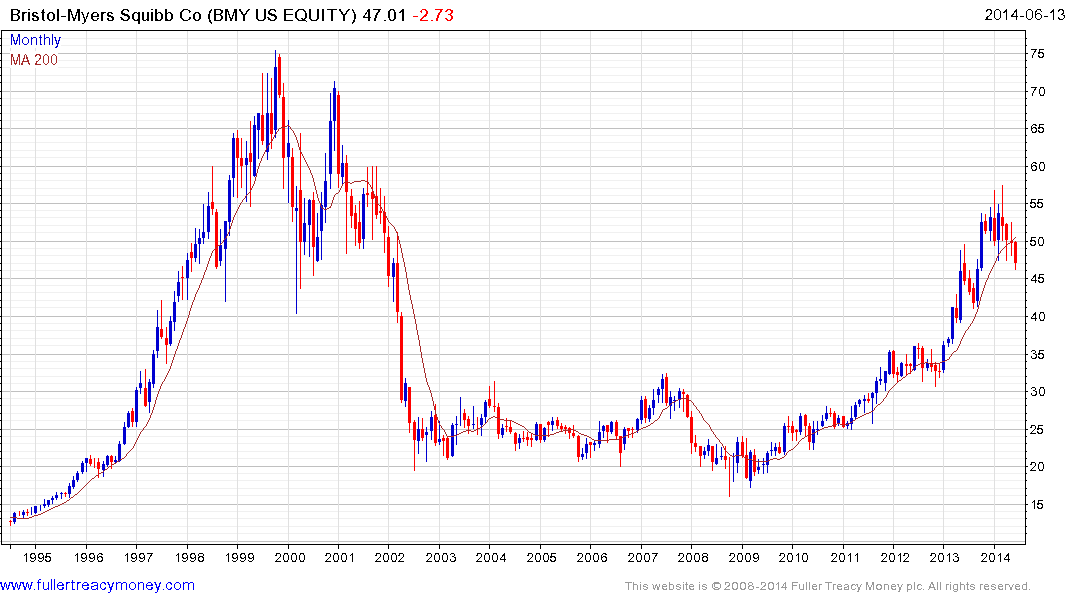 In the biotech sector, Bristol Myers Squibb is notable because while most companies have held above their March lows, BMY hasn’t. It will need to bounce back in a dynamic fashion in order to suggest a return to demand dominance. 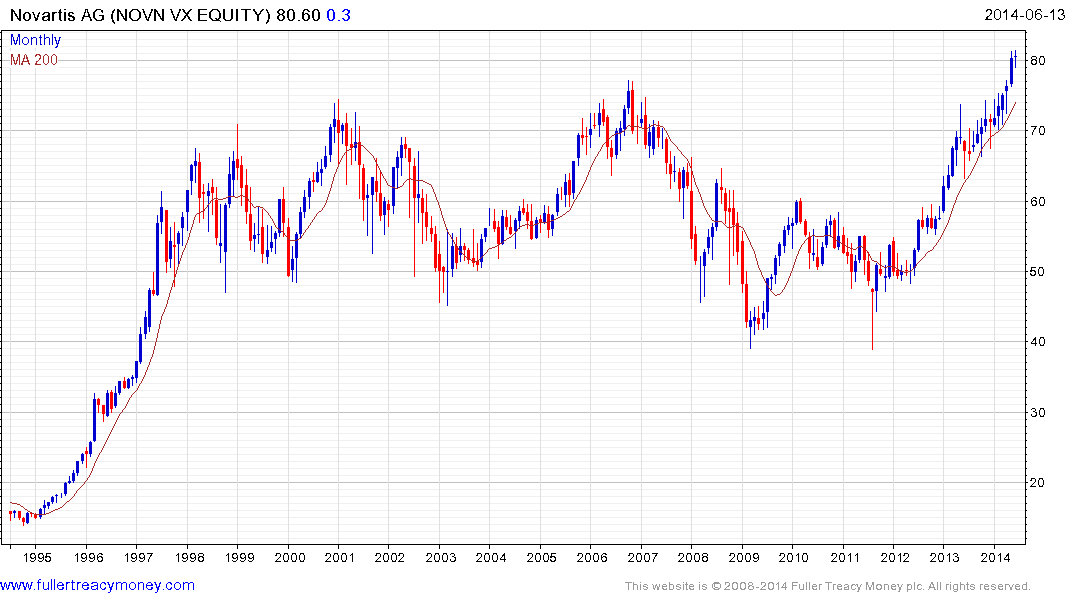 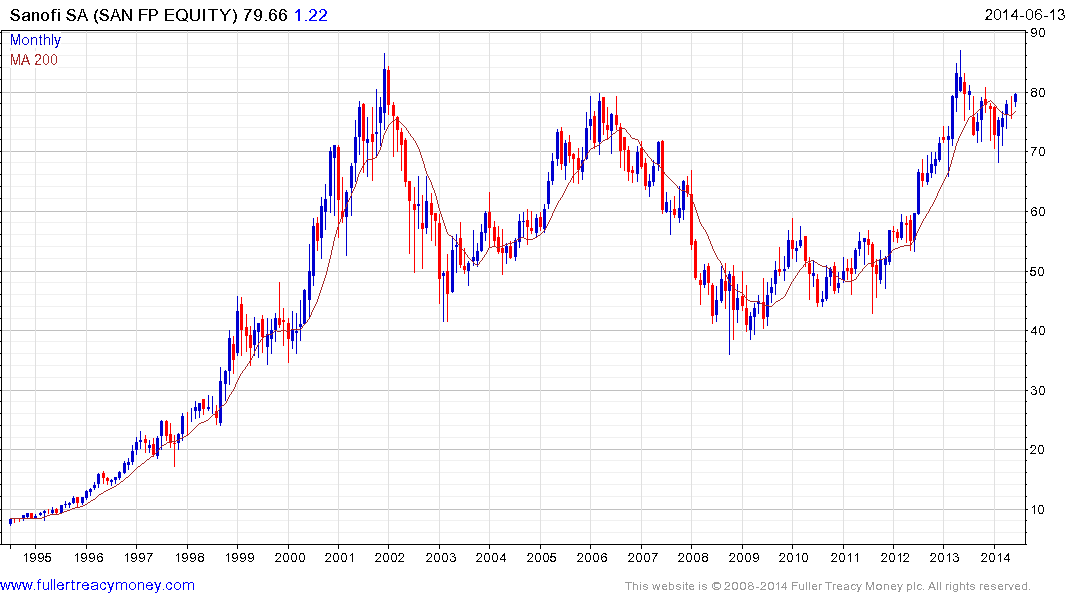 Elsewhere in the pharmaceuticals sector companies like Bayer are moving from strength to strength while Novartis completed a 15-year range in May and Sanofi is testing the upper side of its long-term range. 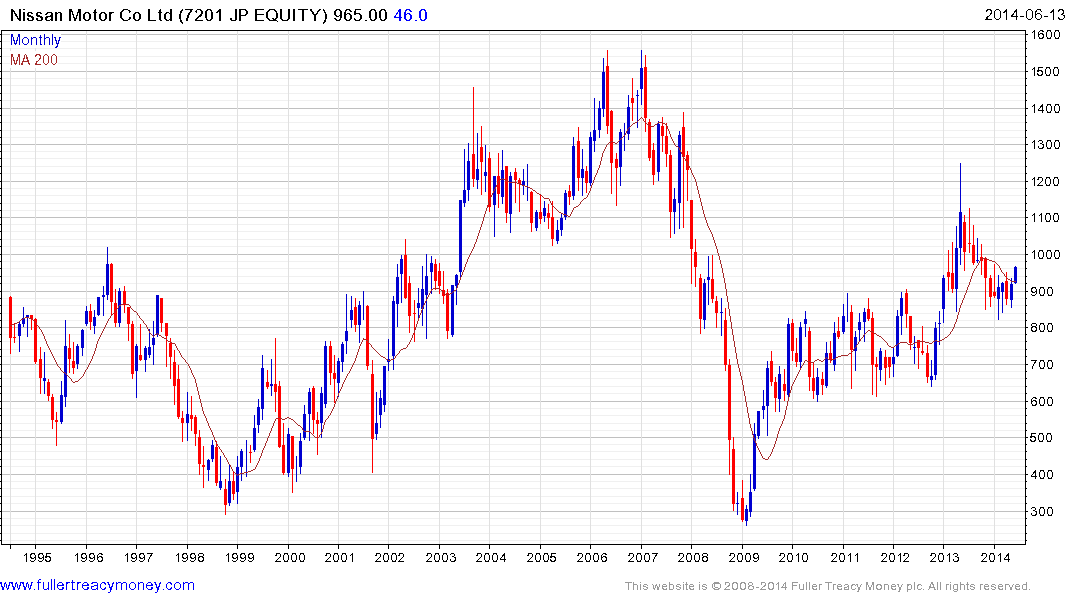 In the automotive sector Nissan found support in the region of the upper side of its underlying three-year range and rallied this week to break the yearlong progression of lower rally highs. 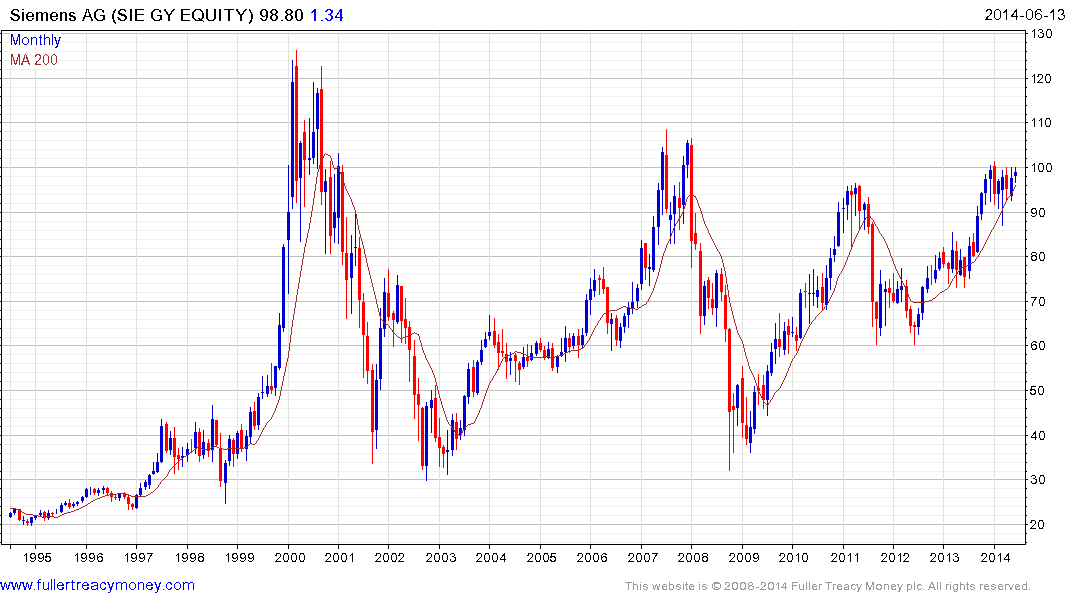 The industrial sector has been a relative strength leader for much of the last two years with companies such as Honeywell and Danaher doing particularly well. At present Siemens is ranging in the region of the psychological €100 area and looks more likely than not to be able to sustain a breakout. 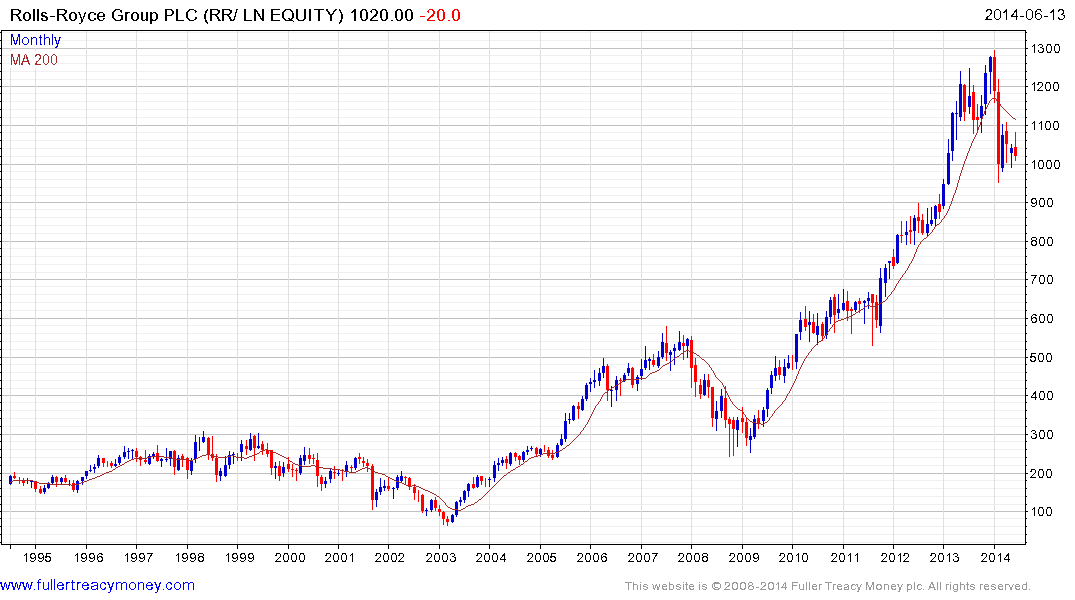 Rolls Royce’s impressive uptrend has rolled over and it will need to sustain a move back above the 200-day MA in order to suggest a return to demand dominance. 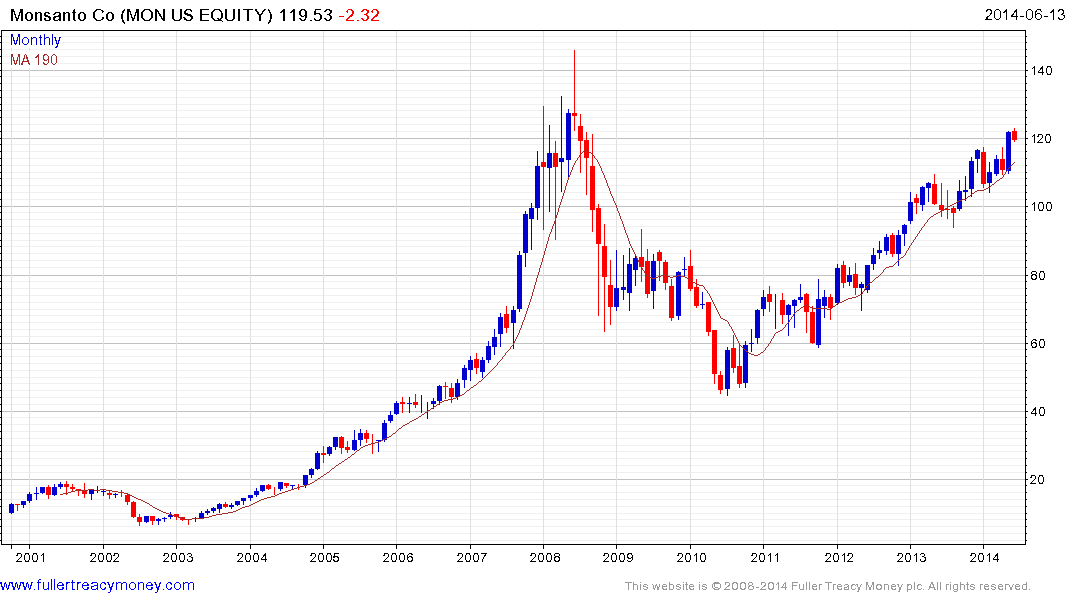 In the agriculture sector Monsanto has been trending higher in a reasonably consistent manner for nearly 5-years. 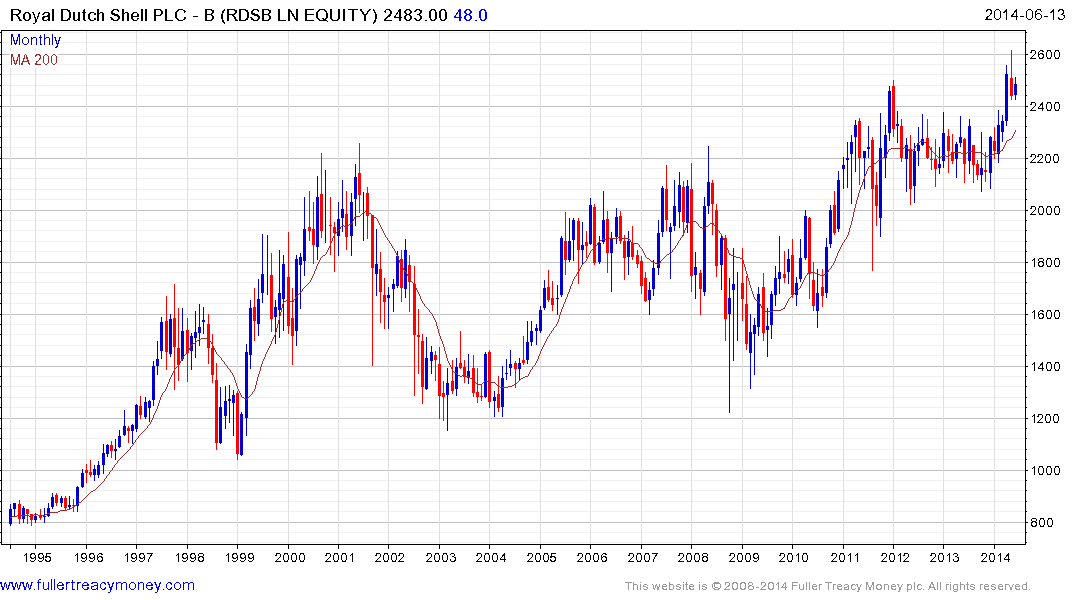