The Treasury market buckled Tuesday at the prospect of a flood of U.S. spending to fend off an economic nightmare.

Yields at the long end of the curve shot higher on Treasury Secretary Steve Mnuchin’s proposal for a $1.2 trillion stimulus package. Rates on 10- and 30-year bonds shot up more than 36 basis points, their biggest one-day increases since 1982, while an iShares ETF tracking Treasuries maturing in 20 or more years sank a record 6.7%. The U.S. 10-year yield, the world’s borrowing benchmark, is now more than 70 basis points above the record low set last week.

The surge in yields is in response to the massive supply pressure on the way, rather than any expectations for a recovery in growth or inflation, said Jon Hill, rates strategist at BMO Capital Markets.

“It’s clear there’s a recession coming, and policy makers need to do everything they can to avoid a depression,” Hill said.

Tuesday’s market reaction also follows emergency steps by the Federal Reserve to support commercial-paper markets and pump more liquidity into the system, and Sunday’s surprise interest-rate cut, which took the target policy rate to near-zero. These efforts have amplified the steepening in the yield curve, as the gap between two- and 10-year yields touched its widest point in two years, at 59 basis points.

I recorded an interview with Jim Puplava today on FinancialSense Online and he quoted back to me my statement “that the coronavirus will be temporary but the policy response is infinite” I stand by that view because the worst case scenario is we get a vaccine in a year and that allows activity to pick again. Between now and then the range of policy responses is increasing by the day.

The challenge is in how the world is going to pay the bill for stimulus being enacted today when it comes due? The bond market is beginning to price that in. There are two important dynamics at work right now. The first is in the credit markets where the fallen angels risk discussed by many investors last year is now a clear and present danger. The second is the parlous state of government finances; everywhere. 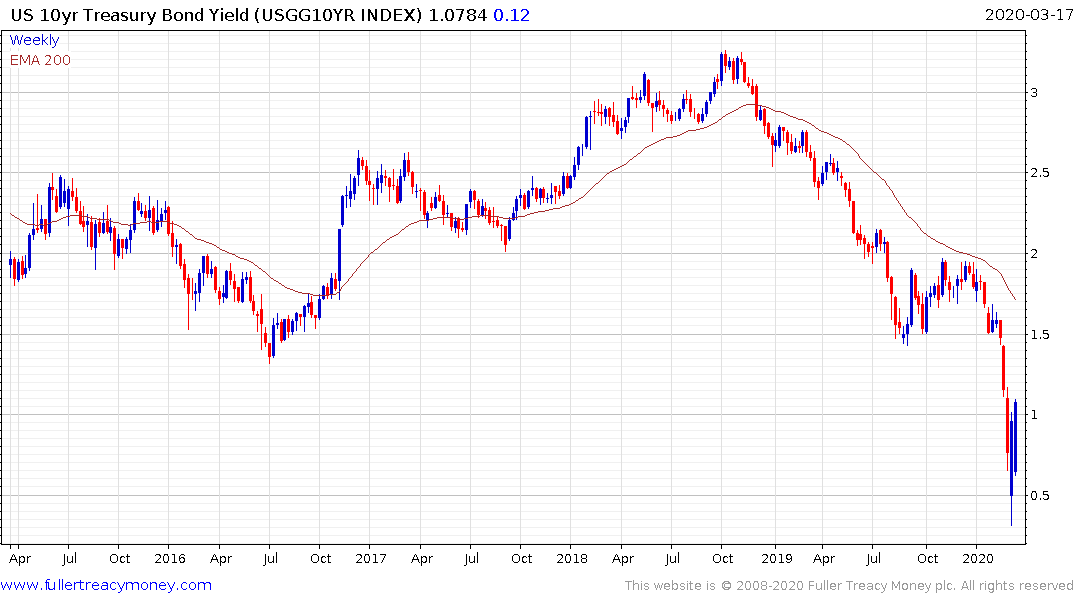 US Treasury yields have staged an impressive rebound over the last two days and look at least likely to unwind the overextension relative to the trend mean.