Remit For The Monetary Policy Committee (MPC) by Eoin Treacy

To achieve this objective, the government’s economic strategy consists of:

• operationally independent monetary policy, responsible for maintaining price stability and supporting the economy;
• a credible fiscal policy, maintaining sustainable public finances, while providing the flexibility to support the economy;
• structural reform to level up opportunity in all parts of the UK and to transition to an environmentally sustainable and resilient net zero economy, including through regulation, and an ambitious programme of investment in skills, infrastructure and innovation, in order to sustain high employment, raise productivity and improve living standards;
• maintaining a resilient, effectively regulated and competitive financial system that supports the real economy through the provision of productive finance and critical financial services, while protecting consumers, safeguarding taxpayer interests and supporting the transition to a net zero economy. 6

Central banks are “operationally” independent. All that means is politicians do not get involved in their day-to-day affairs. The central bank still takes orders from politicians. When elected officials feel the “need” for change they simply announce it in the budget. Today we “need” to save the planet so it is now the central bank’s job to do that.

We are straying increasingly far from the pure inflation mandate. First growth and development were added and now we have carbon neutral and green mandates. There is no reason to assume that is the limit of new mandates. The simple reality is central bank independence was always a handy myth but political priorities have changed.

The question of how to tackle the pandemic debt is quickly being answered. Governments will ensure there are ready markets for their securities. Telling banks and non-banks what they can buy has been ongoing since the Global Financial Crisis. That is only going to ramp up as funding needs increase. 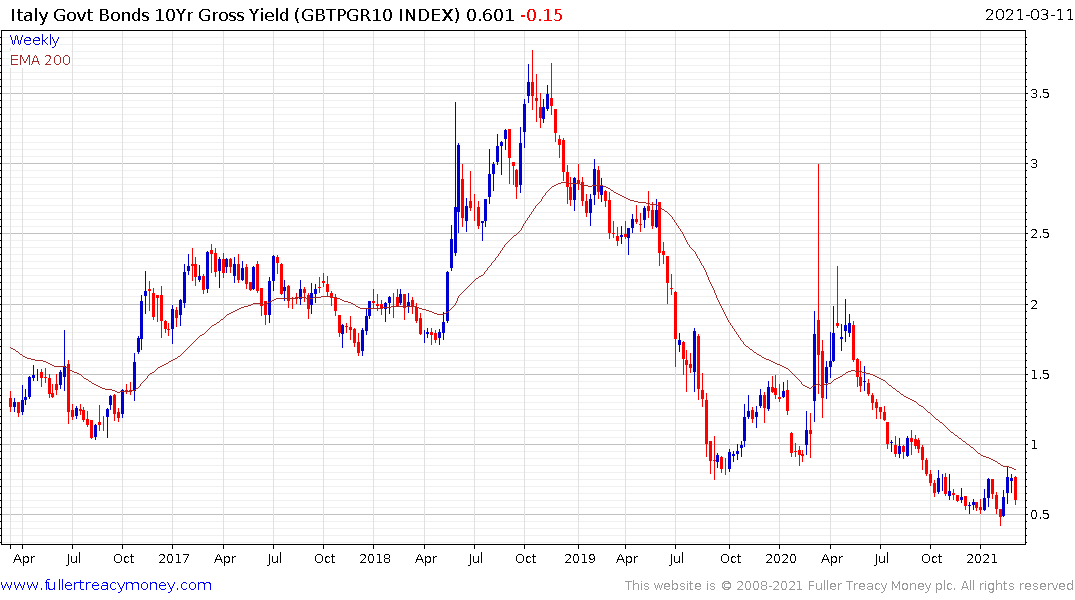 Bond yields can only be allowed to rise so high. Eventually the pressure, or threat of it, is so great the government will force the central bank to act. Ultimately the growth mandate will win out over inflation. 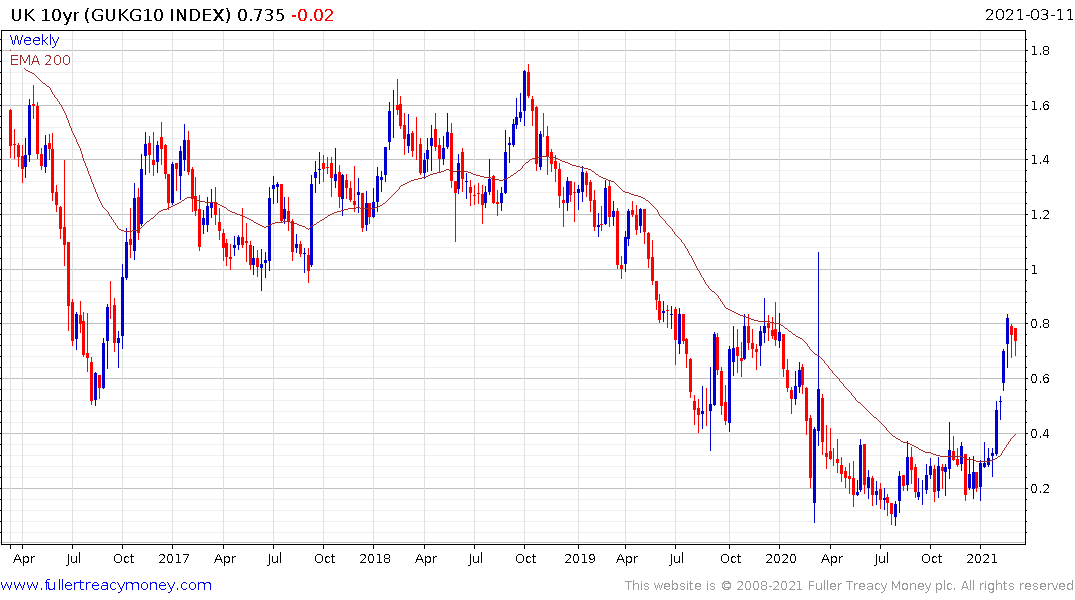 Gilt yields continue to trend higher so we have not yet reached the pressure point.

Apparently, the ECB has reached its threshold for action and is now intervening across the region to further supress yields. Here is a section from a Bloomberg article quoting Christine Lagarde which may be of interest:

“Increases in these market interest rates, when left unchecked, could translate into a premature tightening of financing conditions for all sectors of the economy,” President Christine Lagarde told reporters during an online press conference. “This is undesirable.”

This is as much confirmation as anyone might like that the Eurozone is now in the same place as Japan. They simply cannot allow rates to rise. That’s great news for countries like Italy who will have investors willing to buy the dip in their bonds for the foreseeable future. 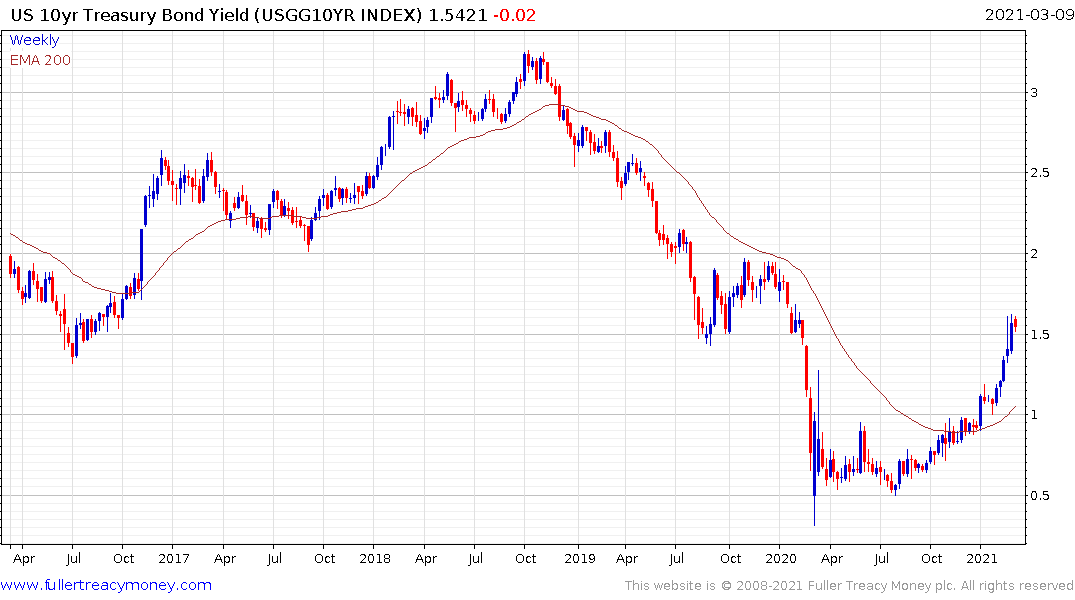 The big outstanding question is how high do Treasury yields have to go before outright action to suppress them. The trend is still consistent on the upside. The USA spent more on supplementing incomes and was already running massive deficits heading into the pandemic. Moreover, plans for more spending continue to ramp up. Consumers are becoming conditioned to expect successive rounds of new money. The Dollar continues to trend lower in advance of that potential. 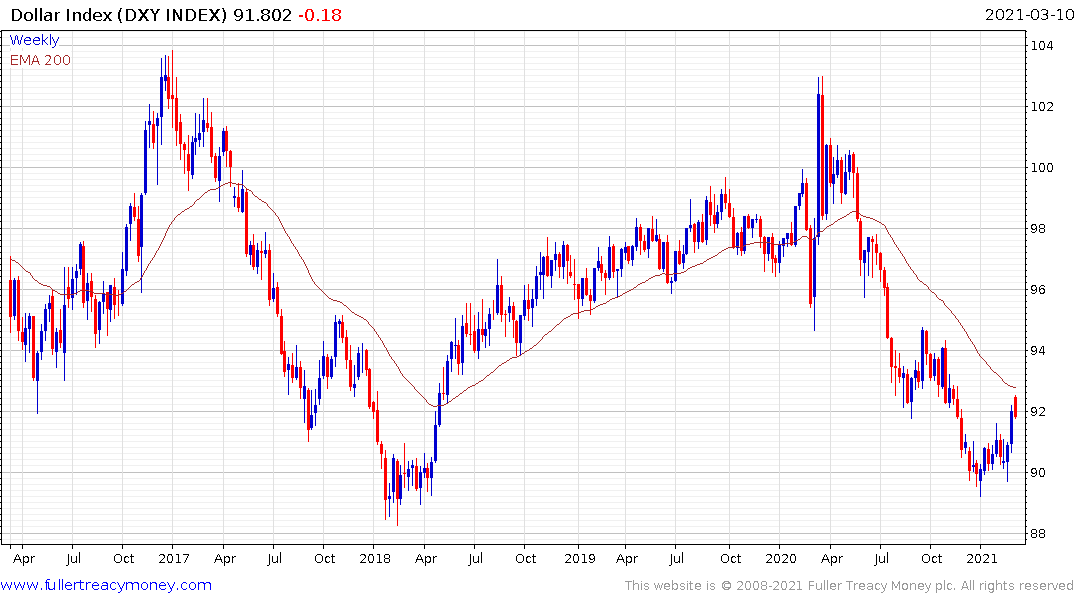 Against this background it is reasonable to expect asset prices to rise. The S&P500 followed the Dow Jones Industrials to a new high today. With the Dow at a new high and the Dow Jones Transportation Average also extending its advance we have the technical conditions for a Dow Theory buy signal. 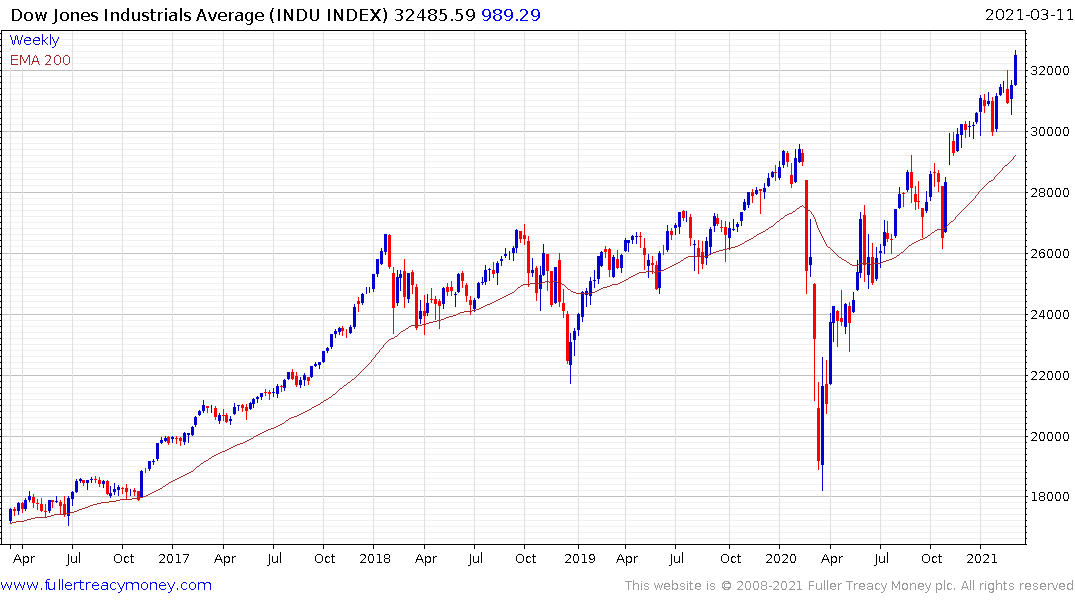 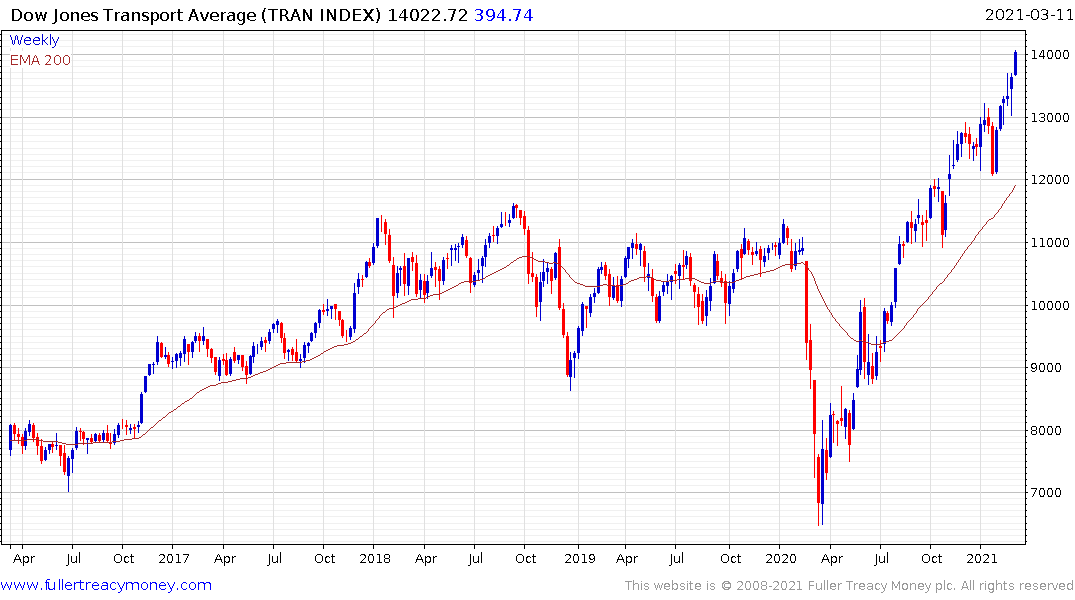 The successful sale of Beeple’s compilation of digital art for $69 million, through the emerging non-fungible token (NFT) market is another symptom of this monetary devaluation. 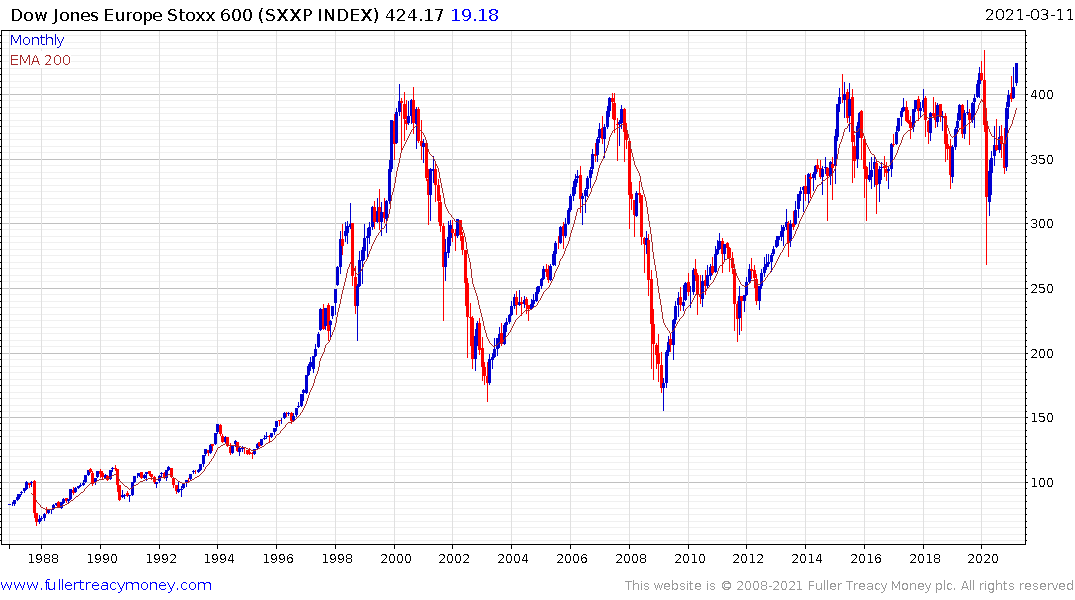 The Europe STOXX 600 is now on the cusp (again) of completing a 21-year range.