The Coronavirus crisis, the most serious event since the Global Financial Crisis (“GFC”) of 2008/2009, has set in motion a series of governmental policies whose unfortunate effect is to choke both demand and supply in the global economy.  These policies - prudential measures taken by governments united in their desire to appear to be “doing something”- are likely to be worse, economically speaking, than the disease itself.  Relief comes only with the passing of time or the finding of an anti-viral remedy, the latter a distant prospect at this stage.

Earnings news, monetary news, fiscal news and pandemic news are all following the disheartening course that we feared.  An emergency Fed meeting last Sunday, slashing rates to near zero, failed to reassure.  The next day, Wall Street produced the second of 2 record points drops in a week, falling -13%.  Equity markets have fallen by an average of about -30% from their January highs.

Equity markets are now oversold and distorted by panic.  The market finds it hard, if not impossible, to “price” risk when an end to the crisis is undefined and earnings unknown. And what discount rate should one use in a global panic when rates are near zero?  Many stocks trade under “fair value” on “normalized” earnings.  But the risks being taken by governments are such that there may be worse to come: bankruptcies in directly affected sectors like leisure, hospitality, airlines, hotels and “bricks and mortar” retail.  There may even be nationalizations in troubled sectors.  On the other hand, other sectors, also hit hard by the same waves of panic selling, may emerge as new long-term leaders in a changing world where personal safety, health fears, depersonalizing technology and e-commerce may enjoy further and more widespread adoption.

Here is a link to the full note.

Millions of people just lost their jobs in the retail and restaurants sector. Weekly jobless figures are reported with a two-week lag, so today’s 281,000 increase is reflective of the week ending March 7th. Most cities in lock down made the decision over last weekend so next week’s figure will be higher but the release on April 2nd is likely to take jobless figures to new highs. The only limiting factor is the ability of people to sign on for benefits given the system’s capacity restraints. 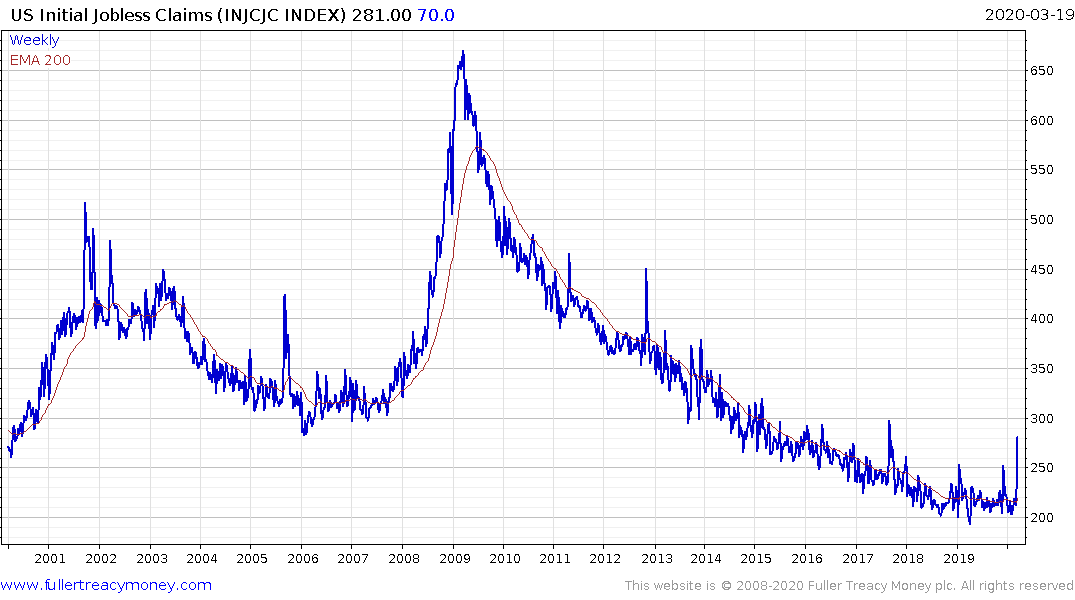 Since employers are the biggest supplier of health care in the USA, that also means millions of people are now bereft of health insurance at exactly the same time they need it most.

I don’t think I have spent this much time on the phone since I worked at Bloomberg 17 years ago. Everyone has a sudden desire to talk and share their experience. This is very welcome because I am getting some welcome insights into what is going on in the real world without leaving my home. Two people have told me in the last 24 hours that credit lined up to purchase commercial real estate has fallen through with banks hoarding cash. 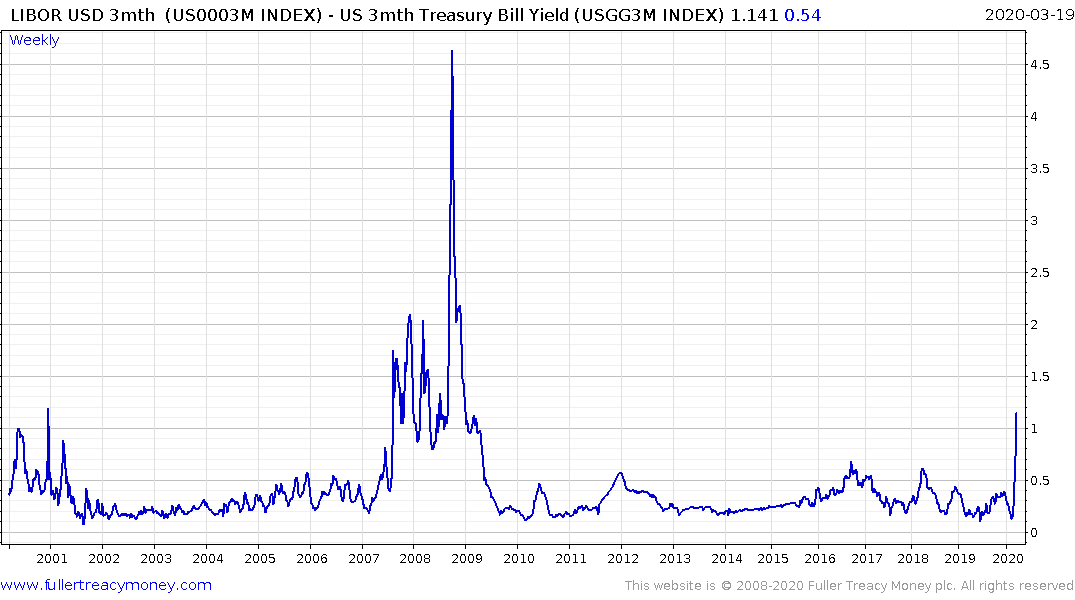 The TED spread has clearly broken on the upside and confirms tightness in the credit market. Banks have no choice but to hoard capital because there is a wave of defaults about to hit which they have been hitherto unprepared for.

If banks are restricting credit that puts pressure on businesses in addition to the virus slowdown. If tenants cannot pay rent, mortgages on properties become delinquent, which puts pressure on banks. The first measure is to supply the banking sector with access to virtually limitless money via the discount window. The second is to pass a forbearance bill which gives payment holidays on all debt and extends maturities by the length of the delay. The biggest victim from this strategy will be pension funds who have no contributions coming in but still have to make distributions.

That suggests a potentially lengthy period of support building will be required before we see a new broad market trend evolve. 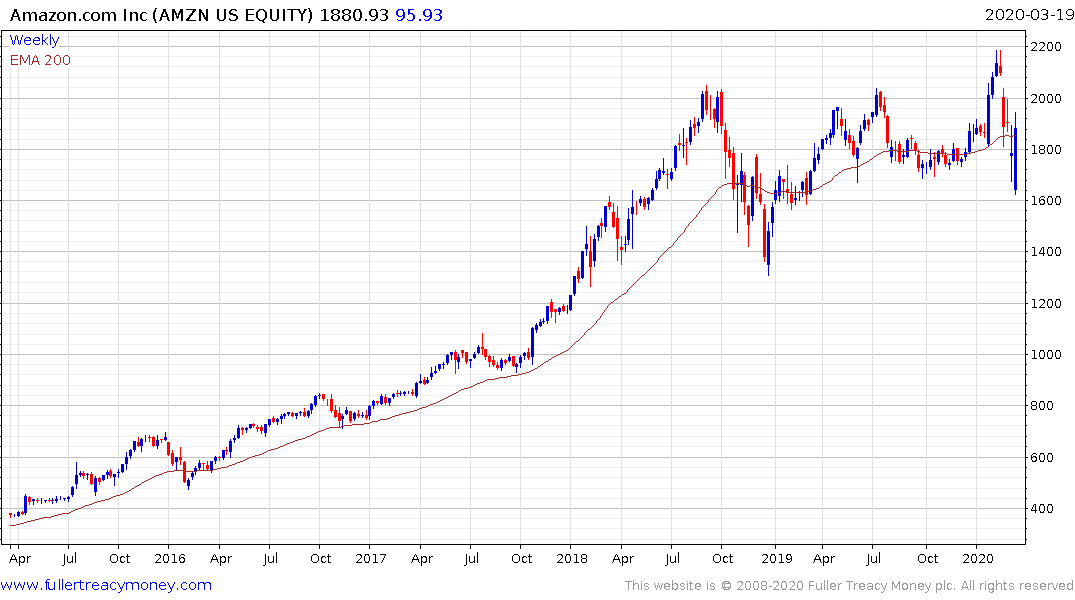 However, in any crisis, there are always shares that avoid the carnage. Amazon continues to rebound as more people are forced to shop on line. The company has banned 3rd party shippers from sending in inventory for anything but essential health and grocery products. That is going to have a knock-on effect for the wider economy as many small businesses depend on Amazon sales of consumer discretionary products so if it can hold its lows that would be a significant comfort for investors. 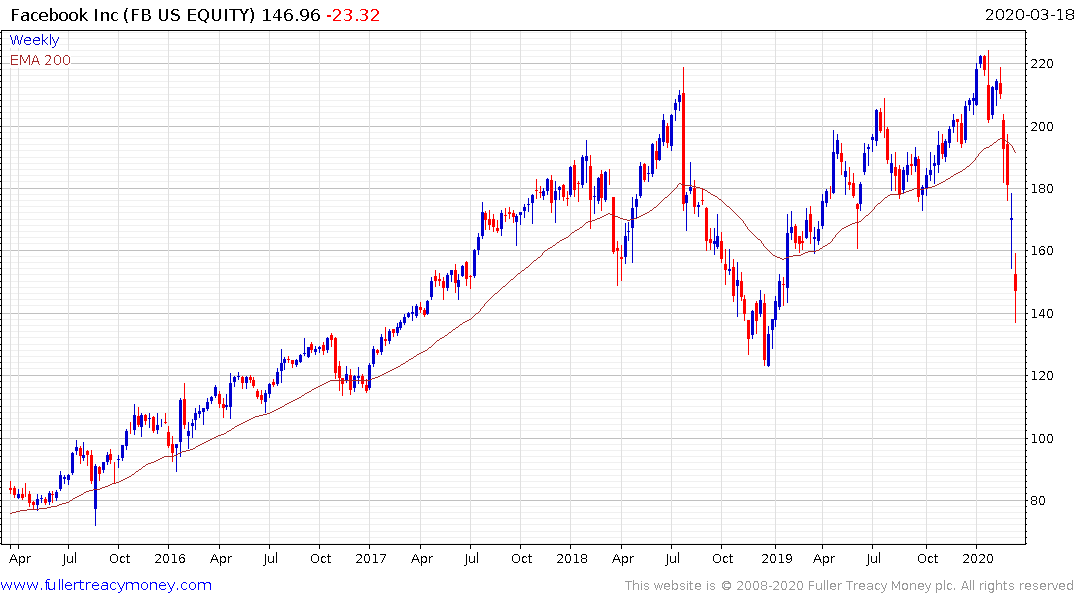 Facebook is currently rebounding from the region of its 2018 lows and is not reliant on physical infrastructure. 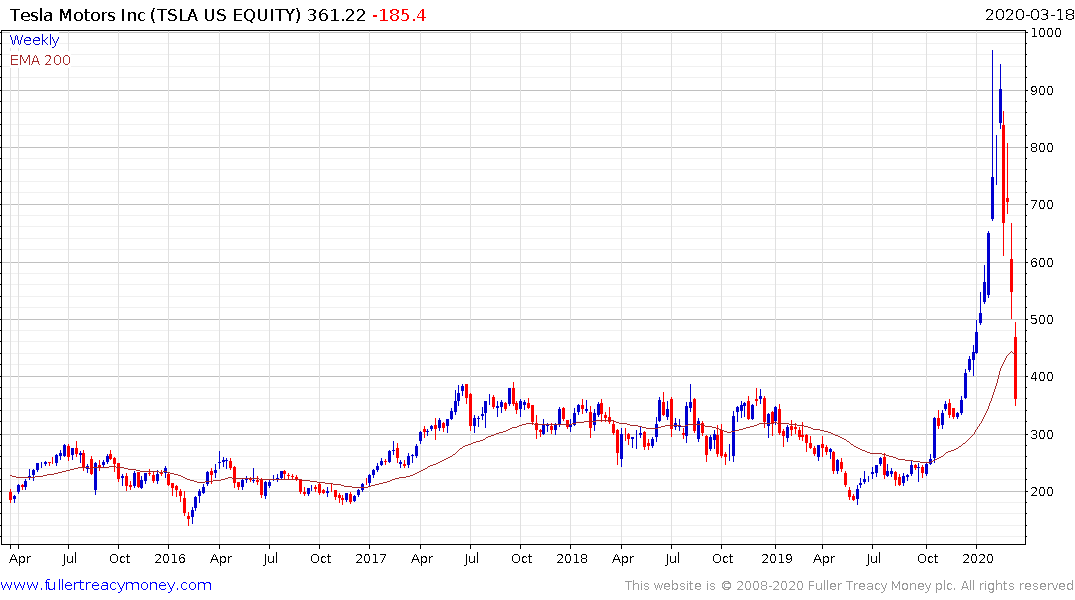 Tesla and now unwound all of its overextension relative the trend mean and is bouncing from the upper side of its underlying range.

The performance of these go-to buy the dip shares will be measured in how well they hold their respective rallies and improve upon them.

We have very deep oversold conditions so at least a bounce is looking likely. The problem with putting faith in the first bounce following a major decline is there are large numbers of investors with stale inventory they no wish to unload. That suggests a retest of any short-term low that forms will be likely.