Reddit's Profane, Greedy Traders Are Shaking Up the Stock Market
Comment of the Day

Reddit's Profane, Greedy Traders Are Shaking Up the Stock Market by Eoin Treacy

The do-it-yourself traders of r/WSB are waging a kind of guerrilla warfare in the markets, trying to exploit what they see as weaknesses in the system to move prices where they want them. For anyone who wondered about where the small day traders who made the 1990s so wild went, meet the 2020 version. After years of indifference, individual investors seem to be finding their way back to stocks, for better or worse. They’re flexing muscles in ways that can easily call to mind excesses from the dot-com era.

“There is no denying the fact that in the month of February 2020, the public is back,” says Julian Emanuel, chief equity and derivatives strategist at BTIG LLC. He thinks the S&P 500 can jump an extra 10% because of small-investor enthusiasm. “This bull market is not going to end until the public falls in love with stocks, and that process may just be beginning.” Of course, timing the moment when irrational exuberance gives way to a mass exit isn’t so easy. Chatrooms where stocks were hyped are seminal artefacts of the 1990s boom and the following bust. They were a setting for bare-fisted digital brawls among all manner of hustlers and promoters, many of whom could move shares on a dime—sometimes just enough so they could get out and leave others holding the bag.

Back in the ‘90s an aspiring day trader needed to go to an internet café or dedicated trading location to get multiple trades done intraday. Today it takes nothing more than a phone app and can be done anywhere at any time.

It used to be a monumental decision on whether to quit one’s job to pursue trading because it was considered impossible to do both fruitfully at the same time. Today that decision is not as relevant although anyone who thinks trading is easy is in for a hard lesson. The temptation in a momentum driven move is to mistake a bull market for brains. Actively participating in online forums, while trading around the edges is easily done without the need to make big decisions about one’s personal life, other than with one’s money of course.

The last time we saw this kind of activity was with bitcoin in 2017, when online forums were thronged with speculators. The same kind of fervour has driven the hydrogen and space sectors wild over the last month. This is evidence not just of trader activity but the return of retail investors, in force, is a reflection of investors confidence in future potential. That is generally seen as a signal that a lot of good news has already been priced in.

The important point is that if we do in fact see governments and centrals banks flood their economies with stimulus, that is likely to support asset prices and will be lend further impetus to speculators. The market’s belief in a Powell Put remains a strong conviction. If the Fed goes ahead and signals additional rate cuts that has the potential to fuel a bubble in asset prices. 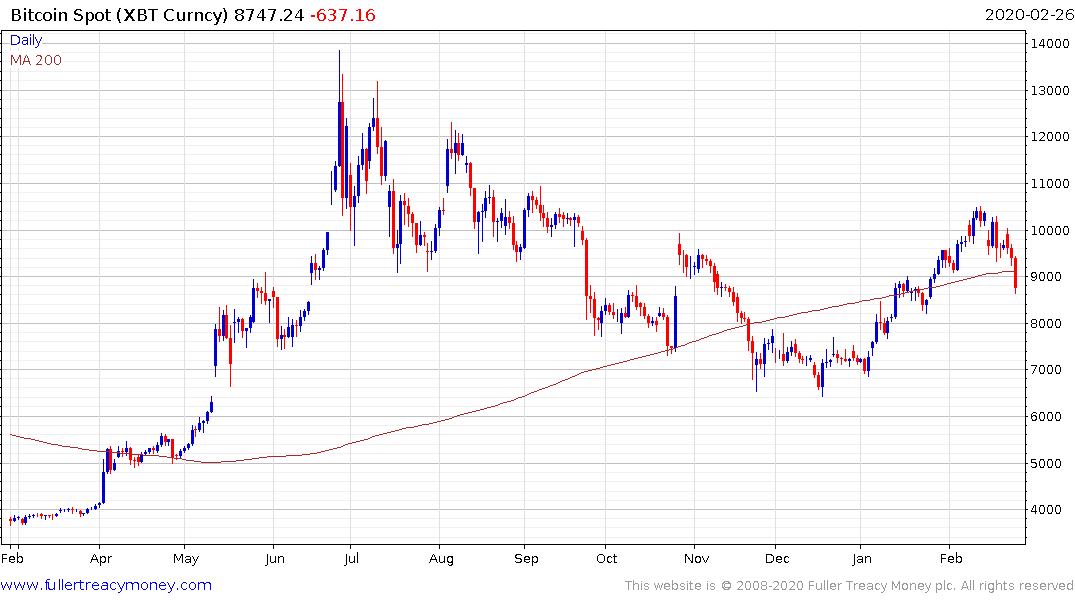 Meanwhile, bitcoin broke below its 200-day MA today, confirming near-term resistance near $10,000. That weakness raises questions about the ability of the asset to act as an uncorrelated asset. That is particularly relevant as bonds and gold have rallied during a volatile period for equities. If bitcoin is more of a risk asset than a safe haven that is likely to lead to some additional re-evaluation of the investment case for owning it.