Karsan, who has 24,000 Twitter followers, floated the scenario on The Derivative podcast last week.

The Squeeze
Once an obscure dynamic in the market plumbing, gamma squeezes are the talk of both Wall Street and the amateur crowd following the GameStop drama.

It goes like this. When an investor buys a call, the dealer who sold the contract will typically hedge by purchasing the underlying stock. The more the latter rises toward the option’s strike price, the more shares the market maker will theoretically have to buy. That can supercharge stock prices as shares rise and dealers buy more.

And the dynamic works in reverse, too.

Dealers who have sold puts will hedge themselves by selling the underlying shares. As the price drops toward the option’s strike, they will sell more and more.

Mobs are emotional, extremely aggressive, thrive on contradiction but they are also fickle. They can look like the strongest army in the world until they lose cohesion. Then they fall apart and turn into the weakest. Mobs thrive as long as they are growing and the reason for that growth is still compelling. As soon as it ends, they dissolve quickly. As GameStop’s mob dissolves it might be some time for a crowd to coalesce around a new idea. There are plenty of candidates from biotech to silver to micro-caps and cryptocurrencies. 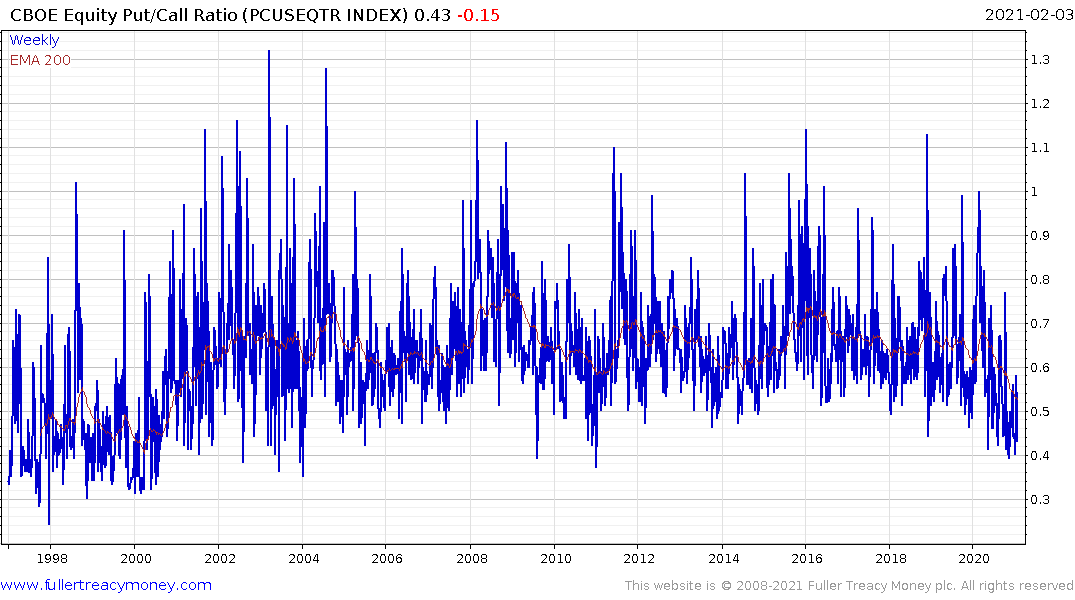 The Put/Call ratio is close to the lowest readings since the early 2000s. The only time it was lower was during the big bull market in the 1990s. It is clear from the above chart that there were bouts of volatility in the period from 1998 to 2000 and yet the market also accelerated higher. The confluence of low demand for downside protection and rising interest rates were the causal factors behind the eventual popping of the bubble. 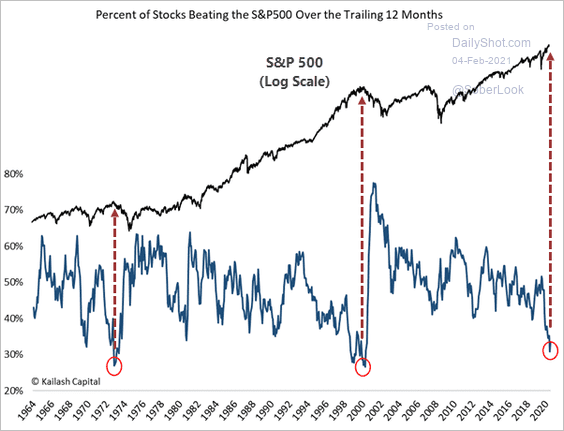 At present the number of shares outperforming the S&P500 is close to historic lows. It suggests the widening breadth that was a feature of the market outlook in Q4 is dissipating and that the migration to smaller caps is still underway. This chart also helps to illustrate how interest rate sensitive the market is. The higher yields move, the greater the risk of stock market weakness and an increase in downside protection. 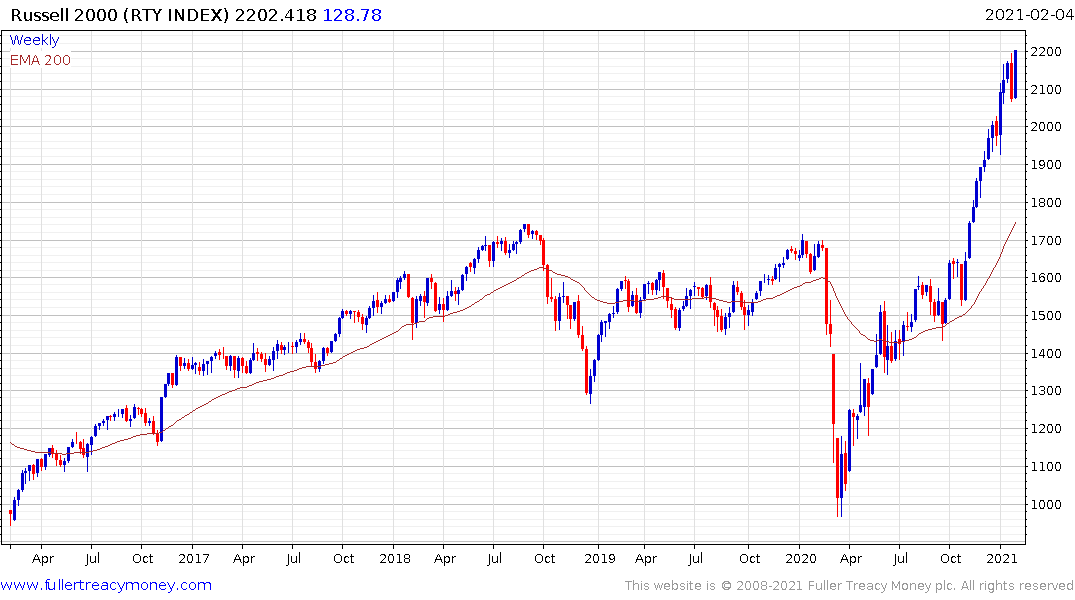 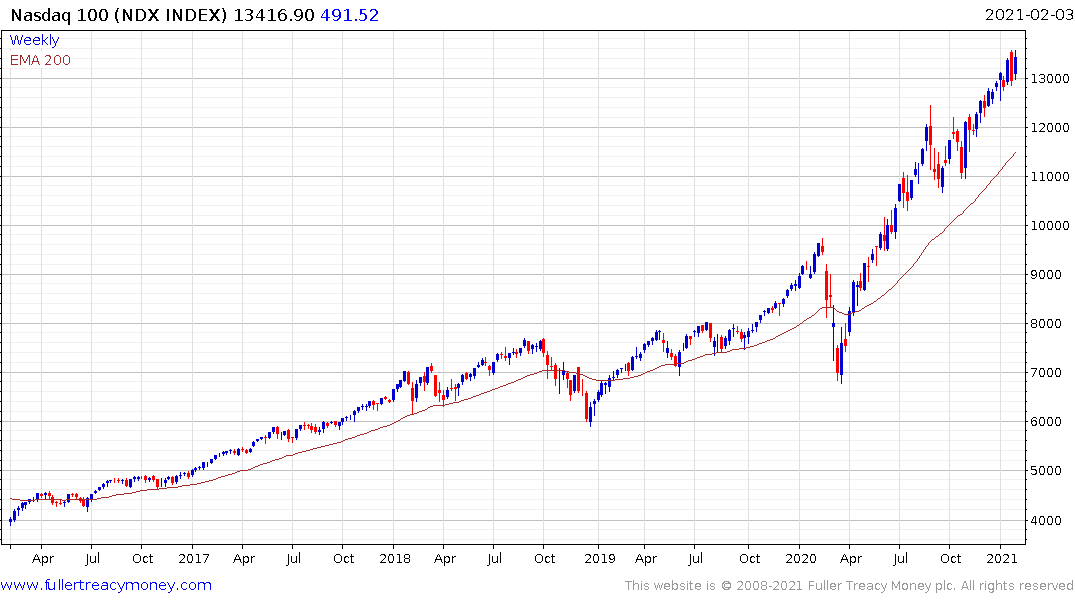 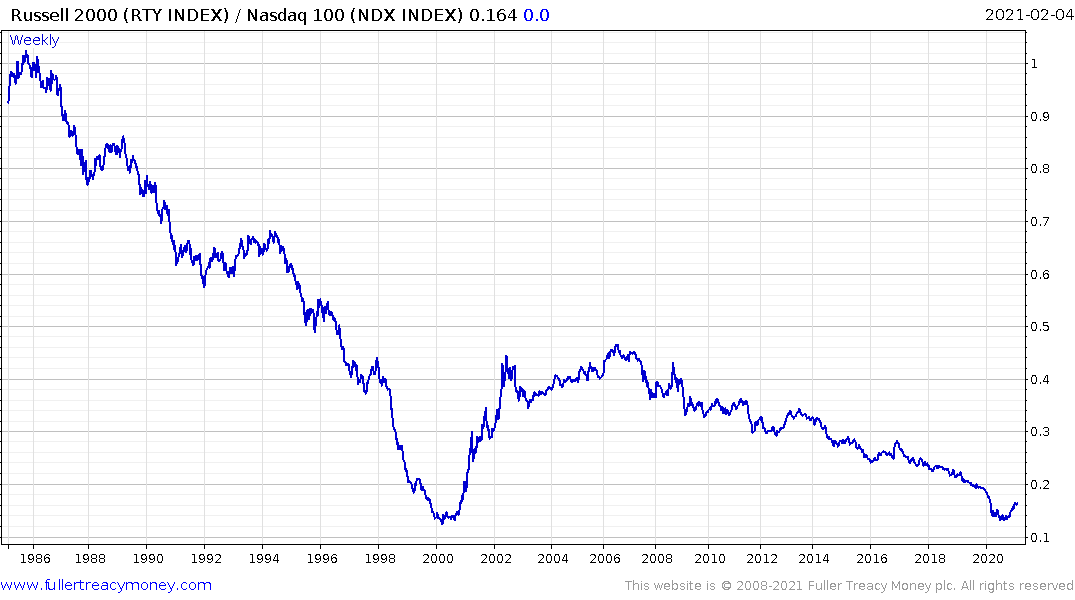 The Russell 2000 is steadying relative to the Nasdaq-100 following a 12-year downtrend and from the region of the 2000 lows.