Executives are paying bigger dividends to show investors their companies are stable, said Jonathan Garner, Morgan Stanley's chief emerging-market and Asia strategist. Income in the MSCI Asia Pacific Index may rise 32 percent in the next two years, based on analysts' estimates compiled by Bloomberg. That compares with forecast profit growth of 22 percent for the Stoxx Europe 600 Index and 24 percent for the Standard & Poor's 500 Index through 2013.

"In Taiwan, there has been a change in the attitude toward dividends," said Garner in a telephone interview from Hong Kong on Sept. 22. "In the late 90s and early 2000s, there was not a focus on dividend yield, and there is much more of that now, especially in the technology space."

About 90 percent of technology companies in the MSCI Taiwan Index pay a dividend, compared with 78 percent of computer firms in MSCI's Asia index, data compiled by Bloomberg show. The 21 percent loss in the Taiex this year has more than doubled the payout rate to 4.8 percent from 2.2 percent in January 2010.

Eoin Treacy's view High growth, strong earnings, low debt, the expanding middle classes and firm currencies are among the most popular reasons cited by investors for participating in Asian equities. Over the last decade a trend of improving corporate governance has been observable right across the region. This is an important development and is another compelling reason for abandoning long held prejudice that Asia is high risk compared to Europe and the USA. While most of the companies with solid records of dividend increases are listed in Australia, Japan and India, a pattern of increasing dividend payouts is observable regionally.

The S&P Pan Asia Dividend Aristocrats Index has been a relative outperformer but has not been immune from the selling pressure that enveloped Asian markets over the last couple of weeks. It fell below its 200-day MA in early August, ranged below it for the better part of a month and extended the decline last week. It is oversold in the short-term and the potential for a relief rally has increased. However a sustained move above 2700 will be required to signal demand is beginning to return to medium-term dominance. The simple average of the constituents' dividend yield is currently 3.3%. The total return index has held up somewhat better but shares a similar pattern. 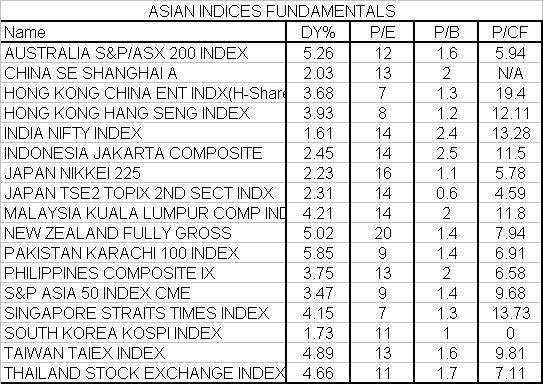 This table of Asian indices with their respective P/Es, Dividend Yields, Price / Cashflow and Price/Book reflects the competitive yields available on Asian stock market indices. Australia and New Zealand are, unsurprisingly, close to the top but Taiwan, Singapore and Thailand all also have yields of more than 4%. The pullbacks in these indices to date have undoubtedly been troubling for investors and the concurrent weakness of the relevant currencies has reflected widespread deleveraging.

Nevertheless, Asia remains the engine of global GDP growth. Companies, governments and consumers generally have relatively low debt levels. Monetary tightening remains a headwind to stock market performance but when this changes it could well act as a catalyst to initiate reentry to these markets.

The TWSE broke below its 2010 lows today having ranged above them since early August. A clear upward dynamic would now be needed to signal a failed downside break and to counter current scope for additional weakness. The US Dollar hit a new closing high against the Taiwan Dollar today suggesting continued flight to that currency.

The Strait Times Index has a similar pattern of underperformance and the US Dollar has held its gain against the Singapore Dollar.

The SET Index had been among the best relative performers but gave way to selling pressure last week and broke below the February low today. It is oversold in the short-term, closed well off its low today and potential for a relief rally has increased. The US Dollar has been particularly strong against the Baht.

The Jakarta Composite and the Indonesian Rupiah have similar patterns to the Thai instruments.