The downbeat assessments come amid a meltdown in financial markets not seen since the height of the global financial crisis in 2008. It marks a grim start to the week for European Central Bank policy makers, who meet in Frankfurt and may be forced to lower interest rates and step up bond purchases. The U.S. Federal Reserve has already acted, with an unexpected easing last week.

“I want a strong, massive, coordinated response,” Le Maire said on France Inter Radio as the central bank slashed the outlook for the country’s economic expansion this quarter to 0.1% from 0.3%.

“We should work on a stimulus plan with fiscal and budgetary measures, and tax cuts, so that when the epidemic crisis is over we can relaunch the economic machine,” he said. The virus is another blow to the euro area’s second-largest economy, after disruption from strikes caused output to shrink at the end of 2019.

“This slowdown is potentially severe but temporary,” Bank of France Governor Francois Villeroy de Galhau said in a rare statement accompanying the report.

The markets tend to test new central bankers and Christine Lagarde’s honeymoon period is definitely over. The ECB will be expected to lay out what kind of assistance it is willing to provide. While room for interest rate cuts is limited because they are already so low, there is plenty they have do to ensure ample liquidity in the system.

The European economy was already weak following the negative influence of the trade war between the USA and China, so the knock-on effects of restrictions on movement, spending and public gatherings is going to put further pressure on economies. As the economic burden for tackling the spread of the virus increases there are likely to be active conversations on the need for significant fiscal stimulus. 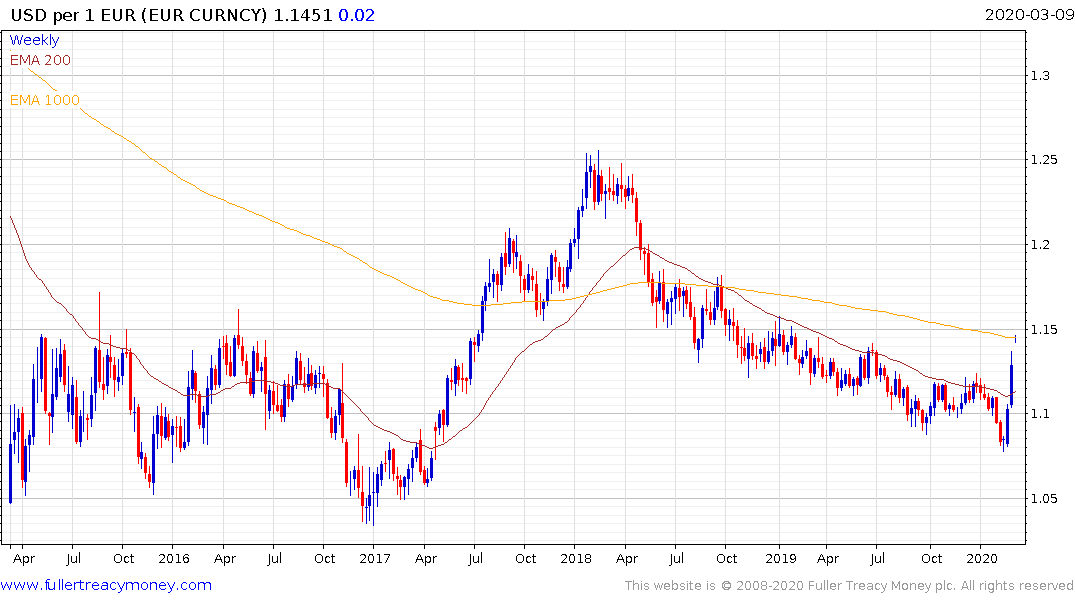 The recent strength of the Euro is also something the ECB is likely to be aware of. With the policy meeting later this week there is clear scope for some jawboning to arrest the speedy advance of the currency. However, a sustained move back below the trend mean would be required to question the medium-term upward bias. 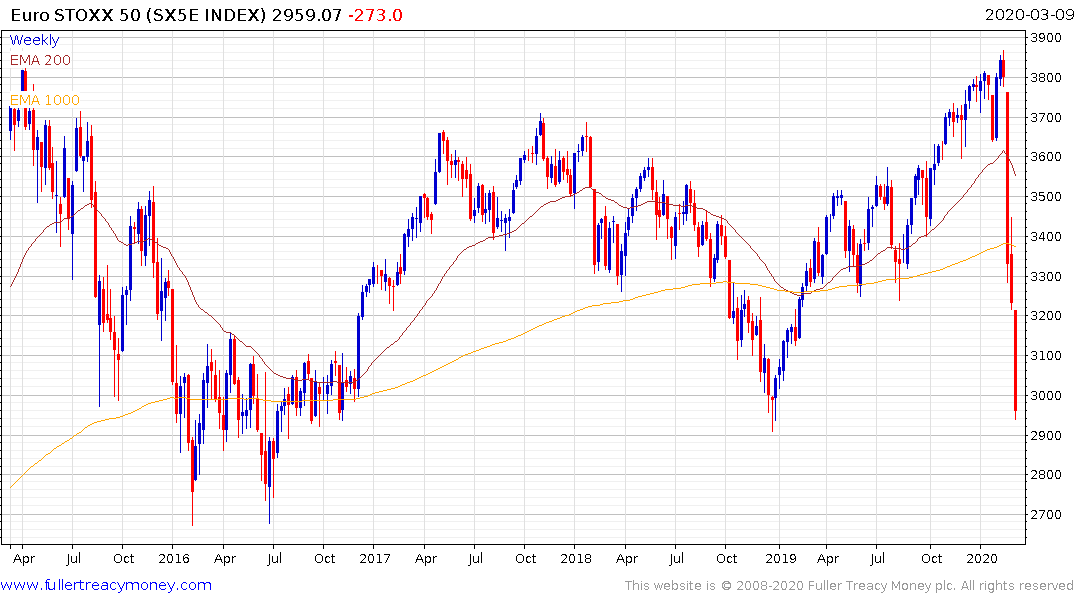 The Euro STOXX 50 Index failed to hold the move to an incremental new high in February and has collapsed back down to the lower side of the five-year range. While oversold in the short-term the pace of the virus spread in Europe has not peaked yet and may be about to accelerate in Germany and elsewhere. 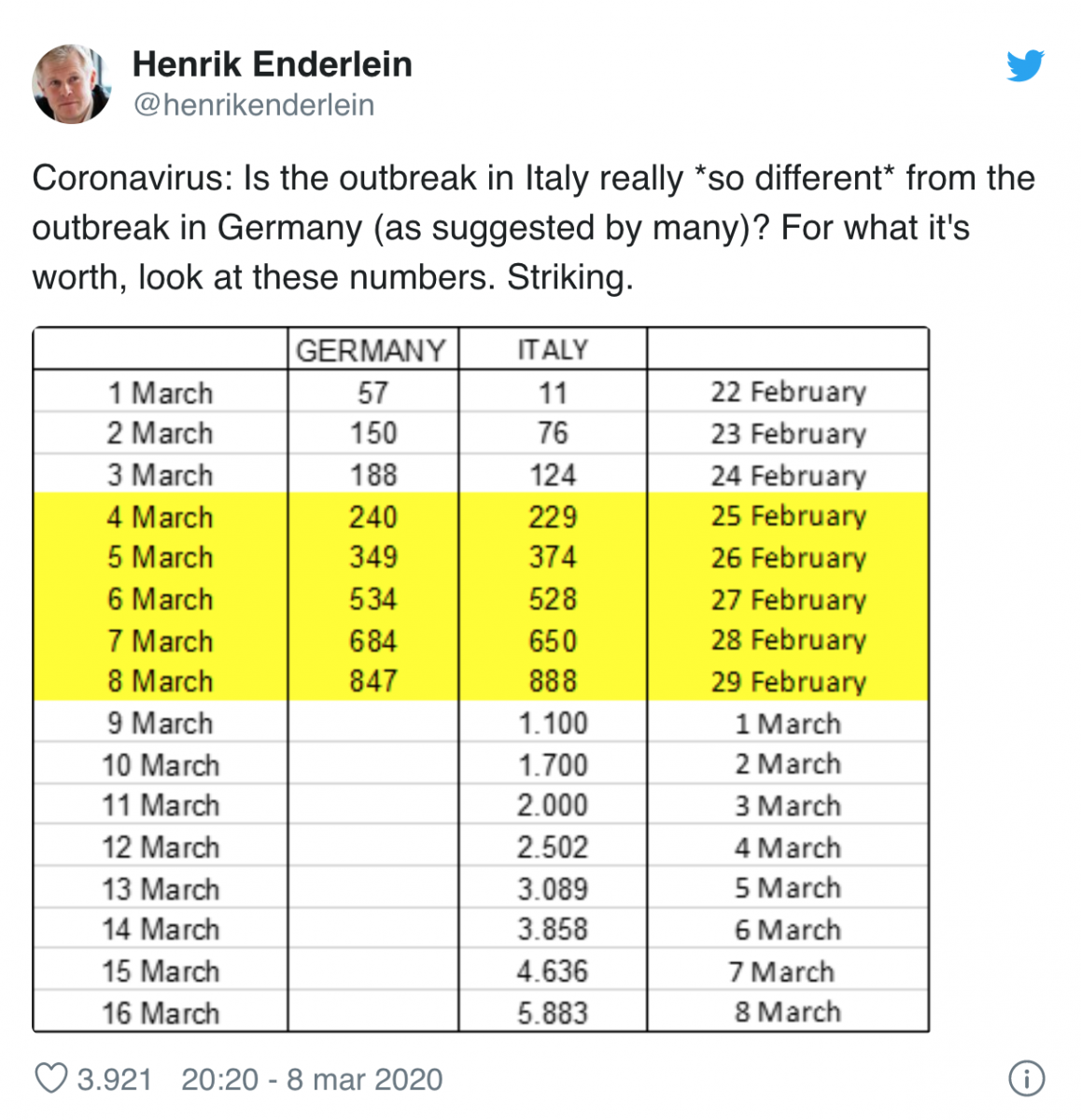 Thanks to a subscriber for this graphic from Henrik Enderlein’s Twitter account. If accurate it suggests the outbreak in Germany is about to get a lot worse.