The Reserve Bank of Australia will probably scrap its bond-buying program at the first meeting of 2022, as a strengthening economic recovery suggests the additional stimulus measure is no longer needed.

All but one of 17 analysts polled by Bloomberg expect the RBA will end quantitative easing at its Feb. 1 meeting. The outlier, HSBC Holdings Plc’s Paul Bloxham, sees a taper to A$1 billion from the current A$4 billion ($2.9 billion) weekly pace and the program concluding in May.

Just last month, economists were divided on the future of QE, with six of 14 surveyed expecting a tapering. Since then, better-than-expected data on consumer spending and employment, as well as faster inflation, have bolstered market confidence in the strength of the $1.5 trillion economy. That prompted Westpac Banking Corp. among others to change their views on bond purchases.

“The string of strong data prints now means the RBA’s dovish stance is untenable,” said Prashant Newnaha, Singapore-based senior Asia-Pacific rates strategist at TD Securities. “With a rather clear case that the RBA is making progress towards its goals of full employment and inflation, it will need to re-write the policy narrative.”

The RBA, in minutes of its last meeting of 2021 released on Dec. 21, said its central economic forecast supported tapering the bond purchases. The bank releases updated estimates on Feb. 4 that are likely to see an upgraded outlook for unemployment and inflation.

TD’s Newnaha expects the RBA’s central forecast to now be for a rate increase in 2023, though the bank will “possibly open the door to a rate hike in 2022.”

The question of what to do about rising inflation is a topic facing every central bank. The answer is complicated by the presence of significant leverage and accumulated debts in different parts of the economy. If central banks raise rates too quickly some of those debts will run into trouble like we have seen with China’s property developers. That was admittedly an intentional act, the overleverage is not limited to China.

Australia has unique advantages in terms of massive resource wealth, a highly educated population, and an innovative tech/healthcare sector. It also has some of the highest consumer debt ratios in the world. That effectively limits how much the RBA can safely raise rates. That’s how debt traps are made and Australia is just one of a host of countries looking at the same disconnect. 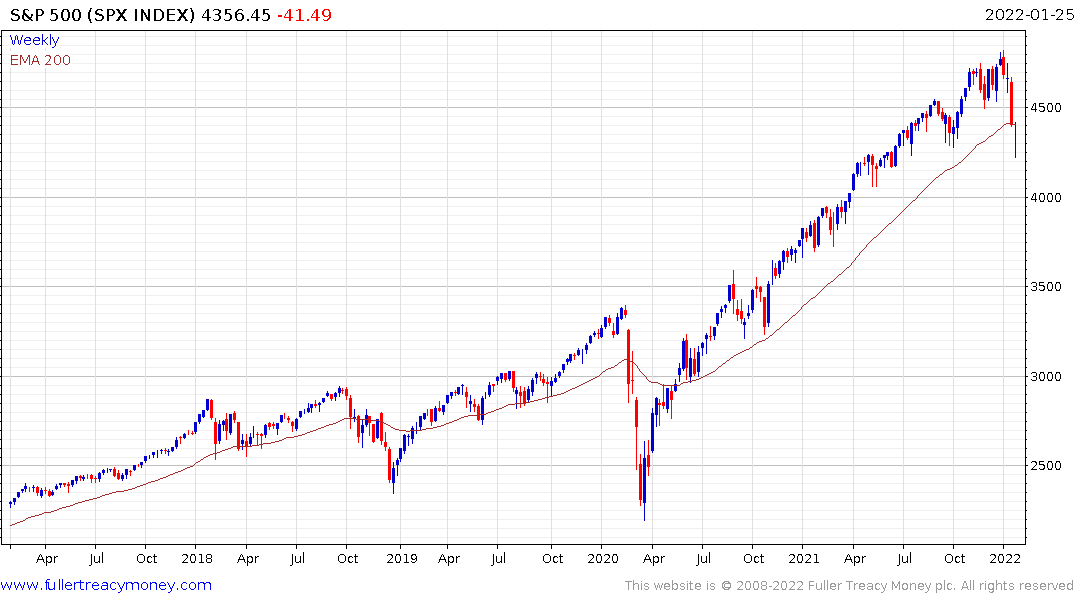 Since the primary fear is related to the potential for rising rates, the presence of debt traps moderates that short-term risk and exacerbates the long-term risk. The climactic action we saw on most indices yesterday suggests was improved upon by Wall Street today after a rocky start and that should feed through into global markets tomorrow. 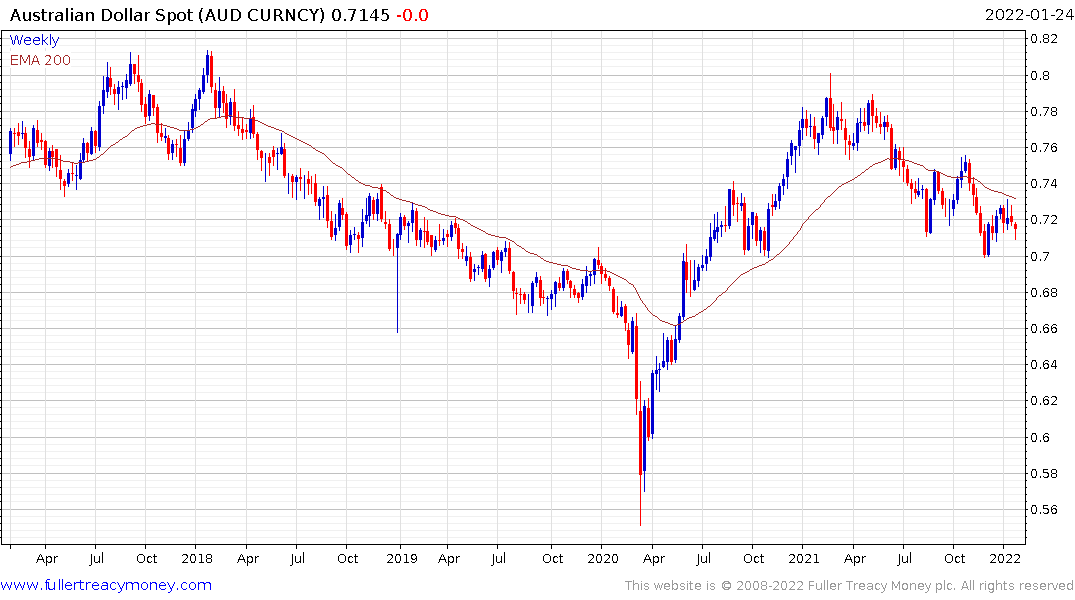 The Australian Dollar continues to firm from the 70₵ level. A sustained move above 73₵ will be required to break the yearlong sequence of lower rally highs and signal a return to medium-term demand dominance. 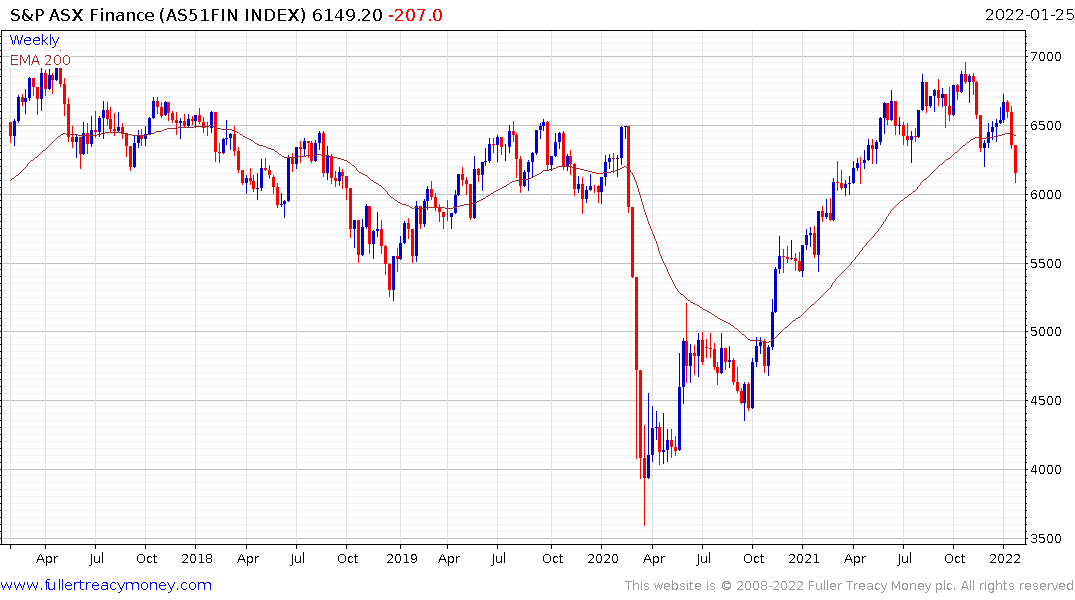 The S&P/ASX Financial Index has led on the downside. It posted a lower high at the beginning of the year and moved to a new low today. At a minimum, it will need to sustain a move above 6750 to confirm a return to demand dominance. 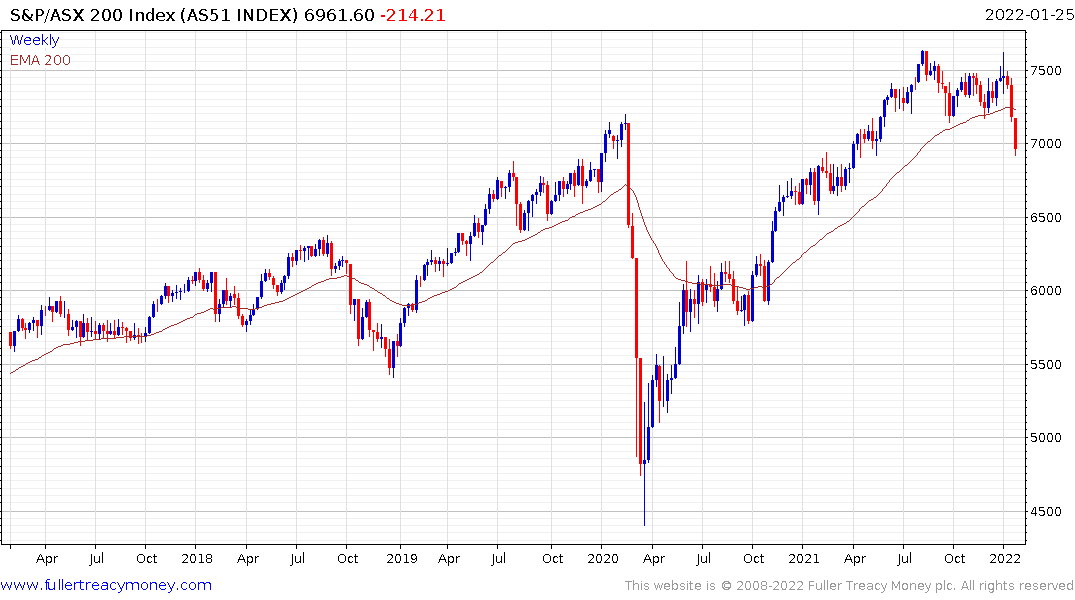 The $&P/ASX 200 broke lower today in sympathy with global markets. It should bounce tomorrow with the steadier action on Wall Street.

This is quite typical following a massive reaction against the prevailing trend Type-2 top. A period of ranging is likely and then the major indices will need to push up successfully into their overhead ranges to confirm a low of more than short-term significance.