“But if demand growth is not sufficient, the board is prepared to provide additional support by easing monetary policy further,” he said. “Whether or not further monetary easing is needed, it is reasonable to expect an extended period of low interest rates. On current projections, it will be some time before inflation is comfortably back within the target range.”

Lowe’s speech, which made the case for maintaining the RBA’s current policy framework despite prolonged low inflation, was his most explicit that further easing remains on the table. The Reserve Bank cut rates in June and July to a record low of 1% and signaled at the time that it would wait to see how the easing filtered through the economy.

Since then, consumer confidence has actually fallen and the currency has risen -- the latter due to an easing bias among major central banks -- in contrast to RBA’s hopes. Indeed, the Federal Reserve is expected to cut as soon as next week. Westpac Banking Corp. Chief Economist Bill Evans on Wednesday predicted Lowe and co. would cut in October and February to push the cash rate to 0.5%.

Australia’s administration is attempting to forestall the decline in domestic property prices by cutting interest rates, embarking on an aggressive fiscal stimulus and implementing direct supports for the property market.

Like so many other regions, there is a significant belly in the Australian yield curve with short-term rates yielding more than everything out to about 8-year maturities. That suggests the bond market is pricing in a rapid pace of rate cuts over the coming year. 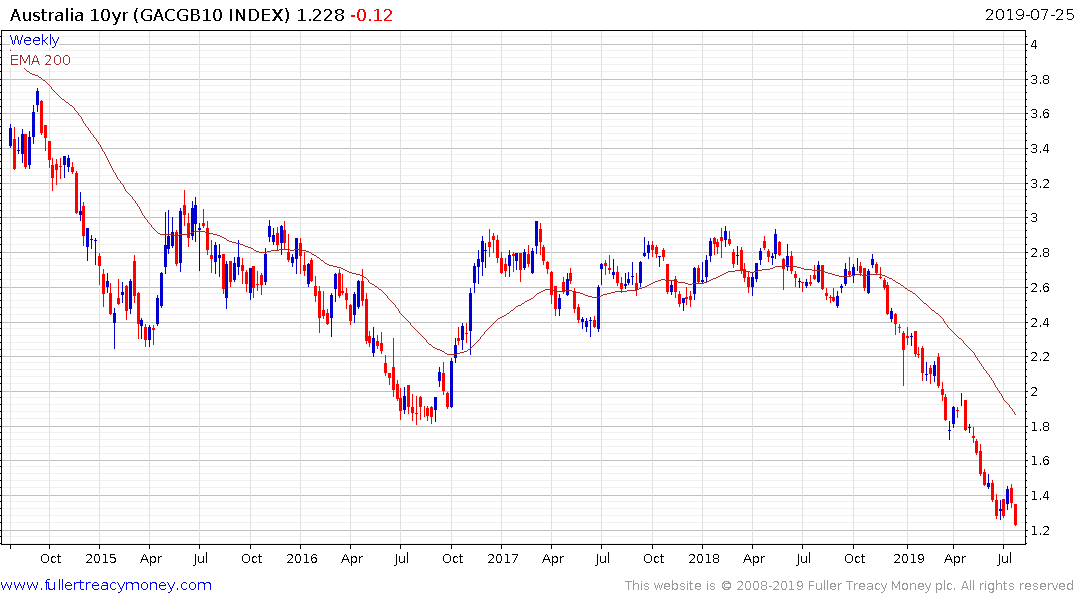 The downtrend is 10-year yields remains in place with a new low posted today. A break in the sequence of lower rally highs would be required to begin to question the consistency of the decline. With the outlook for interest rates, and the weakness in the domestic economy, the odds of Australia being the next developed market to explore negative yields is rising. 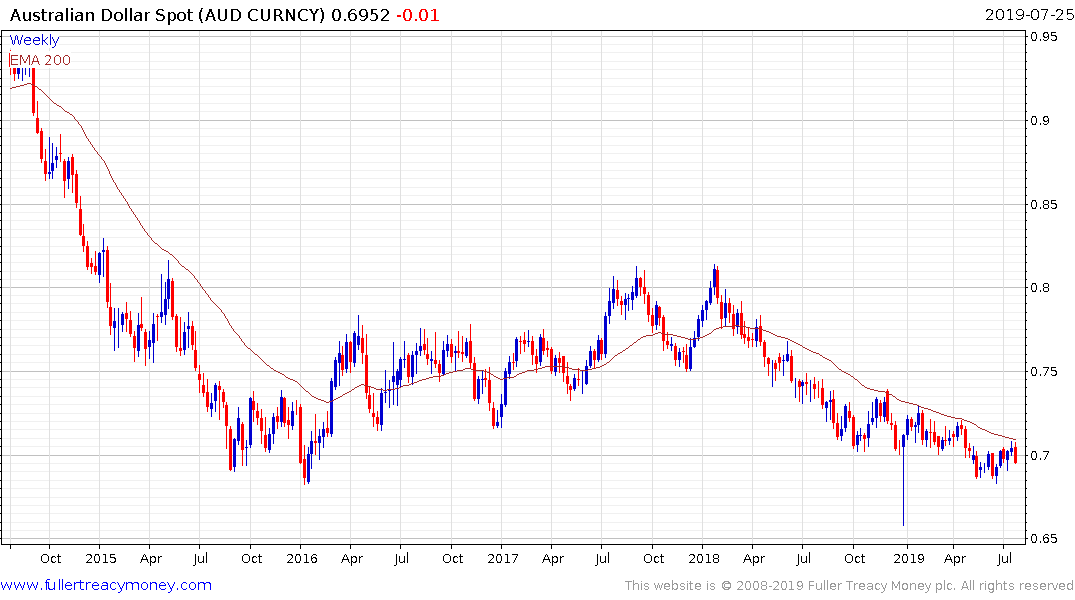 That is putting downward pressure on the Australian Dollar which remains in a consistent decline; where it has encountered resistance in the region of the trend mean on successive occasions. 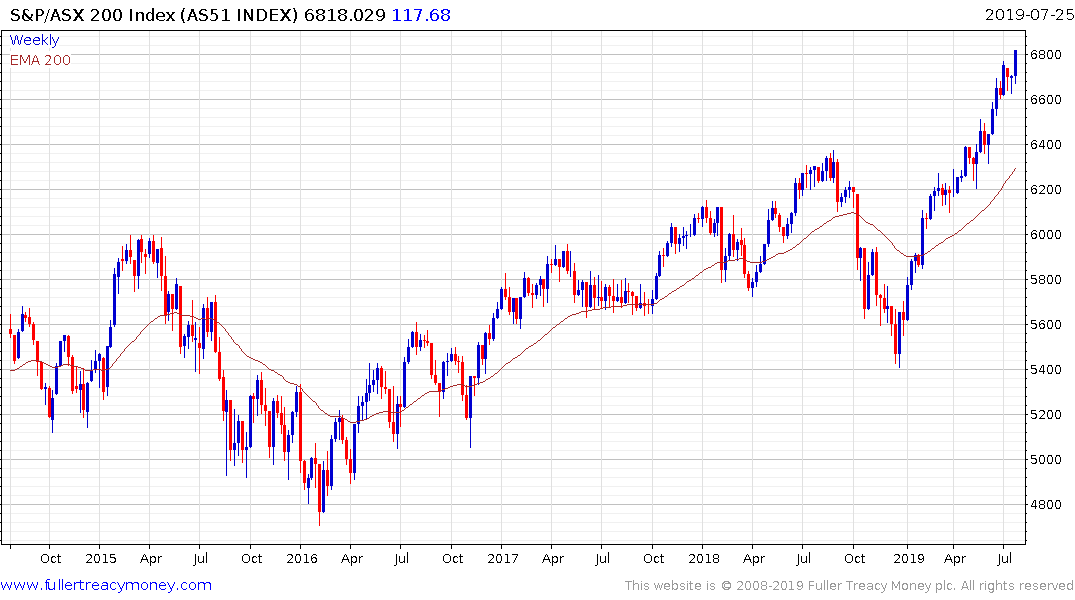 The stock market continues to respond favourably to the surge in liquidity. The S&P/ASX 200 moved to a new all-time closing high today and continues to hold its short-term progression of higher reaction lows. With an increasingly wide overextension relative to the trend mean, a break in that sequence will likely  signal a reversionary process is underway. 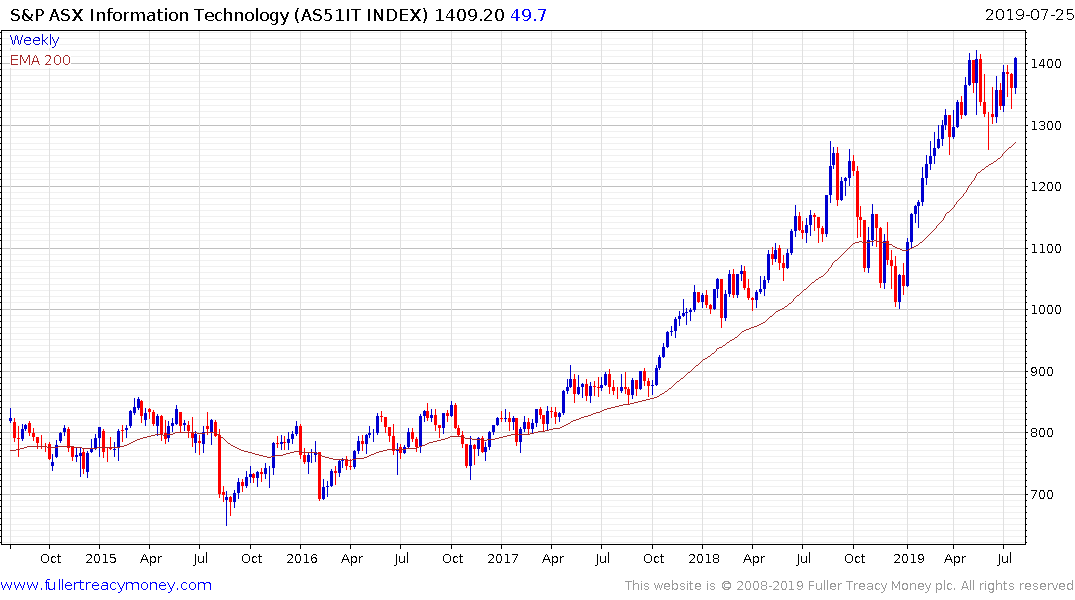 The S&P/ASX Information Technology Index has been the clear outperformer this year.