The Brazilian real’s outperformance hints at investors’ pragmatic stance toward the currency, which may have further room to appreciate despite potential diplomatic frictions with a Biden White House.

BRL rose 3.2% over the last two sessions, by far the best performance among all major currencies. That may sound strange given Joe Biden’s comments on potential sanctions on the country due to deforestation and Brazilian President Jair Bolsonaro’s clear alliance with Trump, but traders are working with the information they have at hand now instead of making assumptions about what will happen in the future.

A Biden presidency improves chances of stimulus in the near future even with a GOP-controlled Senate. That has prompted bets that the dollar is prone to weaken and the currency that seems to have most room for a quick swing is the Brazilian real. The currency is the most depreciated major currency in the world this year, even after this week’s gains. Brazil faces fiscal pressure with debt-to-GDP ratio expected to rise beyond 100% this year, but the fundamental issues are local and not external. With more dollars available, the temptation to bet on the recovery of a country that has shown robust activity data is just too high.

Investors will keep a close eye on Brazil’s budget challenges and the government’s maneuvers to finance itself. Concern about Brazil’s relationship with U.S. under a potential Biden government may grow in relevance, but only in the middle of next year.

The determination of governments everywhere to spur reflation in 2021 is probably a more significant factor than geopolitics for most commodity producers. Australia’s brewing dispute with China is an obvious counter example, but even then, China still needs what Australia exports. Global infrastructure development is likely to play a vital role in the plans of most countries to boost employment and stimulate growth. That’s a major commodity demand growth trend which is taking place against a background of meagre investments in additional supply. 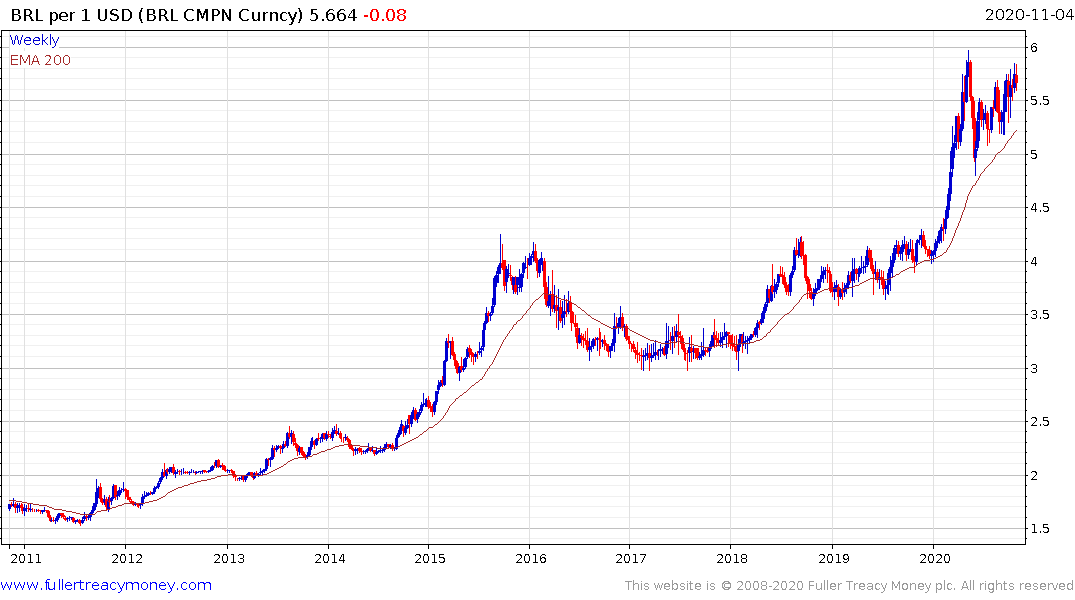 The Brazilian Real is firming from the region of the May lows and will need to sustained move below BRL5.2 to confirm a change of trend. 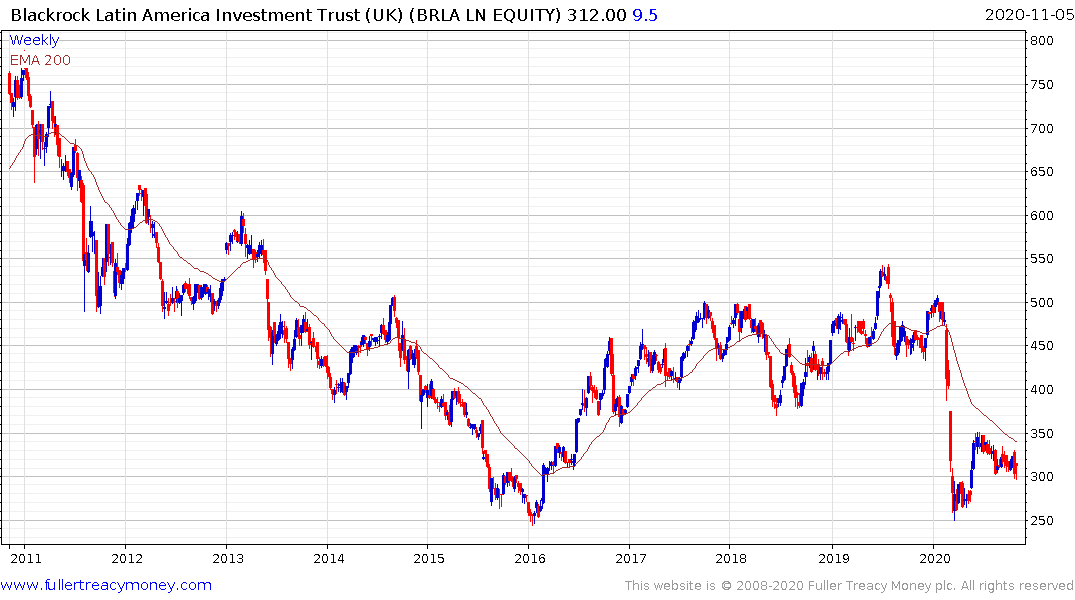 The currency’s deprecation has taken a heavily toll on investment returns for foreign investors over the last decade but if the currency continues to steady that may be a catalyst for renewed interest. The Blackrock Latin American Investment Trust is trading at an 8.8% discount to NAV and is firming from the region of the lows posted in the 2015/16 and earlier this year. 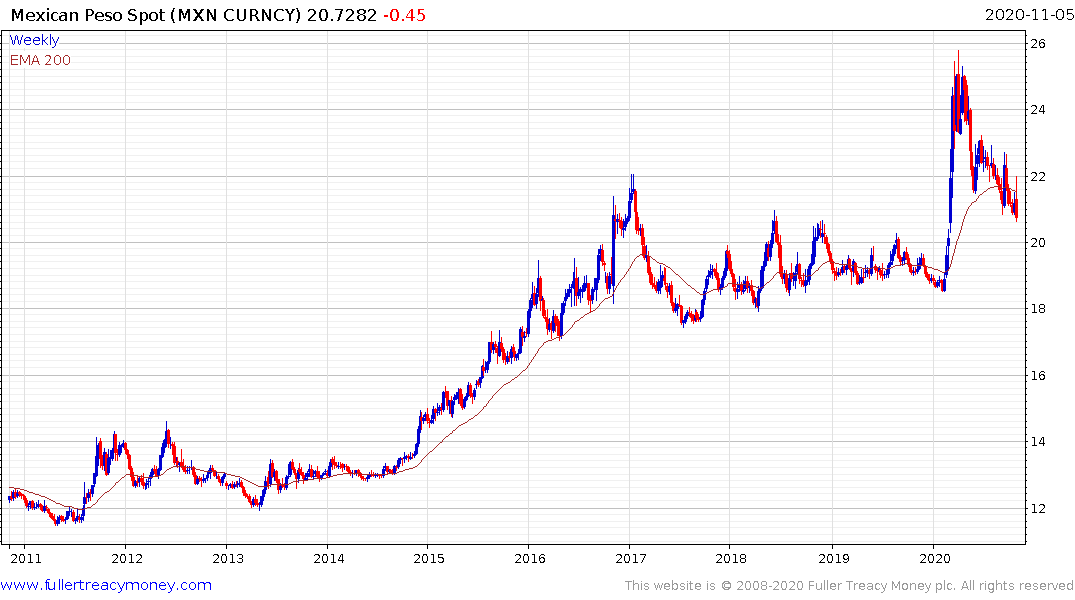 The Mexican Peso has already firmed through its 200-day MA and is rallied approaching the MXN20 area which has been an area of previous support. A sustained move through that level would confirm a return to medium-term demand dominance. 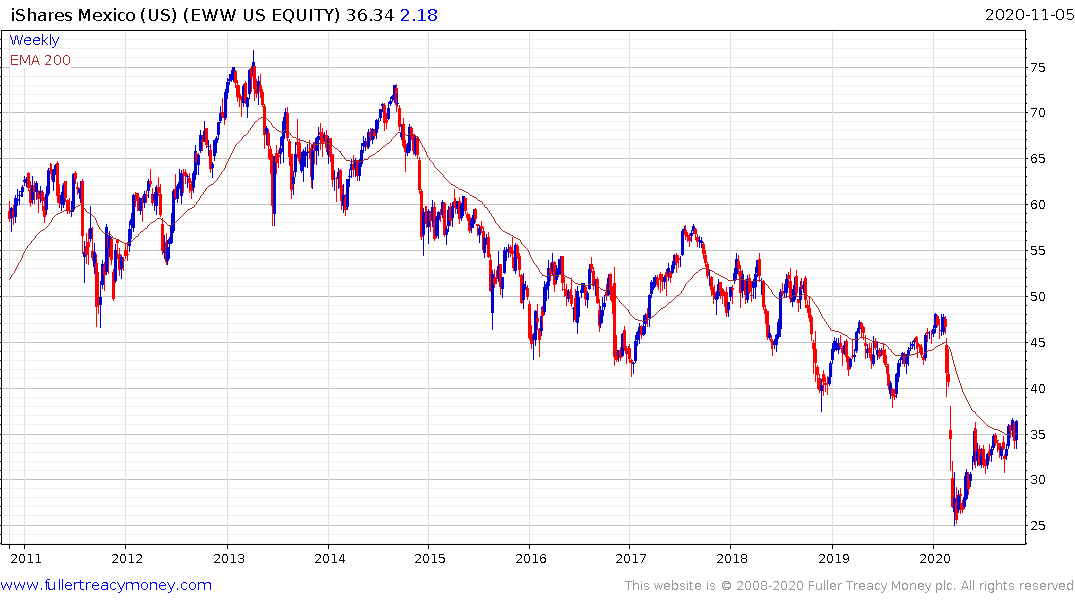 The iShares MSCI Mexico ETF has held a sequence of higher reaction lows since March and is currently firming from the region of the trend mean. 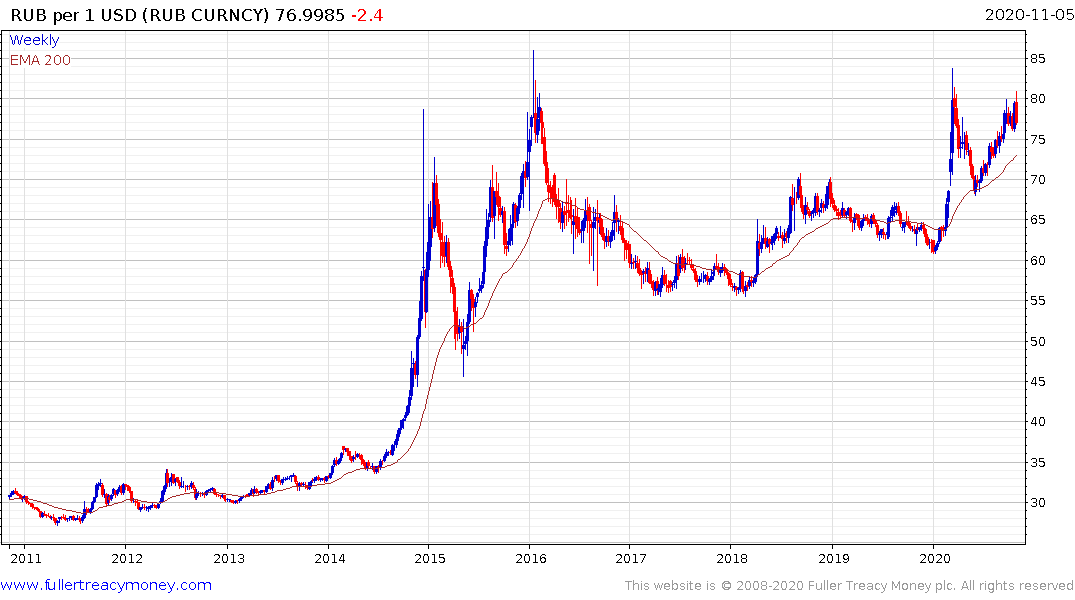 The Russian Ruble could arguably be more susceptible to geopolitical tensions than most other currencies but it is firmed from the region of the four-year lows. 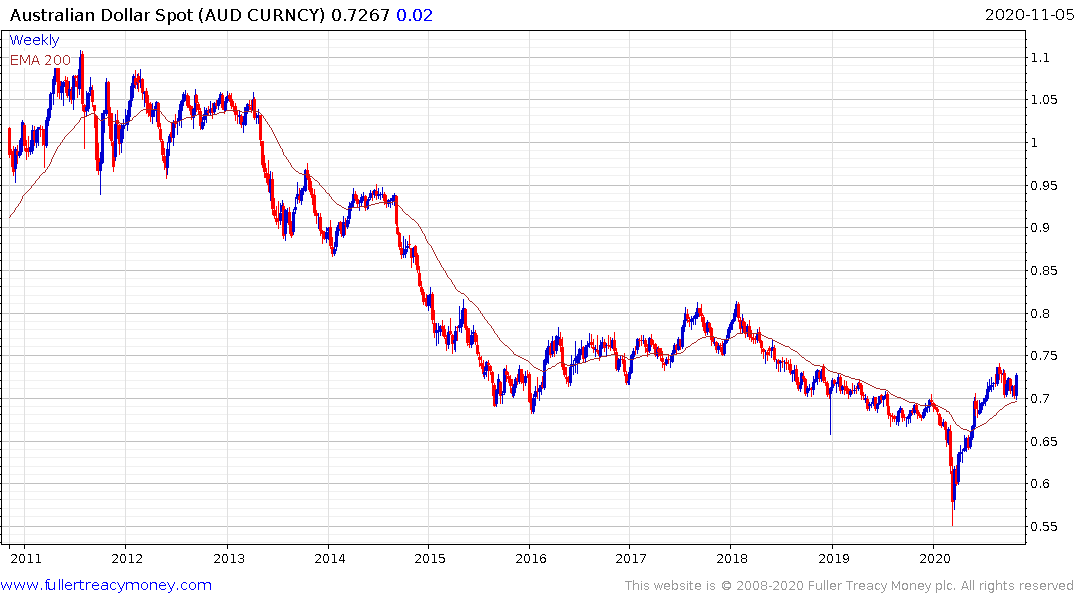 The Australian Dollar has been leading the way higher for commodity currencies and continues to extend its rebound from the 70¢ area. 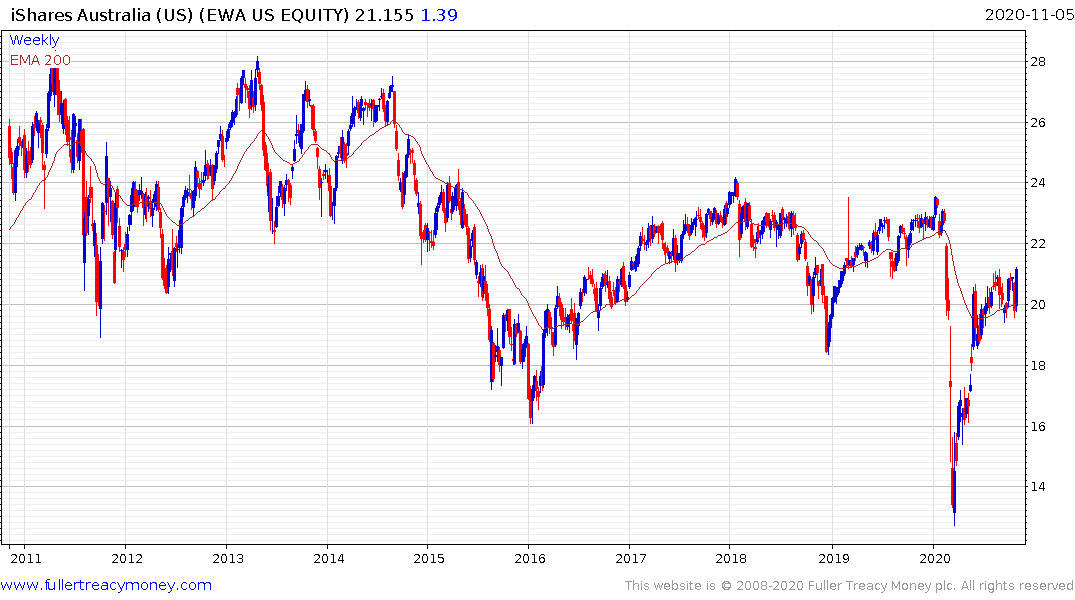 The iShares MSCI Australia ETF has been ranging in a volatile manner for 12 years. It is currently firming from the region of the trend mean. 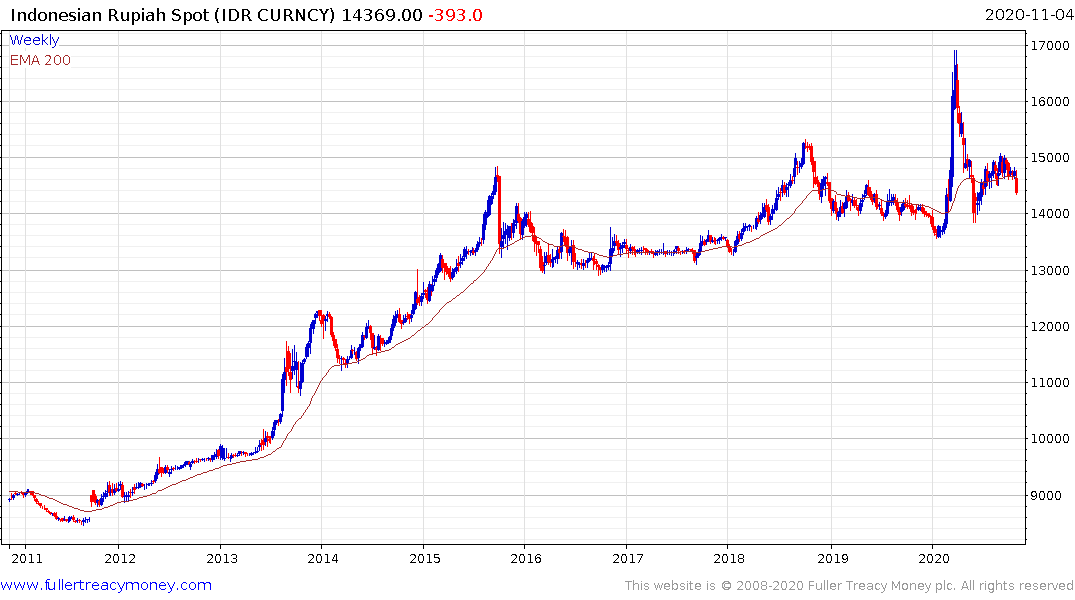 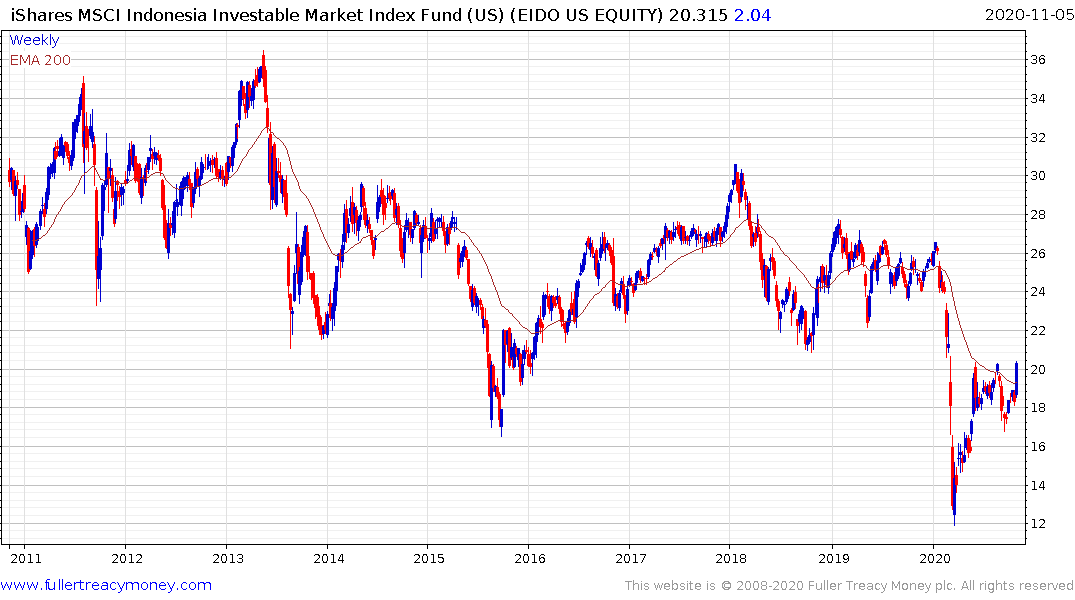 The Indonesian Rupiah strengthened through its trend mean today to hit a recovery high. That aided the rebound in the iShares MSCI Indonesia ETF which is firming from the region of the trend mean. 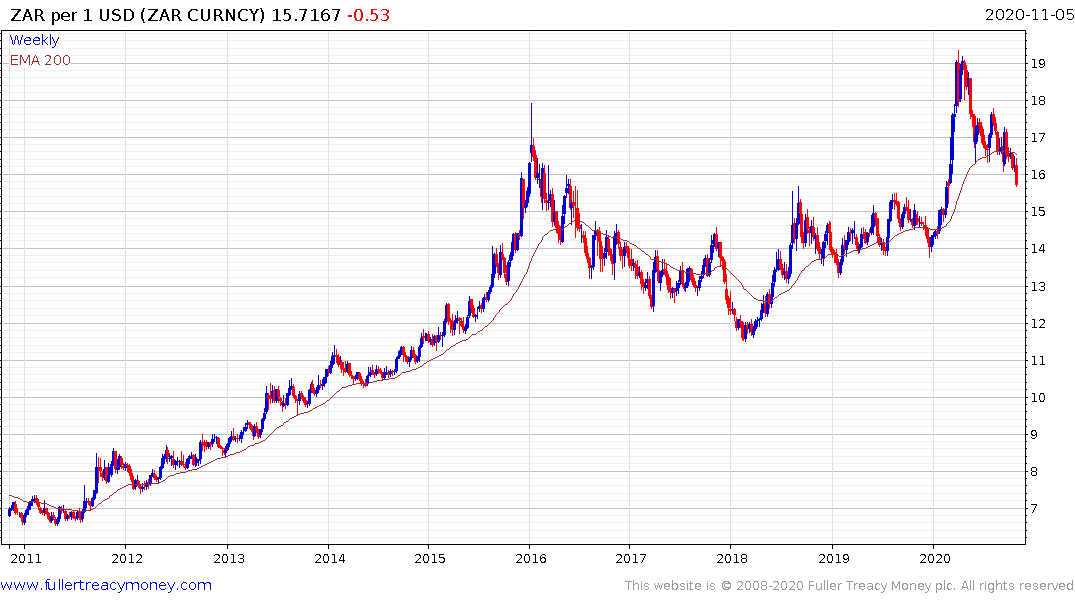 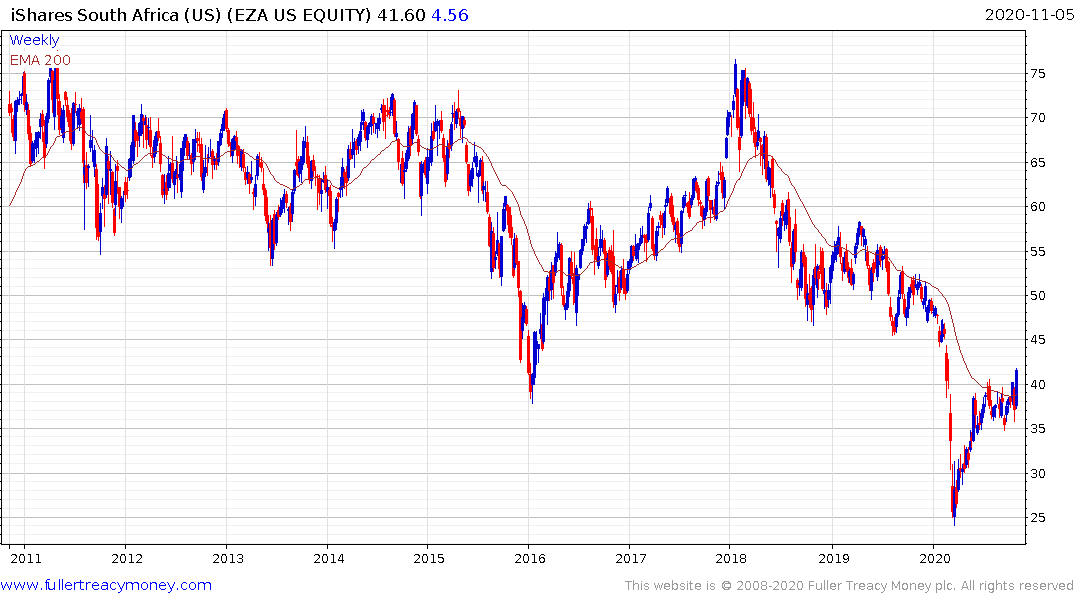 The South African Rand rallied through the ZAR 16 area today and the iShares MSCI South Africa ETF broke out on the upside.