“We have to sell a lot of Treasury bonds, and we as Americans won’t be able to buy all those Treasury bonds,” Dalio said. That means foreign investors will have to step up. And they probably would, as long as the dollar remains strong.

Otherwise, Treasury’s dollar-denominated interest payments to buyers in China, Europe and Japan will be worth less and less.

But, to Dalio, that’s not going to happen. “The Federal Reserve at that point will have to print more money to make up for the deficit, have to monetize more and that’ll cause a depreciation in the value of the dollar,” he said. Pressed by interviewer Erik Schatzker, he said “you easily could have a 30 percent depreciation in the dollar through that period of time.” For context, the Bloomberg Dollar Spot Index fell 8.5 percent in 2017, and that was considered massive.

“We have the privileged position of being able to borrow in our own currency because we have the world's leading reserve currency. We are risking that by our finances — in other words, borrowing too much.”

Unfunded liabilities are not only a US problem but are something that governments right across the OECD will need to eventually address. Ray Dalio’s view that the rise in populism we are seeing today is a symptom of a wider problem gels with my own. Considering we are seeing this disaffection with the status quo during an economic expansion where unemployment is low, it is likely that the jump to the fringes of the political spectrum will only intensify during a recession. 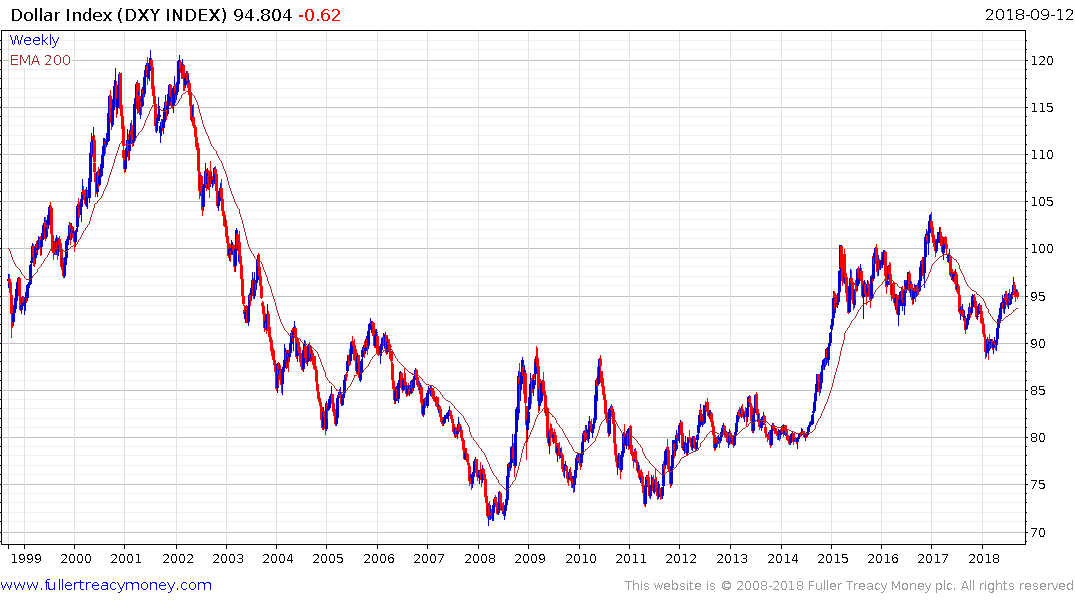 One of the primary reasons the US Dollar is the world’s reserve currency is because the USA is willing to run deficits and flood the global economy with supply. It is that liquidity and the size of the economy together with the world’s most impressive military that ensure it is the reserve currency. In two years, it is arguable whether there will be an alternative.

During the first round of quantitative easing the Dollar fell by 18% and commodities prices hit new highs because of China’s stimulus package and synchronised global monetary expansion. Arguably, China is now running counter cyclical policy which will give it the wherewithal to stimulate when the USA’s fiscal stimulus eventually runs its course. The willingness of the Chinese administration to do so when the global economy wobbles will be a major potential catalyst.

The US debt to GDP ratio is currently around 100% and Japan’s is closer to 250%. It is certainly true that the incremental benefit of each additional dollar of quantitative easing is reduced because of inflating asset prices. 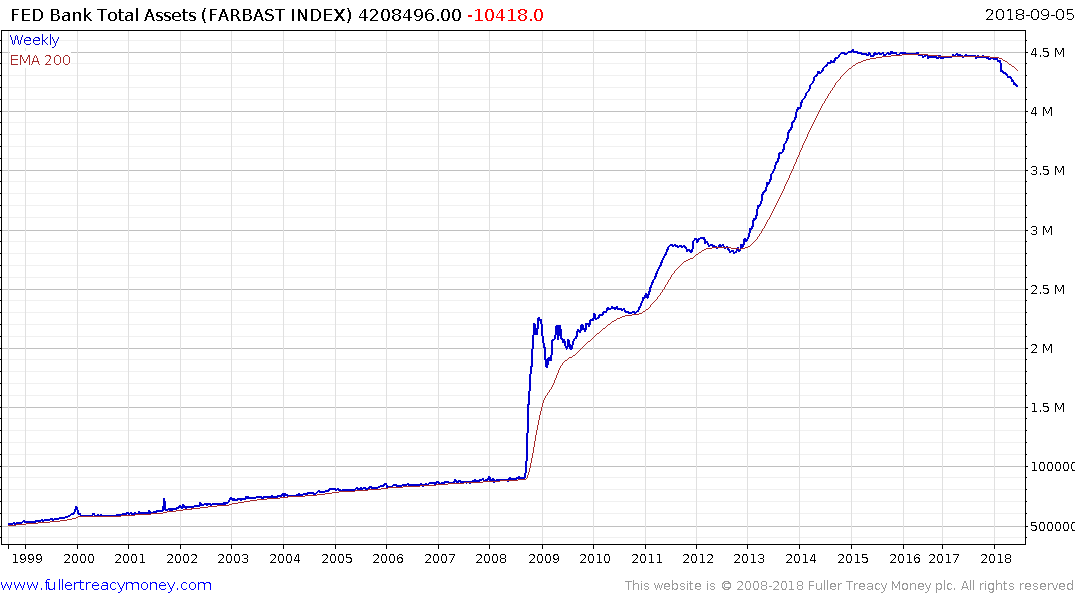 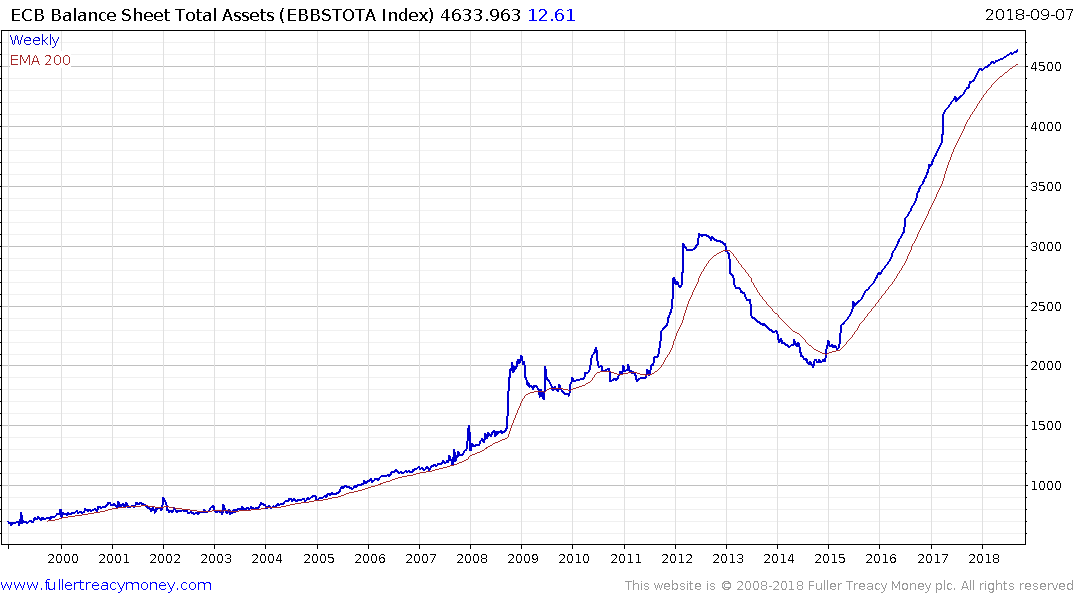 The first QE package saw the Fed’s Balance expand by 144%. QE2 was on 28% but QE3 was 58%. When the ECB engaged in quantitative easing its first program saw the size of its balance sheet increase by 63%. When it withdrew that stimulus, the deflationary forces unleashed required a 131% expansion in the balance sheet during the subsequent QE program. 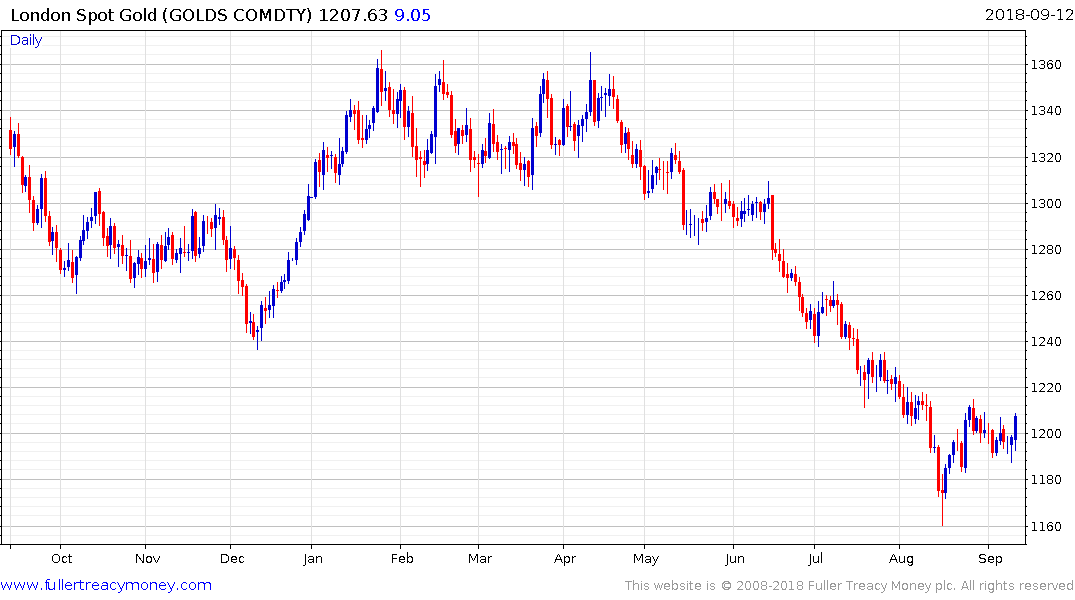 If the debt issues Dalio predicts do in fact arise, then monetisation of the debt is inevitable and the size of the Fed’s balance sheet could more than double to $10 trillion. That would have a knock-on effect for the Dollar, the magnitude of which would depend on the actions of other central banks.
Meanwhile gold popped back above $1200 today. Upside follow through tomorrow would break the five-month progression of lower rally highs. 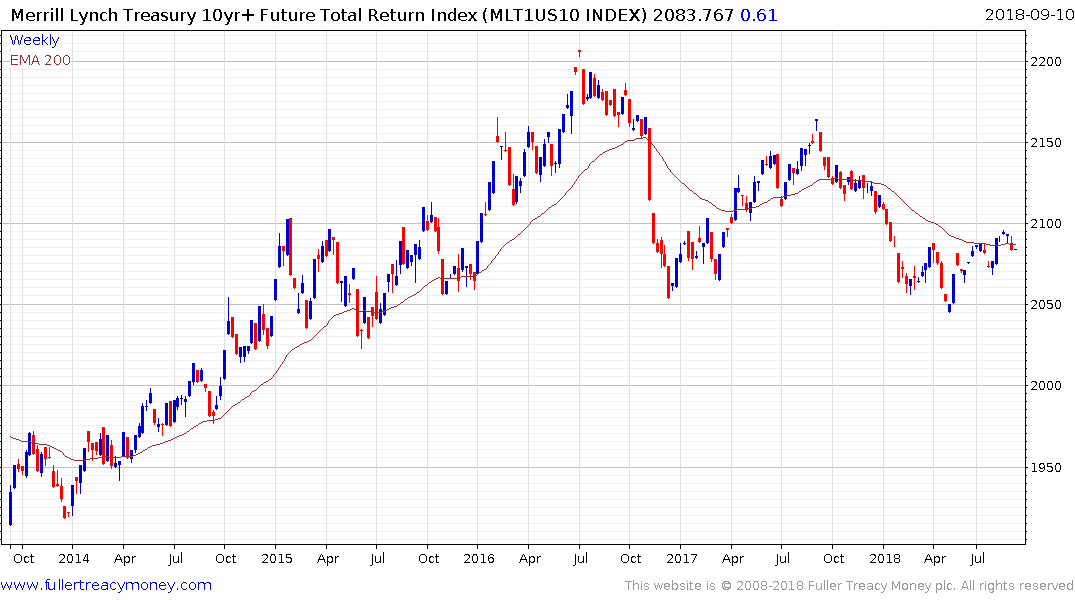 The Merrill Lynch 10-year Treasury Futures Total Return Index has held a progression of lower rally highs since 2016 and encountered resistance near the trend mean over the last couple of weeks. The broad pattern from 2015 has Type-3 top formation characteristics and a sustained move back above 2100 would be required to begin to question that conclusion.